Today we had an easy day. Started with a visit to the German History Museum. It’s the finest museum I have seen in my life. I just hope we had more time. Many museums are now made as architecturally stunning buildings, think the Tate Modern, think the Guggenheim in Bilbao, think the Rock & Roll Hall of Fame in Cleveland, think the new one in Singapore. This one was a huge 1960 era communist style unattractive building. But my God what a museum. Every boys dream. Planes, cars, boats, plastics, electronics, paint, paper, textiles, plastic, ceramics everything you can think of from modern times. The history of aviation from Wright Brothers to the modern day jumbos. Electricity in action. Textiles from Gandhi’s spinning wheel to the modern computer controlled mammoths. Absolutely fascinating. It was nice to go to a museum that was not full of derelict busts and urns from the Neolithic period. Really absorbing museum. It also has one of the finest most modern planetariums but we just had no time. The show was in German so we were a bit handicapped even if we had the time. Top class museum fully recommended and a trip to Munich is a must. The museum has two branches on the outskirts one a car museum and the other a boat museum.
On the way back, we stopped at a fascinating store. A maggi kitchen store. All Maggi products sold here and food too. All the food is cooked with Maggi products so you have pasta cooked with Maggi alfredo sauce and so on. We bought some Hollandaise Sauce prepared in a tetrapak. Should be great with some asparagus.
Then we had a quick pick up lunch. A sausage with mustard for me and a pickled herring in bread [with onion removed] for Arti. Then a walk to Munich’s largest department store. It was huge with a huge variety of stuff. At last we found some spatulas we have been looking for.
Looking at the strawberries we picked up a punnet at a staggering price. The seller assured us that these were German, the best in the world. I thought that the English were the best. However, Deutschland uber alles, as the phrase goes. These were really good. Sweet, not tart and large with a good aroma. Having them for desert.
Now for dinner. We went across to a grilled sausage speciality restaurant. It was the cheapest we have gone to. Disappointing, the food we uncaring and careless. However, no one hustled us to order and get going.
We shall eat on in Heidelberg. 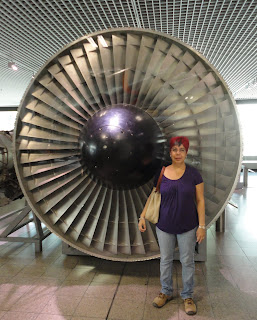 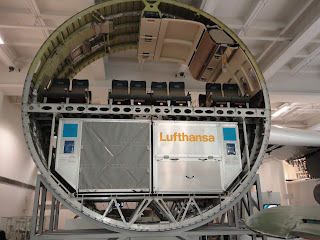 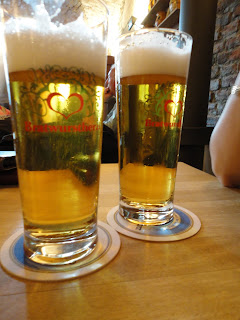 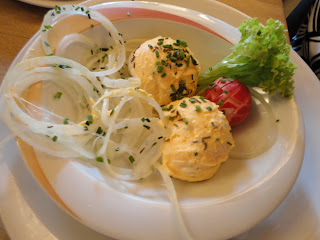 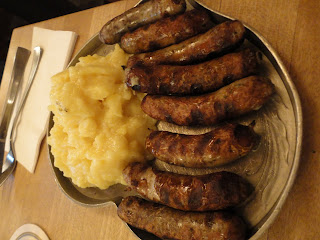 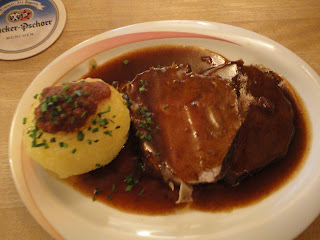 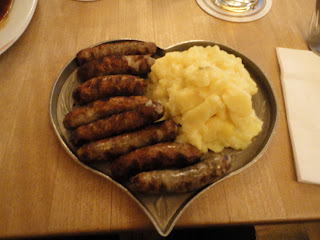 Posted by Stonethrowers Rants at 5:08 PM