This is a post about two meals we had at J Sheekey, an old fish, seafood and oyster restaurant in the theater district of London.

J Sheekey belongs to the Caprice Group which owns and runs several high end restaurants both in the UK as well as in the Gulf. Among the restaurants in their stable are the Ivy and Scotts in both London and Dubai, Annabels the famous nightclub in London, the Mount Street Deli, Rivington in Dubai and several others

As always we had made our bookings weeks in advance as its impossible to get a table with short notice at a time you want. J Sheekey Restaurant seats 110 people and most evenings they turn around 3 times. Once pre theatre, once at normal dinner time and once post theatre. So that is at least 330 people every evening in just the restaurant! Add to that number, lunch and those in the Oyster Bar. All this is in high end food and dining.

It has a very men’s club feel to it and is frequented by an older, and consequently, moneyed crowd. Lots of Americans also come here. The food is unashamedly seafood though, you can request a meat menu. Though the dress code says a tie is not required, most people do wear suits. Photography was prohibited in the restaurant, but on asking, and promising that we would only photograph the food, we were happily given permission.

We were early, having miscalculated the time it would take to get there, but, we got a table. It was a corner table. HRH the Queen of Kutch was very cross and asked the Maitre 'D to change the table. Request was granted and we were seated at a better and larger table. A glass each of Prosecco along with a bottle of still water were requested while we decided on what to eat.

A special of the day was a Shellfish Cocktail with Lobster. This was a variation of the Prawn Cocktail except with Shellfish and Lobster. I wanted to get this. HRH the Queen of Kutch ordered Dressed Crab. The Shellfish Cocktail was excellent. The Lobster was chunky and mixed with shredded Lettuce with a good Marie Rose sauce. I was a bit worried about getting loads of the sauce, but happily, there was no overdose of sauce. Very tasty and, oddly, refreshing. Wonderful.

The Dressed Crab was a large portion. The plate was garnished with some Crustaceans Oil and Paprika and the Crab was served with some Wholegrain Toast. This was, she pronounced, a very tasty dish. I had a few forkfuls and agreed. Tasted very nice with the Toast.


Starters being done, we ordered a bottle of Muscadet 2011 from the Loire Valley. Nice wine. The Queen ordered the day's special for dinner. This was a Herb and Pancetta crusted Halibut Fillet. The Halibut was placed on a bed of Saffron Risotto and garnished with Roast Baby Leeks. The Sauce was a simple Veal Jus.  This was as attractive to look at as it was delicious to eat. What a simple concept. What was amazing was that, as we have seen abroad, the fish was brilliantly cooked. The Fish was not murdered and dried out. Why oh why can we not murder fish in India?

I like a good fish and chips. So I got myself a Haddock with some Mushy Peas and Chips. A nice golden crunchy batter coated my Haddock. I cut it open to let the steam escape and not make the crust soggy, added lashings of Vinegar and dug in. Bliss!! Wonderfully moist and flaky fish, crisp crunchy batter. The chips were good too and the accompanying Tartare Sauce was wonderful. The Mushy Peas were, peas, sweet peas and not the dried peas you often get. Top class dish.

For dessert HRH the Queen ordered a Hazelnut Praline Chocolate Bombe. This consisted of a hollow sphere of top quality Virunga Chocolate. Inside the sphere was Honeycomb Ice Cream. The waiter brought a small jug of hot Chocolate Sauce and poured the Sauce on the Chocolate Sphere which melted the sphere and the sauce mixed with the Ice Cream inside. Excellent dessert. Good quality chocolate that tasted of chocolate and was not just over sweetened chocolate compound. A very chocolatey dessert which, if you like chocolate, is heavenly.


My dessert was less spectacular. A simple chocolate base with Hazlenut Ice Cream and Hazlenut Brittle [Chikki to you and me] all topped with Chocolate Sauce. Wonderful.

The meal had alas ended. A great meal from start to finish, ok, except for the table we were first offered. We collected our coats and walked into the cool London night. It was drizziling, so we hailed a cab and were soon home.

Below is a blog I wrote some time ago about a meal we had at J Sheekey. All those items are still on the menu. Have a  read to see how little changes in a restaurant over time. It was good then and is good now. I am sure J Sheekey will be good for many years to come.

To start the Queen had a Baked Smoked Haddock Tart with Quail Eggs while I had Gravalax with Marinated Cucumber and Swedish Mayonnaise. The Tart was an absolute monster in taste, loud, brash and delicious. The tart base was puff pastry and was light and flaky. My Gravalax was, by contrast, petite in taste and flavour, subtle and gentle would be the correct adjectives to describe this.


Main courses presented a problem. So much looked attractive. The Queen settled for Pan Fried Slip Soles with Nut Butter and Capers with a side order of Green Beans after contemplating a Fillet of Monkfish with Coco Beans, Pork Belly and Salsa Verde. I toyed between a Shrimp and Scallop Burger and a Fish Pie, which is what I settled on. The order taker cautioned the Queen that her fish came on the bone, which she had no problem with, and since I had Salmon as a starter, my Fish Pie contained Salmon too. Both dishes excellent, as can be evidenced by the two skeletons on the Queen’s plate. My fish pie was luscious. All this was washed down with a glass of Champagne and a bottle of Tavel 2009 Chateau d’Aqueria from the Rhone Valley, a Rose. All in all a very good meal in very nice surroundings and with great atmosphere. 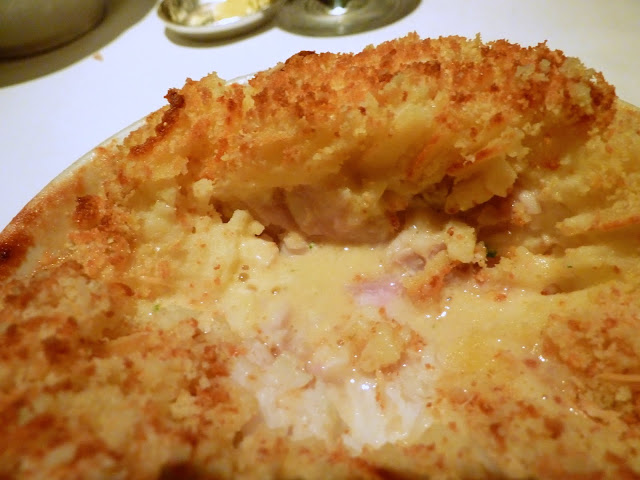 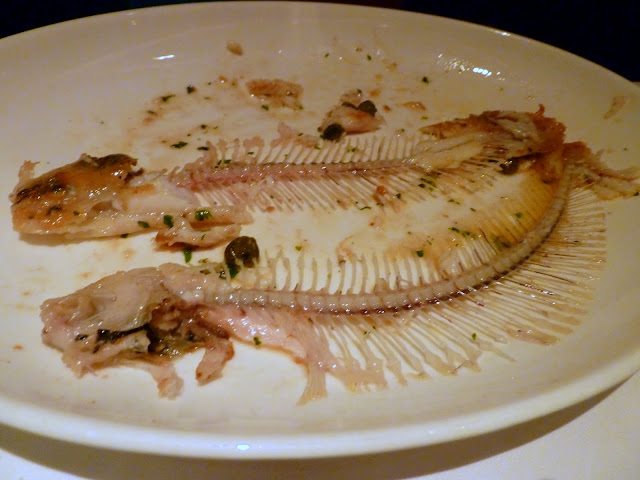 Posted by Stonethrowers Rants at 3:17 PM