Strasbourg is well known for it’s food and drink. You can eat and drink very well, with large portions and at a reasonable cost. We had no intention of any fine dining in Strasbourg as the local food would be far more interesting for us. So, folks, it was generally `peasant’ food, meat and potatoes kind of stuff.

As far as food is concerned Alsace is a total winner. The most famous dish from here is the Quiche Lorraine, as far as I am concerned, the king of Quiches. Mind you the real Quiche Loraine does not have cheese, simply egg custard and bacon in a tart base. The Onion Tart is also very famous. Being part of France and Germany successively, Choucroute [in French] or Sauerkraut [in German] which is pickled cabbage is garnished with a variety of pork products. You can get as few as 1 to as many as 10 on a plate as garnish. The correct name of the dish is Choucroute Garnis. You get a heap of the cabbage, a couple of boiled potato and the pork – sausage, garlic sausage, pork belly, pork loin, liver dumpling and so on and so forth. A Coq Au Vin is made with Riesling instead of the red wine. Massive Pork Knuckles either boiled or baked with crisp skin are another favourite, eaten with delicious fried potato either chips or sauté potato.

The popular snack is much like a pizza except much thinner, it is called a Flammekueche—also known as a Tarte Flambée. The topping has no tomatoes. A traditional Flammekueche is simply topped with cream cheese, chopped onions and lardons, tiny pieces of smoked bacon. It’s then popped into the oven until the onions are cooked, the bacon crisp. I thought this dish was ridiculous, one of the most disappointing and foolish dishes I have eaten in a long time. The onion was to strong and the cream cheese too bland.

In short, the pig is a very important animal here. Almost all food revolves around a pig.

On peculiarity among restaurants was that all of them had several small blackboards – by small I mean about 18 inches wide and 24 inches high – on which the day’s specials were written. While ordering this board was placed on your table. Bit strange. In one restaurant we went to, a handwritten page was slipped into the menu. This seemed more like it. Mustard and freshly grated Horseradish were the condiments of choice. Most people ordered carafes of wine and not bottles. This was strange too as the carafes were filled from bottles. Anyway!!

Alsatian dogs do not come from here.

Two further observations. The restaurants we went to were very local, in fact in some even English translations were unavailable. Possibly, this is not tourist season as a result proportionately there were more locals eating at these places. There were certainly no Indians! The point I am making is that to me this seemed like locals eating typically local food in restaurants. At first I was surprised by this. Then I realised that most people do not cook like this at home anymore. This is much like seeing Maharashtrians eating at Gajalee or in the case of food like Tandoori Chicken or Kebabs in India where you simply cannot make that at home. Secondly, as I said earlier, portion sizes are large. But I was surprised at slim ladies far in excess of 65 polishing of the food. That was amusing to watch.

On the first night we were recommended a few restaurants by the Concierge. We narrowed our choice down to Chez Yvonne Winstub. A most charming old style place and, as we discovered later on further research, highly regarded even by locals. As soon as we sat down a small bowl of Terrine pieces was put down to have with our beer. For starters I ordered an Onion Tart while HRH the Queen of Kutch ordered a hot Foie Gras with a Plum Sauce. A carafe of white wine was ordered. The Onion Tart was decent, not in the least outstanding. I was mildly disappointed. The Foie Gras was excellent. Then it was time for the main course. HRH the Queen of Kutch ordered a Braised Pork Knuckle [braised in Amber Beer] with Sauté Potato  while I got myself a Choucroute. The food was absolutely top class. The Knuckle was literally falling apart while my Choucroute was a delight, a play on textures and cuts of Pork. No room for dessert.


The next night we had booked at Les Trois Chevaliers another seemingly fiercely local place. This was a very pretty restaurant. No one spoke any English and the apology of an English menu was a joke. So using broken French, some names of food from memory we manoeuvred our way thru the menu. This time tables were slightly turned, if you pardon the pun. I ordered a cold Foie Gras with Jelly and Jam while HRH the Queen ordered a local speciality a Cheese Salad with Sausage. The Foie Gras was good but something that I have had several times in the past, I should not have ordered it. The Cheese Salad was delicious and had a great dressing. For our mains, HRH the Queen ordered the Choucroute while I got myself a Veal Cordon Bleu with a Cream Sauce and Chips. Both dishes top notch. Heavy food but damn tasty. We shared a Chocolate Filled Profiteroles with Chocolate Sauce and Ice Cream. Oh yes, they do like squirting Cream from one of those aerosol dispensers to make things look pretty. 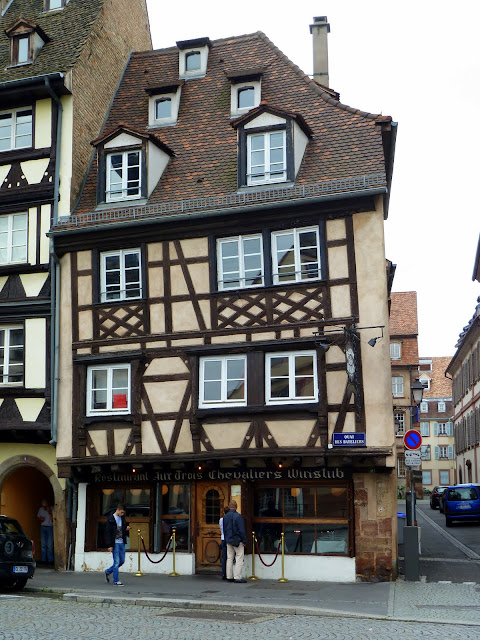 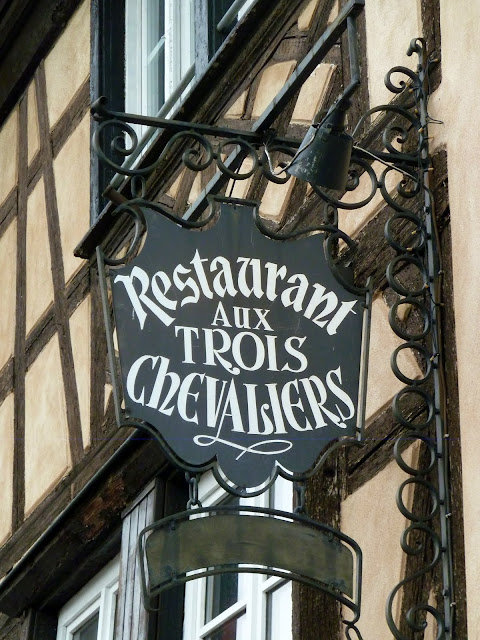 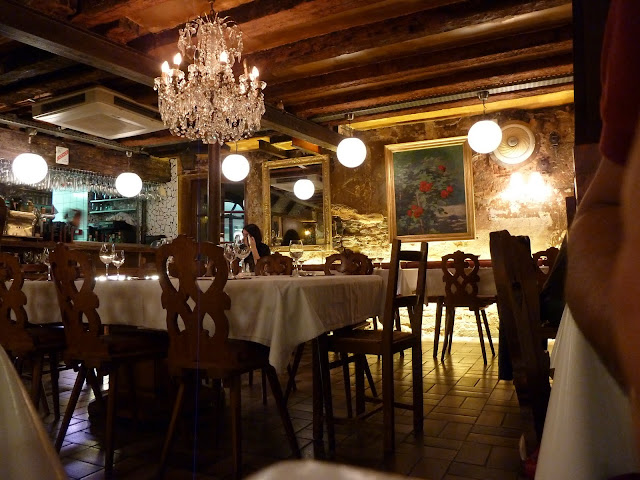 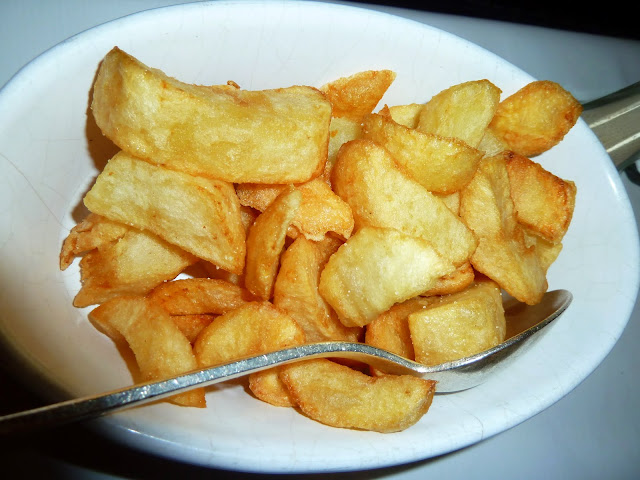 The last night was the best meal of all. The restaurant was called Restaurant Au Pont Corbeau. The restaurant was shut for lunch so getting a reservation proved to be a bit of a challenge. Finally at about 5 pm someone answered the phone. Phew. We were glad to have waited. Great little place probably seating 50. Front of house had just two people, the owner and a paid employee. They did everything, order taking, wine service, starters, main course, dessert, coffee, clearing plates resetting the table, getting the bill and finally the process of paying the bill. They were on the go continuously. Both had little buzzers on their waist, and as soon as food was ready the buzzer vibrated so they knew they had to get food from the kitchen.

To start we shared some delicious Fried Pig Ears with Tartare Sauce and dried Wild Boar. Both were delicious. Then for our mains HRH the Queen ordered an Andouillette Sausage with Mustard Sauce and Chips. An Andouillette Sausage is a coarse sausage made with intestines and various seasoning. It is quite nice, I find the texture  a bit strange but the Queen likes them. I got a roast Pork Knuckle and Sauté Potato. Excellent food. To round of the evening we had a disappointing Plum Tart. 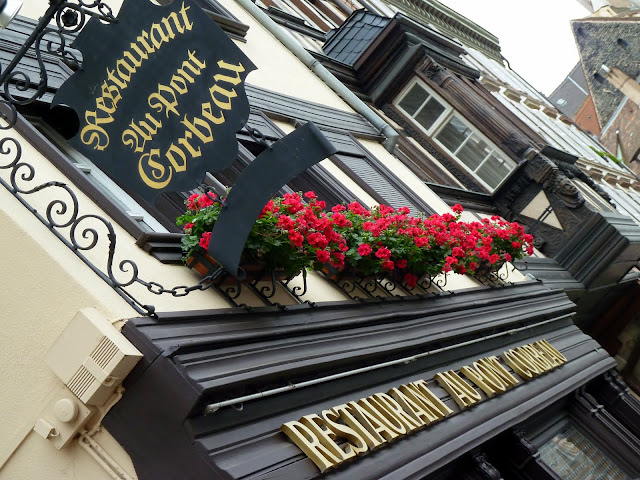 All in all, eating in Strasbourg is very good, you can eat well very well for a reasonably small sum of money. They have a lot of good local food and wine. The place is very pretty too. So why not go there?
Posted by Stonethrowers Rants at 9:36 PM