Lyon - The Bouchons & the food

The most significant contribution Lyon has made to the Western world is food, glorious food. The reasons for this are not hard to see.

Lyon’s location blesses it with some of France’s finest produce. The streams and rivers nearby – in fact two rivers flow through Lyon, the Soane and the Rhone – provide the best Pike, Trout and Crayfish. The areas to the North provide the legendary Bresse Chicken, bearing the colours of the French flag, Red combs, white feathers and incredible blue legs. The wonderful vineyards of Beaujolais and the Rhone Valley adjoin. The Charolis breed of cattle are from here supplying quality beef. With cattle you have dairy and consequently excellent cheeses. And, of course the humble Pig is celebrated here with quality charcuterie products, all manner of sausage, salamis and terrines. Pork is everywhere.

With this depth of food, it was natural for Lyon to produce exceptional chefs. However, at first, it was the “Mothers of Lyon” or “Mere”, simple lady home cooks who were the leaders in this regard. These humble cooks formed the backbone of Lyonnais cuisine. The famous Bouchons of Lyon grew out of this. Even today, the classic Bouchons are family owned and run. Following the Mere’s you had the great Paul Bocuse who came from Lyon. He was hugely influential, and passed away this year [2018]. Daniel Boulud also grew up in Lyon. Frankly, there are several chefs from this region. You can read about our meal at Paul Bocuse Restaurant here.

Some of the classic Lyon dishes are eaten even today around the world, yes, even in our humble Bharat. The Pommes Dauphinois which is simple sliced potato cooked in milk and cream and baked. Gratins are big in Lyon and find themselves on menus in restaurants and homes everywhere. If you go to the Willingdon, Yacht Club or Bombay Gym, often on the menu you will find Potato Lyonnaise which is sauté potato with onion. Almonds coated with pink candied sugar are typical of Lyon.

Bouchons are absolutely typical classic Lyon restaurants. I do not think I could give you an exact example of what a Bouchon could be from a Mumbai context, but, I would imagine, a classic Gomantak restaurant could be a rough equivalent. By Gomantak I mean Saayba at Bandra, or Hotel Sandeep at Dadar or Sindhudurg also at Dadar [not Gajalee]. These serve somewhat local food [I know Gomantak/Malwan is not Mumbai but close] are family owned and serve only Gomantak food by and large. No Chinese and Kebabs.  A Bouchon is normally small, people sit cheek by jowl, often on shared tables, water is shared in as much as a huge jug is placed on the table for the entire table. Most bouchons have checked red and white tablecloths, are reasonably cheap and serve good wholesome non fine dine food. The wines are local and offered by the glass or carafe. The menus are limited and generally standard offering standard hearty Lyon food.

Because of the huge brand value, the word “Bouchon” has, this has resulted in many in-authentic places calling themselves Bouchons and decorating themselves like the authentic. This led to a sort of reform movement in the late 1990’s. L'Association de défense des bouchons lyonnais (The Association for the Preservation of Lyonnais Bouchons) was formed and this Association grants certifications to "authentic" bouchons. These receive the title Les Authentiques Bouchons Lyonnais and are identified with a sign showing the cartoon character Gnafron, a Lyonnais symbol of the pleasures of dining, with a glass of wine in one hand and a napkin bearing the Lyon crest in the other. Needless to say, in-authentic Bouchons often have touts or as the Australians say “Spruikers” outside, menus in hand, imploring you to enter. Stay away. A classic authentic Bouchon, on the contrary, will be impossible to get into without a reservation. They will simply have a sign outside saying “Complet”. 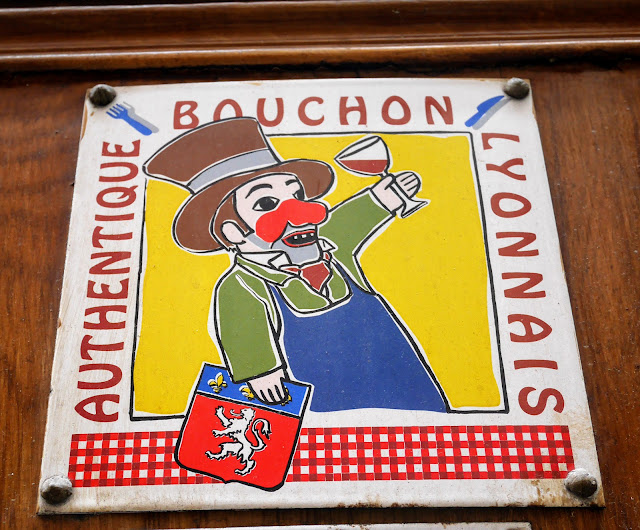 We ate at two Bouchons. The first was Le Meuniere. 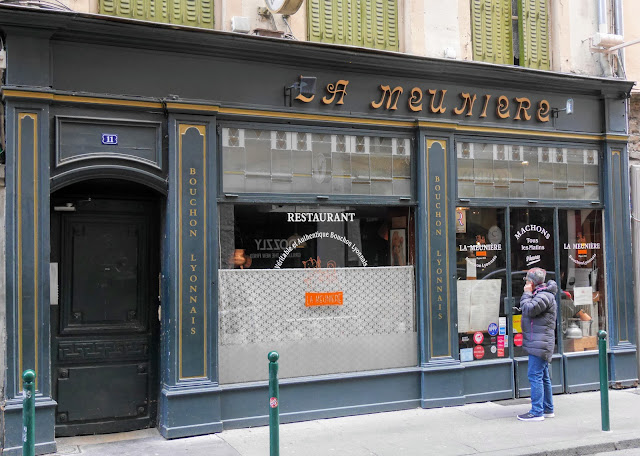 Above: HRH the Queen of Kutch studying the menu at Le Muniere


The walls were decorated with all types of kitchen implements. In the centre of the dining room was a long table laden with salads on top of which was a ceramic Pig. In a Bouchon you have an option of asking for salads. You are presented with the 4 or 5 salads of the day, all of which you can eat as much as you like. The bowls are simply placed on the table.

I of course was delighted with the fact that every table had a basket of deep-fried pork fat or Scratching as it’s called in the UK. This was free for you to nibble on. Much like getting wafers or “chana” at a bar in Mumbai. Lovely. I am not describing every dish. Do have a look at the photos. 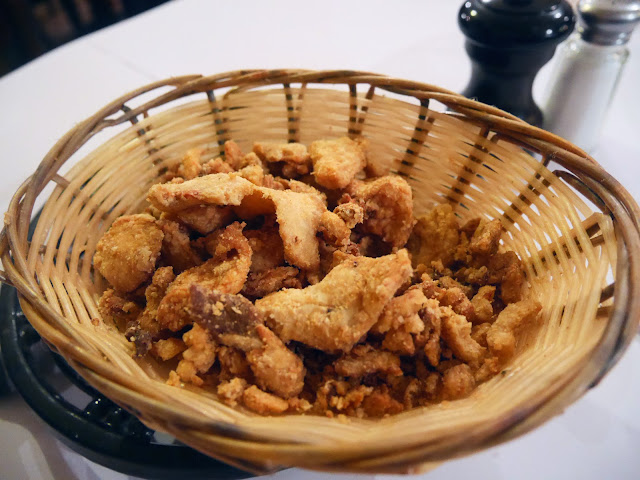 Above: The deep fried pork morsels 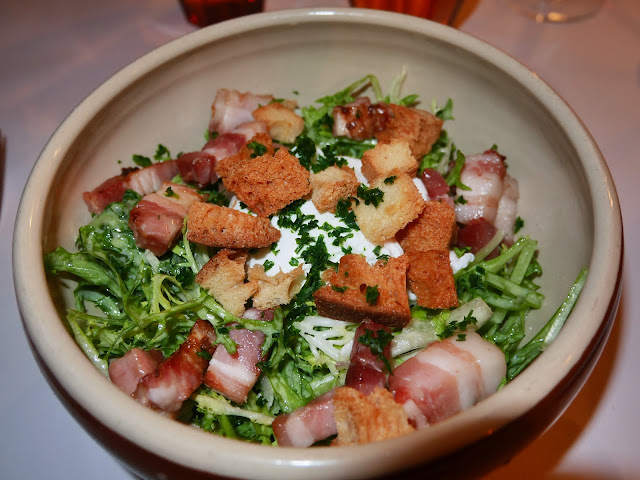 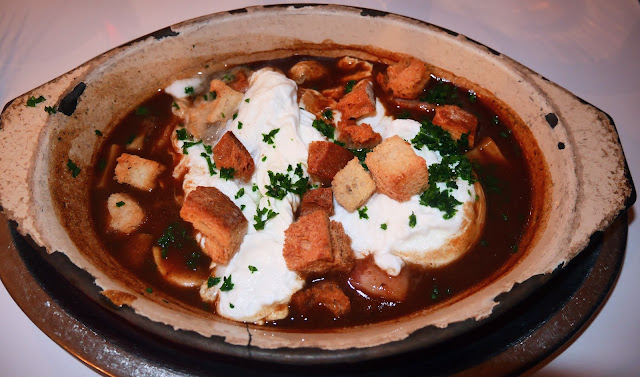 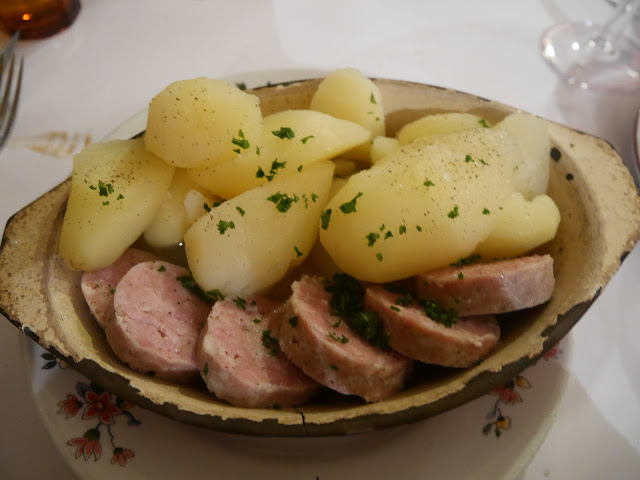 Above: Local Sausage with Buttered Potato 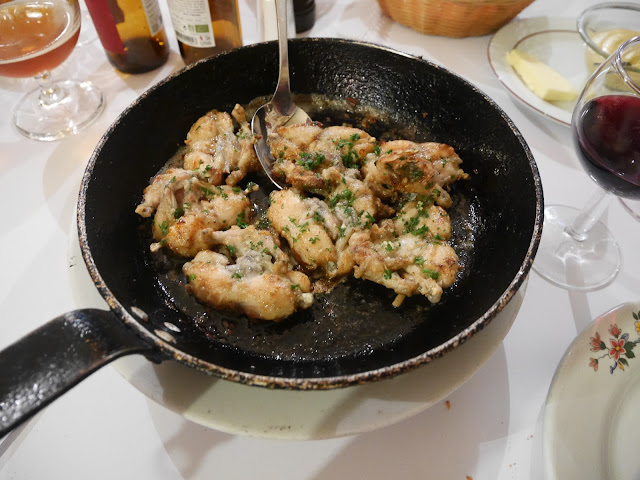 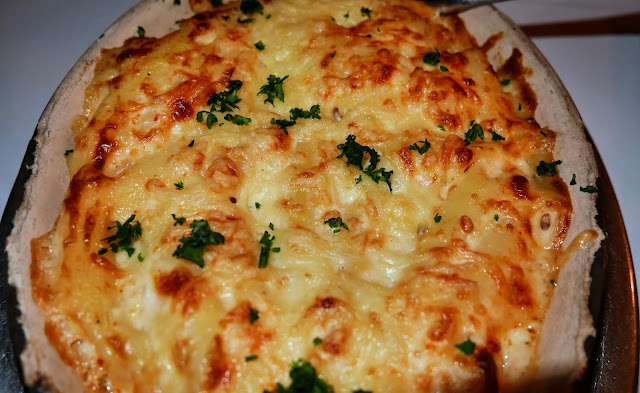 Above: Macaroni & Cheese with the Frogs Legs 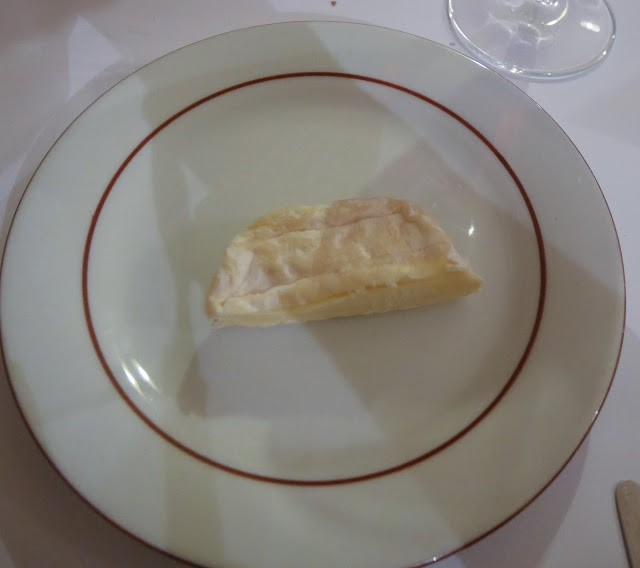 Above: 1/2 Saint Marcellin for dessert

The second meal, was much better. It was at Au Petit Bouchon Chez Georges. We were seated at probably the worst table in as much as it was next to the Kitchen. I did not mind, I got to see the action. Just two chefs in the kitchen so no swearing and violence. We were on a table for 4 occupying 2 seats and the other two were occupied by a French couple, who were tourists in Lyon themselves. Very charming and good food. 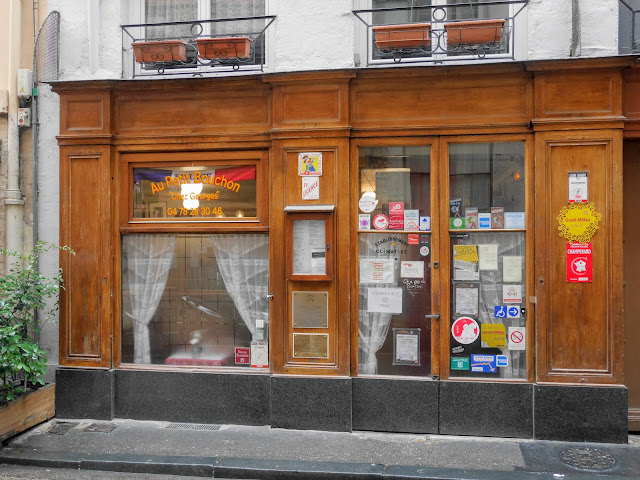 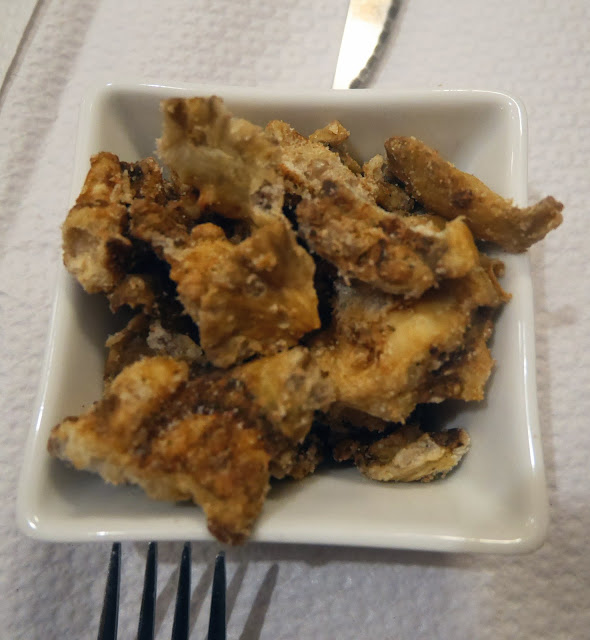 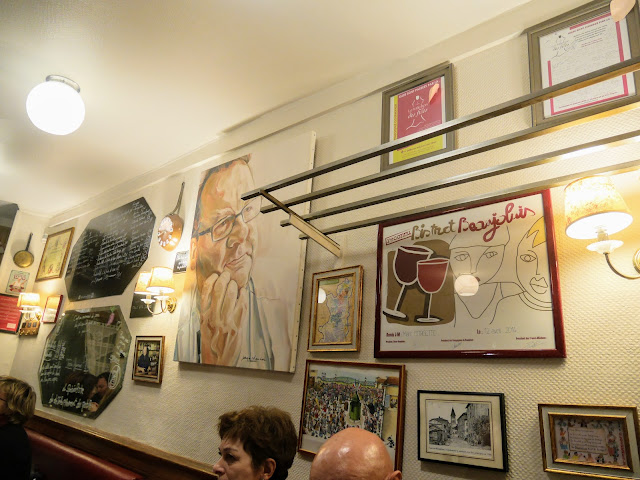 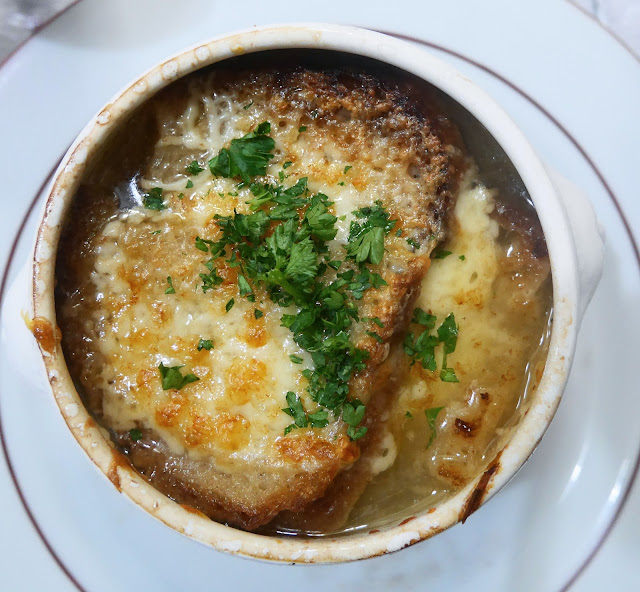 Above: French Onion Soup. My all time favourite 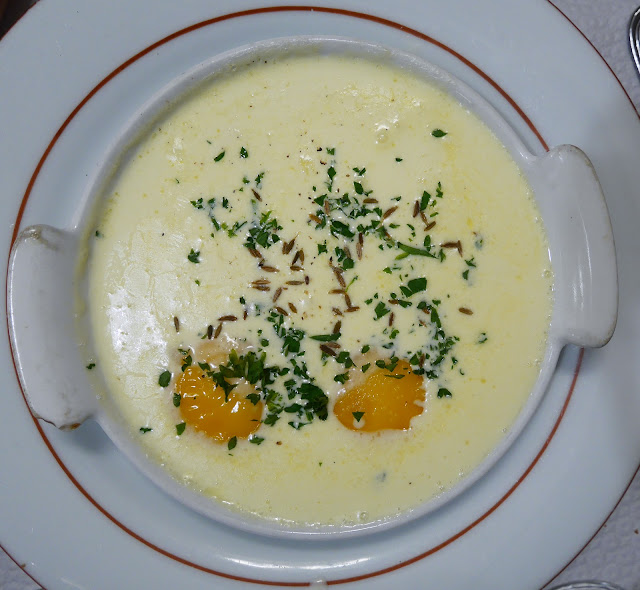 Above: Eggs baked with Saint Marcellin 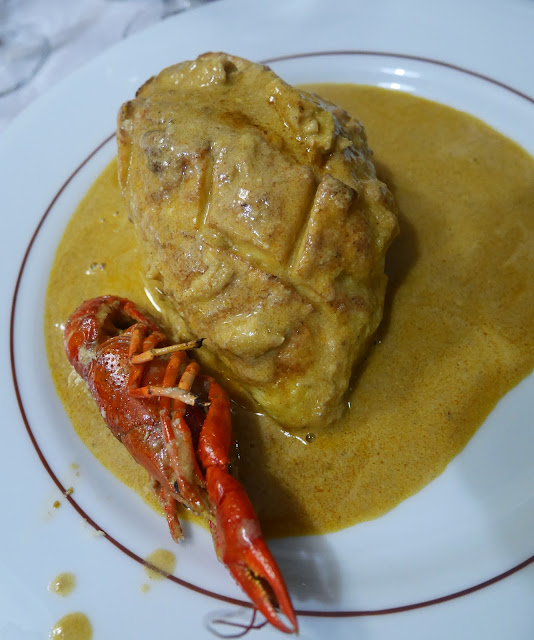 Above: Pike Brochettes with Sauce Nantua 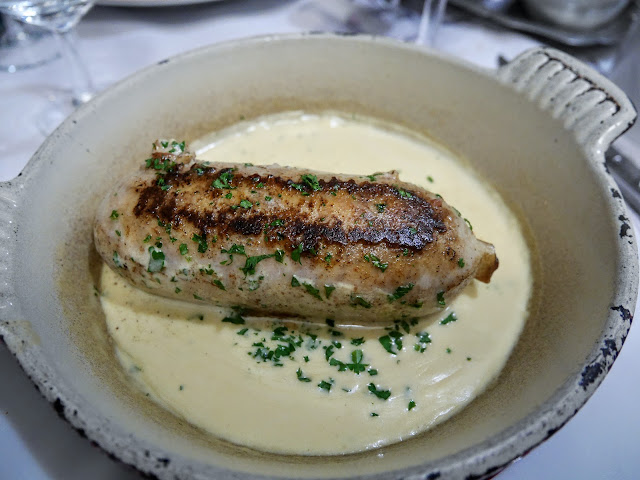 Above: Andouillette Sausage with Mustard Sauce 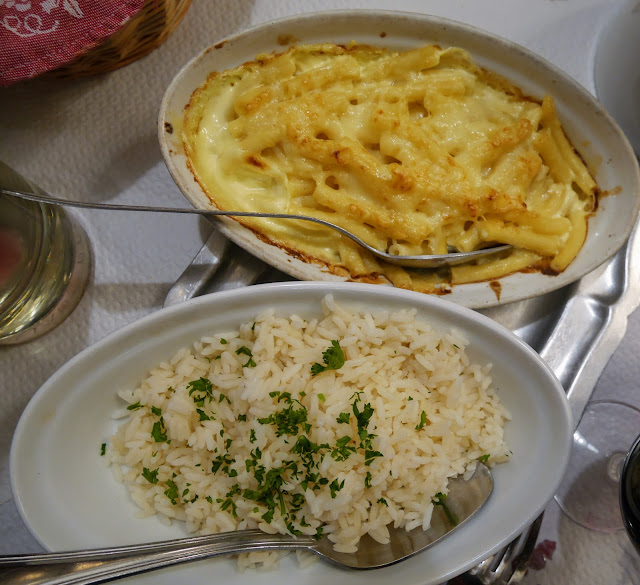 Above: Some Pilaf & Macaroni & Cheese again as accompaniment 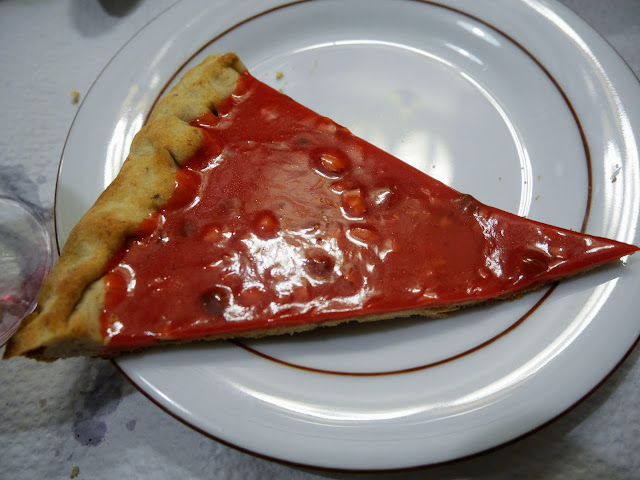 Another meal that we thoroughly enjoyed was lunch at the central market in Lyon. This is called the Les Halles Paul Bocuse after the great man. As you will know, lunch is not something we do, neither do we drink at lunchtime. This afternoon was a departure. We had a glass of white wine each, and, a platter of meat and cheese at an Italian delicatessen in the market. It was beautiful food. I must confess, we were really not happy after that meal. We felt heavy, sluggish and lazy. In balance we are glad we did the lunch. Such fun and just so civilized to be able to have a meal like this in a market. 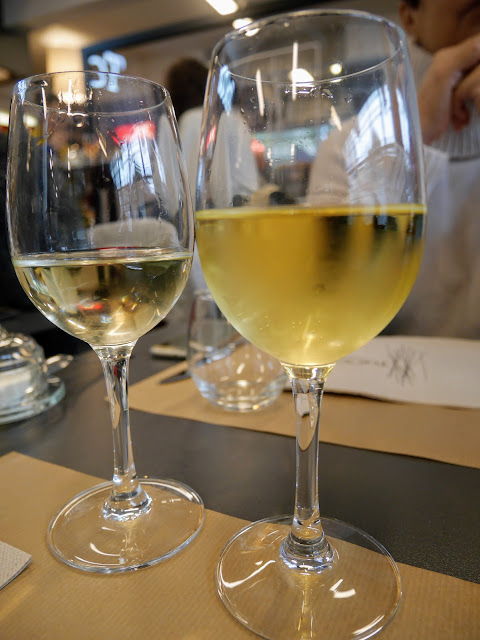 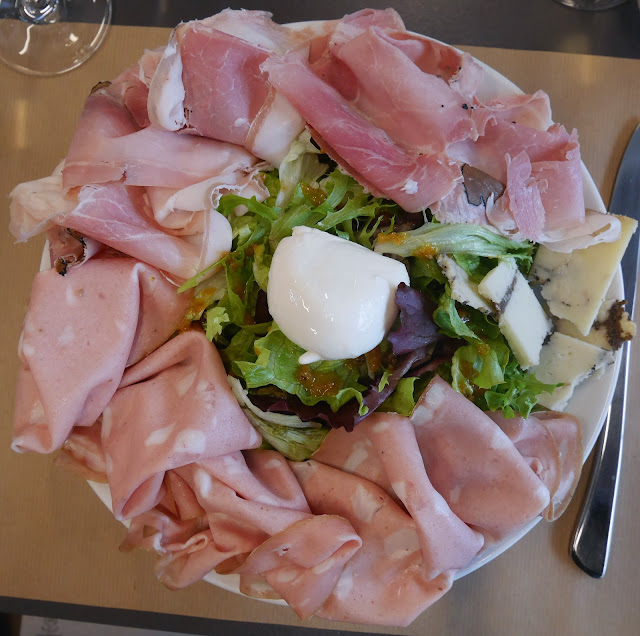 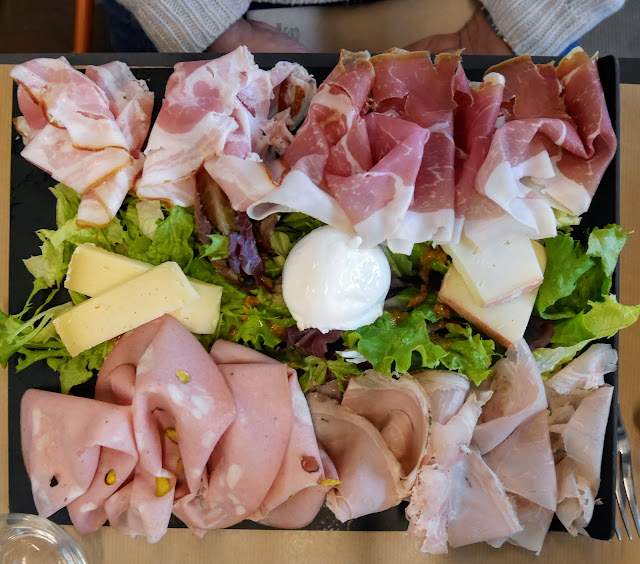 The food in Lyon is exceptional. I would say it’s better, more sophisticated and with a greater depth than at Bologna. Lyon is also a bigger city than Bologna so your options are more. Food is not at all expensive if you eat in a Bistro or Bouchon (which is obviously what you should be doing), a full meal will cost you 40 to 50.

We did like Lyon. As I have written in my previous post, this was our second visit. Thoroughly recommend Lyon and if you like food this is really the place to be.

A few more photos of the great food. 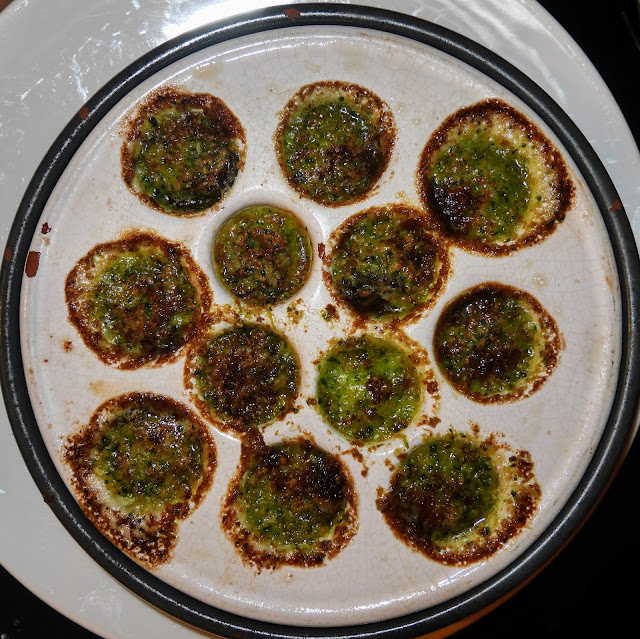 Above: Snails with Parsley & Garlic Butter 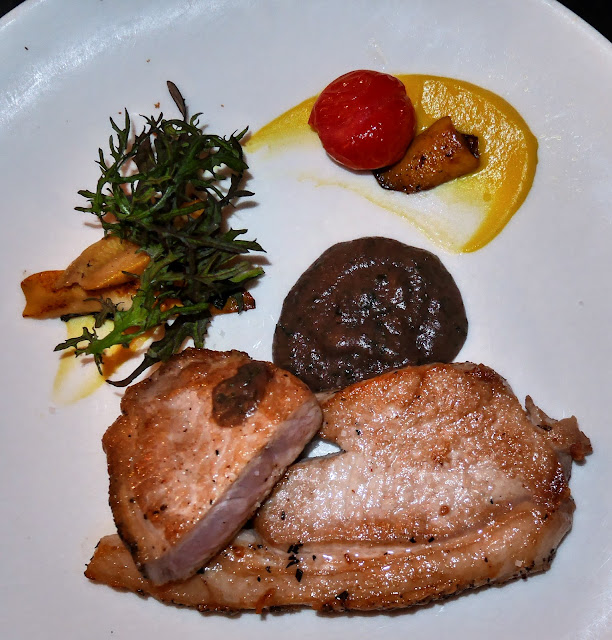 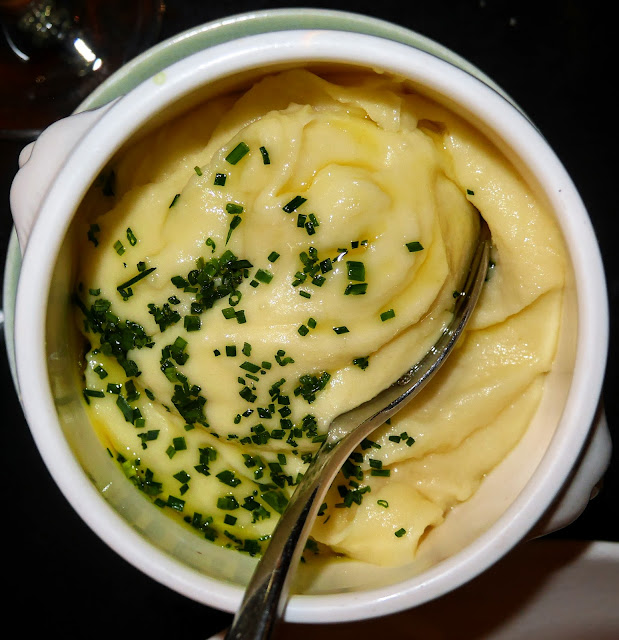 Above: Magical Mashed Potato. Not butter but olive oil 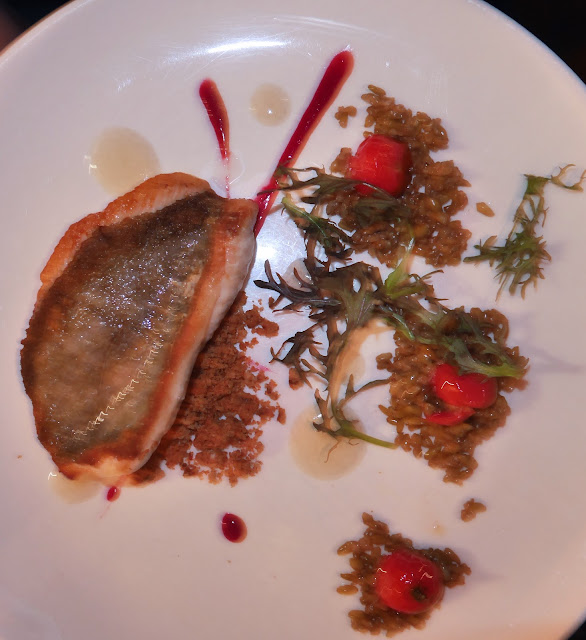 Above: Fish Grilled with a Raspberry Sauce. 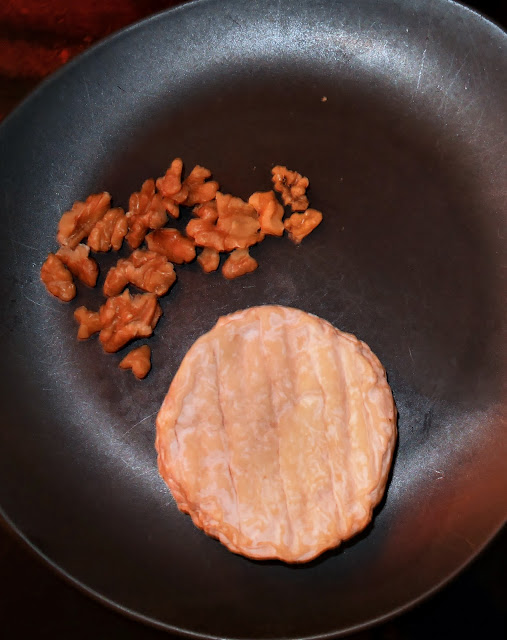 Above: Another St Marcellin cheese 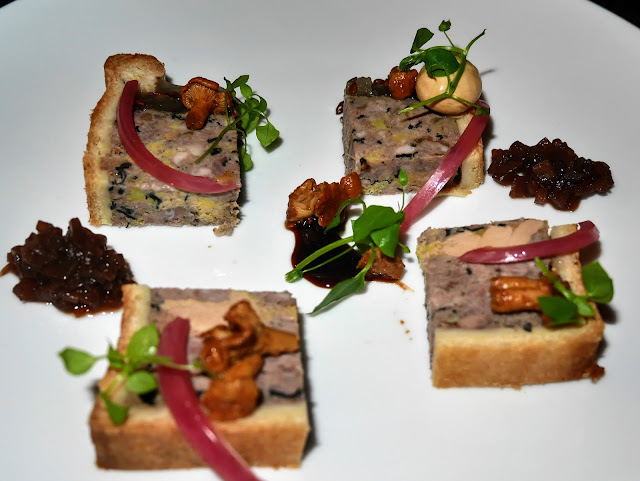 Posted by Stonethrowers Rants at 7:37 PM