Dinner was to be at Brasserie Chavot on Conduit Street. This is a new restaurant, about a year old opened as part of, and, at the same time as not part of the Westbury Hotel. The restaurant is located in a space owned by the Westbury Hotel but for some reason does not show up on the Westbury website as a restaurant. Strange. I am sure there is an explanation.

The man whose name is on the door is Eric Chavot a Frenchman with quite a formidable reputation. He has worked with the best, Pierre Koffman, Marco Pierre White and Raymond Blanc among others. He then joined the Capital Restaurant and promptly earned it 2 Michelin stars. When he left the Capital lost its stars and Chavot did a variety of jobs before returning to start Brasserie Chavot. Within a year he had 1 Michelin star. Depending on how cynical you are, seeing the speed at which Chavot has got this star would indicate that he is an excellent chef with top class food or that his `Mama’ or `Fua’ is a Michelin inspector. I am happy to tell you that the former is the case.

Bookings were made from Bombay, well in advance and on the day we set about walking to the restaurant. It was chilly and breezy, soon, alarmingly, it started to drizzle. Luckily in a few minutes the drizzle stopped and we arrived at the restaurant, damp. Coats were taken and we were sat down.

The restaurant looks absolutely gorgeous. You feel as if you are in a Parisian Brasserie. To my mind every aspect was meticulously reproduced here. High ceilings, dimly lit chandeliers art nouveau-style tiled floor and banquettes, distressed mirrors all lend to the distinctly Parisian feel. Wonderful ambience. To get going I decided to have an Aperitif, a French one called Lillet. A Lillet is a combination of white wine and Citrus and is served cold. I had never had this before. It tasted like a Martini Bianco. Perfectly drinkable. HRH the Queen of Kutch stuck with Italy, she had an Aperol Spritz which she declared was as good as any she had in Italy. With these we got a small bowl of smoked Almonds and Cashew Nuts. Lovely. They must have been made in house, but, I can swear that they tasted exactly like the nuts you got in those Hickory Salt Almonds from Blue Diamond California. Does anyone remember those? 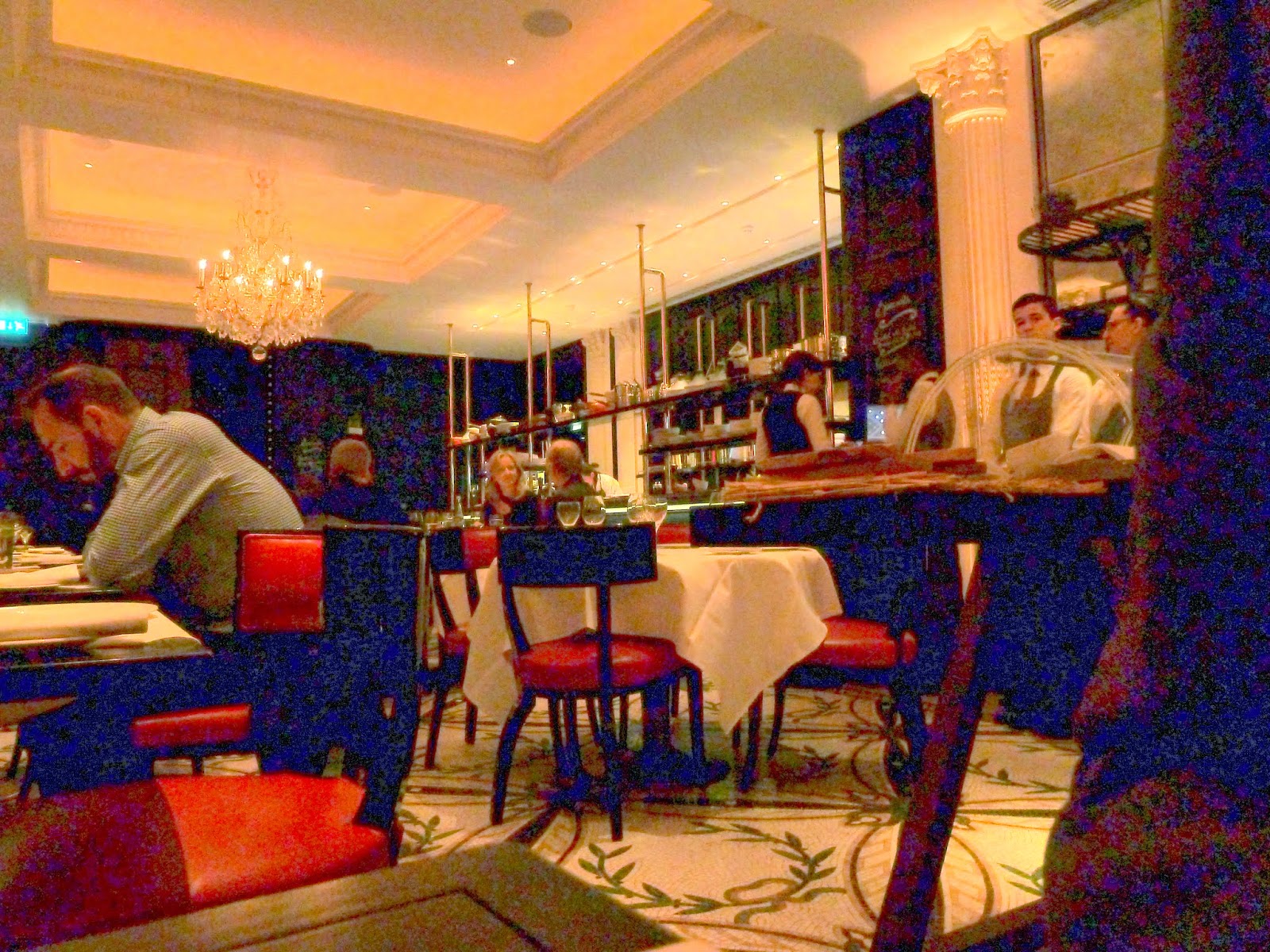 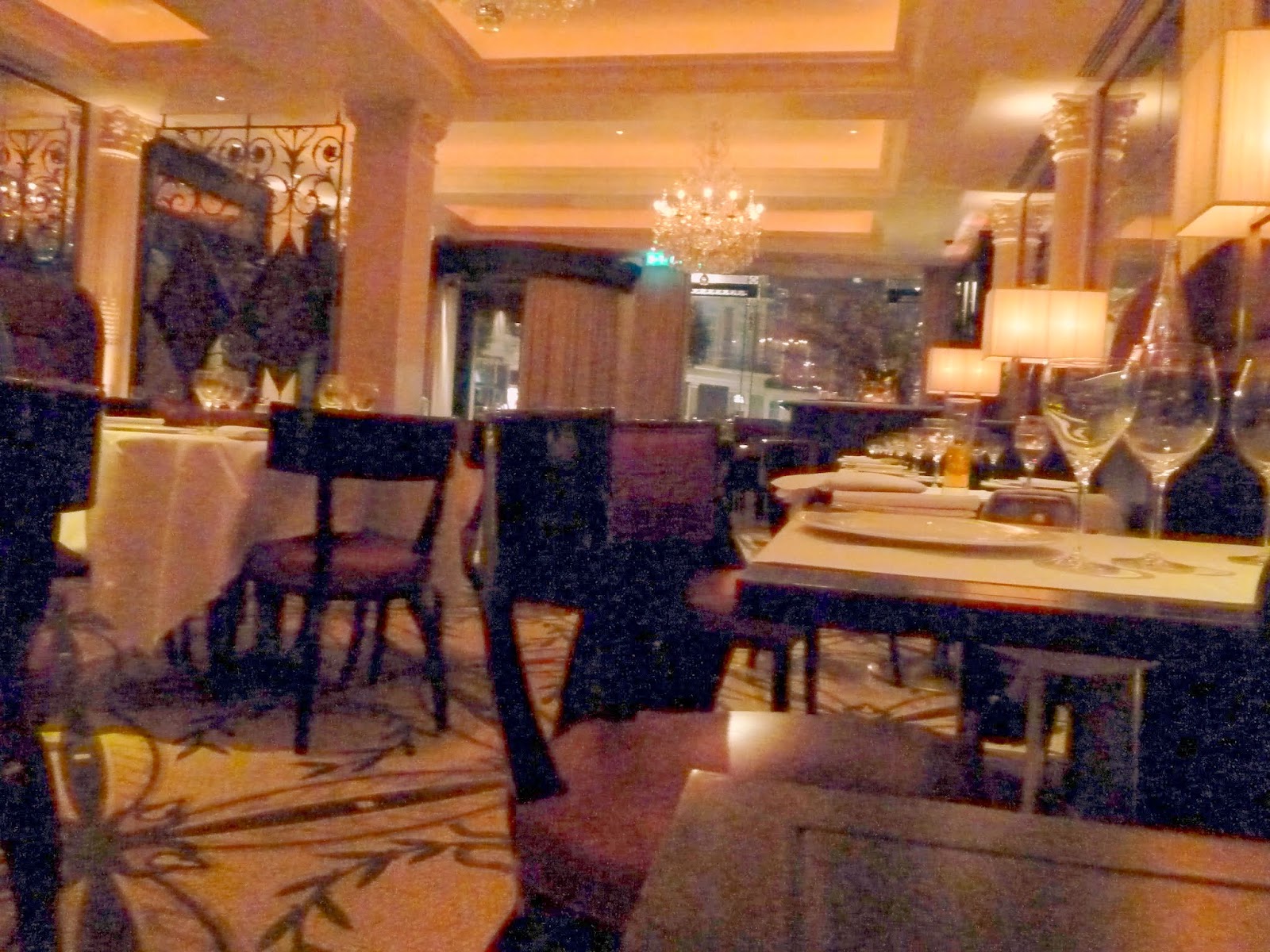 Thankfully just one menu and just a single page. 13 starters and 12 main courses. No `jhanjhat’ no choosing from only one menu, no we can give you one course from the tasting menu and one from the inspirational and other such nonsense. One menu and one wine list. A lot of the 13 and 12 dishes looked like something we should order. We made up our minds, ordered, drank our Aperitifs, snacked on the nuts and waited for the food.

Snails Bourguignon. Meatballs and Potato Espuma was what HRH the Queen of Kutch ordered. This came in a big bowl. The dish was stupendous. It was a delicious reworking of the classic Escargot Bourguignon where the snails are kept in their shells [or re-inserted into `fake’ shells] cooked in butter with parsley and garlic in an oven. Here the snails were out of the shell, sautéed in the butter with garlic and parsley. Small [marble sized] Pork meatballs were added and the snails and meatballs covered with a Potato foam. The dish was so tasty and so comforting. Deep fried Soft Shelled Crab with Saffron Aioli is what I ordered. Deep frying food is something that can lead to exceptional results. You need to have a sufficient quantity of oil [so that it does not cool when the food is added] at a temperature of not less than 180 Centigrade. These two very simple requirements are almost never followed resulting in heavy greasy, oil soaked food.  Brasserie Chavot managed both and the results were stunning. A crunchy, golden greaseless Crab served on a wooden board on a fake Parisian newspaper. The Crab with lashings of Paprika dipped into the Saffrony Garlicy Aioli was a brilliant combination. We were very very happy. The food was top class so far. We told the Waitress that the Snails Bourguignon should be served at breakfast. Boy oh boy it will keep you going and make you smile. Who wants a thakela Masala Dosa or namby pamby Idly for breakfast? This would be a real breakfast for champions. 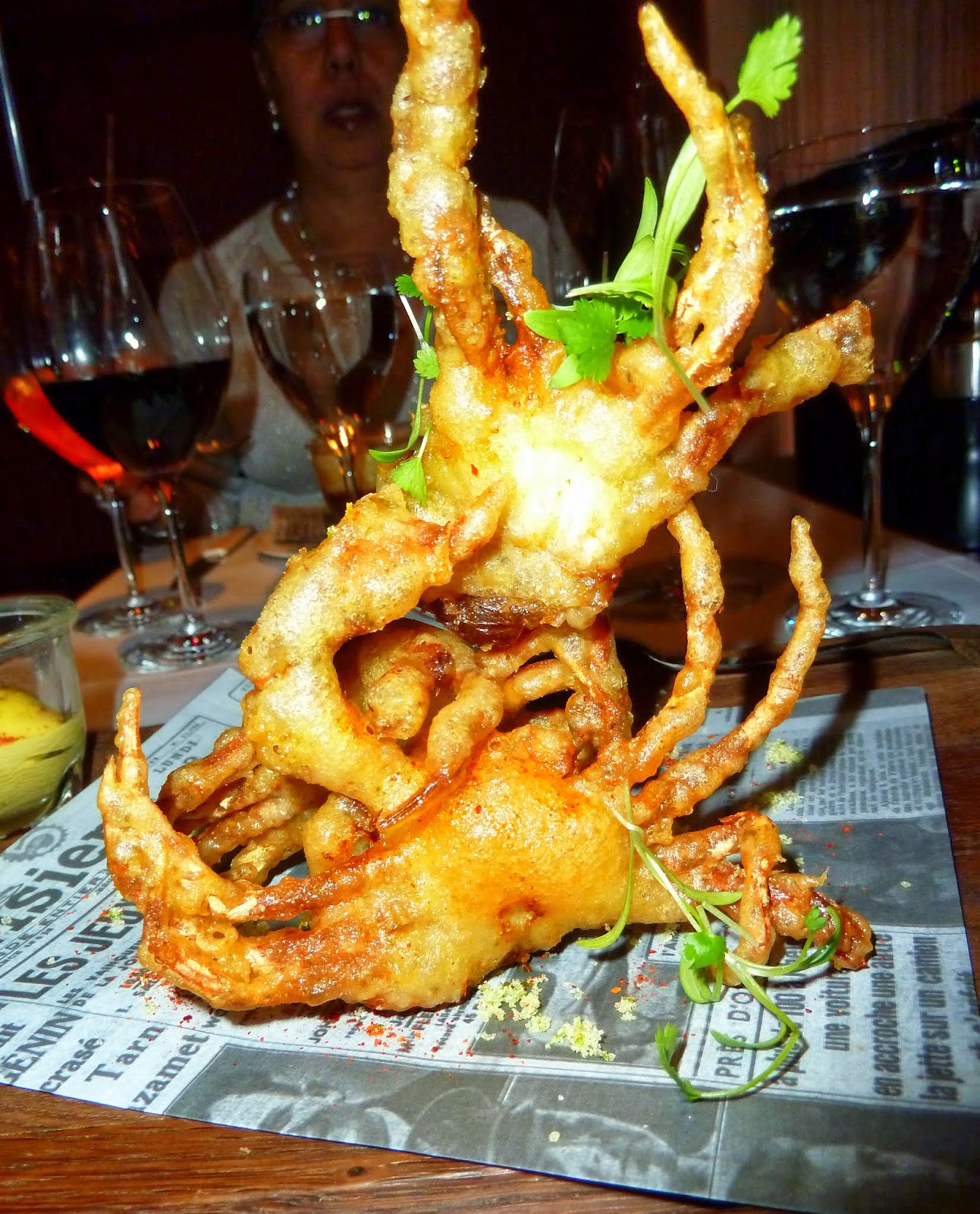 The main courses did not disappoint in the least. HRH the Queen of Kutch decided to order a Pork Chop with Mustard and Honey. Once again the food was brilliantly seasoned and very flavourful. You could taste the grill flavour and the Honey Mustard Sauce was well balanced. The plate also had a Pear which was grilled. With this she got a large portion of Pomme Frites which, once again, were given the proper treatment. Hot oil and a lot of oil. The result was crunchy, golden and greaseless chips. I had my favourite Choucroute Garnie. This is Sauerkraut with five pork products – pork belly, some ham, some knuckle and some exquisite sausage. I have had lots of Choucroute Garnie at many places. This one was different in one significant way. There was a small portion of very well cooked Sauerkraut instead of masses of badly cooked Sauerkraut as is usually the case. This made the dish more balanced and elevated it. I was pleased. 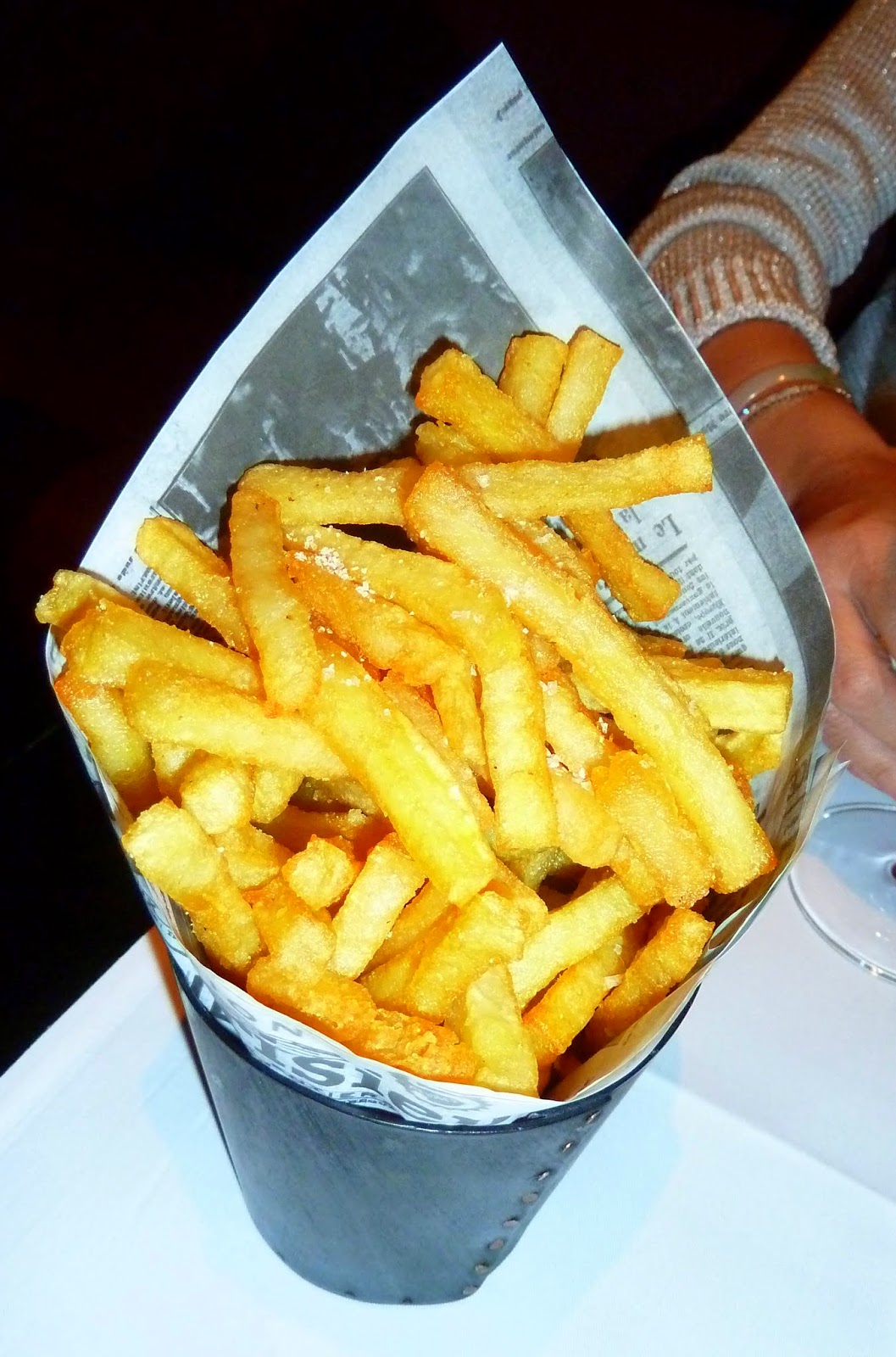 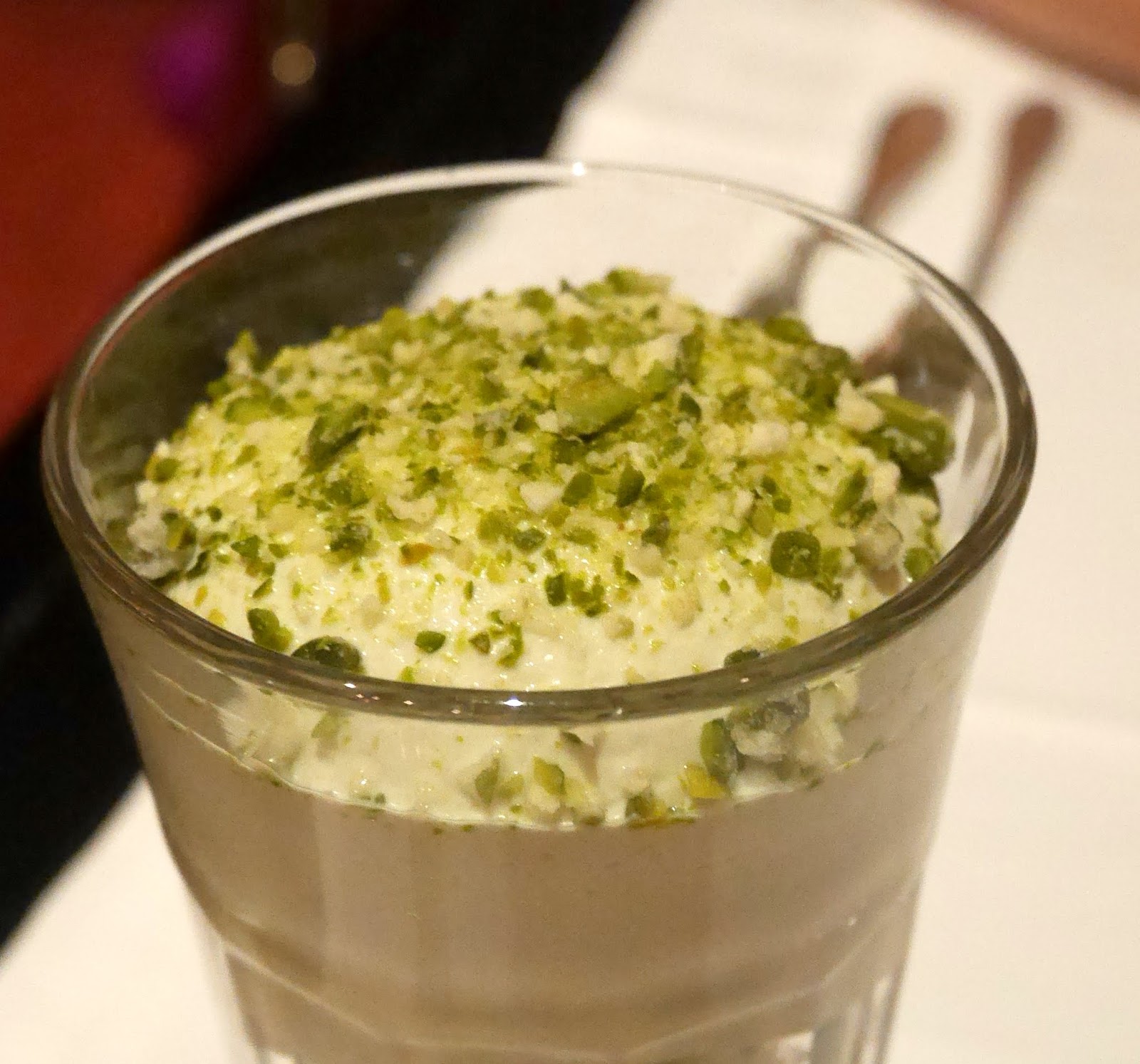 We washed this down with a reasonable bottle of wine GBP 22 that is Rs 2200 or so. No way could you have got this in India. There was one slight irritant. Normally bread is given `free’ with a meal. In Italy, as I had written earlier, there is the irritating Coperto which is a charge for bread. Here at the Brasserie Chavot bread was chargeable. If you ordered it you had to pay for it. This in itself is not a problem as we had spotted this in the menu, but, the staff was instructed to offer it at every opportunity. This was jarring. It was somewhat like touting or hustling. Unnecessary we thought.

It was a beautiful meal. Robust, full flavoured, heavily seasoned food expertly cooked. What more could one want. Eric Chavot is an immensely talented Chef. We would like to have many more meals here in future. There is a lot more to eat.

Posted by Stonethrowers Rants at 10:26 PM