It is often said that Bengali food is the most refined among all Indian cuisines. I tried to research the meaning of the term `refined food’ in the context used. However, my research led nowhere. The only answers were on refined food – as in refined sugar, refined wheat [Maida] and so on.

Anyway, Bengali Hindu food is one of the more sophisticated cuisines in India. Unfortunately finding good Bengali food outside Bengal is difficult, especially in Mumbai. You have the obligatory Oh Calcutta and small number of shacks/garages/holes in the wall in the Bengali diaspora areas – Lokhandwalla and Navi Mumbai – that serve you Bengali food.

Bengali food is quite different. They extensively use pastes – Mustard, Poppy Seed, and Onion – in the food. The spicing is mild and Panch Phoran – a combination of 5 spices, Fenugreek [Methi] Cumin, Fennel, Nigella Seed and Mustard – is quite unique. Fish is eaten universally. Kashundi, a piquant Mustard sauce sometimes boosted with either green chilly or raw mango is a universal accompaniment.

Bengali Muslim food is also a large cuisine, which assumed prominence because of the long standing Muslim Governors in Bengal. Dhaka, now in Bangladesh, was on the trade route leading to a Muslim influence. In later years, Tippu Sultan and Wajid Ali Shah the Nawab of Avadh were exiled to Calcutta. With them there the influence of Muslim food grew. Like Awadhi cuisine, Bengali Muslim food also uses very aromatic ingredients like Kewra and Attar.

Calcutta has also had the benefit of the immigrant Chinese, the Jews and of course the British. The Chinese food of Tangra is well known. A lot of the Chinese from Calcutta set up Chinese restaurants all over India. But then, we get so much Chinese food in Mumbai that Calcutta Chinese held no joy for us.

The British influence has left its mark on the food too. Restaurants like Mocambo and Peter Cat are prime examples serving this Anglo Indian food. However, we were not very enthused eating either Chinese or Anglo Indian. The Anglo Indian food seemed like what we would regard as Club food in Mumbai. Some sort of baked dish - fish, prawns or chicken - coated with a White sauce or Béchamel, Cheese added and the whole thing baked. This is served with boiled peas, carrot, French Beans and possibly Chips or Mashed Potato. Rissoles or cutlets are popular too as are British Raj style Devilled Crab abd Roast Chicken. Not really appealing, at least to us.

So, what we thought is that we would stick to Bengali food, both Hindu and Muslim, during our stay.

Before going further, two points. First, Indian food, as a rule looks horrid in photographs. Looking at a photograph no one in his right mind should eat any Indian food. I know you are not supposed to say this, much less write this, but, Indian food looks like shit. No pun intended. Also, most food looks similar, though can taste very different. Second, do not be alarmed by the oil you see. I simply let the dish sit for a minute and then simply pour out the oil into a separate bowl.

The first night we were assured by the Hotel that though they do not have a speciality Bengali restaurant, they do serve very good Bengali food in the Coffee Shop. So that was it for dinner. The staff recommended the Fish Paturi which is a fillet of fish, seasoned with Mustard Paste, wrapped in a Banana Leaf and steamed. This was quite nice. With this was recommended the famous Hilsa, fried. A Hilsa is something any Bengali goes dewy eyed and orgasmic about. We got two slices of terribly overcooked, dry bony fish. Rubbish. Waste of money. Indians cannot cook fish with any degree of subtlety. Last up was what we were looking forward to – Kosha Mangsho. This is a dish we love, this is a dish which Ruby Banerjee gave us a fantastic recipe, this is a dish even if I say so myself, HRH the Queen loves making and makes very well. Kosha Mangsho is a thick mutton curry with deeply caramelised onion being the base. The Kosha Mangsho served was very good. It had the same consistency and texture of the one we make; however, the difference was in the spicing. Here the predominant spice was Cumin or Jeera. Ruby Banerjee’s recipe uses powdered Cardamom, Clove and Cinnamon. This was good stuff. However, taken as a whole, the meal was sub-par. And, certainly not worth the money.

We had to have the world famous Kathi Rolls from Calcutta. Nizams in the New Market area was the `invertor’ of these Kathi Rolls. A Kathi Roll comprises of a Paratha that is shallow fried on a Tava or griddle. A beaten egg or two is added such that the egg coats one side of the Paratha. Marinated meat – chicken or mutton – is separately grilled on charcoal, removed from the skewer and stir fried on the Tava or griddle with sliced onion, chilli and `secret’ sauces. Lime or vinegar is added along with some Chaat Masala. This is then placed on the Paratha and the Paratha rolled resulting in a delicious hot portable roll. The word `Kathi’ comes from the fact that originally the meat was threaded onto metal skewers but with passage of time the metal skewers were replaced with wooden ones. Hence the word Kathi. From the several options we ordered a Single Egg Double Mutton. The Rolls were delicious. I could have easily had two, but I restrained myself. Flaky Paratha, juicy spicy tangy mutton inside intensely flavoured. Wonderful stuff. Fully recommended. 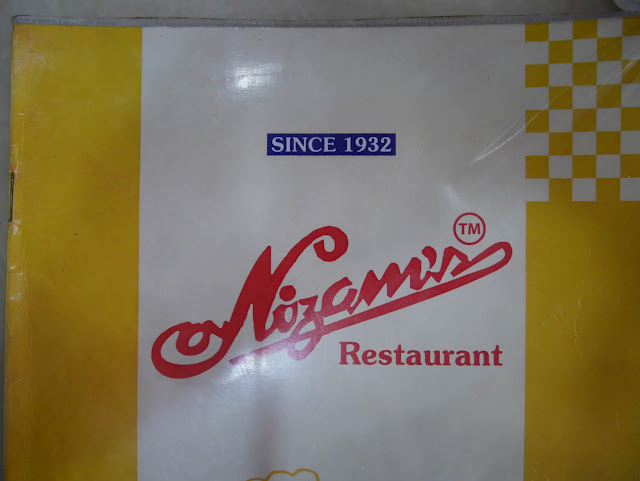 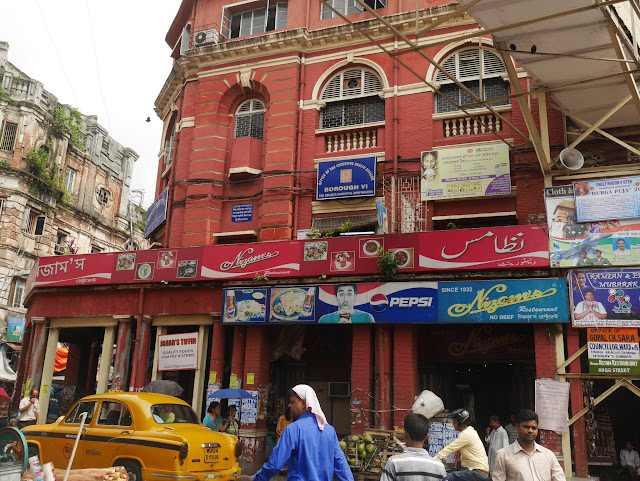 We had made reservations at Oh Calcutta. This is widely regarded as being one of the top two or three Bengali restaurants in Calcutta. It was a dry day, hence after wetting our whistles in our hotel room with store bought alcohol, we set out on a very convenient Uber. The restaurant is in a Mall, and like other Oh Calcutta’s done in white walls, wood furniture and sepia photographs.

To start we had Fish Paturi again. This was better than we got at the Hotel on the first day. HRH The Queen likes the Daab Chingri which is prawns cooked in a light Coconut gravy and, served in a Coconut shell. This was disappointing, and bland. Please, before you intervene, bland is not the opposite of not spicy! This was bland. I know Daab Chingri is non-spicy. Sad. The last dish was the excellent Kancha Lanka Kosha. This was thick mutton curry flavoured with Coriander and Green Chilly. This was good. In balance a good meal. 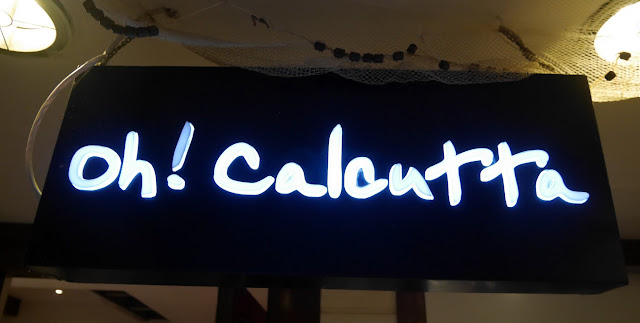 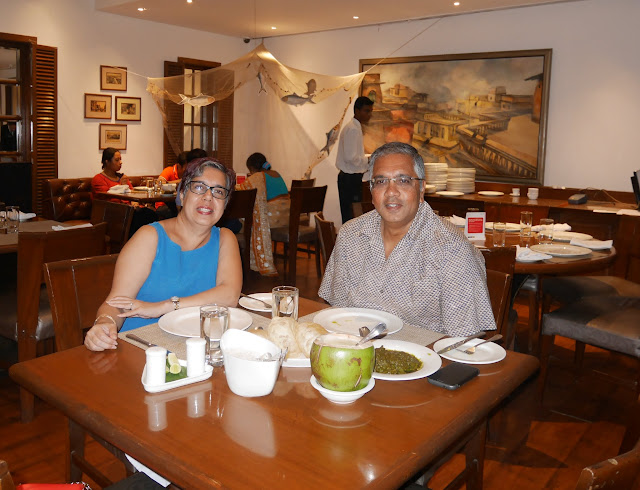 By far the best food we had in Calcutta was at the Muslim Bengali place Arsalan at Park Circus. As far as comparable restaurants go, this would be very similar to Delhi Durbar in Mumbai. The downstairs in non-air-conditioned while the upstairs is air conditioned. The food was really really good. If you have ever eaten at Karims in Old Delhi, then this is what Arsalan food tastes like. I have no regrets or hesitation is telling you that this is a place you must visit when in Calcutta. The Biryani we had was unlike anything we have ever had. Hot, separate grains of rice, moist without being oily, great potato, excellent meat and full of flavour. The predominant flavour is Kewra and Attar. I really like this flavour, some find it too artificial, but I like this. The 3 mutton dishes we ordered – Kasha, Ishtew and Champ were sublime. Please have a look at the difference in Champ from Amritsar and here. I remember which the Champ is, however, I cannot tell the difference looking at the photos from the Kasha and Ishtew, sorry, though, when reviewing this post HRH The Queen of Kutch declared that the first was Kasha and the second was Ishtew. So the photographs have been appropriately captioned. 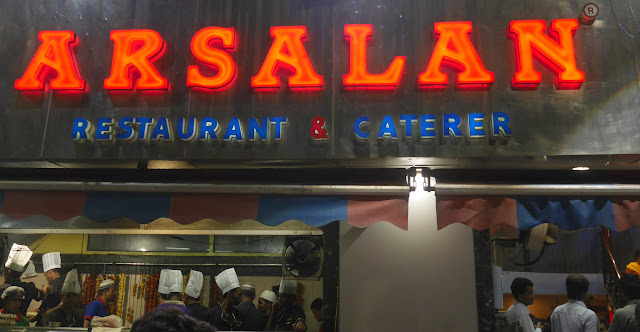 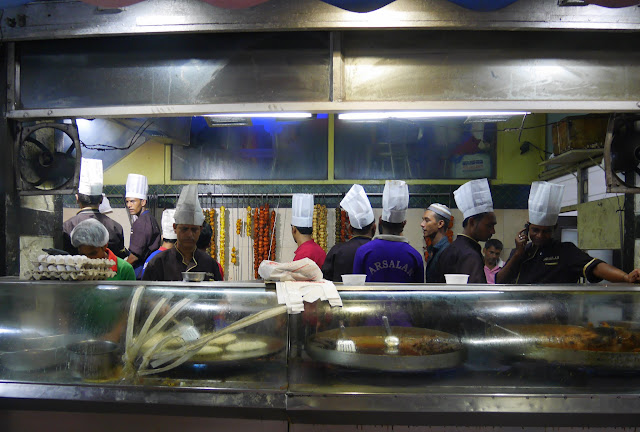 The food in Calcutta is good, in fact quite good. It is a pity that we could not eat more meals there.

Posted by Stonethrowers Rants at 2:55 PM