Helene Darozze at the Connaught

It was a short walk to the restaurant and on being seated we were greeted and handed menus by a young man who, it turned out, lived at Andheri, studied first at Rizvi College Bandra and then the Hammersmith Hotel Management School before joining Helene Darroze as a commis at the very at the very bottom of the ladder. In the last 5 years, he proudly said, he has risen to the position he now held. It was indeed a proud moment for a Desi to be a captain in a 2 Star French restaurant in very proper Mayfair. We told him so. He beamed and swelled with pride, and why not.

Now a word about the service and ambience. The room was large, carpeted and wood panelled giving it a nice gentlemen’s club feel but with definite feminine touches. A modern chandelier dominated the centre. One section of the room was sort of cordoned off by a set of work tables from where butter, cheese and bread were dispensed and the Champagne trolley and Petit Fours trolley were parked. Water glasses were Baccarat and wine glasses Reidel. Custom made crockery for each dish and Sterling Silver cutlery set the tone. 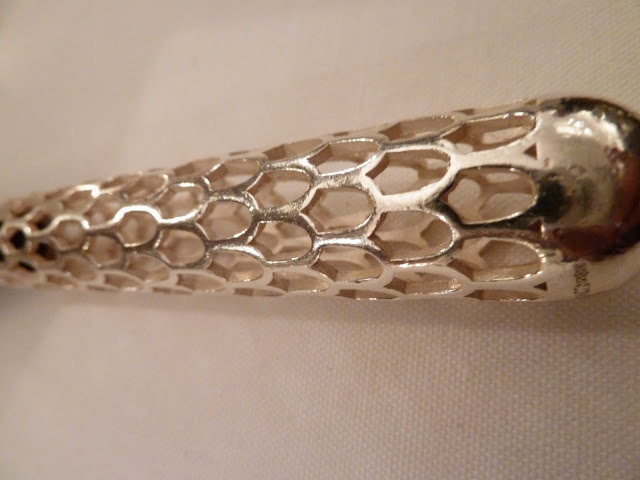 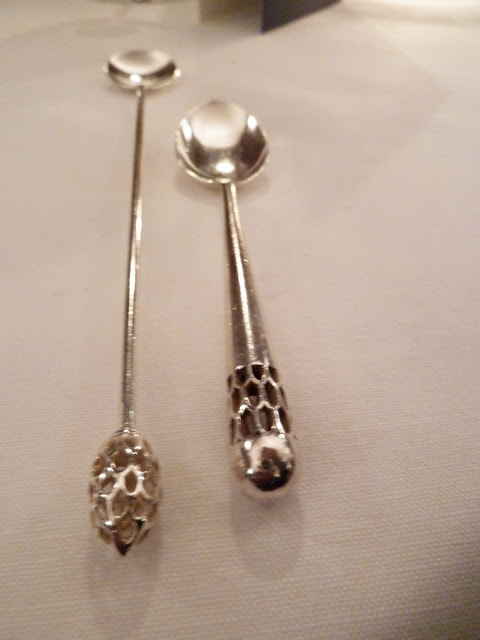 At both Restaurant Gordon Ramsay and Helene Darroze we noticed slate being used as crockery and, in both, gold leaf was used to garnish luxury ingredients like caviar. The ambience at Helene Darroze was much better than Restaurant Gordon Ramsay. The staff were better proportioned [I mean number wise] and things looked promising, in fact quite promising. Being in Mayfair, the restaurant attracted a much older set of diners as well as a fair number of what seemed to be, senior corporate honchos dining. Everybody was in a suit.

No tomfoolery of menu with prices and menus without prices. Everybody got menus with prices. Permit me to go into a bit more detail here on this menu issue. Restaurants deal with menus differently. For example, at Le Gavaroche, the person in whose name the booking stands is regarded as the host and automatically gets the menu with prices. How they determine who is the booker remains a mystery for us but we are certain they always have it spot on. At Restaurant Gordon Ramsay the captain asked, rather brusquely, `who is the host’? On being told that it was me, I got the menu with prices. This was repeated with other customers as well and often caused confusion for the people at the table. Imagine doing this at a kitty party or at a table of Khandelwal’s where everybody will point to the next person!! At Restaurant Paul Bocuse, I, presumably being the man, was assumed to be the host and got the prices.

Unlike at Restaurant Gordon Ramsay, we could not order different menus at the table. The whole table had to select the same menu. You could, if you liked, change a couple of items in the Inspirational menu. One table said they did not want Oyster so that was changed. A nice touch was that after you chose your menu, you got a small print of your menu which was placed on the table so you could refer to it. Obviously if you had a couple of things changed, the change was reflected on the table top menu.

I am not going to give you a detailed description of what we got. Have a look at the photographs and comments.

When we arrived, the restaurant was operating at 15% capacity. Slowly it started to fill up. Alarmingly, service started to get ragged, long uncomfortable pauses between courses became the norm. The speed with which waiters dashed about increased and the seemingly imperious senior managers were soon pacing the room carrying food. It seemed that the kitchen could just not keep up. While we were almost rushed through the first few courses, the time it took to clear our plates and set up for the next course became awkwardly long. Have a look at the photo of the Grouse. The menus said it was served with grilled Foie Gras. No Foie Gras on the plate. The Grouse dish was a disaster, and I told the waiter so. Tables all around us were also abandoning the dish. It was simply awful. Unseasoned, un sauced and with the crucial Foie Gras missing there was just no unctuousness. We did not realise at the time that the Foie Gras was missing and figured this only when we looked at the menu back at our apartment.

Now, have a look at the two photographs of the Manjari Chocolate desert. Notice the difference in the two photos. In one dish the presentation has come apart and the desert has collapsed. Should this happen in a 2 star restaurant which the Michelin Guide describes as `excellent cooking and worth a detour, first class cuisine of its type’. No not to my mind. It should have immediately been whisked away, re-plated and re-served.

The cheese course was not much fun. They had only 3 cheese. A Goats milk, a hard cheese and a Ewes Milk Blue [I cannot stand chese made of milk from Ewes, Sheep or Goat. I find the barnyard flavour extremely unpleasant]. For a restaurant of this class, the punter should have been given a choice, not have had cheese thrust on him.

Ultimately the meal was much like how the Indian Cricket team performs. The same clichés could be applied here. The restaurant snatched defeat from the jaws of victory. It was inconsistent, performance fell away, fantastic on paper but poor on delivery crumble under pressure and so on and so forth.

Pity, a sad end to a very good start. The kitchen collapsed and by the end the service collapsed. What a shame. Don’t waste your money going here.

Posted by Stonethrowers Rants at 7:04 PM