Following the Singapore Airlines flight we landed in Singapore late. The storm I had written about, coupled with the baggage delays, and the slow moving traffic affected by the rains and the Christmas traffic meant we reached out hotel at about 6 pm. We had made a reservation for dinner at the Chinese Restaurant Jiang Nan Chung in our Hotel, the Four Seasons. On checking in to our room HRH the Queen of Kutch made a call from the room to the restaurant. On answering the phone the receptionist said “Good evening Mrs Stonethrower, yes we have your reservation for 8 pm.” Yes I know that hotel phone software flashes your name on the receiver’s handset – much like caller ID. But to put that name to the name in the reservation book in an instant without prompting was something extraordinary. We were suitably impressed.

Before dinner we wet our whistles at the Hotel Bar. Mind you eating and drinking in a 5 star hotel is not normally our modus operandi. However, we had a long flight in, it was late and with Senior Mrs Stonethrower in tow it was not fair to start traipsing around town to drink and eat. Also, we had been told by people in the know that the Jiang Nan Chung had been recently renovated and the food was good.

We were welcomed into the restaurant and given a large circular table brightly lit. Great for photos I thought. As we sat HRH the Queen of Kutch looked to place her cavernous hand bag on the floor. In an instant a waitress brought along a stool and placed it next to HRH the Queen of Kutch. A place to keep the purse. How very Three Star in Michelin I thought. This was getting better. 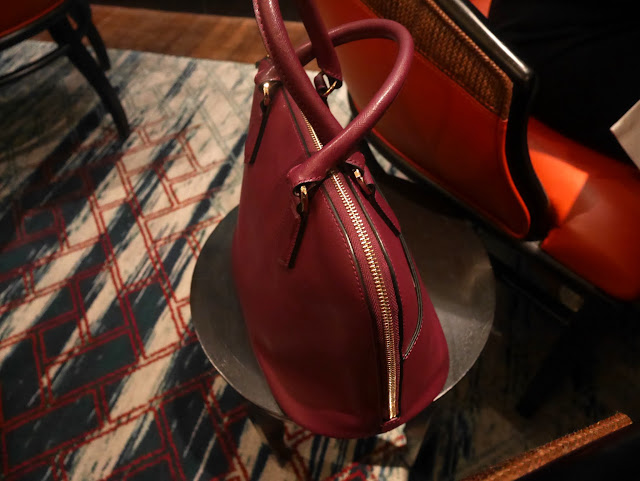 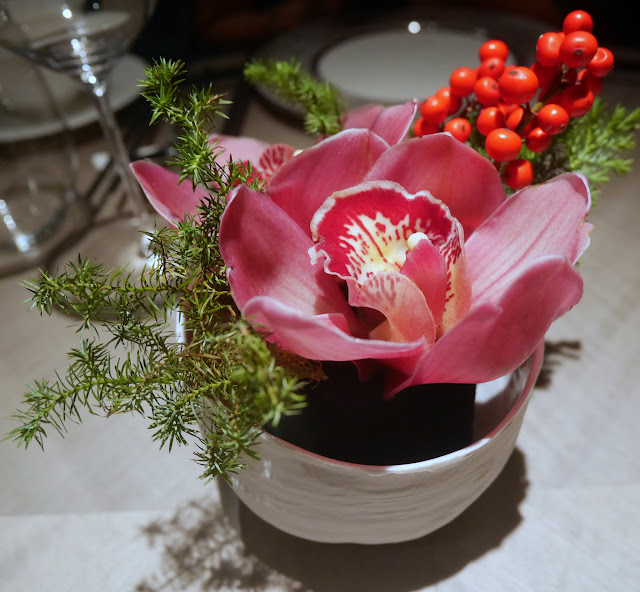 This was Christmas Eve. Soon after we were seated, a few children, part of some local choir came and sang Christmas Carols at the entrance to the restaurant. Indeed it was a season to merry and jolly. All this added to the atmosphere and good cheer. 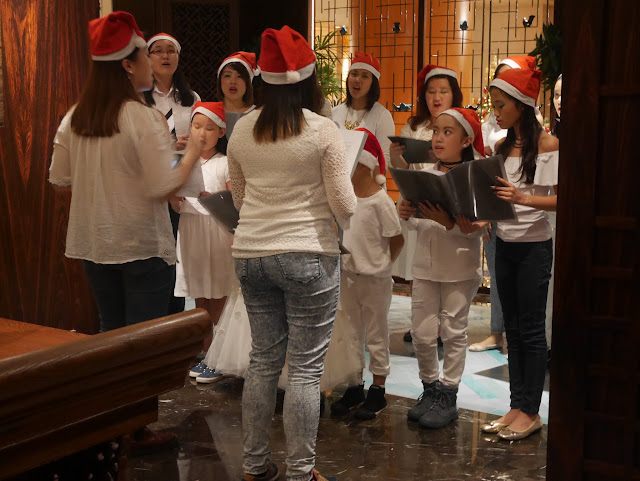 An amuse bouche was placed before us. Pickled Yam and Plum. This was cold and refreshing, the sweetness tasting typically Oriental, with what I think are almost saccharine like bitter undertones. 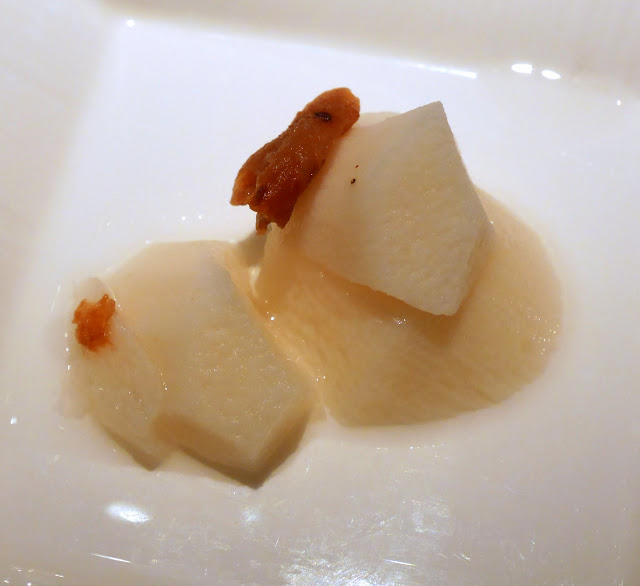 Drinks ordered, it was time for the food.

All of us like Soft Shelled Crab. This is an interesting protein to eat. Soft-shell crab is a culinary term for crabs which have recently moulted their old exoskeleton and are still soft. The crabs are removed from the water as soon as they molt to prevent any hardening of their shell. This means that almost the entire crab can be eaten, rather than having to shell the crab to reach the meat. Of course the mouthparts, the gills and the abdomen, like in all other crabs are discarded. The remaining, edible part of the crab is typically deep fried or sautéed. We have eaten several renditions – at David Thompson’s Nahm in Bangkok and the now shuttered Brassiere Chavot – which remain etched in memory. This one was excellent too. The Soft Shelled Crab was deep fried, Wasabi Mayonnaise added along with Roe. A beautiful start. 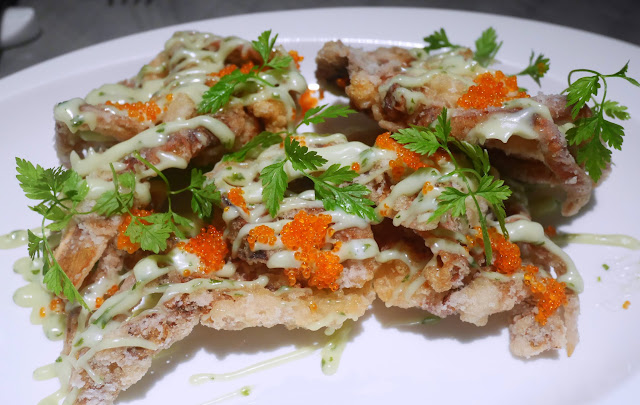 We also ordered a plate of mixed starters. Marinated Jelly Fish and Drunken Chicken which were cold and Barbequed Char Sui Style Iberico Pork which was warm. All were very good. 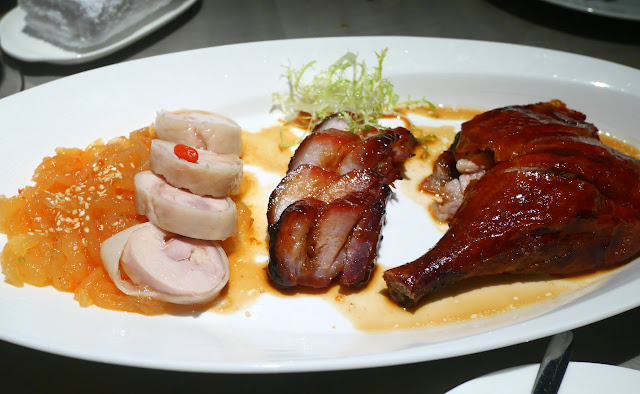 Then it was time for our main courses. The Claypot with Chinese Sausage, Aubergine and Minced Pork looked very enticing. We do like Claypots, the food is served hot and the combinations seemed very unusual. 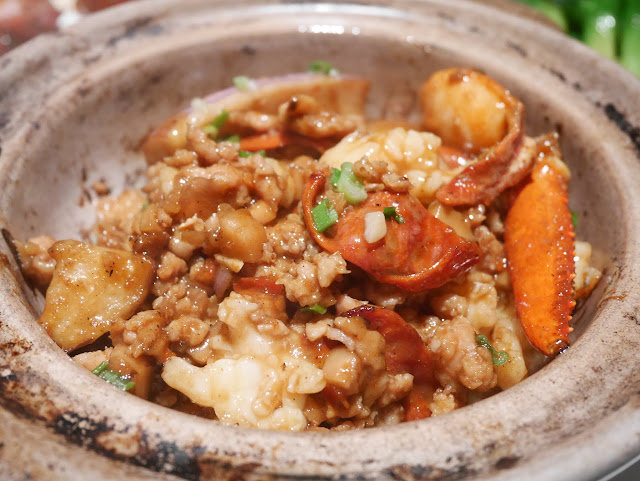 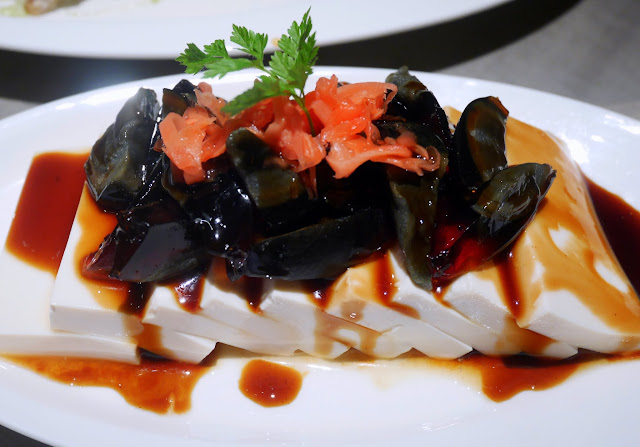 We had to have our green vegetables – so Kailan with Garlic was ordered along with two small bowls of plain steamed rice. It is difficult to get Kailan in Mumbai, sometimes Lalu Brothers at Pali Market has it in stock. This is very similar to the British Purple Sprouting Broccoli. Eat a few stalks and you feel really healthy. 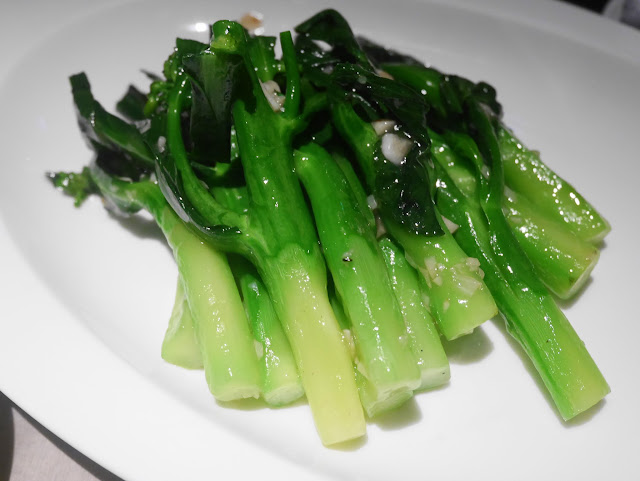 In my mind I was comparing the food we got to what we eat when in London. This was a shade better. I must say that the Chinese food in London comes quite close to this. I did find that thankfully, unlike in India, there is very little “sauce” or “gravy” in the dishes. The quantity of sauce is much like in French food, just to moisten the food and round off the dish. It is not like `daal’ to put onto the rice. Have a look at the photos and you will see what I mean. The photo of the Kailan has no "daal".

This was a good start to what did unfold to a wonderful gastronomic adventure as you shall read in subsequent posts.

We all had a very restful night’s sleep after that meal.

Posted by Stonethrowers Rants at 8:42 PM