When wandering thru the Takashimaya Shopping Centre looking to find Kinokuniya, which I have written about in a previous post, HRH the Queen of Kutch spotted with her little eye -Imperial Treasures Shanghai Cuisine - a swish restaurant on the top floor of the Ngee Ann Building. We walked up and had a look at the menu. Boy oh boy, this was something else. We made a reservation for the night and continued our merry way. 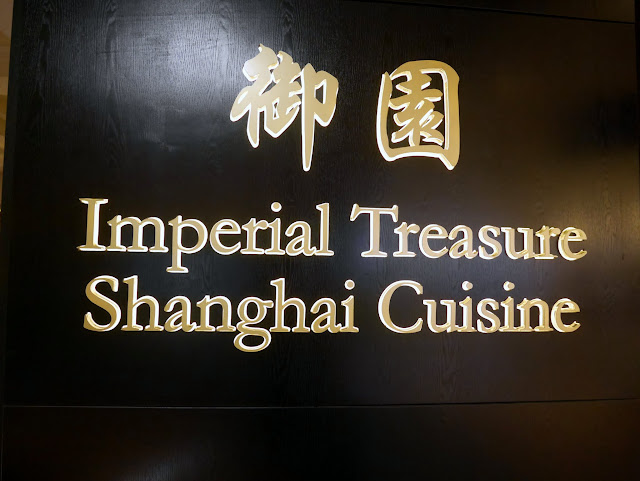 The table was for 8.30. It was booked for a later time to allow HRH the Queen of Kutch and myself to have a drink at Clarke Quay and make our way back to the restaurant. 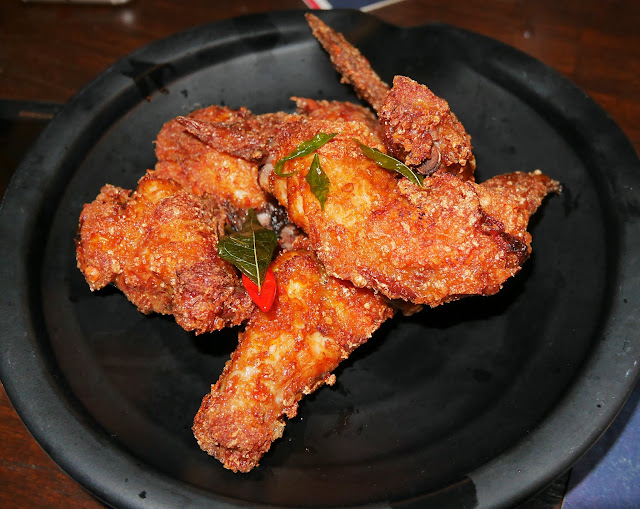 A plate of Chicken Wings at Harry's at Clarke Quay

This is a handsome restaurant, large and upscale. Lots of rooms for private dining which Asians just love. Once again we were seated at a large well lit table. The tables were placed far apart from each other giving you a sense of space. The staff was charming and smiling. We were all relaxed and drinks were promptly ordered. I have been drinking Asahi Beer here. I find that Tiger, Tsing Tao and Carlsberg are just too sweet. Asahi tastes like Kingfisher Ultra. I am not a snob. I can’t be bothered with the fancy Corona with the damn Lime in the neck and all the malarkey that goes with a slice of Orange in a Hoegaarden. Just give me a simple bog standard bottled beer – cold.

The consensus was to order three starters. Let me tell you that each and every one of them was a knockout. All three were cold. The 1000 Layer Pig Ear was delicious. Pigs Ear had been cooked and pressed together. Then the compressed Ears were sliced on the other axis. To understand what I mean, think of a Bebinca except instead of having Bebinca sliced in inch wide slices, to slice the Bebinca in ¼ centimetre wide slices. This is exactly what the 1000 Layer Pigs Year was. This came dressed with Chilli Oil Sesame Oil and a dash of Chinkiang Vinegar which is Chinese Black Vinegar. Superb dish. 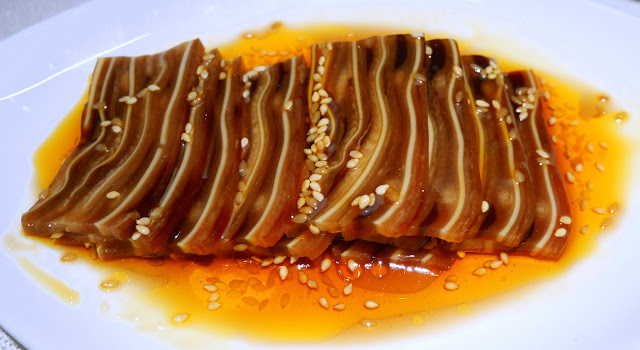 Not to be outdone, the next starter was a study in contrasts. It was Cucumber Skin, pickled,  served cold. This was dressed with a pickling liquid of Sugar and white Vinegar. The Cucumber was crisp and refreshing. It was also wholly vegetarian. Unfortunately the photograph is a bit blurred. 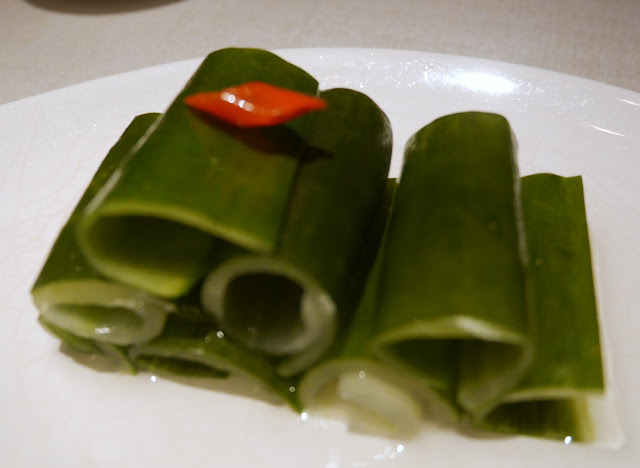 The more intelligent among you must realise that both these starters were simply free money for the restaurant. Why? Because they were made with waste. Pigs Ear and Cucumber Skin!! I mean come on. See how clever the Chinese are. It is said of the Chinese [more accurately the Cantoneese] that they eat everything with legs and wings, except tables, chairs and aeroplanes.

The last starter was Black Fungus simply marinated. The marinade was a combination of Sesame Oil and Vinegar and some toasted Sesame was sprinkled on top. This was very good too. All three starters, as I have said, were winners. Unusually, all were cold, and we did not miss something hot. 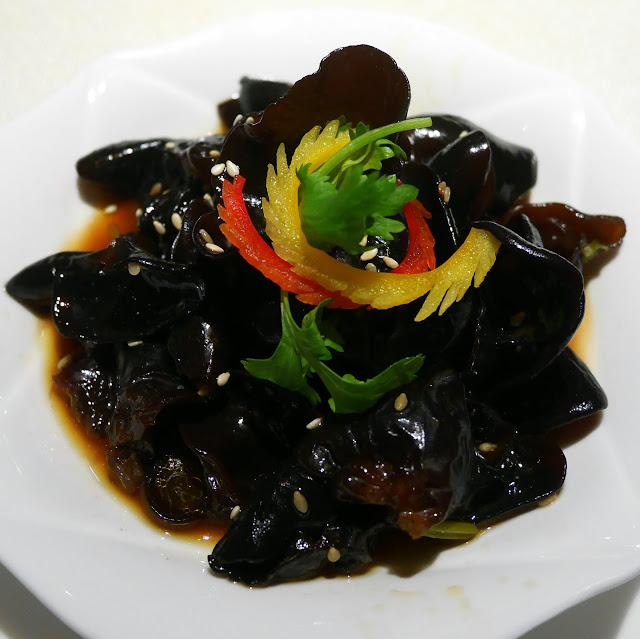 This was good food. We were sure that the hot kitchen would perform as well. We were not wrong.

One more superlative dish was ordered. Shrimps, Honey Peas [basically baby Green Peas] and Truffle – yes the Black Truffle from Europe [Tuber Melanosporum] and not Chocolate. Was this dish Chinese or was this dish French? I do not know, but this was probably the best dish I have eaten in a Chinese restaurant ever. The aroma from the Truffle was superb. 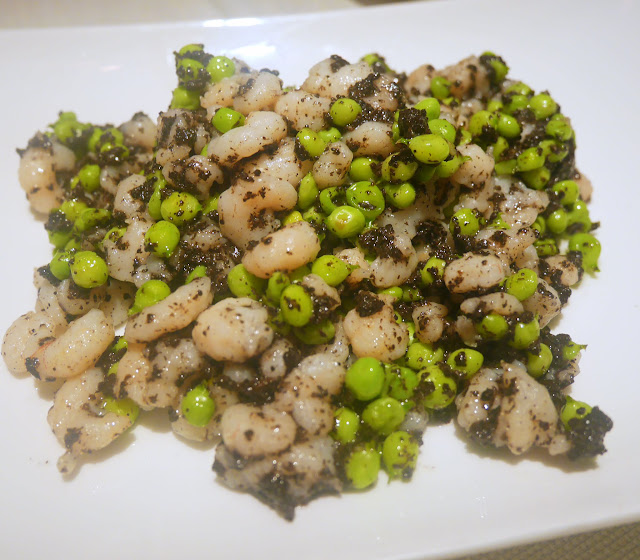 Yet another luxury ingredient was ordered, thankfully in a single serving. Thankfully because, if it was ordered for three we would have had no money left for our subsequent meals. This was a slice of Abalone with a mushroom sauce. The dish was brought out under a Cloche and when the Cloche was lifted the smells were heavenly. I carefully portioned the Abalone and we had this with Chinese Bao. Stunning. The sauce was as rich and as deep tasting as any French sauce made with reduced Veal Stock. Abalone is a marine snail that grows in Australia. The Asians go mad for it. You could say it is their equivalent of a Truffle. 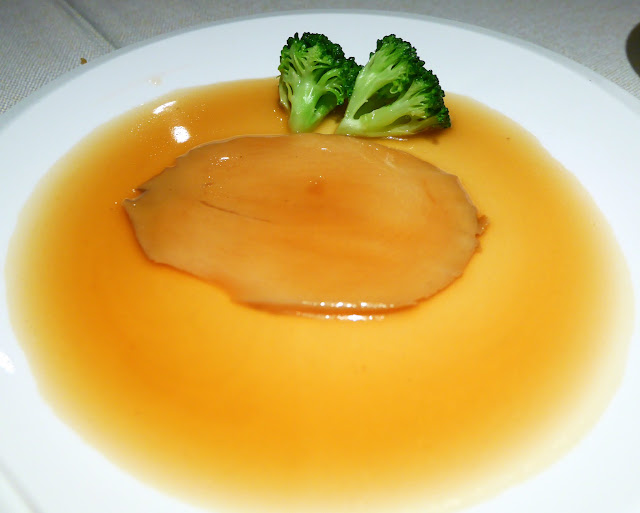 The waitress had recommended the Stewed Pork with Brown Sauce which was served with steamed Chinese Bao. When the dish was brought out it was displayed. There was a square of Pork Belly bound with string. The waitress took it away and carefully cut the strings and removed them. What was served was 4 even squares of the most tender and melting Pork Belly I have eaten in a long time. This was cooked really well. A long slow braise with plenty of skimming of the fats and residue. This dish was the clichéd “melt in the mouth”. The Steamed Bao was great to sop up the sauce. 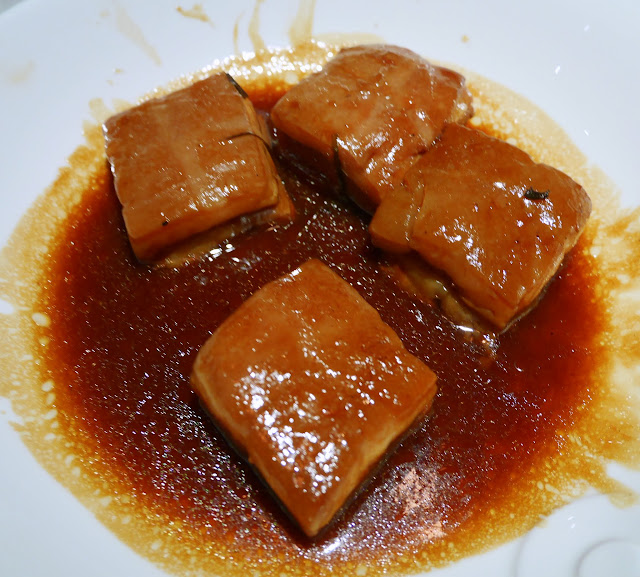 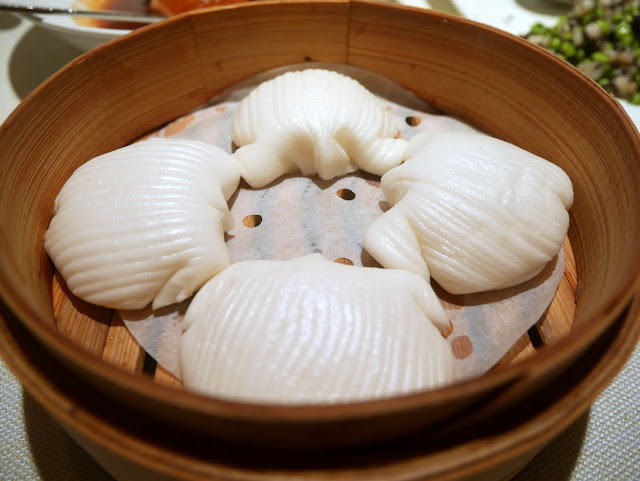 We had two final dishes coming. A simple Fried Rice and Claypot Braised Bean curd & Mushrooms in Oyster Sauce. As you know we like Claypots. This was a simple tasty dish with silken Tofu. You simply do not get this quality of Tofu in Mumbai. This was a treat. Please look at the photo – there is very little sauce, no “daal”. 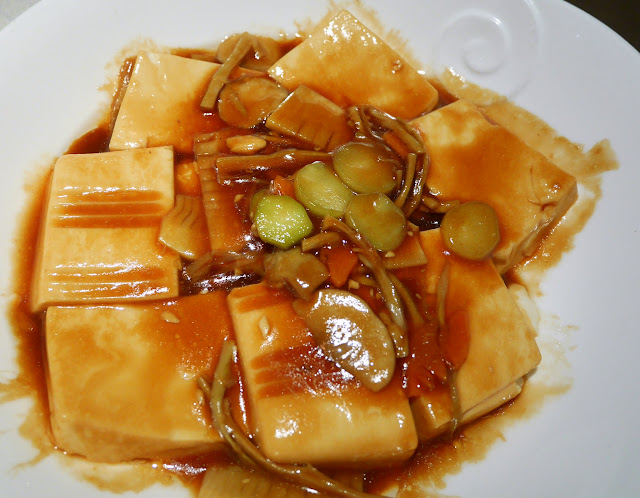 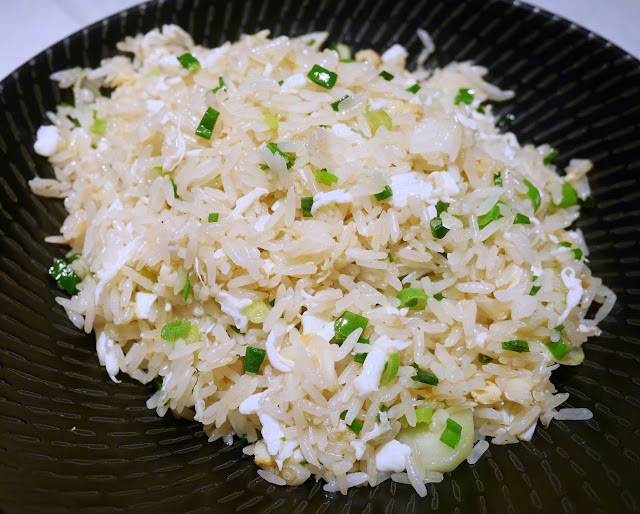 This was an exceptional meal - memorable. The service was good and smiling, the food superlative the ambience great. Not one thing to complain or moan about. It will be one of life’s mysteries to me as to why this restaurant does not have 1 star in Michelin while several others do.

If you are in Singapore be sure to eat here. This was fabulous.

Posted by Stonethrowers Rants at 5:33 PM