Out for a duck

Till not so long ago, Duck was a meat I had to travel out of the country to enjoy or I had to be ready to shell out large amounts of money at one of the 5 Star French restaurants in India. The 5 stars were the only places that had duck on their menu. Then, a few years ago, slowly but surely, duck started creeping into Chinese menus in the metros and once Royal China opened in Mumbai with its signature Crispy Aromatic Duck, it seemed like there was no stopping the Duck invasion. Soon, the wonderful China House at The Grand Hyatt in both Mumbai and Delhi began to serve the most authentic Peking Duck and My Humble House at Delhi’s ITC Maurya Sheraton took the traditional Peking Duck and turned it into a work of edible art.

The smaller stand alone Chinese restaurants were not far behind in the duck renaissance and places like Lings Pavillion at Colaba soon put Roast Duck on their menu.

This growing popularity appeared to be a bonanza for an avowed duck lover like me who fell in love with this delicious rich, complex characteristically gamey meat when I first tasted the French classic Roast Duck a la Orange many, many years ago

When India Jones, the Pan Asian at The Oberoi in Mumbai decided to have a Duck Festival Menu a short while back, it was a runaway success. A restaurant with an entire menu with just duck dishes running to an almost full house? Surely a sign that duck has finally arrived as a popular meat in India. Or was it? I decided to investigate further…

While working my way through platters of Crispy Duck, Duck Dumplings, Duck Curry and crispy Duck Popiahs (spring rolls), I grabbed the opportunity to talk Duck with Executive Chef Joy Bhattacharya. Duck, according to him, was a very popular meat in ancient India when hunting was a royal pastime and game such as wild duck, guinea fowl, wild boar and pheasant enjoyed a place of pride at royal tables around India. As royalty ceded its way to democracy, hunting was one of the royal sports that silently gave up the ghost and the wild game that graced the royal tables made way for the domesticated and farm bred chicken and fowl.

Although duck still remains popular with the Anglo Indians and the Syrian Christians who make the most delicious duck curry and the famous Kerala Duck Roast, these communities are the exception rather than the rule and unfortunately, with the passage of time, most Indians have lost the taste for strong gamey meats. The bland chicken wins hands down in any taste test for the average Indian palate.

In Europe and China too, duck was originally a meat associated with royal hunts and was primarily seen in the imperial kitchens. But as time went by, commoners too started partaking of this royal meat and today Duck Pate en Croute, Duck Terrine, Confit of Duck, Pan fried Duck Liver and Canard à la Rouennaise (duck stuffed with its liver and cooked in red wine) count amongst the most famous of French dishes. And of course, It is impossible to talk of Chinese food without paying glowing tributes to the ubiquitous Roast Duck or Peking Duck. While the passage of time increased the popularity of duck in both Europe and China, the same passage of time wiped the poor delicious duck right off the Indian tables.

So what is it then that has made for the return of the Duck to the Indian table? Have chefs and restaurants become bold and decided to expand the Indian meat repertoire to include more game? Is it that the new breed of well traveled Indian consumers is more open to experiment with his meat? Or are we digging deep in our culinary past and rediscovering the recipes that graced the royal tables?

Unfortunately, from all prevalent trends, the answer is none of the above. The only duck dishes that have really caught the Indian imagination are the Crispy Aromatic Duck and Peking Duck.

A small note here about the difference between Peking Duck and Crispy Aromatic Duck which people often think are interchangeable.

Peking Duck, or Peking Roast Duck is a famous duck dish from Beijing that was was traditionally prepared for the Imperial Courts and is now considered one of China's national dishes. Ducks bred specially for for this dish are slaughtered after 65 days and rinsed thoroughly in water. Air is pumped under the skin to separate it from the flesh before the duck is blanched in boiling water for thirty seconds. It is then hung out to dry and the skin is glazed with simple syrup while the innards are again rinsed with a blast of water. After it has dried for a period of 24 - 72 hours the duck is roasted in a traditional hung oven till it turns a crispy dark brown. The hung oven was developed in the imperial kitchens during the Qing Dynasty and adopted by the famous Beijing Quanjude restaurant chain.

The Peking Duck is prized for the thin, crisp skin, with authentic versions of the dish serving mostly the skin and little meat, sliced in front of the diners by the cook. If done correctly, the skin is served first, dipped in sugar and garlic sauce. The meat is then served accompanied by pancakes, spring onions, cucumber and sweet bean or Hoisin sauce. The bones and remaining meat and fat are used to make a flavourful accompanying broth.

In Beijing a few years ago, we were advised to avoid the over-crowded Quanjude and experience our Peking Duck at Da Dong Restaurant. Not for a moment have we regretted that decision and were rather please to discover that this was the very restaurant Heston Blumenthal went to when he wanted to learn how to make authentic Peking Duck. The photographs below are from that memorable Da Dong dining experience. The Duck was exquisite. Tradition demands that the Duck has to be carved into 108 pieces and we that’s exactly what we got.

The Crispy Aromatic Duck on the other hand, though extremely popular and delicious is not a patch on the Peking Duck when it comes to texture and complexity. The Aromatic Duck is made by first marinating the duck with spices, then steaming it till tender and finally deep frying till crisp. The meat has far less fat and is drier and crisper than that on the Peking Duck. While some people claim this dish was invented in the UK, there is enough evidence to prove that it is is in fact a traditional Chinese dish and is still served in China with steamed buns. The UK version however serves it with pancakes and vegetables much like the Peking Duck and hence the occasional confusion.

Why have both these dishes caught the pseudo sophisticated Indian imagination? Think about it, duck that is either deep fried or roasted to a crisp with a crackling skin and smothered in sweet hoisin or plum sauce before being wrapped in a rice pancake with crunchy cucumber and sharp scallion! What is not to like?? The sweet sauce and pancake mask the gamey flavour and the crispy texture of the meat is tailor-made for the Indian palate. This is a dish for the trendy metros and the well traveled Indian who wants a taste of the exotic. But the growing popularity of these two dishes doesn’t mean that the duck delights that appeared at the royal tables are making a come back. Or even that duck meat is available in the market for the home consumer. The demand for duck according to Chef Joy is still so small in India that the few duck farms and suppliers, cater almost exclusively for the hotel and restaurant business and this is unlikely to change in the near future.

So for the moment, if I want to try a duck curry recipe or make a simple pan fried duck liver with a reduced port wine sauce, I still need to transport myself to foreign shores to sate my appetite or smuggle in some duck breasts from the UK and cook them in the cozy comfort of my home. If you do get your hands on a decent duck breast, this recipe of Magret de Canard aux Agrumes [Breast of Duck with Citrus fruits], and part of the curriculum at the Cordon Bleu London, is well worth making:

2 duck breast with skin without bone

2 Oranges, peeled and flesh chopped
Juice of 1 lime [since you do not get lemons in India]
25 grams sugar
15 ml white vinegar
250 ml chicken stock strong [use 50% more bouillon cubes than you otherwise would]
A teaspoon of Orange marmalade
Cold cubed butter to finish

Caramelize the sugar in a heavy bottomed pan. When it turns a deep amber colour add the vinegar. Careful, it will splatter and the fumes are powerful. This is known as a Gastric. Once slightly reduced add the Orange segments and marmalade and reduce heat. Cook on low heat till orange breaks down. Add the stock and reduce till you get a slightly syrupy consistency. Remove from heat, strain into clean pot. Check seasoning and keep aside till duck is cooked.

Just before serving heat sauce and whisk in a couple of cubes of butter. Do not boil. Adjust with a dash of lime juice to brighten flavor. The sauce should be sweet, sour and savory at the same time.

Dry the breast with a kitchen paper. Score the breast skin side in a cross hatch/diamond pattern taking care to score to the very end.

Take a heavy pan and put the breast skin side down in the cold pan, turn on the heat to about half. Don’t touch the pan, don’t move the duck, do absolutely nothing. Wait 10 minutes. What will happen is that the fat will render and the skin will start to crisp up. I repeat, just don’t touch the breasts or pan. After 10 minutes, season the flesh side and turn over for 2 minutes more. Turn off the heat and let the Duck rest in the pan off the heat for about 5 minutes while you finish the sauce.

To plate, slice the breast at an angle and pour the sauce on. Garnish with chopped Chives or Flat Leaf Parsley.

Best eaten with some sauté Potato.


A few paragraphs from this article written by the Queen of Kutch were published by the Hindustan Times a few years ago. This is the complete, unedited version. 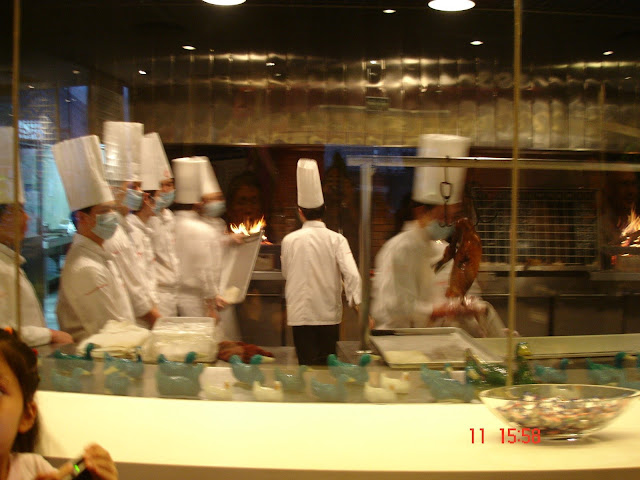 Posted by Stonethrowers Rants at 6:50 PM

Email ThisBlogThis!Share to TwitterShare to FacebookShare to Pinterest
Labels: Eat In, Eat Out