Let me start by reproducing what I had written in a previous post on Bologna. Bologna is also known by three nicknames:

·     "the red one" (la rossa), originally referring to the colour of the roofs in the historic center, became later connected to the political leanings of the city i.e. Communism.

This post is about the fat one, the glorious food of Bologna.

First, two abbreviations for you to understand. The Italian Government classifies food products as DOP and IGP. IGP is Indicazione Geografica Protetta (Indication of Geographic Protection). The IGP label shows that the quality or reputation of your food or condiment is linked to the place or region where it is produced, processed, or prepared. DOP is Denominazione d’Origine Protetta (Protected Designation of Origin). The DOP label guarantees that your cheese, prosciutto, olive oil, etc., is produced, processed, and packaged in a specific geographical zone and according to tradition. Each step, from production to packaging, is regulated.

Bologna is located in the Emilia Romana region of Italy. This region has the maximum number of DOP & IGP certified products for all of Italy, a mind numbing 44 products are certified as DOP or IGP. The most famous of these are known and eaten by every one of us. Parmesan cheese, Parma Ham, Balsamic Vinegar and many many others. The quality of food and wine so certified is top class.

Not only are these ingredients superb but, the food indigenous to Bologna is similarly eaten world over. The dish Spaghetti Bolognaise and Lasagna Bolognaise would certainly be something you would have eaten. It originated in Bologna, hence, obviously, the name. In Bologna this is known as Ragu and is served not with Spaghetti but with Tagliatelle.

As I had written earlier on the days we were scheduled to be in Bologna there was a huge trade fair. The moment we know this we made bookings at two of the more well-regarded Bologna restaurants – Diana and Al Pappagallo.

Our first dinner was at Restaurant Diana. This is an old Bologna restaurant located close to our hotel. We had a reservation for 7.30 and before that we went to a wonderful Wine Bar opposite the restaurant. We had two glasses of wines, of the choice of the server. Nice wines, just 4 Euro a glass. At 7.30 we crossed the road and entered Restaurant Diana to be greeted and taken to our table which had our name written on it. The waiters were dressed in white coats and black trousers, Old waiters, guys who know everything and have seen everything. We like this sort of restaurant and staff. A bottle of the local wine Lambrusco was ordered. Lambrusco is a delightful wine, it is a red and, unusually for a red, it’s a sparkling wine, very refreshing. The Sorbara version is light, fizzy and clear. Without sounding facetious, this tastes like a light, less sweet Bacardi Breezer.

To start we initially ordered a plate of mixed “cold cuts”. The plate had a selection of Salami, Mortadella and Castello local cold cuts. Salami I presume you are familiar with. Mortadella is a pork product made with very finely minced, pureed pork, heat treated and flavored with spices. This is formed into a cylinder of diameter ranging from 5 inches to a huge 12 inches. This is a cooked product and is eaten either thinly sliced or even cut into pieces.

Culatello is even more delicious. The rear leg of a pig is used to make Culatello which is a cured product. A Parma Ham uses the whole leg, bone and all. For Culatello, a portion of the muscle is removed leaving the bone and remainder of the leg. The portion used for Culatello is then wrapped with twine, dried and cured. When ready, it is thinly sliced and eaten. The texture of Culatello is very “melt in the mouth” much more than Parma Ham. 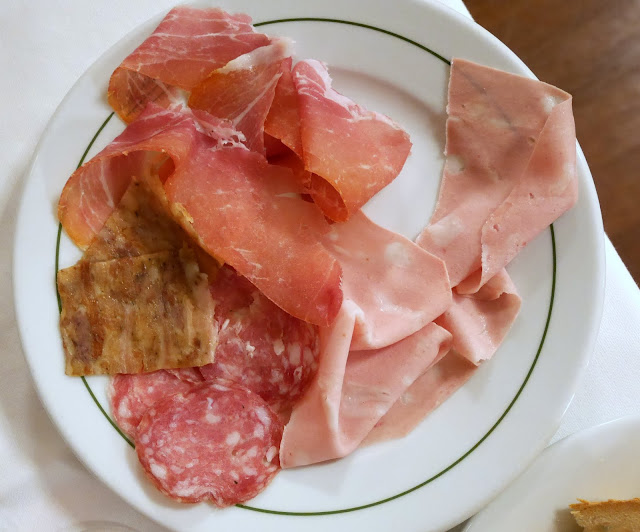 This was delicious, so we ordered a further plate of just Mortadella 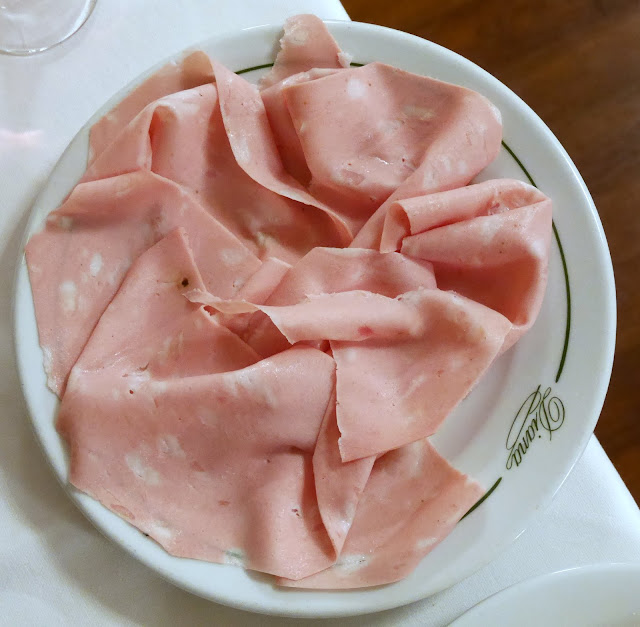 For our first courses, the choices were obvious. Tortellini En Brodo for HRH the Queen of Kutch and Tagliatelle Ragu for me. Outstanding. The biggest difference between the Bolognaise sauces we are familiar with have a lot of tomato and are quite sloppy in consistency. This was drier and far more intense in taste. The Tortellini En Brodo was enjoyable and comforting. 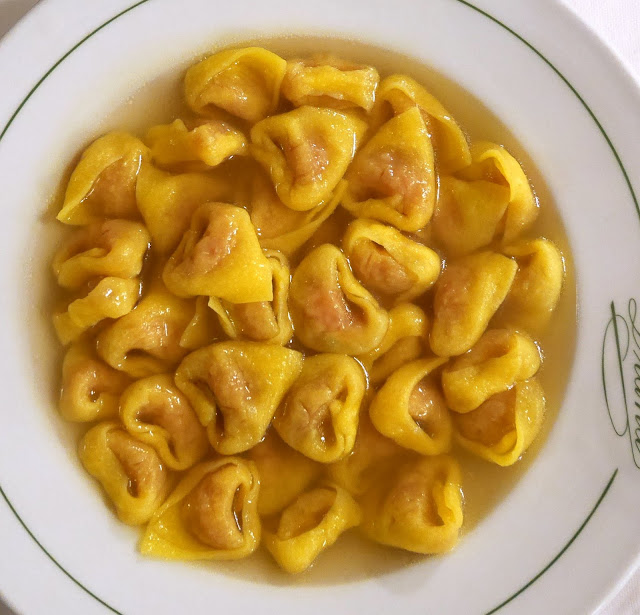 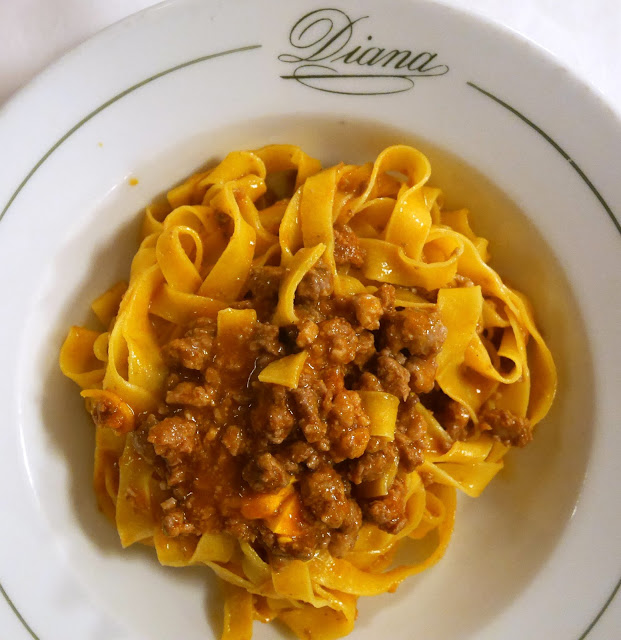 Main courses were again classic Bolognese food. HRH the Queen of Kutch ordered from the trolley. This was 5 meats all boiled and served with a sauce comprised of the liquor – Turkey, Chicken, Pork, beef and Lamb. Boiled Meat or Bollito Misto is available all over Italy. Often the meats in question comprise offal, but this selection was more mainstream. A very good dish, however it was a large portion so was not entirely finished. 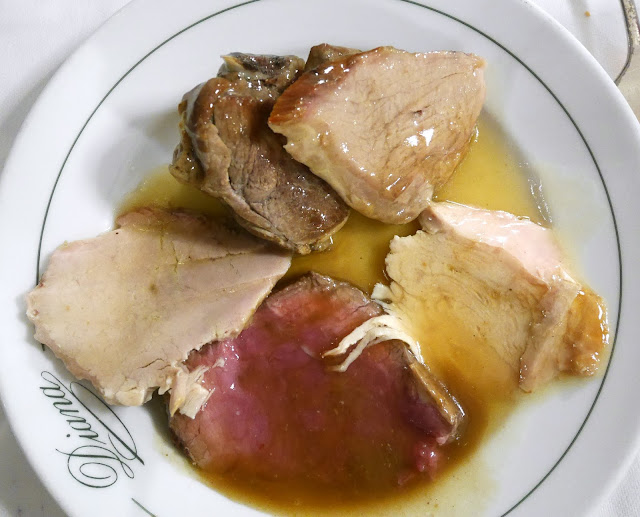 I ordered the Bolognese Cutlet which is a variation on the Veal Cordon Bleu. A Veal cutlet is breaded and fried. Then some ham is placed on top of the cooked Veal, and that s topped with Parmesan and gratinated. Very nice, though simple. A side of grilled Artichoke was ordered. 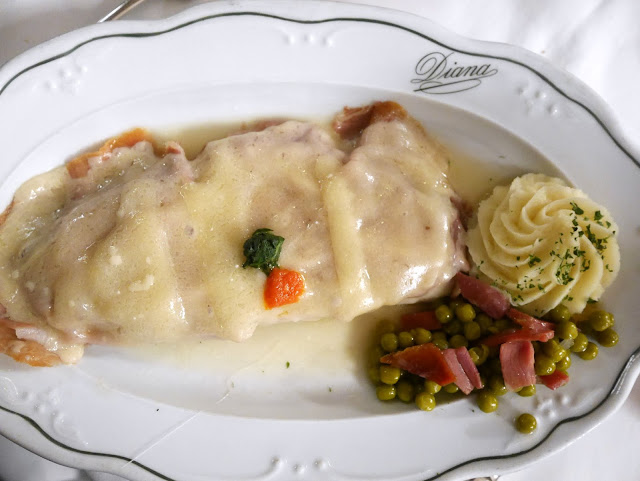 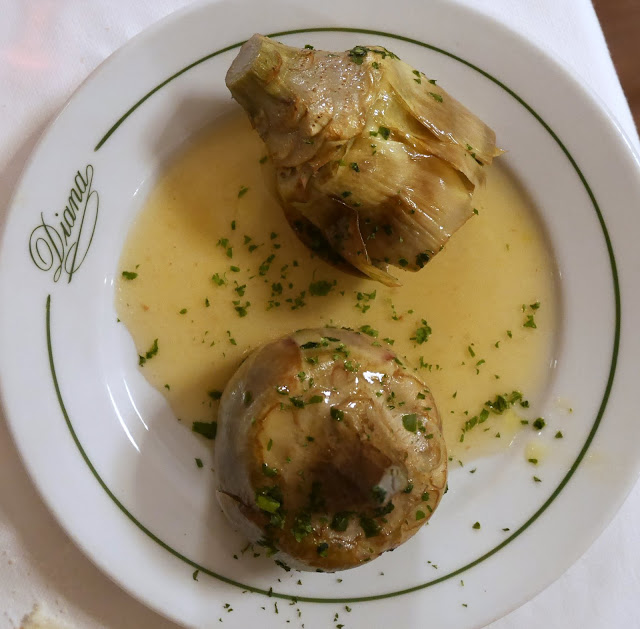 Restaurant Diana was excellent. Service was very pleasant and our waiter was a particularly funny chap. A most pleasant evening.

The nest day we had our mega meal at Osteria Francescana so dinner had to be a little more frugal. In the area known as Quadrilatero which is the old market area comprising of shops selling pasta, food, meats and fish. Many restaurants line the streets in the Quadrilatero. We chose La Baita Formaggi in the Via Pescherie Vecchie. Chaotic, noisy and charming. We sat on high tables on the narrow street and ordered a plate of cold meats and glasses of Campari Spritz to start. Do have a look at the photographs. An absolutely wonderful plate of food. After finishing the meat, I still peckish, so I had a small portion of Lasagna. Tasty, with one major difference from what we are familiar with in India. The pasta is made with spinach so it is green, there is far less sauce so the dish is stiffer and not as sloppy as we are accustomed to. A most enjoyable and fun meal. 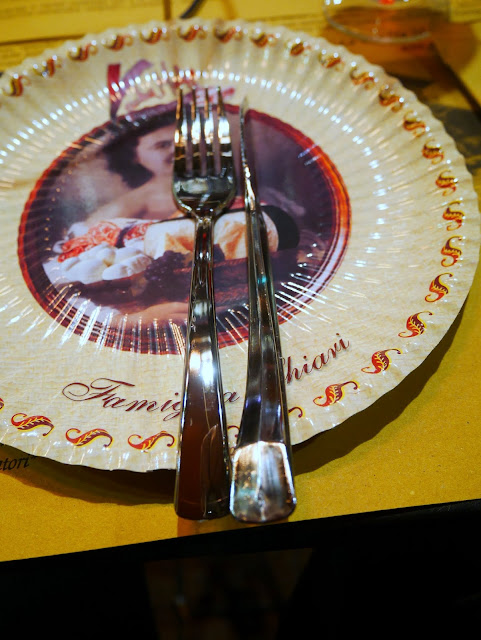 The plate is paper and the cutlery is plastic, coloured in shiny silver. Clever 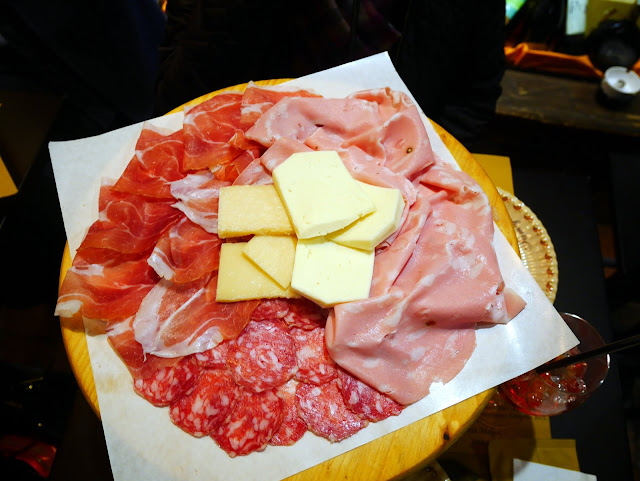 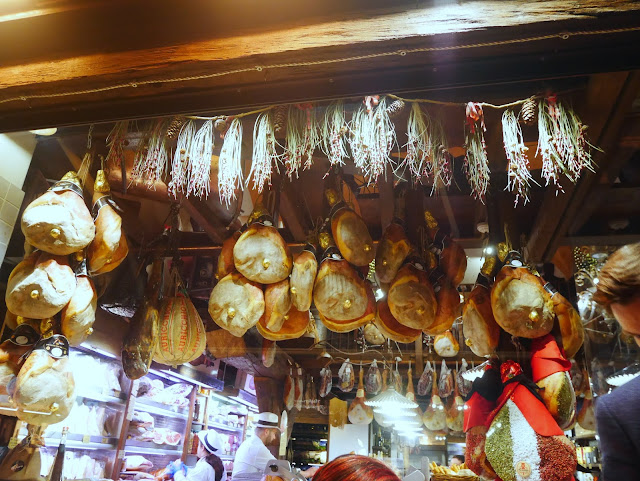 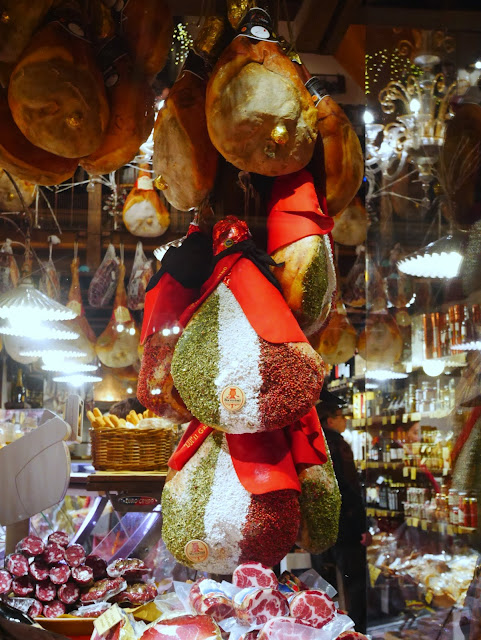 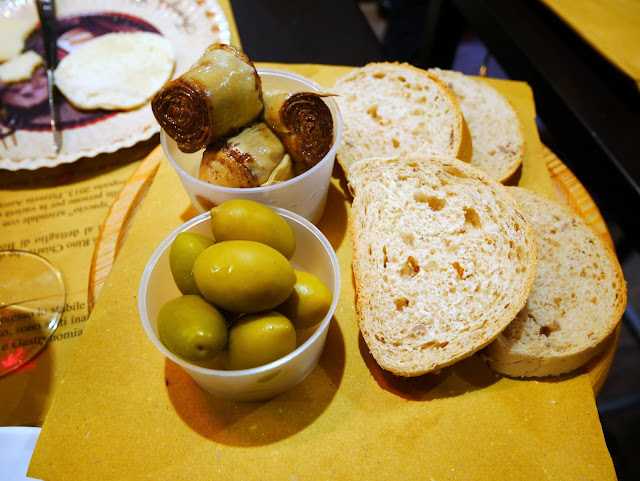 A plate of Olives and pickled vegetables 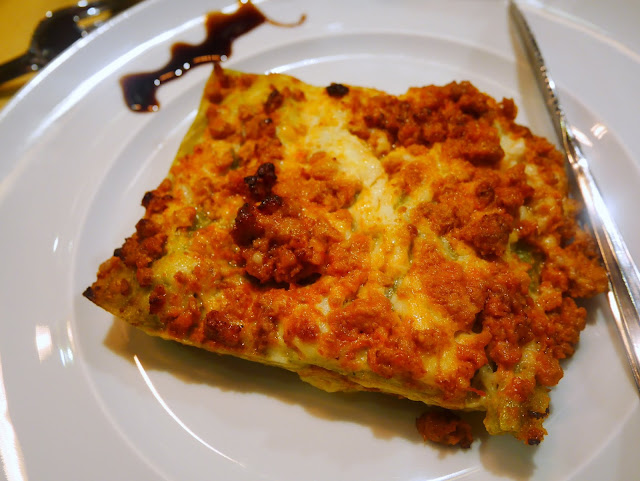 The next day was a rainy day. We had done our long walk to the Madonna of San Luca Basilica. We fortified ourselves with drinks at a local bar, an actual bar - not a Tabbachi with a bar or a wine bar – and walked to Al Pappagallo another famous Bolognese restaurant. Much more sophisticated and swish as compared to Diana, though it appeared that prices were slightly lower than at Diana. A bottle of Lambrusco was ordered and we settled down to eat our now almost obligatory starter of local meats. 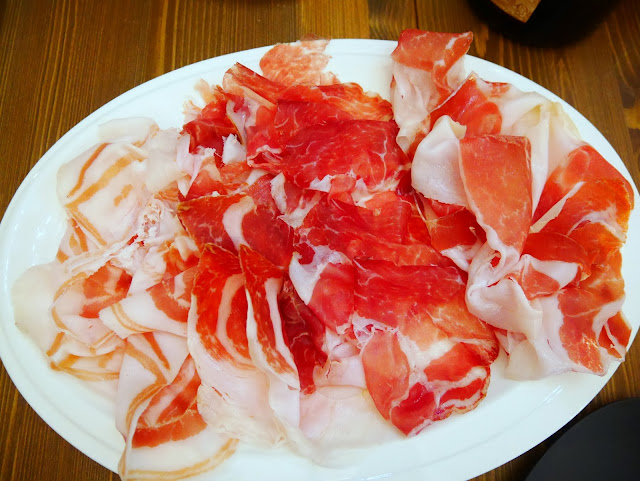 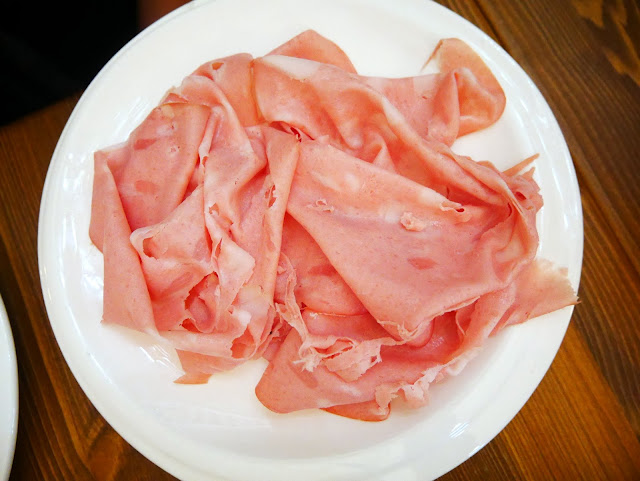 Main courses were specialties of Al Pappagallo. A Tagliatelle Ragu for HRH the Queen of Kutch which had more Ragu than at Diana which you can see from the photograph itself. The actual Pasta at Diana was better while the Ragu at Al Pappagallo was better. I ordered the Beef Cheeks stewed in Red Wine. They were good but should have been cooked a tad longer. The dish photographs very badly. Apologies. The vegetable was grilled Radicchio or Endive. Bitter sweet and just right with the richer sauces. 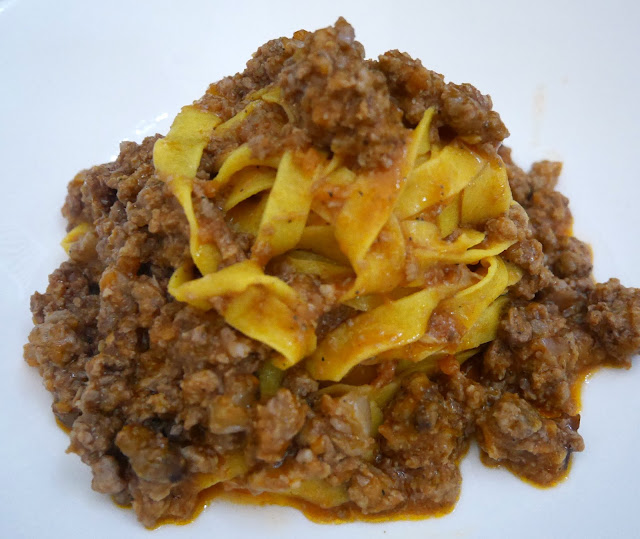 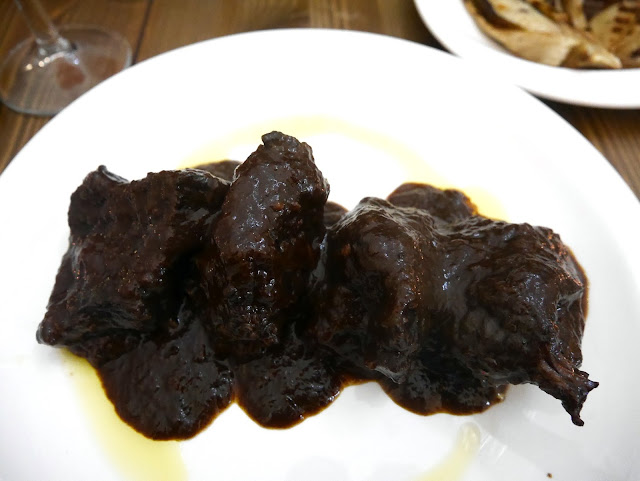 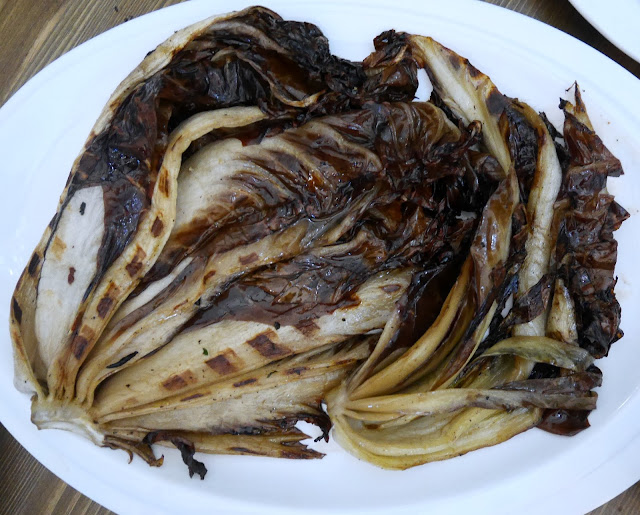 AF Tamburini is a legendary store that sells meat and pasta in the Quadrilatero. They also have a café where their meats are sold as also hot food cafeteria style. Very popular with the American tourists. Some more cold cuts but with the addition of some Burrata topped with Fig Jam. I had a plate of thinly sliced Porchetta. Porchetta is a Pork belly, sometimes encasing a pork loin, with herbs, rolled, tied up and roasted. So, you get crunchy crackling on the outside and different textures of Pork on the inside. This was served with pickled vegetables, to cut thru the richness of the Pork. All this was washed down with a glass of refreshing and restorative strawberry puree and Prosecco. 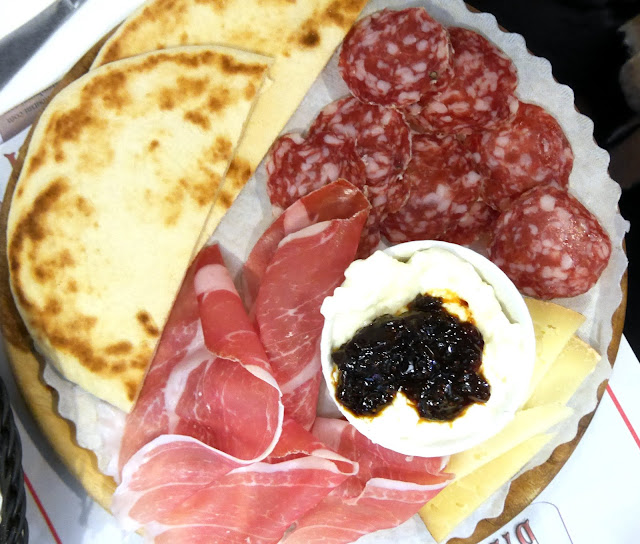 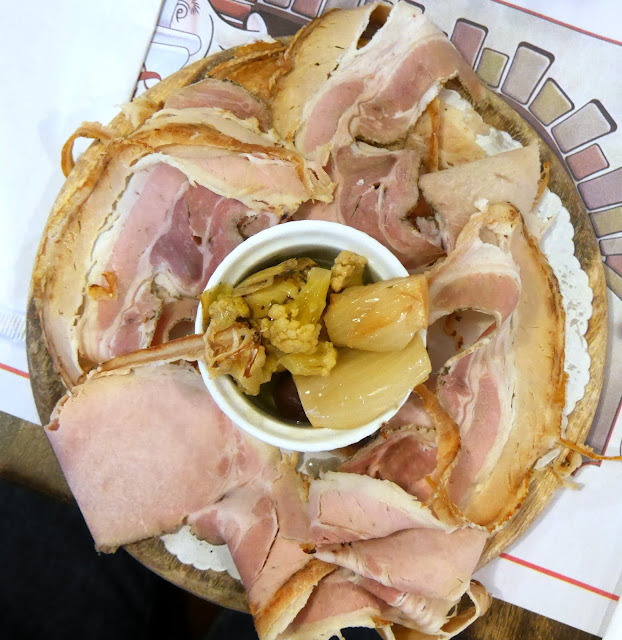 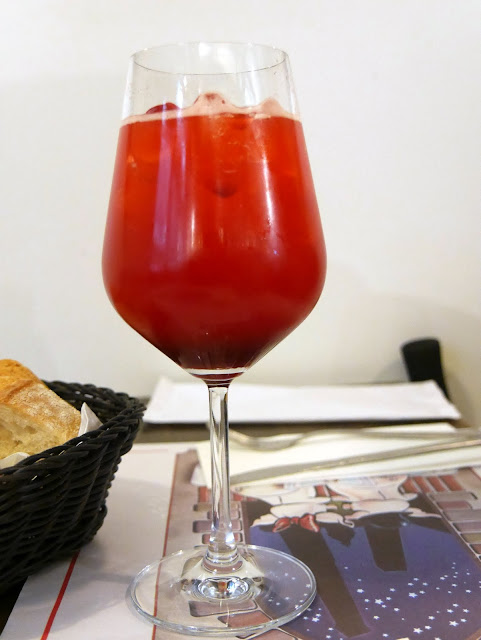 Dinner on the last night was at yet another traditional Bologna restaurant – Da Cesari located just behind our hotel. HRH the Queen of Kutch swore that we had eaten at the restaurant when we had last visited Bologna. My mind was blank, I had no recollection. To prove me wrong, she pulled up an email she had written when we had last visited and that email mentioned that we ate at Cesari. So there, the Queen is always correct.

Starters had to be a plate of dried meat. This was our last meal in Italy after all. I ordered a specialty of Cesari a Artichoke Flan with a Parmesan Sauce and some grilled Artichoke on the side. This was a lovely little dish. Enjoyed it. 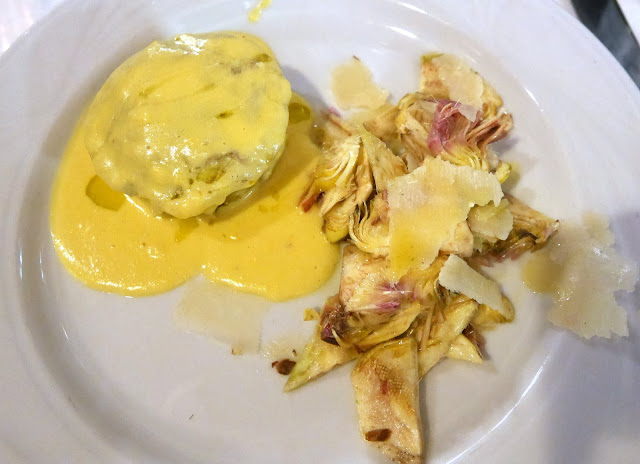 First courses were two pastas, I had Ravioli stuffed with Pumpkin and finished in a butter sauce. HRH the Queen of Kutch had Green Ravioli with Rabbit, also finished with butter. Both dishes were a little disappointing as the actual pasta was quite thick.  HRH the Queen of Kutch did not want a main course. I still had some space left as I had the meatballs with peas. A simple tasty dish that just hit the spot. No mounds of pasta, just a few meatballs in a rich sauce. I loved this. 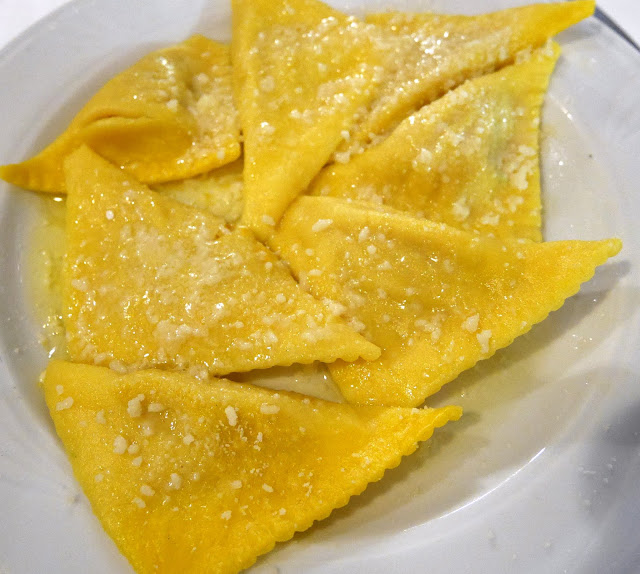 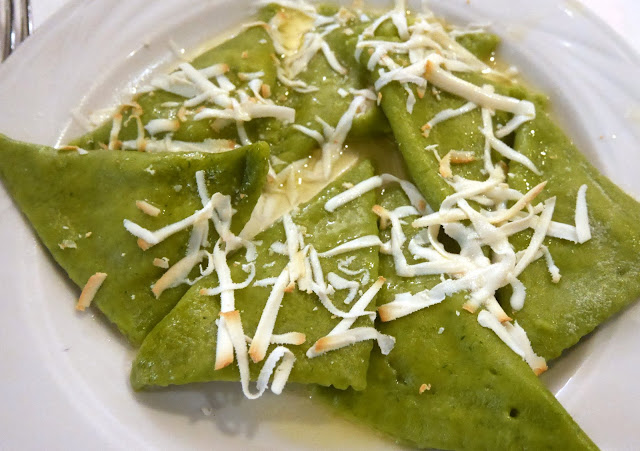 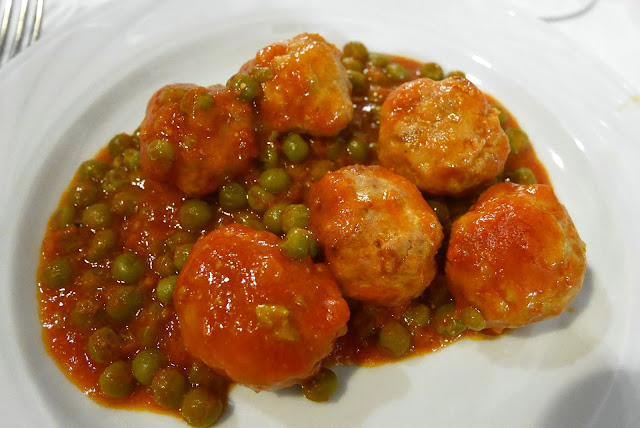 Food in Bologna was really very good. It was surprising how reasonably priced the food was. From coffee and pastry in the morning, to mad day sandwiches, to lunches and dinners the food is plentiful, reasonable and most importantly, delicious.

Food is more than reason to visit Bologna. We ate very well.

Posted by Stonethrowers Rants at 10:48 PM