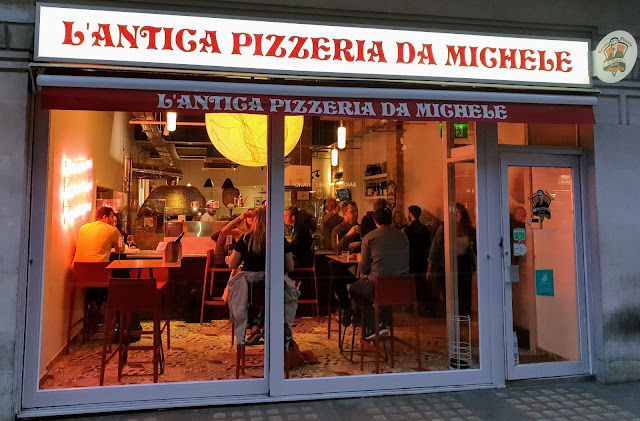 The location is barely 2 doors away from the Lloyds Bank at Baker Street the site of a major robbery in 1971. The thieves had rented a leather goods shop, two doors away from the bank, and tunneled a distance of approximately 50 feet. To avoid being overheard, they dug only during weekends. Almost 3 Million Pounds were stolen and the robbers wrote a message on the wall reading “Let's see how Sherlock Holmes solves this one”.  Baker Street being the home of the fictional detective Sherlock Holmes. A movie made in 2008 called "The Bank Job" starring Jason Statham was based on this robbery.

Anyway, back to the world’s best pizza.

L’Antica Pizzeria Da Michele opened in Naples with origins that can be traced to 1870. Since then it has been 5 generations of the same family that have run the business. The original pizzeria in Naples is highly regarded and is often referred to as “the Sacred Temple of Pizza.” Recently, the family has opened pizzerias in several cities, Rome and London being just two. 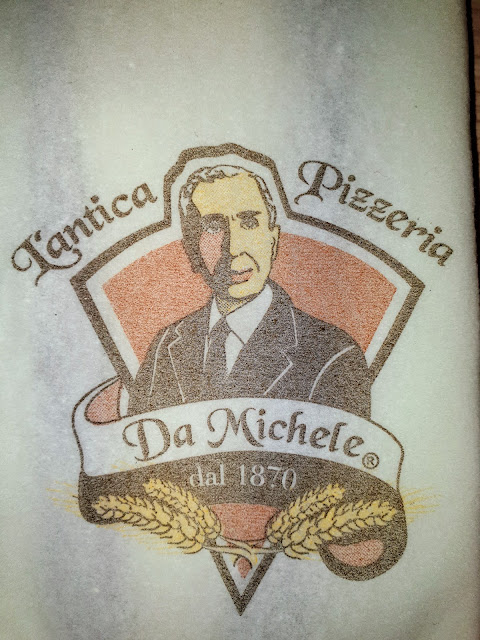 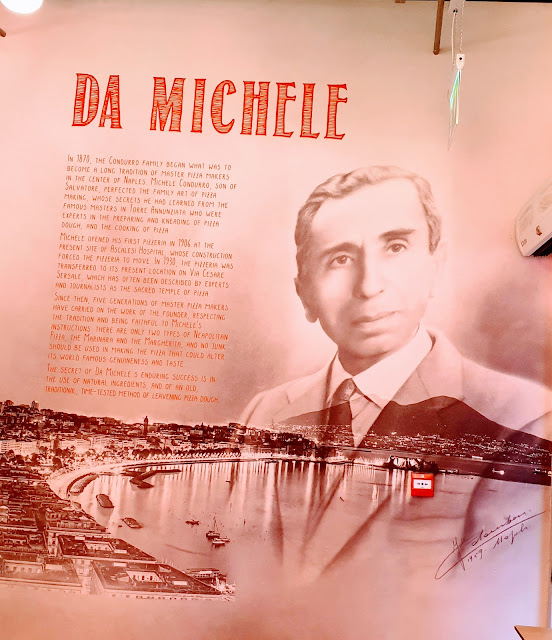 Now L’Antica Pizzeria Da Michele does not serve up any old pizza, no sir, they serve the authentic Neopolitain pizza. You may well ask what is an authentic Neopolitain Pizza? The answer is simple. A true Neopolitain Pizza has to comply with the simple yet exacting rules set by the Associazione Verace Pizza Napoletana. These rules set down the type of tomato to be used – San Marzano or Roma only – the flour, the kneading and so on. A crucial rule stipulates that the oven temperature should be a rather staggering 485 to 500 Degrees Centigrade and the pizza be baked for between 60 to 90 seconds. The searing heat produces a characteristic Leopard skin pattern on the crust. Mind you, your home oven will not get hotter than 250 Degrees Centigrade which is barely half of what the Association stipulates, so forget about making one at home.

We had made a reservation and on reaching were escorted to a table by the windows. What strikes you as soon as you entered is the heat emanating from the oven. The oven was some distance away in the center of the room. The pizzeria was very busy. Not only was the place quite full but you had a continuous stream of walk in’s either doing a take away or delivery boys taking away ordered pizzas. 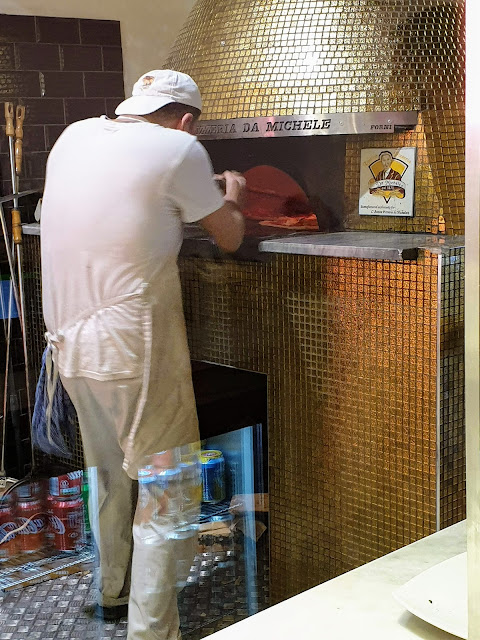 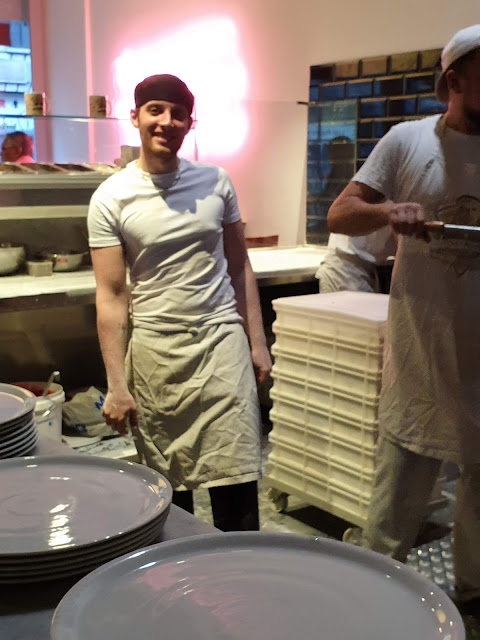 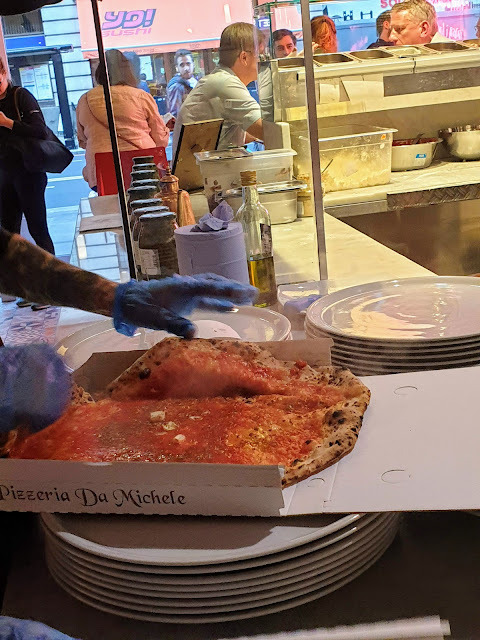 Above: You can see how large the pizza is. The box is inadequate.

The original L’Antica Pizzeria Da Michele in Naples offers only 2 pizza’s the Marinara which has tomato, garlic, oregano and olive oil [no cheese] and the Margherita which has Basil instead of Oregano and Cheese. Here in London the menu is expanded with them serving 6 pizza’s, 1 Calzone and a fried Pizza. You have just the pizza on offer, there is no question of customising it. There are no extra toppings one can opt for. No, extra onion, capsicum, barbeque chicken Jalapeno Baby Corn or God forbid, pineapple. You get just one size of pizza. There were also starters and desserts.

In Italy, it’s almost always beer that is drunk with pizza, while in London, people drink wine. So, a bottle of white was ordered along with a platter of Charcuterie and Mozzarella. This was a large platter with 5 different Charcuterie. Also served was simple deep-fried pizza dough called Nodinis. They were light, airy and non-greasy, delicious to break off and eat with the meats. Reasonably good quality stuff. Just right and hit the spot. 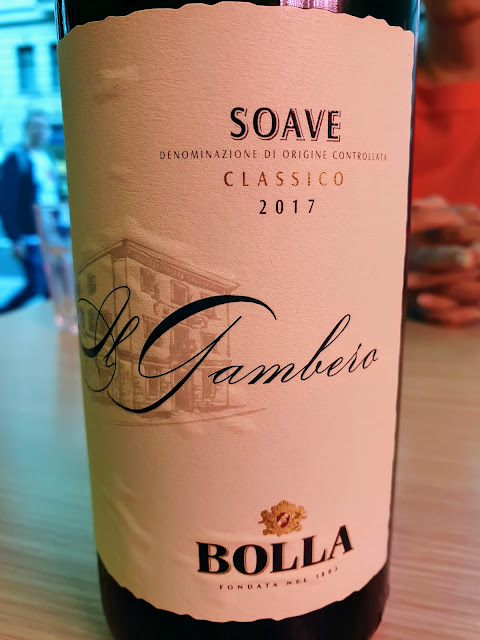 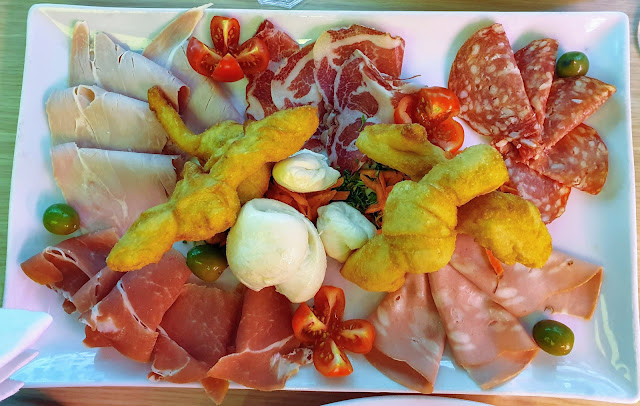 Above: The golden stuff is the delicious light Nodinis

The pizzas we could see were large. The Associazione Verace Pizza Napoletana rules mandate that the pizza should be no smaller than 31 cms diameter. That is well in excess of 12 inches. There was no way we could have ordered two Pizza and finished them. Neither could we box them which is what lots of tables were doing, as we were catching a flight the next morning to return home. A Napolitana Pizza was ordered which was basically the Margherita with Anchovies added. We asked the server to have the pie sliced so that handling would be easier. What turned up was large, looked delicious and was really really hot. 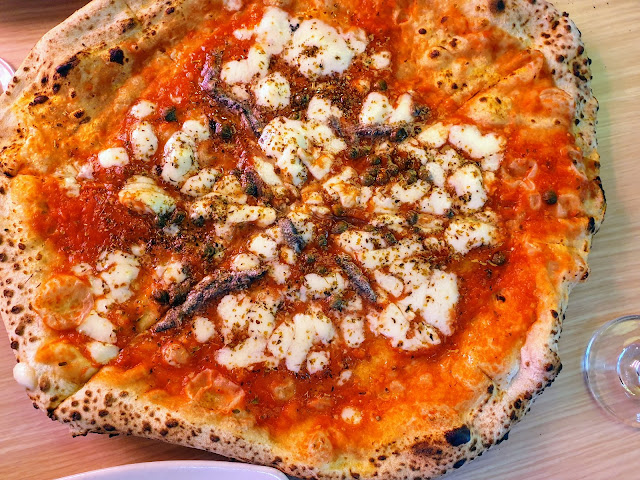 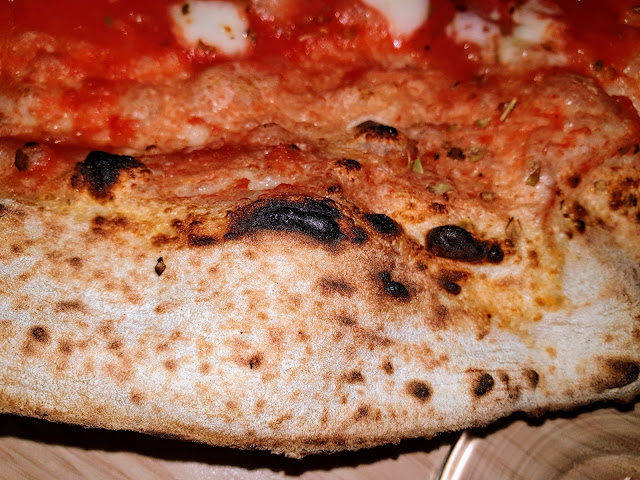 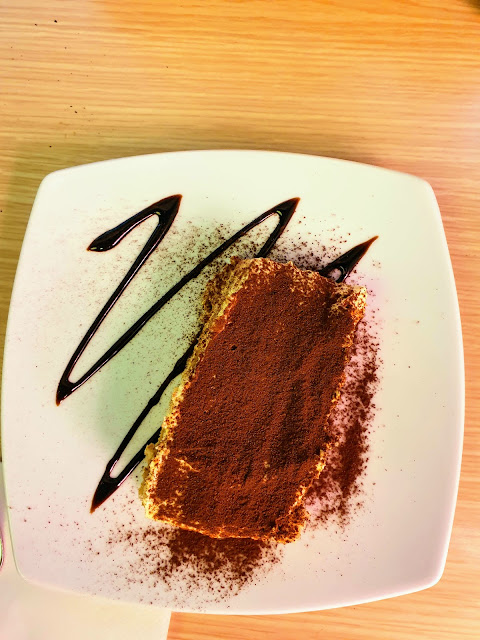 We have eaten some decent pizza in London at our favorite Delfino. This however was a class apart. There were obviously several small differences and enhancements between a decent pizza and an authentic Neapolitan pizza. The biggest elevating or distinguishing factor, according to me, is the sheer heat of the oven. The heat manages to thoroughly cook the base so you are not left with the proverbial soggy bottom. The moisture on the base is contributed by the sauce. This is a floppy pizza and not the papad crisp kind so beloved by us Indians. The cooked and thin crust meant that you were not made full by eating masses of dough, the pizza was actually light. Contributing to the lightness was the minimal sauce, just a single topping of salty anchovy and a sprinkling of Mozzarella, not fistfuls of processed cheese. This was good pizza, a marked difference from anything else we have ever eaten.

We thoroughly enjoyed the pizza. I must caution you, if you are used to Indian pizza which is almost always over sauced, extremely spicy, over topped and laden with cheese, this authentic Neapolitan pizza is difficult to appreciate. You may well feel shortchanged.

Posted by Stonethrowers Rants at 3:54 PM