Dubai, and the journey there. First impressions, all biased and full of prejudice, made without complete knowledge, understanding or cultural and social sensitivity.

A preface. I was last in Dubai some 18 to 20 years ago. Since then it’s changed, grown and become a bigger influence on our lives as Indians. Not only does virtually all of Kerala work in Dubai or the `Gelf’ but so many others. Every one of us knows or has someone personally who works in or has a business connection with Dubai. HRH the Queen of Kutch has never been here. We are here to watch the Formula 1 Grand Prix in Abu Dhabi this coming weekend. This whole journey is one of discovery for us, a change from the norm, a big change from the norm.

First up, we are not flying British Airways but Emirates. That was shocking enough. Check in at Mumbai airport was a bit of an eye opener, quite wild and staff who are obviously driven mad, stark raving mad by Indians. Everything is a bit out of control and shouting is the norm, almost. The airport was chaotic as at the same time as our flight we had 3 to 4 other flights also going to other parts of the `Gelf’. You can imagine the passenger profile and the deranged behaviour at the security counters. You may want to know what I mean by `wild’. Well have you been to particularly a Mainland China branch on a Saturday or Sunday evening and seen the slightly mad atmosphere? Children running around, waiters barely keeping control? That is what I mean by wild.

The Emirates lounge was a relief, and I must say with all honesty a very good lounge with some rather good breakfast on offer in a buffet. Nothing out of the ordinary but just very well made, good quality, attractive food, scrambled eggs, hash brown potato, sausages, cereals and the bog standard Sambar Upma Idly. The flight was good and the onboard entertainment system was astounding. Not only was the variety of the entertainment on offer huge but the efficiency of the system was excellent to say the least. The icing on the cake as far as we were concerned was the staggering efficiency of getting our car to take us from the airport to our residence. A sign indicating where the facility was available, the welcome and telling them my surname was the only communication. Probably 10 words in all, and we were in the car, on our way. No talking, no shouting, no gesticulating, no deep breathing no feeling of getting ripped off. Amazing. If only we could achieve this anywhere in any service at any price point in India. Mind you it’s the same Indians in Dubai behind and in from of the counter as you would have in India. Sigh!

Soon we were on our way, without a word being exchanged with our driver [he had the details of our address] in a fast car on a shockingly wide road known as the Sheik Zayed Road. This was a 12 lane highway running as straight as an arrow all the way from the Airport to the port of Jebel Ali. Quite impressive.

Very nice airport, very few people in the airport, actually very few people anywhere except in the shopping malls. Being a Thursday, public transport in Dubai is free, that is you pay nothing. We do have a sort of unwritten policy, which is that if there is a subway/train in any city we must use it. Yes, we have been on the Delhi Metro, and we travel by train in Mumbai many times a week, we have 1st class passes! Anyway, before I digress, the Dubai Metro is what we got onto. Brilliant. Brand new trains, brand new stations and everything neat and clean. And, the trains have no, I repeat, no drivers. I have only one word. Sigh!!!

We did do a quick reccee of a mall before we got tired and got back. We do have a booking made for a visit to the top of Burj Khalifa the world’s tallest building, we do want to go to the famous underwater aquarium and zoo as they call it, we do plan to visit the iconic Palm and we will be flying on the famous A 380. So the theme of this visit would be best described as man-made marvels.

Dinner was to be at a Turkish Restaurant. One branch is located on The Walk which is on the Jumeirah Beach Road. This is a long promenade that runs along the beach. Now, the beach is cordoned off, probably awaiting a new development. The promenade is quite nice and has a good European feel to it. Unfortunately there are just too many neon hoardings to really make it pretty. I believe that none of the restaurants on the Walk are licensed, i.e. no booze. To drink you have to go into a bar in one of the 5 star hotels that also run along the Walk. So we did. We went to an Irish Bar in the Sofitel. Talk about artificiality. A French hotel in the Gulf with an Irish Bar. What amazes me is how cold the beers are. Really cold. No excuses folks, Dubai is hotter than India so refrigeration is as big a problem. Does no once care? Do punters know no better? Sigh!!

After a couple of reasonably priced i.e. AED 40 or INR 600 for a 500 ml beer in a 5 star hotel we were ready for dinner. Kosebasi is the name of the Turkish Restaurant. The Turkish are good at grilling meat and fish. Their kebabs are really their signature dishes. The Mezze offered are by and large generic across the whole Middle East. You will get Humus, Aubergine roasted, Vine leaves stuffed, Labneh, Baba Ganoush in some form or the other in Israel, Lebanon, Turkey, sometimes in Greece and throughout the Gulf.

To start we ordered `Enginar’. This is a cold salad made with heart of Artichoke, Peas, Potato and Carrot and is dressed with a simple Olive Oil and Lemon dressing. This was tangy and refreshing.   Along with this we ordered a mix of the traditional Turkish `Pizza’ called `Pide’ or `Lahmacun’. We got 6 cocktail sized Pide, [two apiece] one had minced meat smeared on top, one had a cheese and the third, a rather disappointing spinach stuffed bread. The spinach Pide was sort or enlivened by the juice from the complementary pickles. 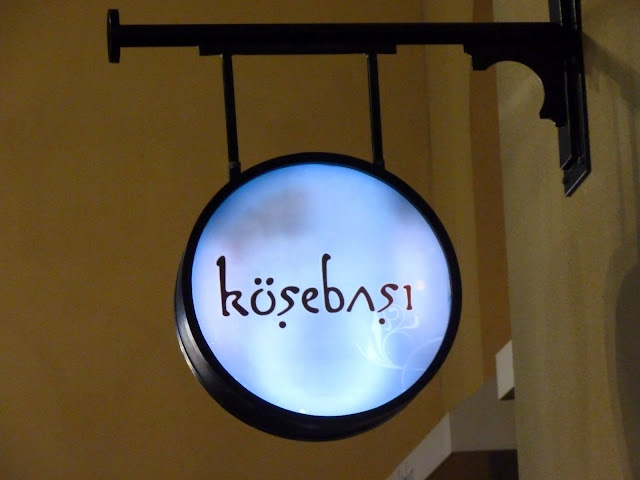 For our main course HRH the Queen of Kutch wanted to have the `Yogurtlu Kebap’. This is minced lamb grilled, much like a Seekh Kebab served with a Tomato sauce and Yogurt. This was quite nice. I ordered a `Saslik Kebap’ this was marinated Beef sliced grilled with Onion. The quality of the meat was excellent, as the cliché goes, melt in the mouth. Both dishes were quickly demolished.


To wash all this down, since there was no alcohol we had another Turkish speciality `Ayran’. This is a cross between a Lassi and Chaas. We have had several glasses in Turkey during previous visits. An Ayran is truly delicious. While it’s the same ingredients as Chaas its texture and flavour are slightly different. I had a plain while HRH the Queen had a Mint flavoured.

All in all a decent meal at a decent price in a decent location. Worth going.
Posted by Stonethrowers Rants at 12:31 PM