Singapore is the 4th country in Asia along with Japan, Hong Kong and Macau to have a Michelin Restaurant Guide. The 2016 Michelin Guide has:

One thing that is clear is that starred restaurants in Asia cannot be compared to starred restaurants in the UK and Europe. Different standards and criteria apply. What exactly the differences are is difficult to list as this is a trade secret for Michelin. I believe it is inconceivable that the equivalent of a hawker stall in Europe would ever get a Star in Michelin. 2 hawkers in Singapore do. All I can say is that you treat Singapore in a silo and Europe in another.

We were travelling to Singapore in the peak holiday season. To us, eating in a French restaurant in Singapore seemed rather pointless, but, we did want to eat good food and what could be a better test than a restaurant with a Star in Michelin? So, anticipating a rush, we had made a reservation at Summer Pavilion at the Ritz Carlton. This describes itself as a contemporary Cantonese restaurant and had been presented with a Star in Michelin. 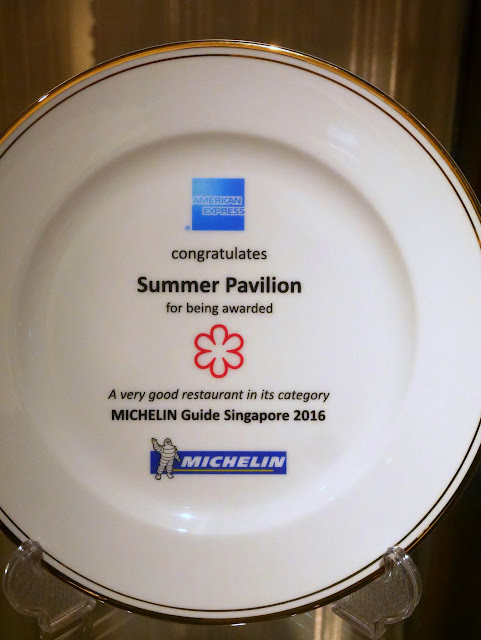 Summer Pavilion is a large restaurant with, what I thought, was a lot of covers – 119 seats and private rooms to boot. The wait staff were smartly dressed in black trousers and cream jackets. We were there for dinner, which meant that the “Pavilion” aspects of the place i.e. open to sky summer pavilion and the Dim Sum and the High Tea, were not visible to us. The restaurant was renovated in November 2015 and raised to this standard. The crockery was especially attractive. You had Chinese motifs on the crockery and had varied colours, as you will see in the photographs. In front of each diner was a small bowl of really high quality Premium Soya Sauce, crystal clear, salty, Umami and savoury. You needed just a drop, if at all, to give your food a kick. All very pleasing. 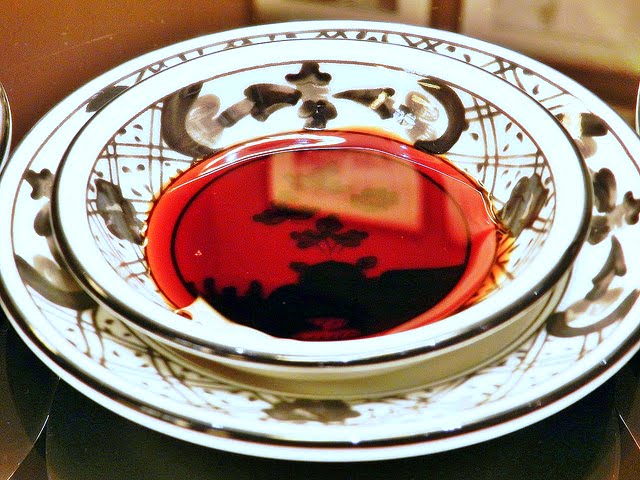 Menus were handed out, a main menu, a tasting menu, a Chef’s special menu and a drinks menu. Of course some of the dishes, as is the case with these high end places, were very expensive. These comprised of the usual suspects, Abalone, Birds Nest and live Seafood. Orders were placed. One dish that we all wanted, a Claypot of Stewed Pork, Bitter Melon [Karela] & Onions  was unavailable. This was heart-breaking. Anyway there was plenty to choose from.

We were then asked two questions. First was how did we want the Peking Duck served? Skin separate with pancakes and the meat? With rice? No we said, the meat can be served on its own was our reply. The second question was did we want the food to be served all at once  or course by course? We answered, course by course. Now, we are used to getting Chinese food in batches. The first batch would be the appetisers, then the soup if any and lastly all the main courses together. I thought that our answer would mean the food would be served in batches. Alas, I was wrong. We got our entire meal one dish at a time. After the initial shock, we all found that this was a good way of eating. You could actually eat one dish at a time and get all its flavours rather than the mish mash of a meat dish, a fish dish a vegetable and a noodle all jostling cheek by jowl on your plate.

First came the ½ Peking Duck we had ordered. It was displayed when I was on `natures call’ and by the time I returned, the Duck was being carved. So, no photo of a beautiful golden burnished Duck. The very crisp skin was removed, delicately dipped in Hoisin Sauce and wrapped in a gossamer thin pancake and served to us. A serving of artistically cut Spring Onion wrapped in a red Capsicum was served alongside, to make a modern twist on the classic dish. Excellent. 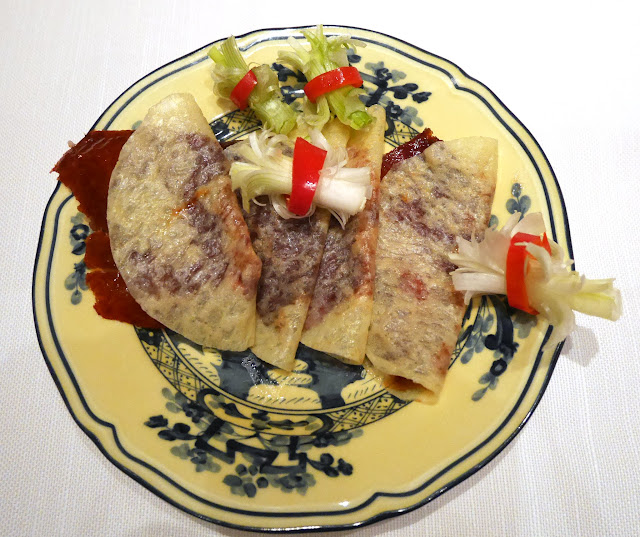 Then, came the first star dish of the meal ordered from the Chef’s Recommendation Menu – Razor Clams with Enoki Mushrooms and Spring Onions. Extremely attractive to the eye and delicious to eat. The Enoki Mushrooms and Spring Onions which had been separately stir fried and added to the steamed Razor Clams had a strong “Wok Hei”. I added a drop of the Premium Soya Sauce and I was in heaven. Top quality cooking. 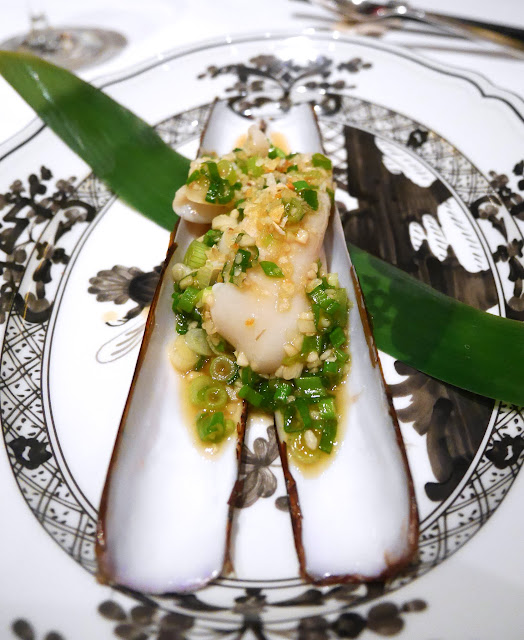 Once the Razor Clams were done the meat from the Peking Duck was carved, deboned and brought to our table with a Lemon Sauce accompanying the Duck. This was tender Duck, not dry at all. Finished in a flash. 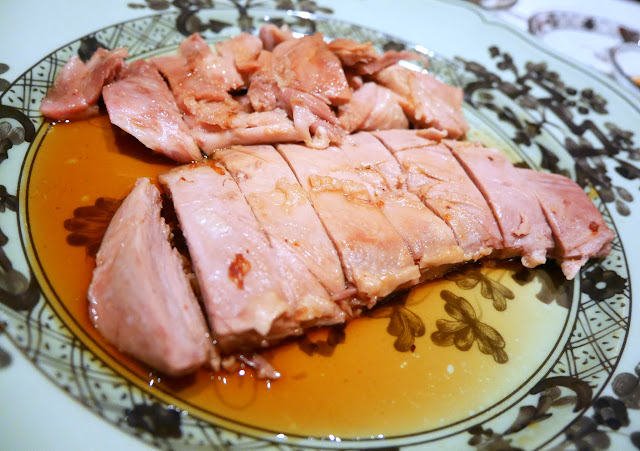 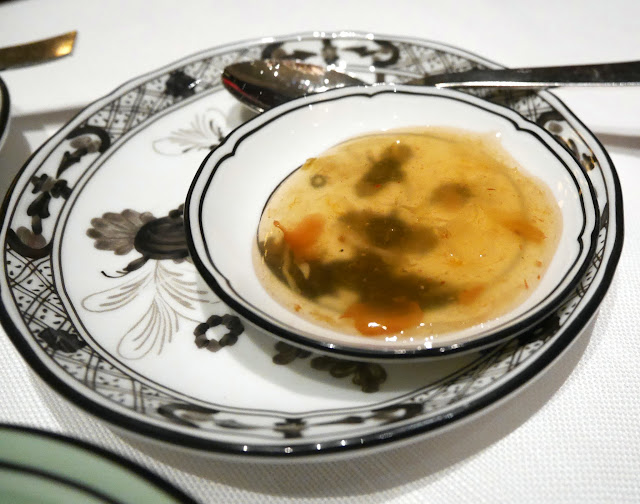 Since the Claypot with Stewed Pork was not available, we ordered the Chinese dish we all grew up on – Sweet Sour Pork. This was superlative. Do have a careful look at the photo. You will notice there is no sauce. The sauce that is there is only to coat the fried Pork and Vegetables. You will also notice that there are no pieces of onion, just some of the light green parts of a Scallion tossed in the sauce. A few Capsicum and a few bits of Pineapple. Most of what is on the plate is small pieces of batter coated, crunchy fried Pork. This did taste like what we get in Chinese restaurants however the balance of ingredients and saucing is quite unlike what we are used to back home. 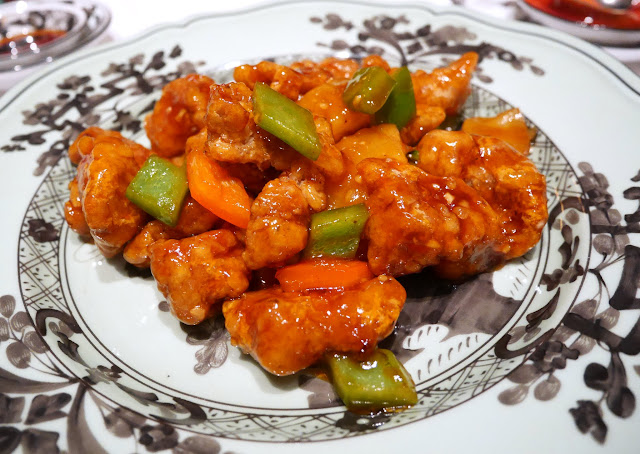 Next up came another top quality dish Sautéed Black Fungus, Mushroom, Asparagus, Deep-fried Bean curd. This, as you can see from the photograph was dry. In my view, being served course by course in as much as each dish at a time was indeed working favourably for the food. After the Sweet Sour Pork, here was a gentle and mild dish. Savoury Beancurd, matched with the delightful mushrooms and fresh tasting Asparagus was a dish to be enjoyed by itself. Eating this with a strongly flavoured dish would simple overpower this. You needed a clean plate to appreciate the subtle flavours on this plate. 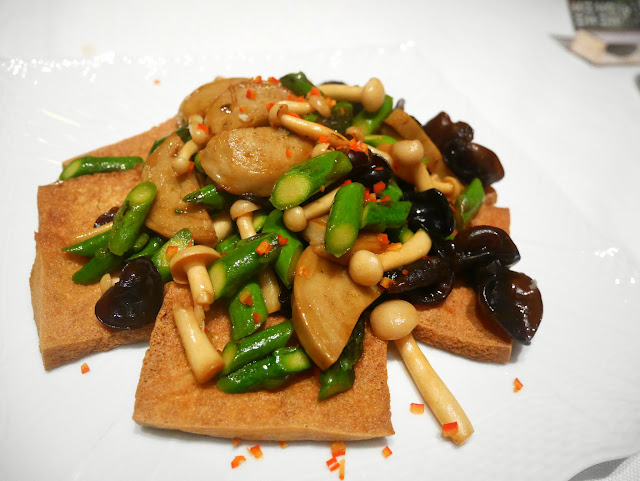 To conclude the meal was the star dish of the evening. The simple description – Poached Rice with Lobster – belied its beauty and complexity. In the centre was Rice poached in Lobster Broth. Around the rice was some Spring Onion and more rice, except that this was crisp rice. Crowning the rice was some expertly cooked Lobster. After the plate was set down, a double cooked Lobster Broth was poured. The aroma’s wafting were tantalising. At first you sipped the broth with the crisp rice. Then, like a sandcastle on the beach, the rice in the centre started to cave into the broth adding another texture. You then could break off chunks of the poached lobster. This was really really good. Easily the second best dish I had eaten on this trip after the Honey Peas Shrimps and Truffle Truffle at Imperial Treasures Shanghai Cuisine. 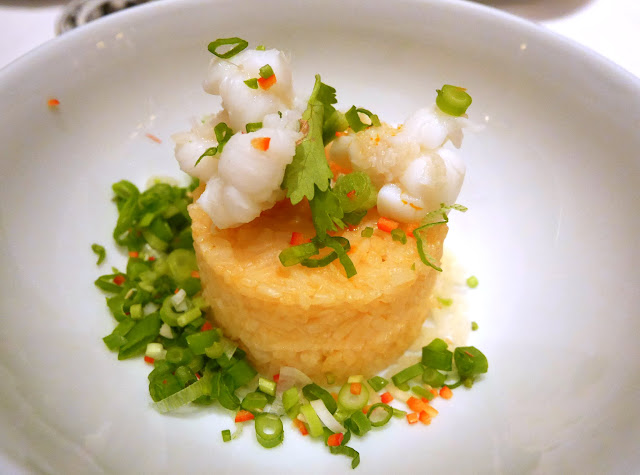 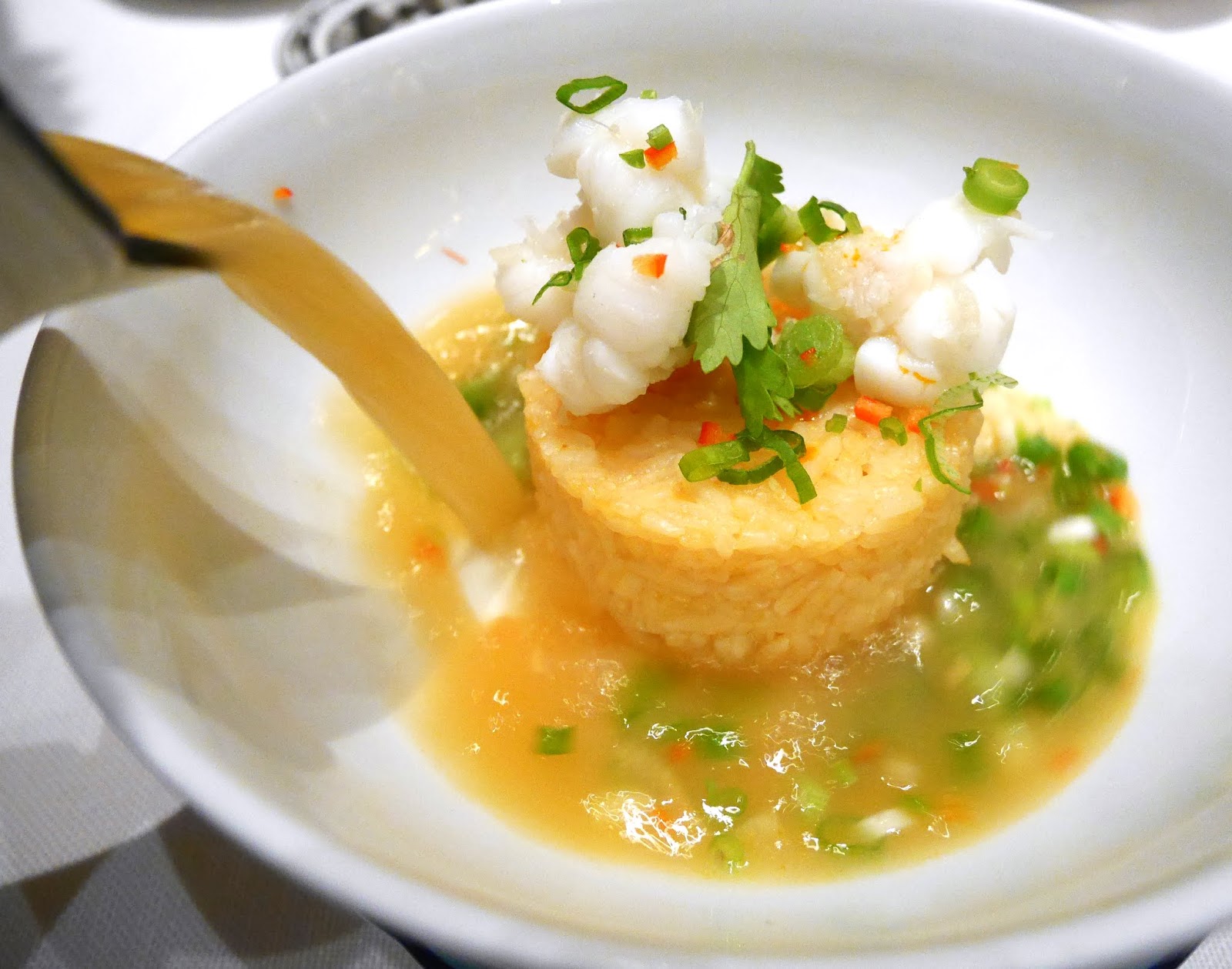 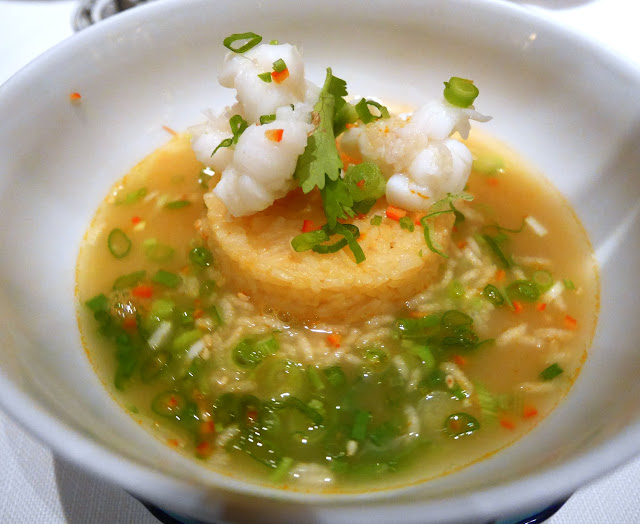 Once again, I felt that in retrospect, getting the food course by course was hugely beneficial. Each dish could be enjoyed in exclusion. I cannot imagine how one would have eaten the Poached Rice and Lobster if it was served with all the other food. If this was an example of Contemporary Cantonese, then I like it. The Razor Clams with Enoki Mushroom, the Sautéed Black Fungus, Mushroom, Asparagus, Deep-fried Bean curd and the Poached Rice and Lobster were dishes that I have never eaten. All three were of high quality.

A word about the service. Schizophrenic. We had moments of smooth service where glasses were topped up and the Peking Duchy expertly portioned. We had moments of insanity when food from another table was brought to us. We had moments of utter confusion and incomprehension when we simply could not follow what they were saying. This was most apparent when we were asked how we wanted our Duck meat. Probably caused by us being unaccustomed to local custom coupled with different accents. However, all was done with a smile on their faces and an overuse of the word “certainly”. “May I have another Asahi please?”  “Certainly.” “May I have a fork and spoon for my meal and not chopsticks?” “Certainly.” And so on and so forth.

If in Singapore and you had two meals should this be one of them? Certainly.

Posted by Stonethrowers Rants at 4:04 PM