Dinner two in Dublin. After the huge disappointment at Exchequer we were hoping for good things at The Pig's Ear. This is another of Dublin’s more highly rated restaurants. It has a nice location, overlooking Trinity College grounds. We popped in during our afternoon explorations of Dublin and made a reservation for the evening. The dining room looked nice and things looked promising.

As always, before dinner we had to soak in some of Dublin’s finest, there is a pub very close to our hotel called Nearys where we popped in. A pint of Guinness for me and a pint of Bulmers Cider for HRH the Queen of Kutch. The atmosphere was relaxing and gentle. The drink was had in the most pleasant of circumstances. Then it was a short walk to The Pigs Ear. 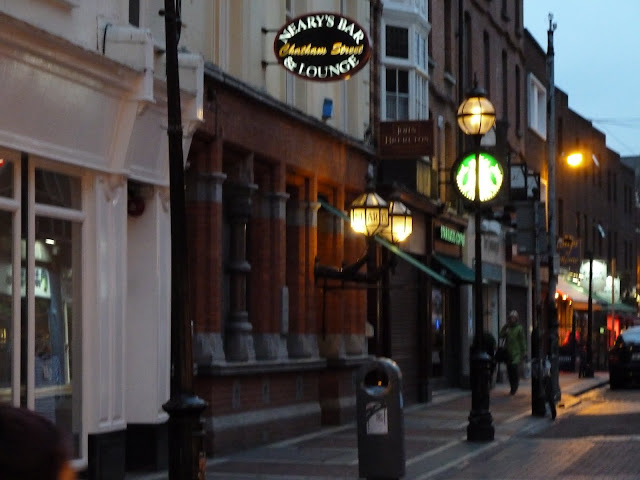 Dublin has a smallish City Centre, pleasant weather and decent footpaths. The result of this is that walking is the best way to get around. The furthest sightseeing is a 45 minute walk being the Guinness Storehouse and even that 45 minute walk is very pleasant. Our Hotel is also brilliantly located so getting around on foot is a dream. All this of course is dependent on the weather. Till the day before we arrived, Dublin had heavy rain and blustery winds. This paragraph would have read differently if that had continued.

The Pigs Ear is located in a very narrow pencil shaped building. Level 1 is the main restaurant, level 2 houses the Kitchen, level 3 has a more exclusive Chefs Table and level 4 has the toilets. We were on level 1. This room had about 50 diners and just 3 front of house staff tending to them. So typically European! This kind of staff guest ratio would have any Indian restaurant in Mumbai cart wheeling to disaster, just the demands for sliced onion, masala papad, garam roti and limbu would finish off the staff. If it was a Italian restaurant in Mumbai the demands for fresh lime soda – one sweet, one salty, one sweet salty mix, each with different quantities of Ice – chilli flakes, tomato sauce and mustard coupled with the demands of an undisciplined child who is never told to channel his orders thru his parent, would knock the socks of a restaurant. In addition to all this nonsense you then require the waiter to serve you your food in a plate, it’s all too strenuous for us Indians to serve ourselves, or is it a sense of power or wanting more for your money? The only thing we draw the line at is asking the waiter to eat your food. But in Europe it’s different. No sauces, no extras, nothing. What is on your plate is what you eat and salt and pepper are on your table.

We were welcomed, our coats taken and soon seated. Another pint of Guinness for me and a Cider for Her Highness. We got a bit of bread. The Rye Bread with Pumpkin Seeds was excellent.

To start HRH the Queen of Kutch ordered Baked St. Tolas Goats Cheese with Basil, Toasted Seeds & Nuts, Rye & fennel Crisps. This was beautifully served on a wooden board. She pronounced it as very good.  I had a spoonful of this and I must say she was absolutely correct. It was really good. There is one thing I just cannot eat, and that is Goat & Ewe milk cheese, I cannot stand the barnyard flavour, but this was very mild. The addition of honey made a winning combination and the crunch of the nuts was welcome. The Curds had been flashed under a Salamander and got a lovely browned top. A very good starter indeed. 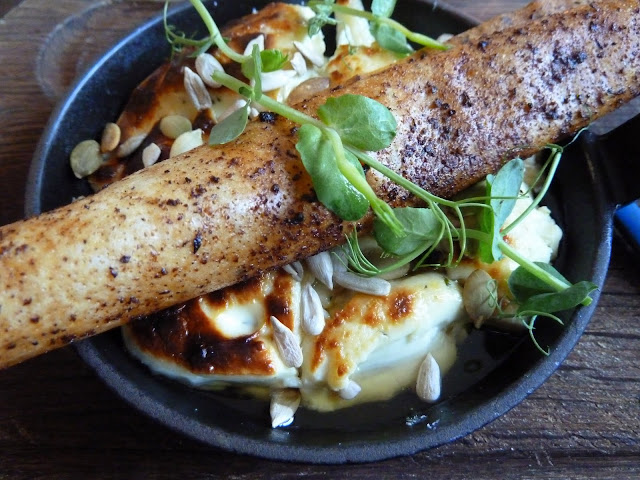 I ordered Whiskey & Citrus Cured Irish Salmon with Pickled Cauliflower, Soda Bread & Dillisk. Dillisk is Dill or `Sua’ in Hindi. What a beautiful plateful of food. So summery so colourful so well presented. It felt a shame to eat it. Some wafer thin slices of Apple. Radish and Cucumber, some Tapioca pearls [`Sabudana’ to us] a smear of Cream Cheese on the bottom and a lovely Pink Salmon nestling inside. The brown crumbs are the toasted Soda Bread. This was a really nice dish. Is it not really pretty even in the photograph?

Her Highness wanted the Shepherd’s Pie, which was a speciality at The Pigs Ear described in the Menu as the `Pigs Ear’ Lough Erne Fed Lamb Shepherd’s Pie. A Shepherd’s Pie is classic comfort food made everywhere. A mince which is a blank canvas to be flavoured with any spice topped with lovely mashed potato and served hot. We have our versions of Shepherd’s Pie in India, a Kheema with Peas and some Potato; all of us remember our mothers making it. Soon it arrived, in a oval dish with fluffy mashed potato deliciously browned. This was cut open to release clouds of aromatic steam. The mince was really really hot and after it had cooled the first mouthful resulted in mild pleasure for Her Highness. Tasty, well seasoned and rich in taste. Only one minor problem – too much, just too much mashed Potato. Yes, I know Ireland loves its potato, it had a potato famine which killed thousands of Irish but this much potato? The ratio was probably 1/3 lamb mince and 2/3 potato mash. A bit too much don’t you think? Another example of short-changing if you ask me. At a price of 19 Euro this should not have been done. I realise that protein costs more than potato but this was shocking. Have a look at the volume of potato that was removed from the top after leaving what we thought was an appropriate amount of potato to complement the mince.

For my mains I had Honey Roasted Fermanagh Pork Belly with Lakeshore Mustard Mash, Braised Lentils & Apple Sauce. Getting the skin on pork belly crisp is not such a complex thing. Every Chinese Restaurant [outside India] does this. I do this at home, have a look at my home made Siu Youk Pork. Even in the Continental style it is not difficult. You need to place the piece of belly skin side down on a pan to crisp up the skin to make Crackling. I got limp Crackling which is difficult to eat. It’s like eating a soggy papad; you know how it sticks in your teeth. Decent tasting but simply careless. The menu said I would get this with braised Lentils. I got none. Instead I got some Black Pudding which I like and have no problem with. Why then mis - describe things on the menu. Why does a restaurant simply not care what they are putting out? This was not short changing this was simply sloppy. 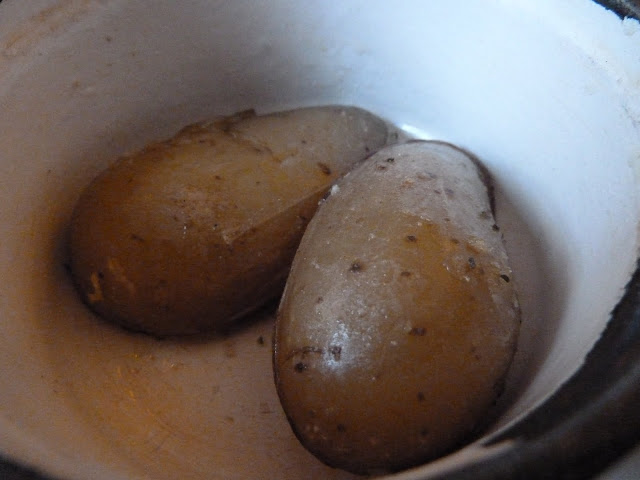 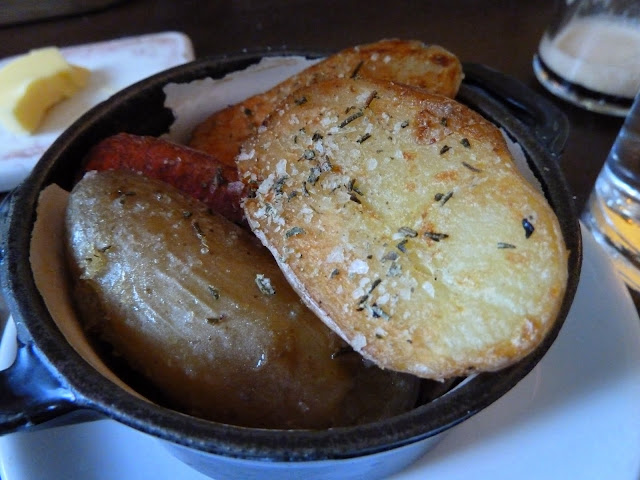 So after a wonderful high we once again had a disappointing end to the meal. We were in no mood to handle dessert. We put our tail between our legs, paid the bill and walked out into the very cool night air. A stop at the nearby Italian Ice Cream Parlour and a small cup of Ice Cream, very good I may add, lifted our spirits.

Food till now has been disappointing. Much like food we get in restaurants in Mumbai, short-changing and careless. In Mumbai our demands and standards as punters are virtually zero on things that count i.e. food. It seems like the same here in Dublin. To avoid any further disappointment we plan to have our last dinner in Dublin at a pub. Low price low expectation, hopefully high delivery. All will be revealed in good time.

Posted by Stonethrowers Rants at 9:53 PM