Last night, at dinner, we had an absolutely startlingly great meal.

Since, as I have told you in the previous post, this is effectively our first visit to Manhattan when we are senior travellers, we had decided to do all the touristy things that you do when you are 25 years old. So whether it is eating a Hot Dog at Nathans, or a Cheesecake at Juniors or going to the 9/11 Memorial, we had to do it all.

One thing that we really wanted to do was have a proper steak at the legendary Peter Lugers in Brooklyn. Getting a table here is very difficult. They do everything manually, no email or internet bookings. You have to call them 5 weeks in advance. HRH The Queen of Kutch sister helped in this, as she lives in the US and with all the time differences and my hugely complicated name, it was best she did this. We had a reservation at 7.45 pm. A decent time. 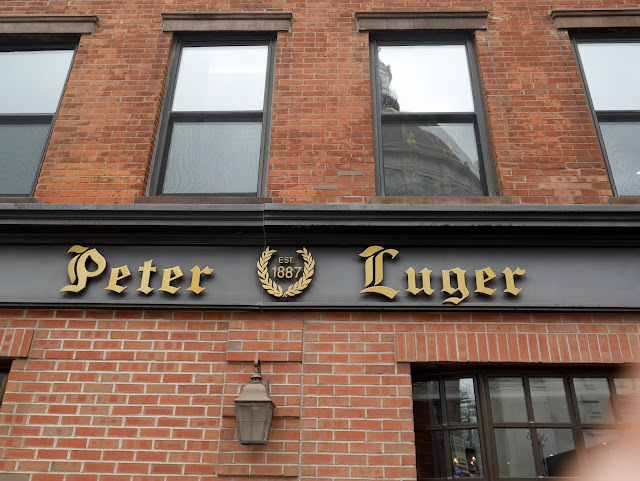 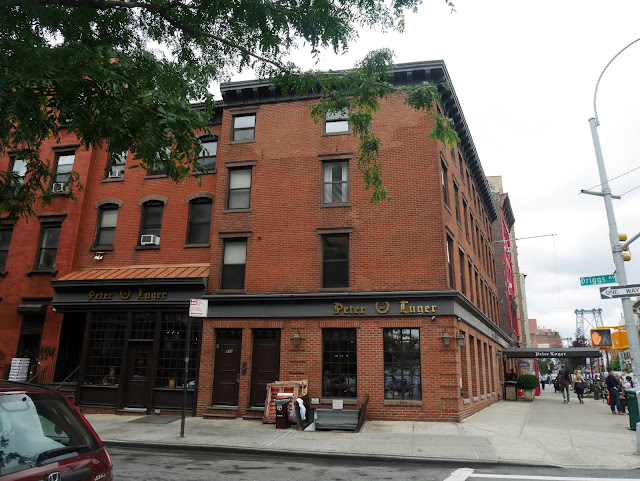 By the way, I am not going to make any jokes or comments or voice opinions on cow eating and Bharat Mata Ki Jai, Gai Mata, Gau Mutra and all that.

A bit of background. Peter Luger was established some 130 years ago. Several years later the original owners sold the place to the Foreman family, who have run it ever since. Every documentary that you see on great steakhouses or New York’s legendary restaurants you will find Peter Luger in it. The restaurant is located in Brooklyn which is a 40 -50 USD taxi ride [depending on traffic] or a 24 minute subway ride from Midtown Manhattan. The walk from the Marcy Avenue Station to Peter Luger is short, though passing thru some rather decrepit areas.

The restaurant has bare wooden floors and bare wooden tables. No tablecloths. Heavy oven proof crockery, a short very meat centric menu, a meager wine list, poor quality glasses, allegedly surly, unhelpful and impatient waiters, a general reluctance to change or adapt or customize menu items, reservations only by phone, a strict cash only policy –though there is an ATM in the premises - and an awkward location.

In short, the anachronistic antediluvian restaurant should be dead by now.

As is our wont, we reached a few minutes early. You enter thru the bar, which was absolutely heaving, you could barely enter, but I got my elbows out reached the manager and gave the manager our name. He asked us to wait a few minutes. The place was full. I asked the manager how many covers they did in a day. He said between 500-550 a day!!! That my friends would be about 350 to 500 kgs of beef [with bone] being served every day. Soon we got our table.

We were in a classic steak house. Steak is man food, the food of prosperity, the food you eat when you have arrived. It is the food of the rich. It is the food to impress your guest, and it is the food we all aspire to eat. When you eat steak you forget all about the problems, the nagging wife, the whining children, the EMI’s and the bastards who are your bosses and colleagues. You simply have a good meal. And what cocktail do you drink when having a steak? Obviously, a Vodka Martini, straight up with Olives. Shaken, rather vigorously with a lot of ice. We are influenced by James Bond. This came, icy, with the bite of nearly neat vodka, diluted only by the ice in which it was shaken. Dinner was ordered, a slice of the thick cut Canadian Bacon as a starter, Porterhouse Steak for two, French Fries and Spinach. To drink, a bottle of the Peter Luger house wine. 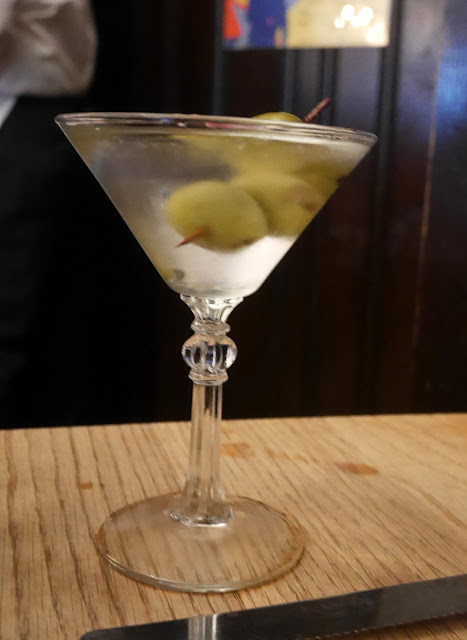 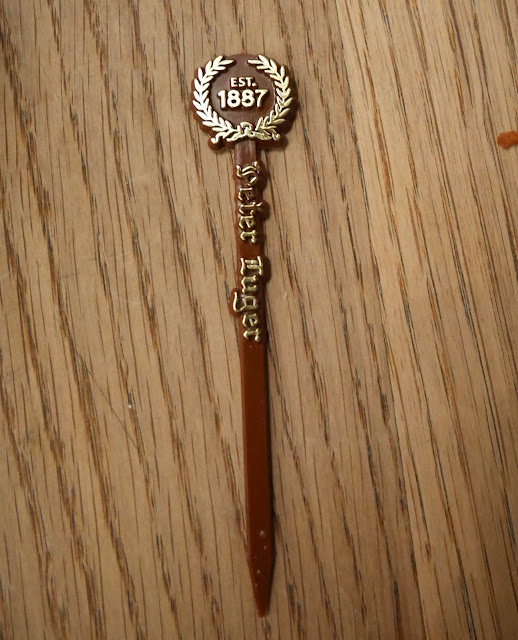 The restaurant was absolutely full. The atmosphere was jovial. Everybody was smiling and talking. The punters were mixed. Many tourists out on a pilgrimage like us, many local tourists and many locals. I must make a point at this stage. Peter Luger has been awarded 1 star by Michelin. It is an expensive place to eat at. The problem with Yanks is that they manage to ruin the atmosphere [according to me] in most fine dining restaurants with their obsession with casual dressing. Large 250 pound men aged 65 wearing shorts in restaurants for dinner is not my idea of dress. Just like in India especially in Mumbai, with the Jains and vegetarians fucking up restaurants with their peculiar requests and dumbing down the entire menu, here in the USA you have the Yanks screwing a restaurants atmosphere with their clothes. 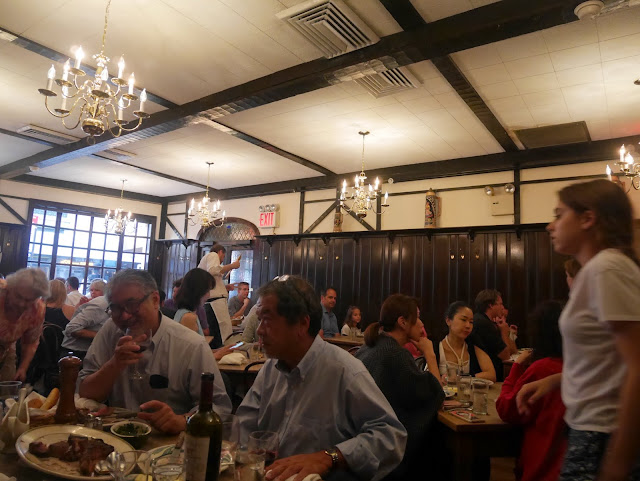 The Bacon arrived. And here start the superlatives. It was quite simply the best bacon we have ever eaten. We have eaten a lot of bacon. This beats everything. The bacon was thick cut and simply grilled in the ferocious grills they have. This was crisp on the outside and moist on the inside. The thickness of the slice was what made all the difference. Well begun indeed. 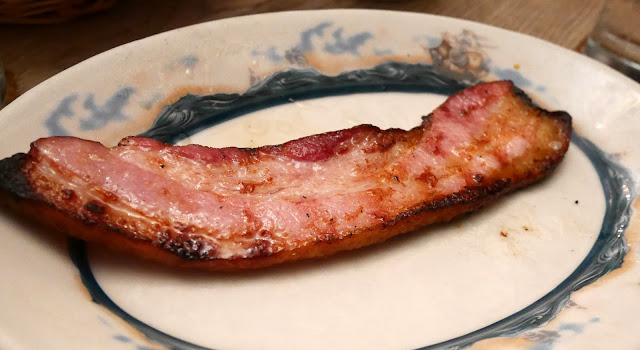 The plates were cleared and a small plate was placed upside down on the table. This was to be the “jack” to prop up the plate with the Porterhouse. A porterhouse is a cut of beef which is also referred to, incorrectly, as a T Bone. I am not getting technical here, so let us use the terms Porterhouse and T Bone interchangeably. The beauty of this cut is that the length of the “T” separates two muscles which work very differently on the animal. So, you effectively get two different steaks – the far more tender Tenderloin [the smaller steak] and the larger Strip Loin or Strip Steak which is more flavorful as the muscle is worked harder. The Porterhouse is first cooked on a grill and then placed in the oven. It is simply seasoned with only salt and pepper and finished with a ladleful of Clarified Butter. The Steak is cut in the kitchen, released from the bone and brought out, sizzling.  The waiter served us each a slice of the Tenderloin and the Strip. Once this was done, I could take the photograph. This is why the plate looks a little decimated. 4 pieces have already been removed. As the plate cools the juices and the butter all happily combine. I spent quite some time during mouthfuls, basting the steak with the pooling juices and butter. 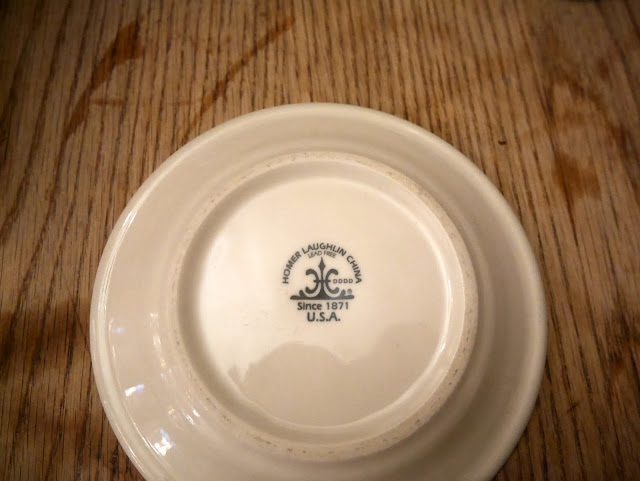 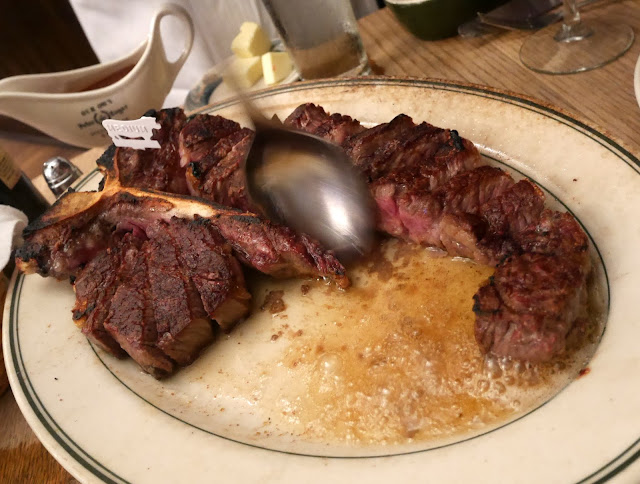 My God, what a steak, this was without a doubt the best steak we had ever eaten. Mind you we have eaten a lot of expensive meat in Japan, UK and Europe. The Japanese meats are undoubtedly good but there is one fundamental difference, which is, that the Japanese meats are generally cut thin. Here you had a thick piece of beef. It was seasoned beautifully and personified the phrase “melt in the mouth.” This was nirvana, we were both is various stages of ecstasy. If that was not enough the French Fries were a thing of beauty in themselves. Very hot, very crisp outside, a delightful golden brown and souffléd inside. Thankfully, to keep some balance while we were in stages of delirium with the sheer pleasure of this meal, the spinach was more ordinary, but equally good. This is why Peter Luger served 500 people a day. 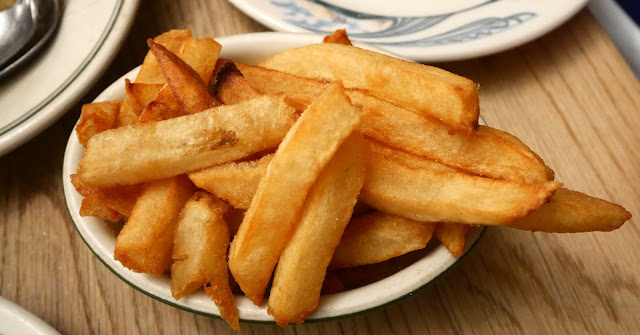 Let me now give you some perspective on how this meat reaches the table. Peter Luger buys only U.S.D.A. prime beef. The beef is dry aged in Peter Lugers own lockers and then butchered and trimmed by Peter Lugers staff on its premises prior to cooking. Peter Lugers purchases over ten tons of beef per week to supply its Peter Luger steakhouse restaurants. All meat purchased by Peter Lugers is personally selected and approved by members of the Forman family. Prime is a classification of beef provided by the United States Department of Agriculture. There are various grades – Prime, Choice, Select, Certified Tender, Very Tender, Standard, Commercial, Utility, Cutter & Canner. Only about 2% of all beef is graded Prime. So, this expensive product is dry aged by which there is further moisture and consequently weight loss. Then this is trimmed leading to further loss. The trimmings are used by Peter Lugers to make hamburgers which are served at lunch. So, ultimately you get a refined product which becomes more expensive as a result of the losses. 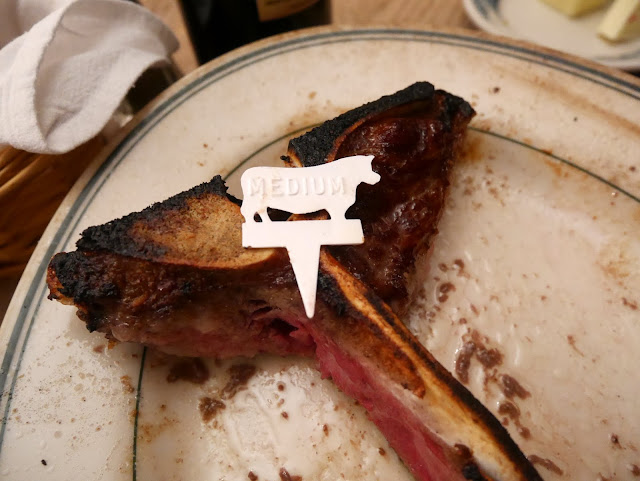 We finished the steak and all the fixings. Then HRH The Queen of Kutch asked our waiter which was the most decadent dessert, to which the answer was the Cheesecake. From what I have read the cheesecake is a bought out component from a top cheesecake seller. No worries. It was excellent. Not sweet, creamy and not collapsed in the center.

We ordered an Uber and asked for the bill. When walking out HRH The Queen of Kutch thanked the Manager.

The meal was fantastic. To have a meal and say this is the best bacon, the best steak and the best French fries I have eaten, in one meal is a lot. This was truly memorable. I cannot use the word epiphany, but you get my drift. This was exceptional.

The Uber was driven by Junaid from Pakistan. In the ride we expressed great bonhomie, denounced the politicians in both countries and solved the Kashmir problem.

What a wonderful end to a superlative evening. The best steak and a solution to the Indo Pak problems. What more could one want.

Posted by Stonethrowers Rants at 7:48 AM