This is my story about the delicious Hamburger as I have grown to appreciate it in the UK.

I do not start a post with a caveat or disclaimer. This post is unusual as it has not one, but, three disclaimers, caveats, explanations, or if you are cynical, excuses.

First, a similar sort of article was written by Vir Sanghvi in `Brunch’ a supplement with the Hindustan Times on Sundays. I have not been `inspired’ by that article. This post has been fomenting for some time now and because of a change in my work - life equilibrium, I was unable to write this earlier.

Second, the Hamburger is an American creation, symbol and institution. I have not been to America since shortly after the infamous 9/11 which happened in 2001, some 12 years ago. So my writings are based on my experiments with British Hamburgers.

Third, in India, despite the presence of McDonalds, our Hamburgers do not have a beef patty. It is either chicken, if you are lucky, or mashed vegetables. Indians by and large do have a problem with eating bovines. It is just a few restaurants that serve a beef patty. Why is this important? The reason is simple. One of the joys of eating a Hamburger is the fabulously juicy patty. The meat juices that are not absorbed by the bun as you bite into the Hamburger, soon drip onto your plate or your shirt and often run down your hands. If you have a vegetable patty forget about any juices. If it is a chicken patty, it has to be cooked thru or else you will have a case of severe food poisoning. Chicken cannot be eaten raw. Thus, an essential component of a Hamburger eating experience is simply lost.

Having got that out of the way, let us plunge on.

Josh Ozersky, in his fascinating book `The Hamburger’ claims that the origins of the modern Hamburger can be traced to a cook named Walter Anderson. Anderson is credited to having been the first person to cook the patty at a high heat on a dedicated grill ensuring that the patty was browned on the outside but remained raw and juicy in the centre. When cooking the patty, he flattened it with his spatula and by keeping the patty as flat as possible giving you a greater surface area. He replaced square sliced bread which was then the norm, with a round bun of the same size as the patty, which he split horizontally. Another innovation was grilling sliced onions alongside the patty so the juices of the cooking patty would mingle with the onions. Anderson took on a partner Edgar Waldo `Billy’ Ingram and soon White Castle was established. This became the template for quick service restaurants [QSR]. From this start you had more and more refinements till the establishment of MacDonald’s and the like.

Today Hamburgers are everywhere, however, their defining characteristic of a circular beef patty in a horizontally split circular white bun is unchanged. You know exactly what a Hamburger is when you order one, you know what it will look like and generally know what it will taste like.

In London, Hamburgers are the rage, they are absolutely hot and on top of everyone’s mind. So much so that highly regarded American Hamburger specialists are opening outposts in London to serve burgers to the Londoner. I like to classify the Hamburger into four broad categories. The lowest end of the scale is the burger sold by the QSR chain, the MacDonald’s and Burger Kings of the world.

The next two rungs of burger sellers is where all the action is. This space is occupied by what are known as `posh burgers’. There are several players in this area. Honest Burgers, Byrons, Black & Blue, Gourmet Burger Kitchen were the older ones. Then came the aptly named Burger & Lobster with it’s startling offer of serving only a very expensive burger at GBP 20, or, a reasonably priced half lobster on a bun or just grilled at GBP 20.These burgers are also what I call `clean’ burgers’. By this I mean that the contents – patty, tomato, onion, lettuce and condiments – are clearly discernible and visible. The patty is cooked medium rare by default, unless you would like it cooked differently.

The third category is what is now being referred to as the ‘dirty burger’. Meat Liquor and Patty & Bun are two newer kids on the block who serve ‘dirty burgers’. Dirty Burger and Tommis Burgers are two others in this category. Though all these are `posh burgers’ they are not `clean burgers’ but `dirty burgers’. You have a patty which is slathered with sauces and condiments. The different ingredients are not defined clearly; the burgers are served on a tray and are juicy in the extreme. 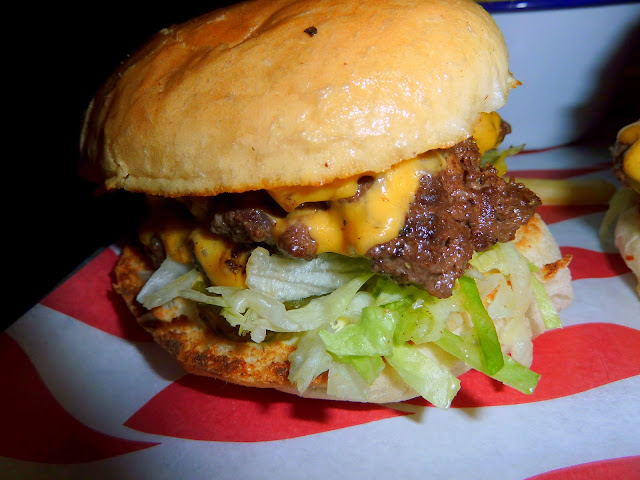 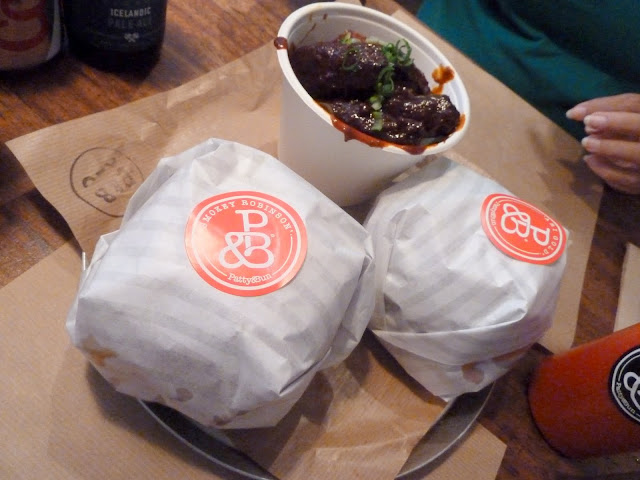 As if this was not enough, the posh American guys have opened. Danny Meyer’s legendary Shake Shack from Madison Square Park opened to snaking lines at Covent Garden in London. Not to be left behind, Five Guys a posh burger restaurant established in Washington DC also opened in London, also to serpentine queues.

Hamburgers being all pervasive, also managed to exert and influence on two highly regarded French Chefs. This has resulted in the forth category of a French burger. Daniel Boulud a Frenchman transplanted to New York Frenchiefied the Hamburger. His burger is made with Sirloin, Braised Beef Short Ribs and has a slice of Foie Gras and Black Truffle. All this is in a Parmesan Bun. Boulud, naturally, has a restaurant serving this very posh burger in the Mandarin Oriental Hotel at Knightsbridge in London. Not to be outdone, Joel Robuchon, who holds 28 Michelin Stars, more than any other Chef alive, serves `Le Burger’ a beef and Foie Gras burger with Bell Peppers, which is stunning. Just typing this makes me hungry.

The best burger I have had in India has been at the Taj Lands End bar.I had written about them in an old post. I quote what I had then written - "The Burger was actually a trio of mini burgers in a long white platter. Very clever, pleasing presentation, and, so sensible. It can be quite difficult to eat a full sized burger and quite messy too, so, by giving you three smaller burgers it made things so much simpler. Full marks to the Chef who devised this at the Lands End. The Burger itself was really good. There was no raw onion; instead, there was some beautiful caramelised onion marmalade. The French Fries that came with the Burger were fresh, hot, well seasoned and delightfully crunchy."

I do not know if they still serve them. If they do, they are good.

After typing all this, I did wonder how I should end. I really do not know. I do like Hamburgers and the posh ones are really nice. The only positive conclusion I can make is that do not make such a big deal of how bad Hamburgers are, that they make you fat and unhealthy. Do, on occasion, especially if you are in London, eat a `posh burger’. You will not regret that decision.

Posted by Stonethrowers Rants at 7:49 PM