Dinner was to be at the 4-month-old much flaunted, over-the-top city extravaganza - Bob Bob Cite. We had read some good reviews and knowing the Chef was the brilliant Eric Chavot, we did not hesitate to make a reservation way in advance. A bit of a back story, no two back stories…

1)  We have eaten several outstanding meals at the Chef’s eponymous restaurant Brasserie Chavot at the Capital Hotel in Mayfair and were devastated when he decided to shut the restaurant in the end of 2015. In his announcement he said he would announce his new site shortly and Mr Stonethrower and I have been eagerly waiting for Chef Chavot to re-emerge. His Deep fried Soft Shelled Crab with Saffron Aioli was the stuff dreams were made off. Then finally, it was announced that he would be helming Bob Bob Cite, the sister restaurant of the glamourous Bob Bob Ricard in Soho. If you haven’t already, read about Brasserie Chavot here.

2) Bob Bob Ricard is the uber luxury iconic Soho restaurant that has epitomised indulgence and excess ever since it opened its doors a decade ago. The seemingly bizarre décor inspired by the Orient Express and the and ‘Press for Champagne” button at each table ensured it was “The Place” for the most outlandish indulgent celebrations. 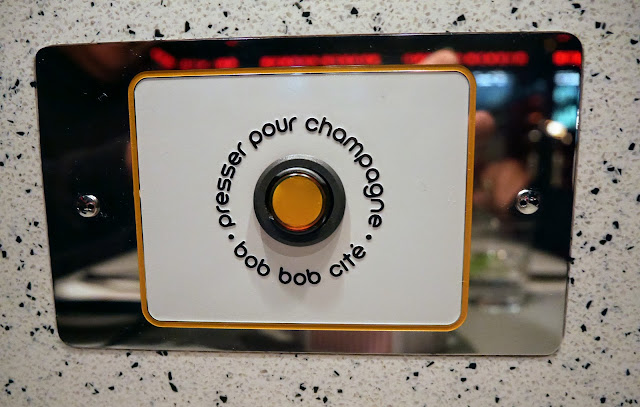 Above: Press for Champagne. I wish I had a switch like this at home.

So back to Bob Bob Cite. It is housed in the financial district of the City of London in the new wedge-shaped glass clad Leadenhall Building which has been nicknamed the Cheesegrater - a name originally given to it by the City of London Corporation's chief planning officer, Peter Rees, who upon seeing a model of the concept said, he could imagine his wife using it to grate Parmesan. [The name] stuck.

The wowing of Bob Bob Cite begins ever before you enter the restaurant when you enter the atrium of the Cheesegrater and tilt your head up to when seems like an oblong UFO suspended in mid-air with a flickering LED ticker tape running along the top. The ticker lists the dishes served. We had been on a walk in the City to see the brilliant buildings up close. You can read about that here.

A dedicated elevator whisks you up the 30 odd feet and duly alerted front of house are ready to welcome you into a glittering Orient Express inspired Shangri La. Lights glitter and flash. Every surface shines. Corridors seems endless. A bluish light guides you through to two large dining rooms with old fashioned booth only seating. The booths are plush leather in deep blue and scarlet red. Each booth comes with a “Press for Champagne” button and considering we are in the financial district where being always connected is critical, a charging point and a USB port. The red and blue ticker, a nod to the stock market flickers around the restaurant and I believe corresponds to the table numbers.

A bit more about the décor before I get to the food. Owner Leonid Shutov has spared no expense to make this the most extravagant restaurant in the City. This includes 25 bespoke chandeliers, endless corridors of mirror polished steel trim and a staggering 80000 hand-polished wall panelling bolts! 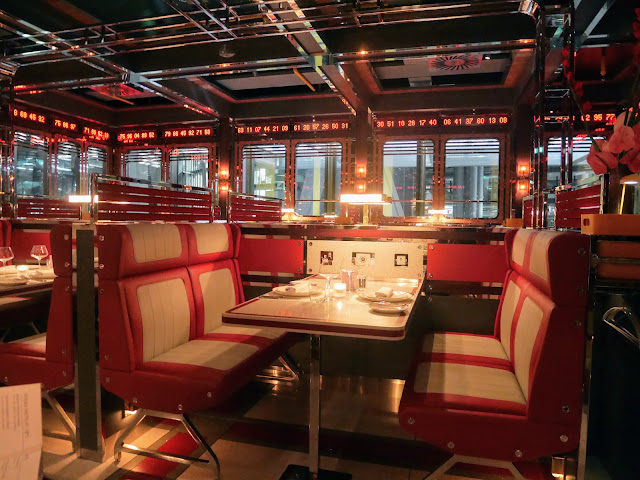 Guests are invited to start with shots of ice cold Russian Standard vodka before the brilliance of Eric Chavot is unleashed on them. 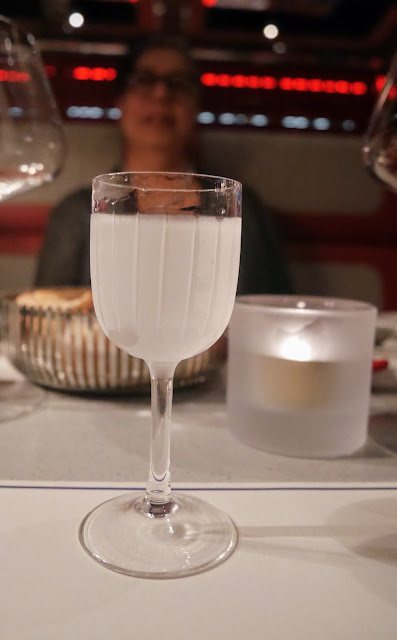 The menu is classic French with Russian influences. Bizarre? Not really. It worked perfectly and everything we ate was on point. As a matter of fact, it’s a menu where so many dishes called out to me that I know I will go back to try them. So, while Bob Bob Cite dazzles the eye, it is also very, very good on the palate. Something not many other restaurants can claim.

After a shot of some excellent cold Vodka with good bread and butter, we were ready for dinner.

After ordering a bottle of Cotes Du Rhone Blanc by Michel Chapoutier we were ready for dinner. Mr Stonethrower had to have the French Onion soup, a long-time favourite of his and he was not disappointed. After staring longingly at the description of the Escargot in garlic and parsley which is a dish I always eat wherever I am, I opted for the Duck Egg with Gruyere and Salt Beef Hash. 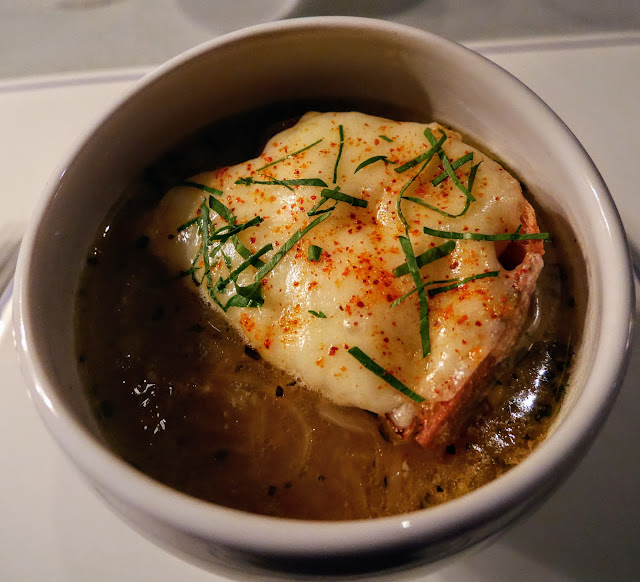 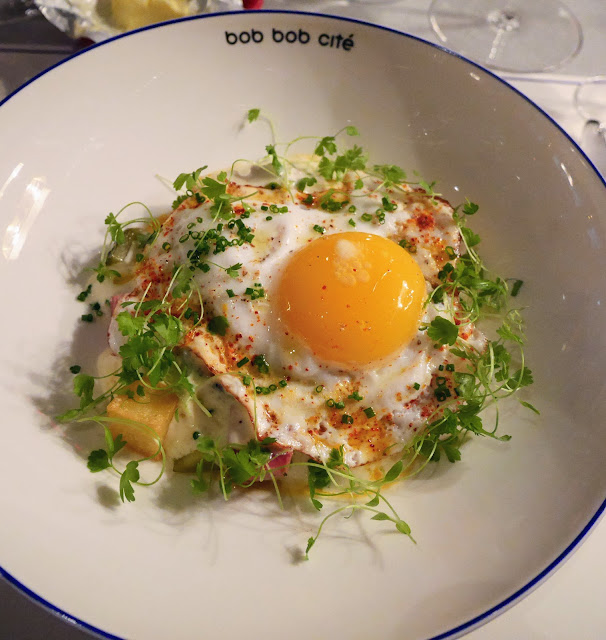 Mains for Mr Stonethrower was a dish he had learned at Cordon Bleu way back in 2006 and has always enjoyed. As classic French as classic French can get – Veal Blanquette - in which neither the veal nor the butter is browned in the cooking process. To refrain from browning meat and fat in this way, is to cook them “en blanquette”. From Larousse Gastronomique "BLANQUETTE: the French term for a ragout of white meat (veal, lamb or poultry) cooked in a white stock or water with aromatic flavorings. 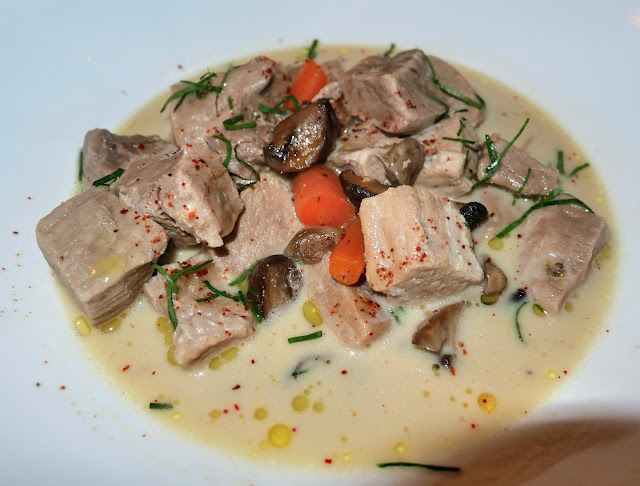 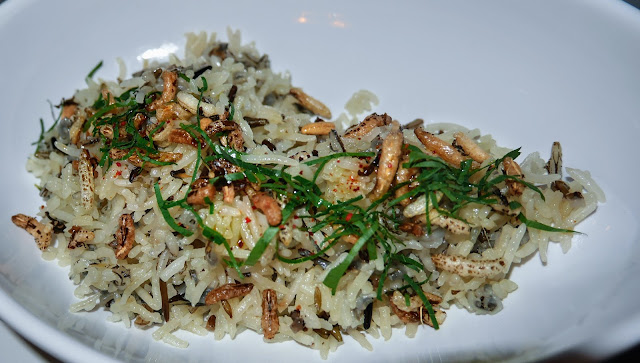 Above: Pilaf to classically accompany the Veal

I had the Chargrilled Sea Bream with Olive Oil, Lemon and cherry tomatoes and was immediately transported to our days in Cannes! The crispy charred blistery skin was absolutely sensational. The taste of South of France, Provence on a plate. 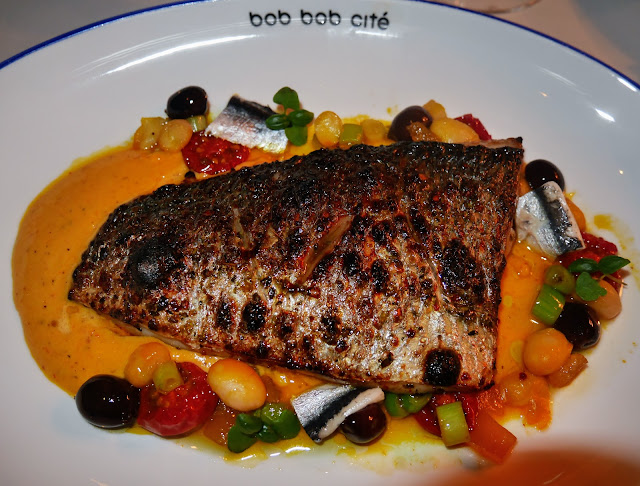 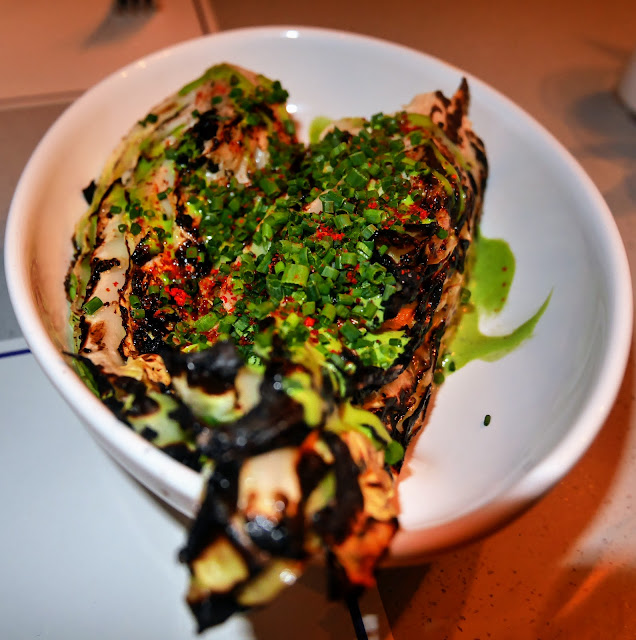 Above: A side of Grilled Hispi Cabbage with Green Goddess Sauce

Dessert was an outstanding Ile Flotante and a not so nice Chocolate Crème with Pistachio and Ice Cream. But that did not in anyway dampen our wholehearted approval of the restaurant. One dud dish was nothing in the face of gob smacking luxury and masterful food. Deeply flavoured, well seasoned and served hot. 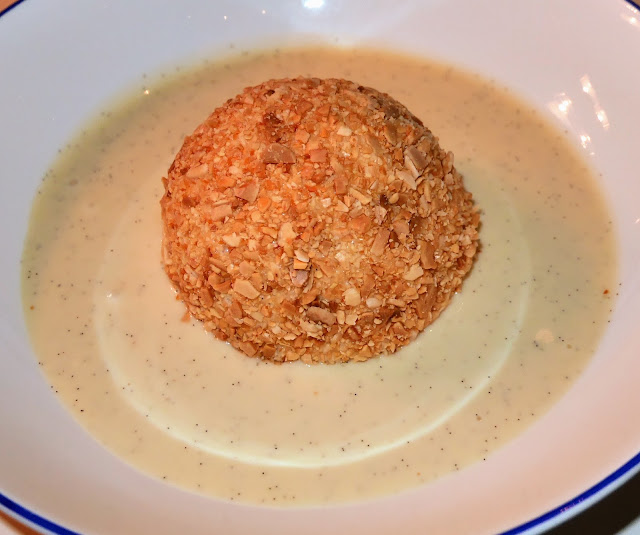 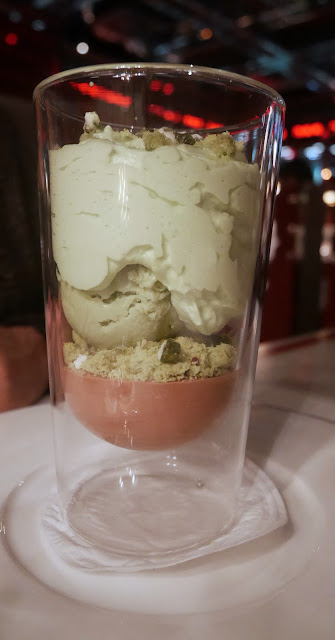 We will definitely go again. You should go too.


Posted by Stonethrowers Rants at 11:05 PM