Restaurant Gordon Ramsay is the flagship of Chef Ramsay's empire. It has 3 Michelin stars and is one of the 4 in UK to have this honour. The other three being Fat Duck by Heston Blumenthal at Bray, Waterside Inn by Alain Roux also at Bray and Alain Ducasse in London.

Ramsay, the l’enfant terrible among Chefs [well, he is still only 45] is now probably better known for his aggressive posturing and strong language on television shows, but let us not forget that he is an extremely talented, capable and intelligent Chef who has been schooled by some of the present greats. He has worked with Albert Roux, Guy Savoy, Marco Pierre White and Pierre Koffman. His style is more modern and European influenced than that of his previous employers, while retaining its French base. People often view Ramsay’s foul temper and shouting on his TV shows as unfair or harsh and in some instances as drama. I for one believed that he was always justified. I mean you are running a restaurant with paying customers and you have to have high and consistent standards. After eating at his restaurant, I have greater respect for his demand for standards as well as his capabilities.


The restaurant is in Chelsea, a nice part of London but away from the usual Mayfair/Park Lane/Soho locations of fancy restaurants. It’s small with only 45 covers and the room is quite simple and stark. Exquisite fresh white roses are dominant as far as decor goes, and the room is also predominantly white.

Before I delve into the food, let me tell you a bit about the service and ambience. The dress code is “smart. Jackets and shirts are preferred for gentlemen, but ties are not required. We would ask our guests not to wear jeans, trainers, T-Shirts or any form of sportswear.” To me this presents a problem. Remember, that this is a really good restaurant with 3 Michelin stars which by its very definition means it’s a restaurant `exceptional cuisine worth the special journey’. By having this dress code you have the unhappy situation of people turning up in all kinds of clothes. The Americans have a field day with their odd semi casual khakis/chinos, tasselled shoes and peculiar bomber jackets while some of the Brits turn up in crumpled shirts. This, I did not like. For a restaurant of this stature, I believe a jacket, at the very least, is necessary. The second problem, I felt was the lack of atmosphere, lack of calm and intimacy in the restaurant. The room was small and I counted at least 10 wait staff [maitre d, captains, sommeliers, and waiters] and 3 bus boys continually pacing. The staff were not all French but rather like Ramsay’s influences, more eclectic. A few were Oriental, a Canadian, a Desi and a Scot with the usual complement of Eastern and Western European.

Service standards were excellent, absolutely no complaints. You were escorted to a toilet, your coats taken and returned with no questions concerning identification. If on a table for 2 one person went to the toilet, immediately, a captain would walk up and engage in conversation with the person waiting at the table. Communication between the staff was complete and seamless. They saw we came in by taxi, so, on paying the bill we were asked if we would like a taxi ordered. And, oh yes, the menu with the prices is only given to the host.

The food was absolutely top notch. Very skilfully prepared with each individual ingredient shining through. Each sub component to a dish [and there were many sub components to each dish] had an independent cooking technique which was in itself intricate. Each dish had customised crockery all of which means greater cost. The cutlery was all Sterling Silver, which must have cost a fortune to get and now with silver prices being what they are, must be worth a proverbial king’s ransom. There were 3 menus. A 3 course with multiple choices in each course, a 7 course menu exceptional and a deluxe, seasonal 7 course. The advantage was that each person on the table could, if they wanted, have had a different menu. Imagine the service standards to serve this kind of order. Imagine the stress in the kitchen. Remarkable. What we discovered while eating was that the simple 3 course meal had 1 pre starter and 3 amuse bouche. We both stuck with the a la carte 3 course.

While having our Champagne, we were served a pre starter. This was what I called a play on shapes. No photo unfortunately as the starter came out so quick we could not react. A mini Cornetto filled with Cream and Smoked Salmon, a Scotch Egg with Quails egg soft in the centre with a shaving of Truffle and a rectangle pastry sandwich containing Caponata wrapped with a bit of Salami.

We ordered a very nice wine. This was the St. Laurent Alte Reben, Gerhard Pittnauer from Burgenland, Austria. It was a light elegant red with a heady berry aroma.

After this came an amuse bouche of Lobster topped with Caviar in a Tomato Consommé with peas, double beans, tomato and a minute amount of spring onion. This was astounding. The Tomato Consommé was so full of flavour while being so clear that my mind was fooled, I could not believe this liquid was tomato. Each vegetable in the dish was perfectly cooked and vibrant.
Now it was time for the Starters. HRH the Queen of Kutch had Ravioli of Lobster, Langoustine And Salmon with a light bisque of Lemongrass and Chervil Velouté while I had the Slow braised Pied De Cochon [Pigs Trotter] pressed then pan-fried with Ham knuckle, poached Quail’s Egg and Hollandaise Sauce. HRH's Ravioli, unlike most, was exceptional as it had small chunks of Lobster, Langoustine And Salmon instead of the cheaper option of making a Mousse of the ingredients. Both were outstanding.

For our main course, it was Roasted fillets of John Dory with Chorizo Couscous, Baby Squid, Artichoke and spiced Tomato Jus for HRH. I had the all male dish of Butter poached Dedham Vale Beef with Braised Short Ribs, Roasted Bone Marrow and Scottish Girolles. The trick here was that the Girolles came in a little, very hot cocotte that had the Girolles sizzling in butter. So if they were not promptly served you would have had burnt offerings resulting in the entire table’s food requiring to be returned to the kitchen and represented.


After this it was another amuse bouche of mango with Jasmine Tea and Passion fruit. A quick refresher. 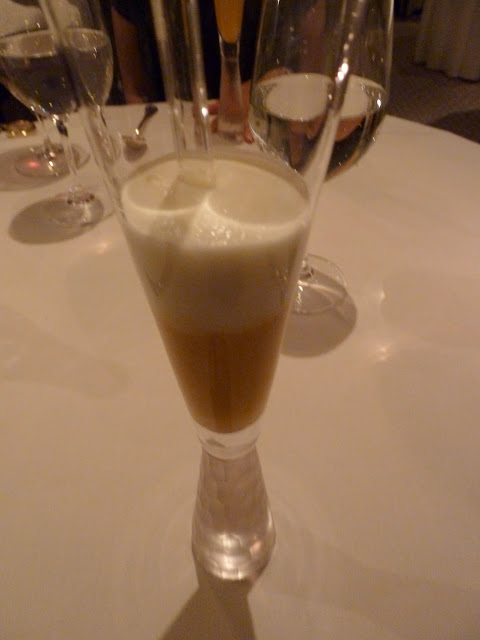 Deserts were a Banoffee Pie Soufflé (banana and salted caramel crumble) for HRH and Bitter Chocolate Cylinder with Coffee Granité and Ginger Mousse for me. Once again superbly cooked and the Soufflé was as it should be, light, flavourful and holding its shape. The Chocolate cylinder was, to use Rashmi Uday Singh’s language, yummy.


Despite this it was still not game over. It was time for Petit Fours. We got 3, a truly ghastly Turkish Delights; Strawberry Ice Cream coated with White Chocolate and really smooth bitter chocolate ganache. We were instructed to eat this with our fingers, which we gladly did. The Turkish Delight, I must repeat, was anything but that, it was horrible.

Last impressions? Great food, high quality, highly refined, impressive use of techniques, skill and presentation. Service to match the food. Very ordinary atmosphere and ambience in the restaurant, much too busy with all the staff bustling and frenetic.

Has this bested our favourite restaurant overall - Le Gavaroche? Nope. Has this bested the most charming restaurant – Galvin Le Chapelle? Nope.  Has this wowed us with the food like Koffman did? Nope.  Is it very good and should you go here. Of course. Does it deserve 3 Michelin stars, yes.
Posted by Stonethrowers Rants at 2:01 PM