Bao is a new highly regarded restaurant/café/food truck gone upmarket/diner place in deep Soho London. Bao was started by Erchen Chang (originally from Taipei) along with his brother and sister; Shing Tat and Wai Ting Chung, as a tiny street-food stall in north-east London.  They were backed by the new and fast becoming all-powerful Sethi family who run/own/and have funded among others – Trishna, Gymkhana, Bubbledogs, Kitchen & Table and Lyle’s. This enabled them to open Bao on Lexington Street in Soho. 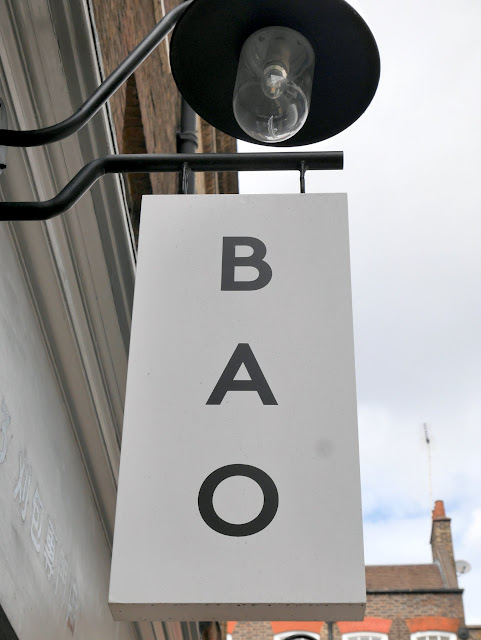 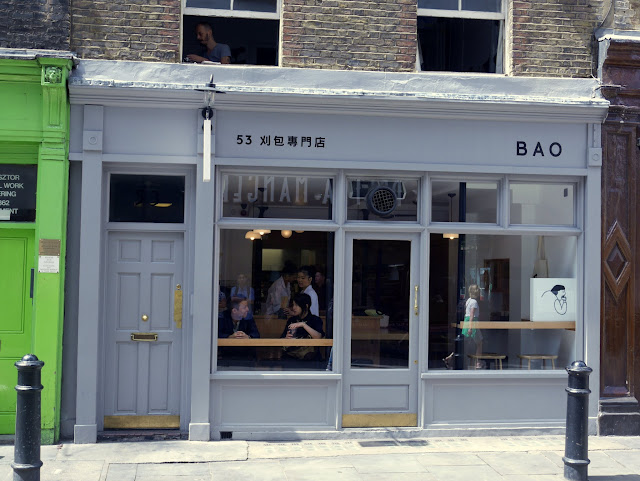 Bao the restaurant is an uncategorised – shall we say – restaurant. They say that Bao the restaurant has been influenced by David Chang the pioneer Korean American restaurateur whose Momofuku paired food with revolutionary drinks using new techniques and technologies devised by dessert chef Christina Tosi.

Bao is a small place done in blond wood with tiny tables, communal seating and small uncomfortable stools that do not encourage lingering. As with the trendiest places, they follow a no reservations policy. We reached at 11.50 for a 12.00 opening and found that we were already in line. The line steadily grew. Tables turn quickly as food is brought swiftly and eaten equally rapidly. But, be prepared to wait if the place is full. At about 11.55 a waitress came out of the restaurant and handed us a menu. This was much like a Dim Sum menu. Soon we were escorted to our tables. On the tables were pencils to fill in what we wanted from the menu. We were warned that each Bao is a single serving. The Scallops too were single servings. We ticked, numbered and waited. 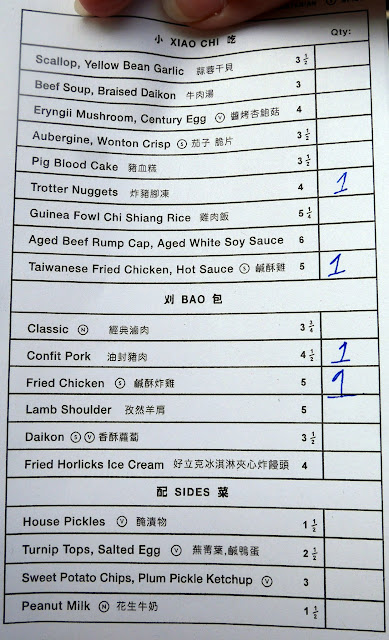 A Bao is steam bread with rice flour or wheat flour, uses yeast, and is often stuffed. It is also called Baozi or Pao. The menu has three sections. The Xiao Chi section [translates as `small eats’] has plates which can be shared. In addition there were Baos which are all single pieces, and sides. A separate menu had teas, Sake and beers. We dutifully wrote out our orders and waited. A waitress arrived checked our order and said that the Scallops in the Xiao Chi section are single Scallops so we should order two. We did and were glad we did.

First came the Scallops with Yellow Bean and garlic. A single Scallop in a shell with a sauce, The Scallop was a single bite. I picked up the shell and drained the juices into my mouth. Fabulous. Cold, tart and full of Umami flavour. A wonderful start. 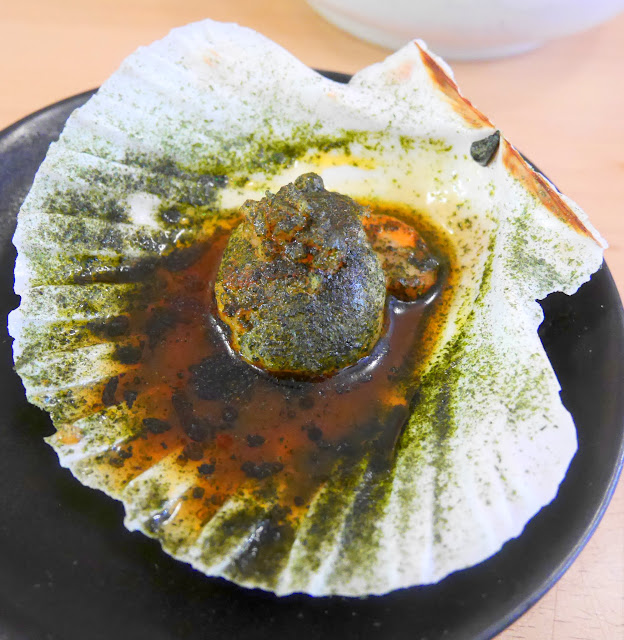 The Pigs Trotters were served next along with the Taiwanese Fried Chicken with Hot Sauce. The Pigs Trotters ended up being three little Piggies – sorry! The Trotter was cooked, the meat shredded and reformatted, covered in a standard breading mixture and deep fried. The result was a hot crisp outer coating and moist melting meaty inside. This was served with what seemed to be a very Indian chutney of spring onions and green chilli. These were nice, not outstanding. What was however outstanding were the Taiwanese Fried Chicken with Hot Sauce. A serving consisted of 4 pieces, both breast and thigh. A Chicken Pakoda to us Desi’s. There was a brilliant crisp batter coating a tender moist piece of chicken. The hot sauce was like the red Chinese chilli sauce we have all grown up with. A fairly simple dish, however, how often do you get something fried that is crisp on the outside? Not often alas. This was an example of how to do it. 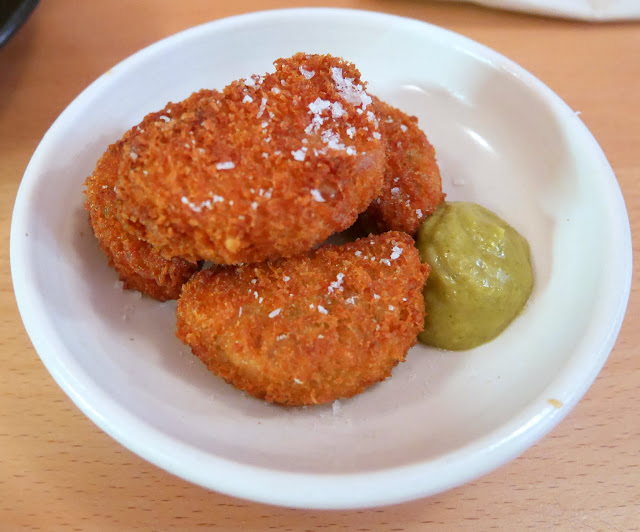 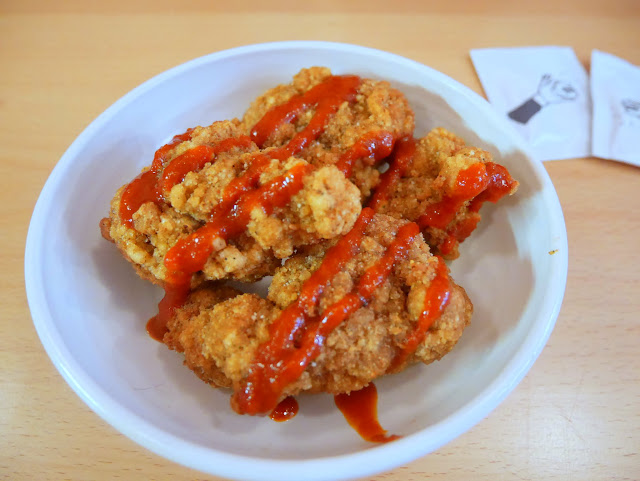 For the Bao’s we ordered 3. The Classic, which we both thought was the best. You got a Bao shaped like `Pacman’ from the old video game. Inside was sweet shredded pork, tangy pickled Chinese vegetables and garnished with fresh Coriander -`Dhaniya’ – leaves and crushed peanut. This was brilliant. The pillowy soft Bao, the crunch of the Peanut and the at once sweet, sour and fresh filling was a winner. A wonderful dish. The next Bao we got was the Fried Chicken Bao. This chicken was different from the Taiwanese Fried Chicken. It had a different batter and the pieces were smaller. The waiter said the chicken was marinated in Soy Milk. The Bao had Kimchi in along with the crisp Chicken. Very good indeed. Again this was a contrast of flavours and textures with the soft Bao, crunchy hot fried chicken and salty sour spicy Kimchi. The Pork Confit Bao was different. Here the filling was discernable pieces of confit pork belly with a spicy sauce with chopped raw onions [which deeply upset the Royalty present] and garnished with crisp fried Shallots what we would call `Birista’ onions. This was good but paled in comparison to the Classic Bao. 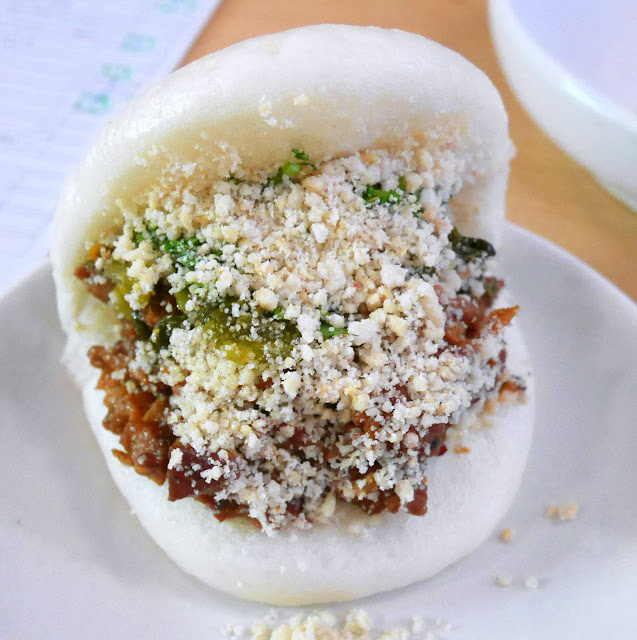 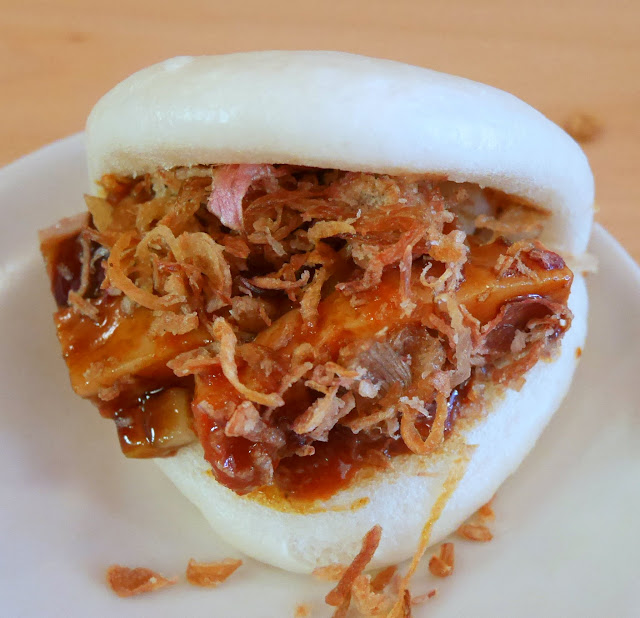 We did not have any of the drinks nor the sweet Bao.

All in all, an exciting restaurant to visit for lunch. Different good well cooked food albeit a little expensive. Though there is a lot of Umami flavour going around I personally thought the food was quite heavily spiced, a little too `tikha’ for me. I find the use of spice in food that I do not expect to be spicy, disconcerting. You may well as why I thought this food would not be spicy? Well, I have no real answer. I just assumed it would not be spicy.

Do go if you are in the area. But beware, costs really add up as you start ordering.

Posted by Stonethrowers Rants at 6:46 PM