The Portland Restaurant at 113 Great Portland Street in Fitzrovia, off Oxford Street. This is one of the new bright shining stars on the London dining scene. Modern British is the cuisine.

The restaurant is done in the minimalist Scandinavian style, with little money being spent on décor. A few paintings adorn the walls bringing some softness. The unique feature is sound absorbent panels on the ceilings. Big big relief. Despite the fact that the cuboid room has no carpeting right angled surfaces which reflect sound, these panels make a huge difference. The noise level is low, far lower than what you would ordinarily expect. Wooden tables, no table cloths, no place mats. Simple white plates. The front of the cuboid has seats for 45 with a big window overlooking the street and the back of the cuboid has an open kitchen bustling with activity.

Will Lander is the owner of Portland. He also has an interest in the Quality Chop House, a British restaurant. Will Lander has an impressive family. His father Nicholas Lander was a restaurateur and is a formidable restaurant critic. His mother is Jancis Robinson, a wine critic, writer of wine literature and successful author of several serious books on wine. The Chef is Merlin Labron-Johnson, who, though British born, has worked extensively in Europe.

The restaurant opened in January 2015 to almost unanimous raving and ecstatic reviews. Then, in September this year, within a few months of opening, Portland won its first star in Michelin. Needless to say, the restaurant has been jam packed since then. Getting a table was not really a piece of cake.

The menu is small, very small, and changes very often depending on the produce available. Remember this is Britain, and, as in Europe, there is a vegetarian option available in every course. To give you an idea, you have a choice from 5 snacks. 3 first courses, 3 mains, 3 sides and 4 deserts. The wine list is also short and relatively cheap. You do have a choice of more expensive wines from a separate list. 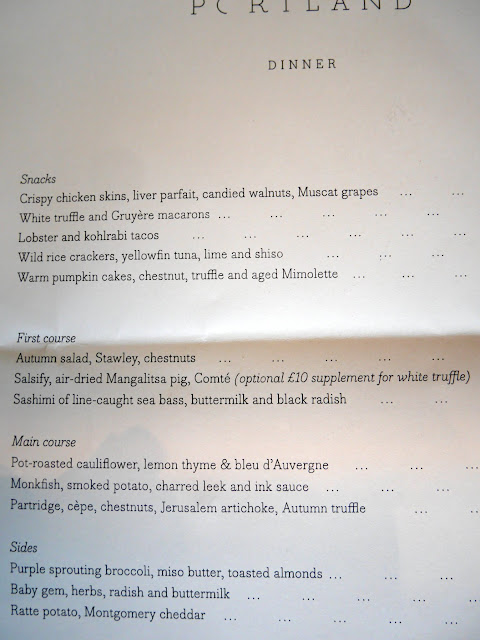 Our dining companion was the Doctor Businesswoman whom readers will know well by now. With our drinks ordered – G&T for me, a Plum Gin Sour for HRH the Queen and a glass of White Wine for the Doctor Businesswoman – we asked for our Snacks. We were told that each plate had two pieces, so, we asked if they could make us plates of 3 paces as there were three of us. The Restaurant obliged. I really don’t know why other restaurants are not as obliging. You do not have to offer the additional portion free; simply add to the cost proportionately. I also do not for the life of me understand why a restaurant cannot simply let you know when ordering that the plate consists of `X’ portions, and, since you are `X + 1’ or `X + 2’ they could, if sire so desires, increase the serving size. This is not rocket science. Try doing this at any restaurant serving Dim Sum. They will look at you as if you are insane.

A word about the bread and butter. The bread is bought out - nothing wrong with that – but the butter, it was sensational. The butter was served with shaved dried Ox heart. Oh dear God! My Hindu sensibilities, my culture, my Hindutva were shaken to my pagan unbelieving core. This was simply sensational. The savoury almost Umami edge that the shaved Ox Heart brought to the butter was brilliant. An excellent touch. Many superlatives in the last two sentences.

We had 3 snacks. The first was crispy chicken skins, chicken liver parfait, candied walnuts and grapes. This dish was a knockout. Brilliant. Just think about it. Chicken skin is often wasted. Chicken Liver is often wasted. You take both these ingredients and turn them into a brilliant snack and charge money for them. Very smart. The second snack was rather strange one as far as I was concerned. This was a White Truffle and Gruyere Macron. Strange because it was sweet. It was a bit of a shock to my palate to get a sweet Macron as a snack. The ladies liked it. The last was a Taco, Lobster rolled in thinly sliced Kohlrabi – which we in Mumbai call `Alkul’. The slightly crunchy Kohlrabi and the sweet flaky Lobster inside.  Very nice indeed.

The first courses were as interesting. HRH the Queen and me both ordered Salsify, dried Mangalista Pig, Comte and, at an optional £10 supplement, shaved White Truffle. A bit of explanation here. Salsify is a long root vegetable [Jains can’t eat it] and Mangalista pig is a breed native to Hungary. The ham was dried to a crisp. Comte is a cheese much like Gruyere. This was a very interesting dish. A combination of ingredients I have not previously eaten. Good dish. The knockout dish was what our friend the Doctor Businesswoman ordered. Sashimi of Sea Bass, buttermilk [not really Lassi but the liquid that separates when you make butter at home] and black radish. This was presented beautifully, which you will see from the photograph, and tasted sublime. This was a good start.

For the mains, HRH the Queen of Kutch had Monkfish, smoked potato, charred leek and an ink sauce. The smoked potato is a puree not an actual potato. She pronounced this as excellent. The Doctor Businesswoman had Partridge [which is in season now being autumn] mushroom, chestnuts, Jerusalem artichokes and Truffle. A wonderfully seasonal dish. The partridge was served pink, as it should, and once again no complaints whatsoever. There was a special for the day on the blackboard. This is what I had. 8 week dry aged Sirloin with charred Brassicas and a smoked egg emulsion. I cannot recall having had 8 week aged beef, so I was intrigued, but was not disappointed in the least. The smoked egg emulsion was wonderful. On enquiry I was told that the egg is not smoked but the butter that is used to make the emulsion is. Basically this is a Hollandaise sauce made with smoked butter. Unfortunately, both the Doctor Businesswoman and I thought that our dishes lacked salt, so we asked for some. The dishes improved dramatically after that tad of salt that we sprinkled. To share, we ordered a serving of Ratte potato with Montgomery Cheddar.

The one theme that ran thru the meal was that there were several dishes that used charred, smoked or black as ingredients. Nothing wrong with that and I am sure that with the passage of time, changing seasons and changing menus this theme may fall by the wayside.
We ordered two deserts. The first was a Hazelnut Éclair which was top class. Crisp Choux Pastry, crisp caramel glaze on the pastry and lovely creamy smooth Hazelnut cream filling. The second was overly sour, unlovely desert of Bitter chocolate, baked milk, blackberries. This was an adult desert. HRH the Queen loved it; she is the queen and an adult, as did the Doctor Businesswoman. Alas, this desert did not tickle my immature palate.

All in all a good meal. Not outstanding. Many hits some misses. Worth a visit.

Posted by Stonethrowers Rants at 6:48 PM