Tetsuya’s is probably Sydney’s best-known restaurant. Notwithstanding Australian Masterchef’s huge influence on our knowledge of all things Australian, Tetsuya’s is foremost in the mind of the well heeled gastronome. Being used to the difficulty in snagging tables at the world’s better restaurants, we made a booking at Tetsuya’s very early on. We were looking very forward to this meal.

As I write this, we have been in Australia for only 3 days. Upto now, while all the food and restaurants seem attractive, there is really no discernable Australian cuisine. I would say that a majority of the restaurants that we see all feature a combination of, steaks or pork ribs, pizza, pasta, grilled fish, fish and chips, pies, Schnitzel and burgers. Much like a slightly more non vegetarian Indigo Deli without the “tikkha”. Of course, the food is much better than at Indigo Deli, but you get the picture. All very “friendly” food. Tetsuya’s too has no real Australian heritage. The food is Japanese and French, quite schizophrenic. The owner Tetsuya Wakuda is 60, and was born in Japan. He moved to Australia in his early 20’s and after working with Tony Bilson, was greatly influenced by French Cuisine. Today, Tetsuya’s is exactly that, a Japanese French restaurant with Australian ingredients.

The restaurant is quite large for a fine dining restaurant with some 4 dining rooms of varying sizes plus, private dining. A heritage bungalow with a large Japanese garden houses the restaurant on a busy street in Sydney CBD. It was a short walk from our hotel. The restaurant has only one menu – a 8 course degustation at a fixed price comprising of 4 fish, 2 meat, 1 pre-dessert and 1 dessert. We were welcomed by heavily accented European staff, nope not Australian. We were shown to our tables in one of the dining rooms.

What was most peculiar, and certainly something we have never experienced before, is that the entire dining room was seated on tables with chairs looking out of the restaurant into the Japanese garden. One side of the dining room had floor to ceiling windows. While our table had unrestricted views of the garden, the table behind us had a view of my bald patch as well as the garden. Disconcertingly, the waitstaff approach you from behind. We have never had this kind of experience. Down under! Things go topsy turvy.

The tables had tablecloth, though the cutlery was really poor quality stainless steel. Kishco has a similar design. Strange.

The meal started. The food was good, when the kitchen decided to serve us, that is. Here are photos of what we ate. I am not going to describe each dish. But after the photos, you can read what we experienced and what our opinion of the evening was. 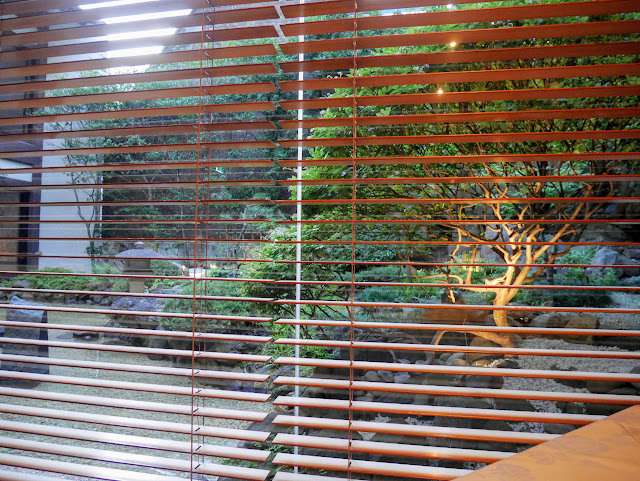 My view of the Zen Garden. I looked at this for 3 hours, except when I went to the kitchen. 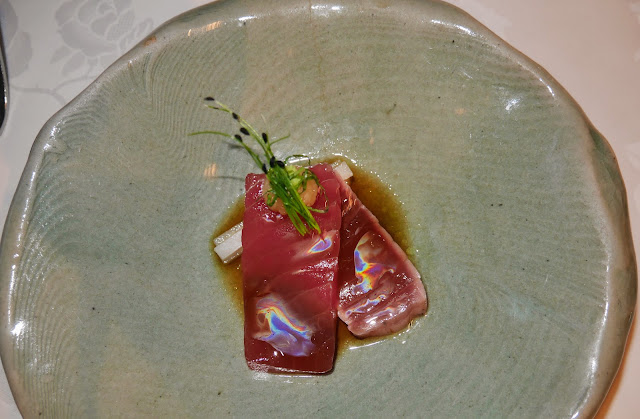 Tuna with Daikon and Wasabi - Uncooked 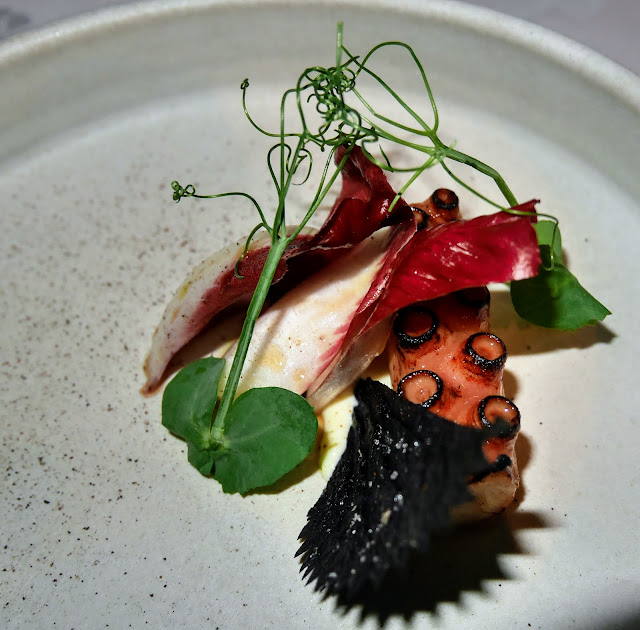 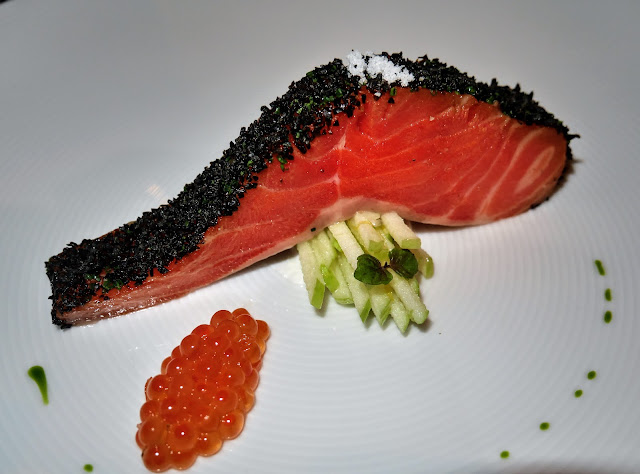 Confit of Ocean Trout with Salad of Apple & Wiltop -Cooked earlier assembly job. The most photographed dish in the world, allegedly. 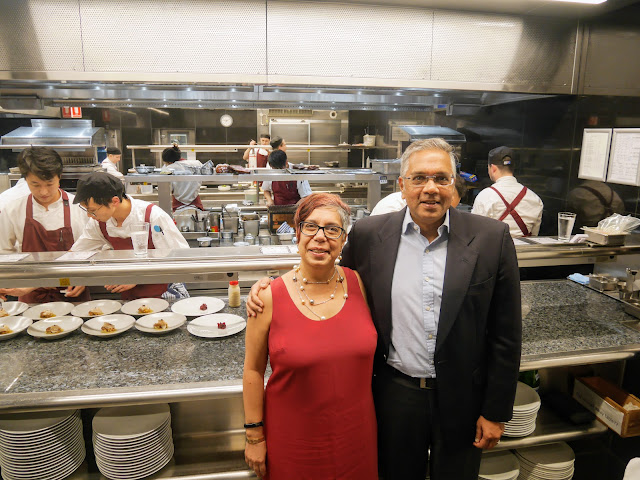 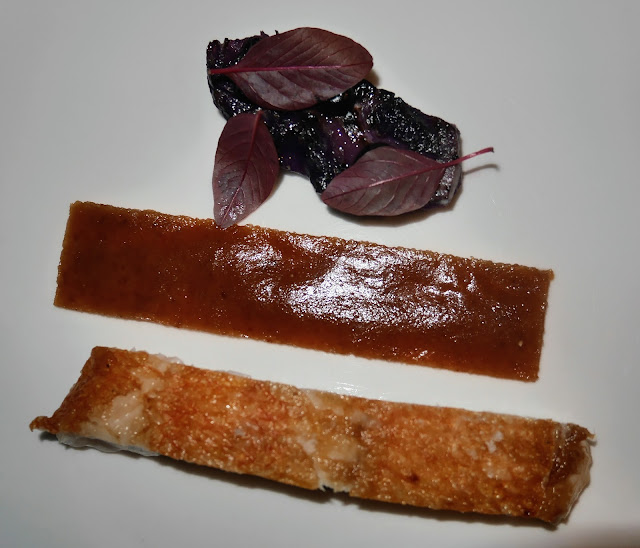 Imperador [a type of fish] with Smoked Macadamia and Black Garlic. A hot dish 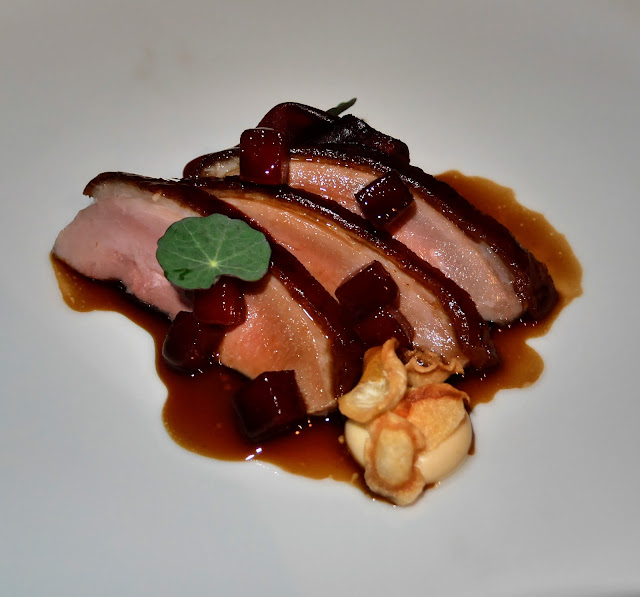 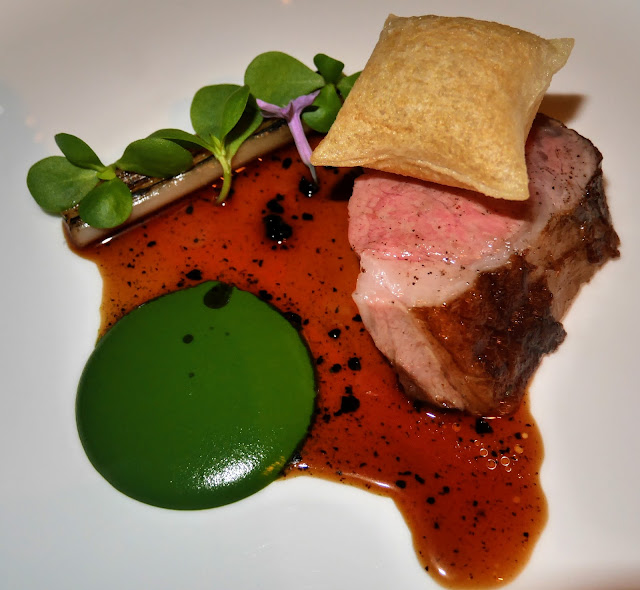 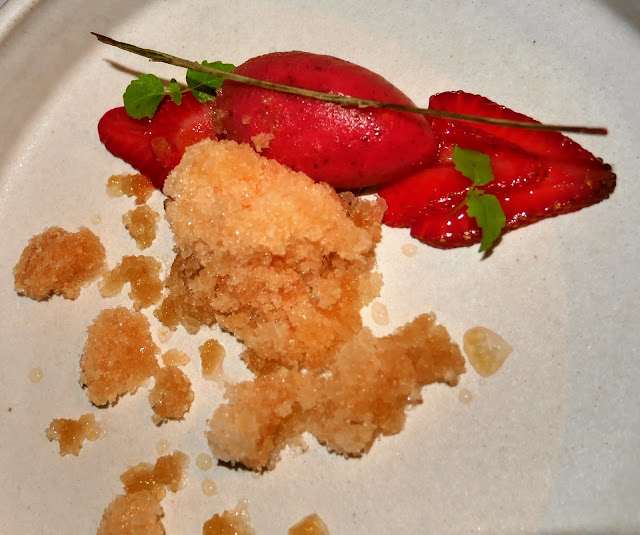 The service. While the staff was kind, engaging in conversation and had a sense of humor, there were (a) not enough staff and (b) consequently were inefficient. Wine topping up was poor, with glasses remaining empty for long periods. Folks, simple economics, if you get us to drink more wine, alcohol loosens wallets. Get it? That means more profits for you and more pay.

There was a huge problem somewhere. Either the kitchen could not cope or did not care or there was miscommunication between front of house and the kitchen. We had an 8 pm table and serving the 8 courses took over 3 hours. That is long, very long, Not only was it long but the gaps between courses was at one stage 40 minutes. I kid you not. When this was pointed out to the staff, as a sort of compensation, we were taken to see the kitchen! Midway thru our meal. Really.

Now, here is what I find strange. The restaurant serves only the 8 course degustation menu. This is quite unlike most top end restaurants which have an A La Carte plus at least one or two additional tasting menus. This means the kitchen is cooking (i) several different dishes (ii) the same dish in different portion sizes – an A La Carte portion will be larger than a taster portion and (iii) the kitchen has to maintain the flow and sequencing when simultaneously cooking an A La Carte and a Tasting menu. All this is challenging. Here at Tetsuya’s its just one menu and they made a real hash serving it. A table seated an hour after us was eating the same course as us about 2 hours into our dinner! Obviously, they had a very different dining experience from ours. Did the kitchen just say fuck it, let’s group the tables together as we can make our lives easier? I have no idea. But something was wrong – hence the kitchen visit as an apology. Look at the websites of any reasonable restaurant whether Restaurant Gordon Ramsay at Royal Hospital Road, or Core by Clare Smyth or Alain Ducasse or even A Wong. Multiple menus are par for the course at this level.

Almost every top end restaurant you go to will give you an amuse bouche or two. Here nothing, absolutely nothing.

To make matters worse, if you look at the dishes, of the 6 savory courses, the Tuna is uncooked, the Octopus grilled well in advance as is the Confit Ocean Trout. These are just assembly jobs and a matter of opening a fridge door. That is 3 cold dishes. After that you have just 3 dishes that are actually cooked a la minute – the Imperador with Smoked Macadamia, the Duck Breast and the Lamb Rack. The desserts come from a separate kitchen. Both desserts were cold, hence, just assembly jobs no cooking a la minute. You are not talking Souffle or Tarte Tatin. Why could the kitchen not cope with this sort of menu. There is no element of surprise, ok, you may get a couple of last minute food allergy changes but having a set menu with 50% cold assembly job food surely is something a kitchen of this caliber should execute with consummate ease. But no! we endured long pauses, and 3 hours of sitting. Boss, try sitting in your best clothes for 3 hours on your best behavior, nursing wine, smiling on demand and occasionally being fed. It is not fun. I am serious. Just try it, sit at your dining table for 3 hours and smile at your wife, children and whoever passes by during this time.

To conclude, a very strange evening. Decent food but marred by some serious service issues. The seating and being served from behind was weird. A vastly overrated restaurant. There are plenty others doing as good, if not better, serving more complex food with more complex menus. Frankly, most others even cook the food for you and don’t do an assembly job.

One last point. I really do not get aspects of Japanese food at all. The object of going to a restaurant is getting something cooked. It is not sourcing. That is basic. You have to source. But then you have to cook. Knife skills I understand, but here none were on offer. Saying you are serving Japanese food and then going about it in such a lazy or uncaring way with this hype I do not get.

Posted by Stonethrowers Rants at 7:44 AM