Getting the food we wanted in Bruges was a bit more challenging than Ghent. For a start, with the huge tourist business, if you look for a restaurant with the local dishes, the restaurants seem to be tourist traps serving a mish mash of local food and pasta. On the other end of the spectrum you have some serious fine dining restaurants with anywhere from one to three Michelin stars, all of which we did not want to eat at. Slap bang in the middle were the local fine dine restaurants which served very French and Italian food, ranging from steaks to Monkfish with Curry and Scandinavian Styled food. So these were out for us too.

The first night we were to eat at Bistro Den Huzaar. We had read about this during our research and made a reservation from Mumbai some weeks ago. The Bistro looked very good. White cloth tablecloths, decent crockery and a menu comprising of many local dishes served in decent surroundings with pricing that was slightly higher than most touristy restaurants. I know I am making a statement that is highly suspect on logic. Bruges relies on tourism. All restaurants have a huge non local therefore tourist custom. But you know what I am trying to say. This was not for the budget conscious tourists.

One aspect that we noted with much happiness was that if you reserved a table at a restaurant in Ghent or Bruges you were given a nicer table by a window. Another aspect we noted was that no one in Belgium, at least in the restaurant we went to, obsessed about water. Water was never offered on the table. At Belga Queen the waiter offered us water and we said we would be happy with a jug of tap water. He sniggered and said, we do not do tap water in Belgium. We had no problem with that. Water is just a useless con job that we are continually fighting against. This we observed across the board.

After we were seated at Bistro den Huzaar, we get our usual bread, some butter and a little bowl of Rabbit Rillettes. Rillettes are a classic French Bistro dish. Normally pork, often rabbit, duck and goose are made into Rillettes. Rillettes are a sort of cooked pate. What is important is that the meat should have a high fat content, up to, 30% fat. The meat and fat are cubed, salted and cooked long and slow till the meat breaks down and becomes a paste and amalgamates with the fat. The paste is then stored with in a container a layer of fat on top. Rillettes are particularly delicious. You spread a bit of Rillettes on a piece of bread and have a pickled Cornichon. Along with the Rillettes we got some Parsley Oil and some Mayonnaise based sauce. That was a good start.

For our starters HRH the Queen of Kutch ordered the favourite Croquettes but instead of the usual Cheese these were Sweetbreads. The Croquettes were delicious but a bit low on the Sweetbreads. Pity. I got one of my favourite soups the French Onion Soup with was being served with Camembert topped toast instead of the more usual Gruyere or Comte. The soup was good. Just what the doctor ordered on a cold evening.

Main courses, HRH the Queen ordered Duck Confit. Unfortunately, while the Duck was very well cooked, they had not been able to crisp up the skin. So it was not very much fun to eat. This came with some fried potato and a strip of Bacon crisp fried.

I ordered a restaurant speciality, Pork Cheeks with Local Beer and Cherries. This was served `Dum’ style in a small pot covered and sealed with Puff Pastry. Very well done. My dish was really delicious. The Pork Cheeks were melt in the mouth. The Cheeks were served with Potato Dauphinoise which was delicious.

Dessert was an order of another classic French bistro dish, Chocolate Mousse. A lovely dense rich mousse. A good meal, well worth an evening out.

The next night were went to De Koeste a restaurant recommended by the Concierge at the hotel we were staying at. The primary reason for going there was because HRH the Queen wanted to eat Mussels which are a Belgian speciality. As a sort of amuse bouche we each got a small plate of boiled shrimps. HRH the Queen ordered a plate of cured Ham from Hungary, much like Parma Ham while I ordered a Shrimp Cocktail, my second of the season, the first being at J Sheekey. The Ham was top class. My Shrimp Cocktail was very good, and, like the description said, it really had shrimps and not prawns. 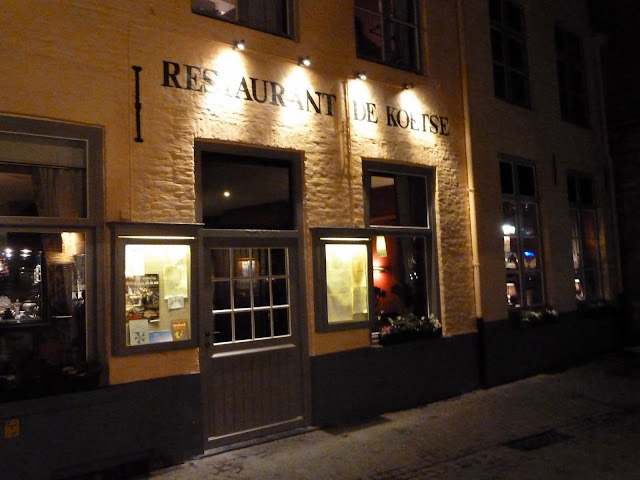 HRH the Queen ordered a bowl of Mussels with Belgian Beer and Cream. I ordered a Steak which the restaurant cooked on an open charcoal fire. The first Mussel eaten left HRH the Queen very dissatisfied. She said the Mussel was sandy. She ate a few more Mussels and continued to be unhappy. She left most of the dish. The waitress looked concerned and was told that the Mussels were sandy. My steak with a Béarnaise Sauce was unremarkable. We finished the meal with a shot of aged Jenever which is a sort of Gin. It’s heavily flavoured with Juniper Berries which are one of the prime flavouring agents of Gin.

That night was most unhappy for HRH the Queen. The Mussels acted up and Her Highness spent the night throwing up. The next morning she was a bit wobbly.

The last meal in Bruges was to be at a bar cum Brasserie called the Bierbrasserie Cambrinus. This place offers local dishes and has a great reputation. We made our reservations and walked across. The bar offers 400 yes 400 beers. Have a look at the menu listing the menus. It’s huge. With our beer we ordered something called Beer Cheese and Beer Ham. Basically its Ham and Cheese. The Cheese is a mild, Cheddary cheese and you are given Celery Salt to sprinkle on top and Mustard to dip the pieces of cheese into. What an absolutely perfect snack to have with a beer. Not the usual peanuts and wafer and `Ghode ka Channa’.

After a few beers we ordered our respective dinners.  HRH the Queen ordered her favourite being Rabbit with Prunes prepared with their House beer “Gambrivinus” served with fried Potato Croquettes.  She lapped up the dish after having remained hungry the whole day. The Croquettes were particularly good. I ordered yet another stew being Flemish Carbonades prepared with “Gulden Draak” Beer, served with Apple Sauce. Very good. Both dishes came out steaming hot.

We did ultimately eat well in Bruges. Yes, the Mussels rendered HRH the Queen Hors De Combat but, that, I guess is something to be taken as being a peril of travel.

Posted by Stonethrowers Rants at 10:38 PM