Seven Park Place is described, aptly, I may add, as a jewel box of a restaurant. This is in the St James Hotel located in Park Place - a lane leading off St James’s. The Royal Overseas League Club, so beloved by Indians in the 1970’s and 1980’s is down the road. The hotel is part of a mini German Hotel chain, which I discovered had hotels in Cologne and Stuttgart where we had stayed in the past.

Seven Park Place has William Drabble as the Executive Chef. This man has logged up a serious reputation. He got is first star in Michelin at the age of 26. Then he took over from Gordon Ramsay at Aubergine and headed it till 2009 after which he has been in charge of Seven Park Place. The food is described as “influenced by classic French cuisine, using the best British ingredients and taking inspiration from the seasons.” The restaurant has a single star in Michelin.

The actual restaurant in an alcove is very small, with just 3 tables seating probably 11 diners. The area around the bar has got some tables added so as to increase the seating. The whole place is decorated extensively and heavily. Carpets, wallpaper padded walls chandeliers and the works. The atmosphere is sophisticated, rich and quiet. Reminded me of Le Gavroche. We were seated at a large table with banquettes on three sides. Lots of space, a luxury in todays times where restaurants are crammed to an inch of their lives with tables.

I had read a lot of good things about the restaurant. It seemed to me that it was also off the normal Social Media feeds i.e. Twitter and Instagram. Doctor Businesswoman who is our frequent dining companion was travelling, her sister in law S joined us. As we entered our coats and scarves were whisked away and we were seated in the empty dining room. Good chance to take a few photographs. 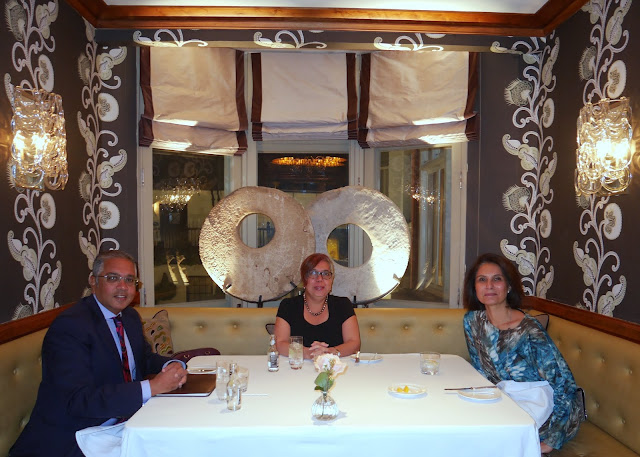 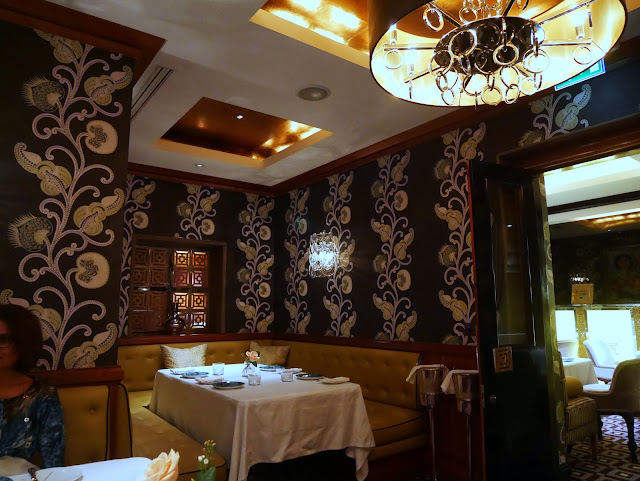 Menus were handed out, just 3 mercifully, the A La Carte, the Gourmand or Tasting Menu formed one, the substantial Wine List the second and to follow the Pudding Menu. All of us chose the A La Carte, and all of us chose different starters and mains. A usual question of are we allergic or intolerant to any ingredient was asked and answered in the negative. Gin and Tonics were ordered – Tanqueray Rangpur was offered. The wine list perused and a Saint Emilion ordered. All the ordering done we settled down. 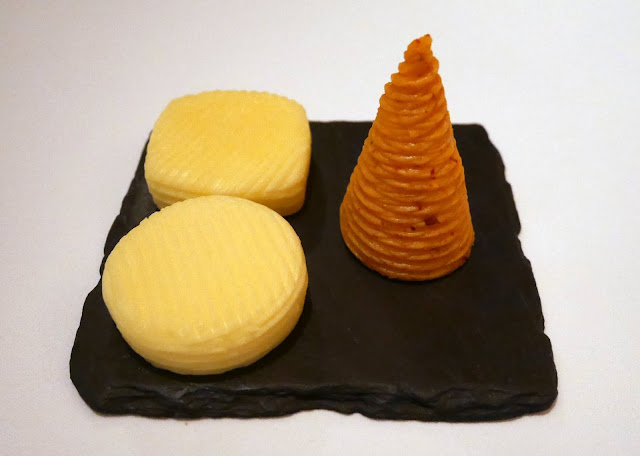 An Amuse Bouche of Crab Veloute turned up. This was exceptional. Deep flavor and served really hot. We all devoured it and commented that if an Amuse Bouche was so good, hopefully the food would be as good.

Soon the first courses turned up. Each and every one of them a knockout.  Our friend S ordered the signature dish of Lobster with Roast Cauliflower, Cauliflower Puree and Lobster Truffle Sauce. We all had a slice of the Lobster tail, and, honestly, it was cooked perfectly far more accurately than the Lobster that HRH the Queen of Kutch had a few nights ago at Alain Ducasse at the Dorchester.  HRH the Queen of Kutch ordered Scallop Ceviche with Jerusalem Artichoke and Truffle Vinaigrette which you can see in the photograph as the dots on the plate. This was once again brilliant. I ordered a Seared Foie Gras with Gingerbread Crumble, Poached Rhubarb and Confit Ginger. Tremendous dish. The Rhubarb as pureed as well as served poached. The two dots you see on the plate were the Confit Ginger which turned out to be a sort of Ginger Jelly.

These dishes were seriously good cooking. We were all most impressed. 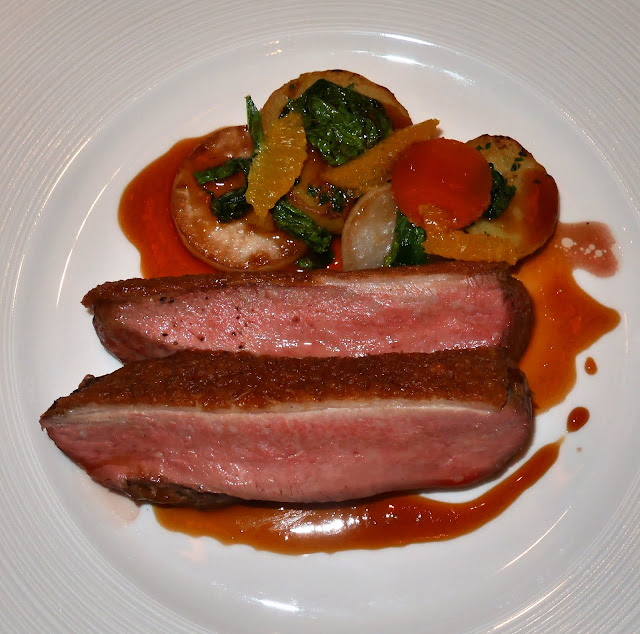 HRH the Queen of Kutch ordered a very manly dish, Veal Cheeks slow cooked with a Madeira Sauce and a Bone Marrow Mash. A wintery dish. The Cheeks were cooked perfectly, just a moment away from totally breaking down. Being Veal Cheeks they had a lot of collagen which made them even more unctuous when cooked. The Bone Marrow Mash was a work of art. A very smooth potato puree with brown butter, possibly Demi-Glace and Marrow. 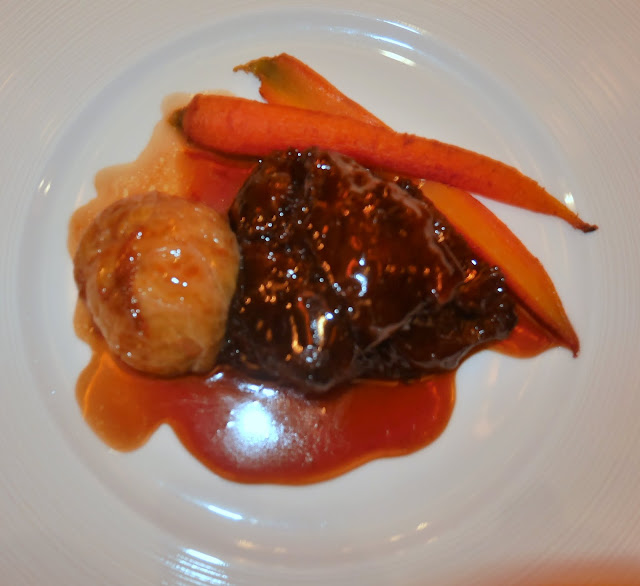 I had ordered Turbot with Leeks and a Vichyssoise Sauce. This was a most ladylike dish. Thinking about the dish, I realise how clever William Drabble is. The garnish on the plate was Potato and Leek. This was sauced with Vichyssoise which is quite simply a puree of Leek and Potato. 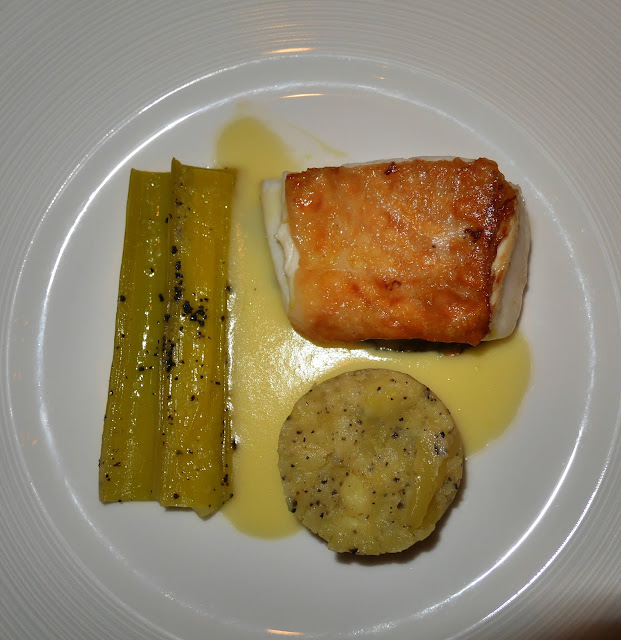 Like the first courses, this was consistently good cooking. The dishes all were attractive and came out hot. The proteins were all accurately cooked. The presentation was old style with no tweezers being used. No molecular malarkey here either, thankfully.

Then, we were served a pre-dessert. A heavy cast iron soup bowl with cold Rice Pudding, Candied Walnuts and other ingredients which I cannot for the life of me remember. OK, this dish was “free” if I could use that term, so it had cheap ingredients – rice. But, this was so carefully cooked with so many additional ingredients that it was far greater a dish than the sum of its parts. 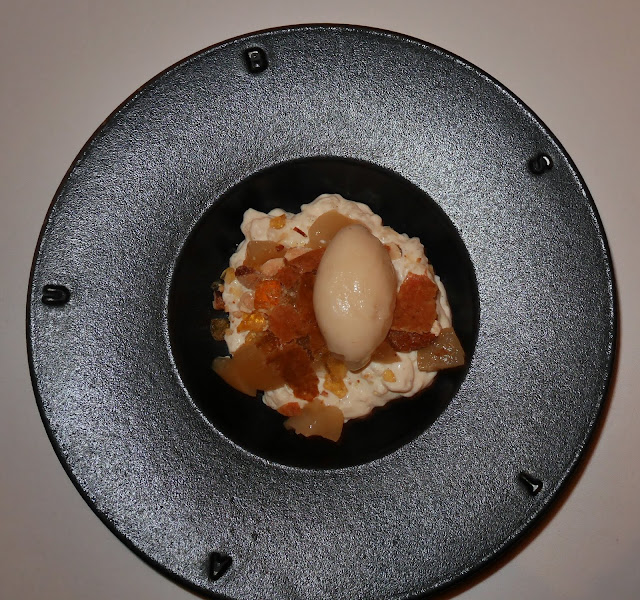 After all that food we decided that one dessert among the three of us would be more than enough. The most attractive on the menu, a Pineapple Upside Down Cake was ordered. This was decent; however, the pre-dessert was far better. Desserts is obviously a weak suit here. 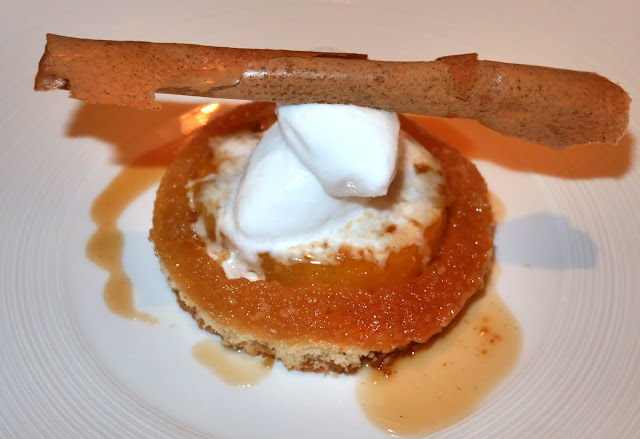 Overall, this was a fine meal and excellent overall experience. Everything about the restaurant was correct. This place is seriously recommended and is something we are definitely going to visit again.


Posted by Stonethrowers Rants at 7:17 PM