We had accumulated some frequent flyer miles on Jet Airways. Under their loyalty programme, if you do not use the accumulated miles, a portion of them gets forfeited. Then you fall into the trap of having too few miles to do anything meaningful. So what better to do than book a flight and use the miles. Chennai it was, for a short 3 night 4 day break.

We do like Chennai, though people look at us with considerable disbelief when we say that. We were staying at the ITC Grand Chola which is a really wonderful hotel. The room we chose had breakfast included as well as what they call “Luxury Hours” which is a two hour window every evening of drinks and snacks at the Residents Lounge. We are not breakfast eaters generally, but this was one breakfast we ate heartily. No lunch. A few kebabs with the drinks during Luxury Hours to dull the hunger pangs and we were ready for dinner.

The breakfasts at ITC are very good. I must say that the quality and taste of the 4 chutneys – Coriander & Coconut, plain Coconut, Railway Chutney [a coconut based orange hued chutney] and the Kempu Chutney [Coconut, Tamarind and Red Chilly] - served at breakfast were superlative as was the Sambaar. Of course the wide selection of Dosa, Idly, Vada, Upma, Pongal, Khara Bhat et al were top quality too. Also on offer were Parathas, Poori Bhaji, and similar North Indian dishes. I find that I cannot handle that level of spice at breakfast. Breakfast for me was some Muesli, a wedge of cheese, eggs, bacon and grilled tomato along with just a spoon of two chutneys and a Medu Vada. HRH the Queen mixed and matched.

As far as booze is concerned, Chennai suffers from the greed of the politicians. There is no local beer available except something called British Empire with a 6% alcohol content and Fosters Strong with 12% alcohol, obviously, made at breweries controlled by the politicians. No regular brands, no Kingfisher etc. Although, all manner of imported beers were available at 5X the price – Stella, Hoegaarden, Asahi etc. Spirits were similarly of dubious nature. Something called Old Cask Rum. No Old Monk no Hercules. Once again all manner of imported spirits were available at more than 5X. I drank British Empire which was not bad while HRH the Queen of Kutch drank an Italian Red Wine on offer during Luxury Hours.

Days were well spent lying by the pool catching up on reading.

We were clear we wanted to eat only Chettinad food. When researching on where to eat we were rather surprised at what we found. There are several non-vegetarian restaurants. In fact the level of non vegetarians is probably higher than in our Jainified Mumbai. What was more surprising was how many restaurants were chains with multiple outlets scattered not only all over the city, but often in Tamil Nadu, in neighboring states as well as internationally. Here are some multiple outlet chains. By multiple outlet I mean in excess of 10 outlets.

A newer phenomenon I saw was several restaurants serving what they called Arabian food. I guess that is a sort of sophistry to describe an upmarket Biryani & Kabab place. People really eat out in Chennai. And they eat traditional food. I saw relatively few of the American QSR chains.

Now a few words about Indian food. I am often accused of being critical of India. Never in my wildest dreams am I critical. Bharat Mata Ki Jai and all that. However, there is one inescapable fact. Indian food is Ugly Food. It, often, literally looks like sh*t. You all know what sh*t looks like. I will not elaborate. When you have braises, thick gravies and indistinguishable lumps of meat, you have Ugly Food. Mind you Ugly Food tastes very good, no complaints. It is simply ugly to look at. You will get what I mean when you have a look at the photographs.

The first night we ate at Maplai, a new, non-chain restaurant. They claimed that they served ancient recipes as well as food with a modern twist. We were looking forward to the meal. I tried to make a reservation but was told they did not accept reservations and that we would have a 15 minute, wait at maximum. When we reached we got a table at once. Friendly staff, who insisted we make note of their names and mention them when writing reviews on Zomato, presumably very appreciative reviews. This was a disturbing note on which to start our meal. 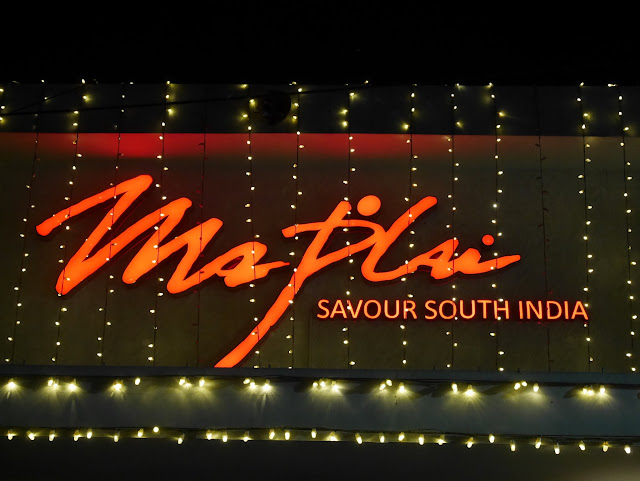 To start, I ordered one of my favorites. A bowl of hot, peppery, spicy, thoroughly restorative and delicious, Chicken Rassam or Natu Kozhi Egg Drop Soup. This a soup made with Chicken bones. A bowl of this really gets the gastric juices going. This version, modernized by Maplai, as the name indicates had an Egg Drop. Made sense. I was quite excited; however, I was soon let down. The soup was passable and I could not see evidence of Egg Drop. One of Maplai’s specialty dishes is meatballs, bound in banana fiber and deep fried known as Thanjavur Kair Katti Gola. Sounded very good, so it was ordered. They were decent, nothing to shout about. Another specialty was Dosa with Mutton Chukka. The word “Chukka” means “Boti” i.e. boneless piece of protein be it mutton, chicken or even fish with no gravy. So what we got was thick Dosa, much like an Uttapam, topped with Mutton Chukka. Tasted good, albeit a bit misbalanced. Something was missing; a squeeze of Lime did help it. The waiter recommended the Mutton Biryani which was made with Jeera Samba Rice as opposed to the Chicken Biryani made with Basmati. Obviously The Mutton Biryani was what we ordered. Have a look here to figure out what Jeera Samba Rice is. The Biryani one again missed something. Unfortunately this ended up being a sub-par meal. We were underwhelmed. It seems the focus is not necessarily food but more marketing. Pity, and alas we came away the losers. 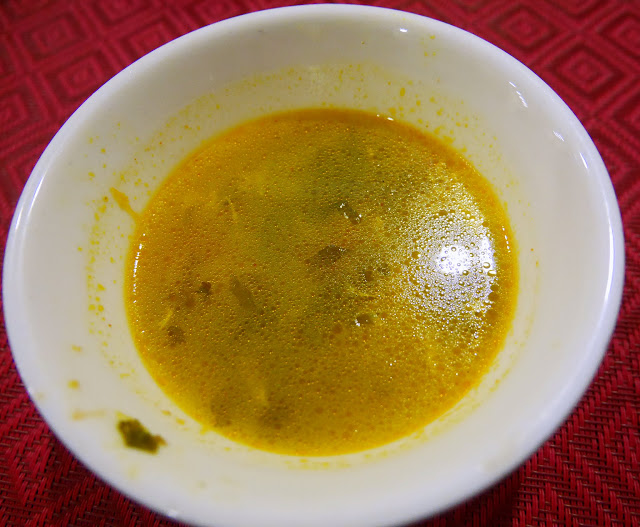 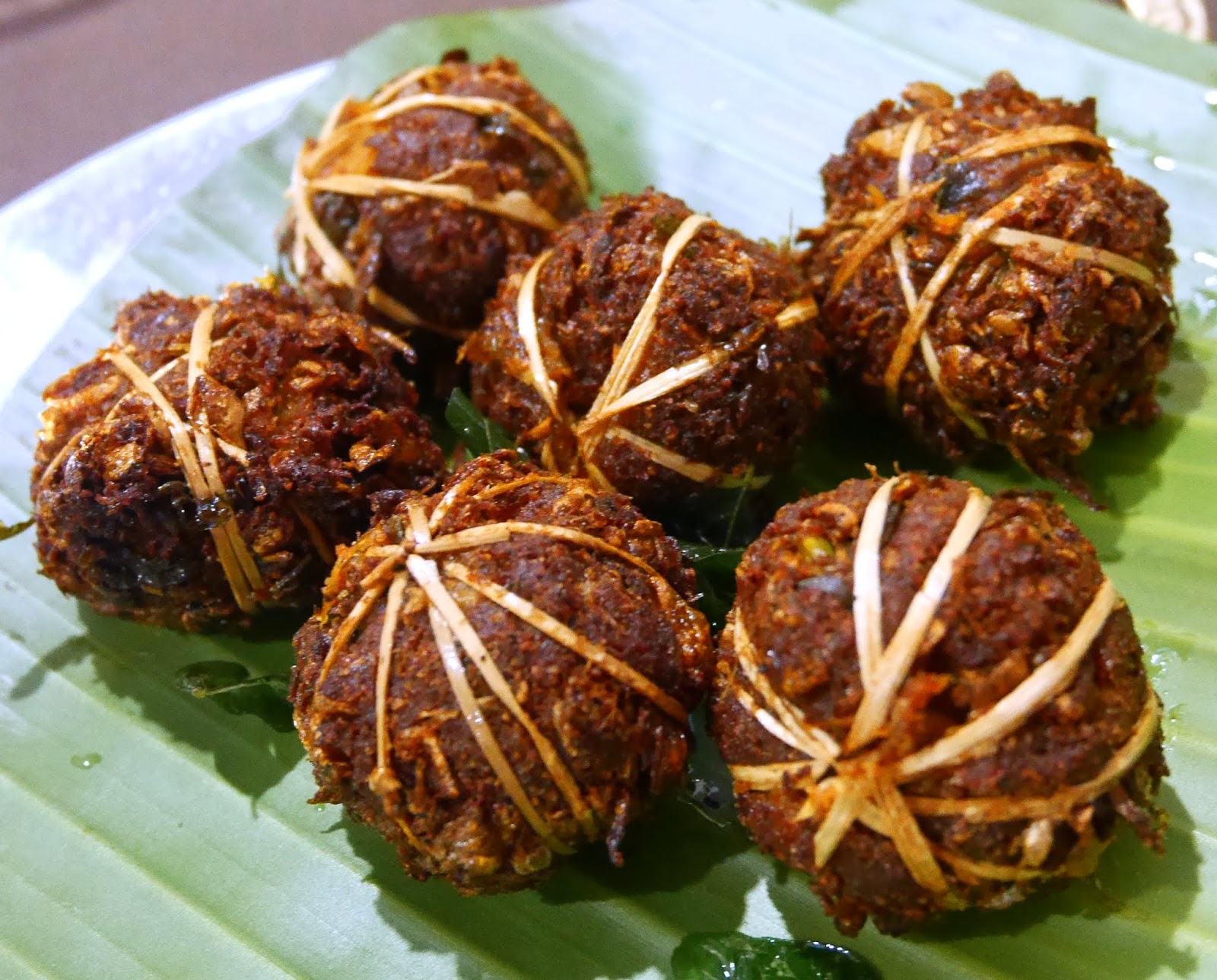 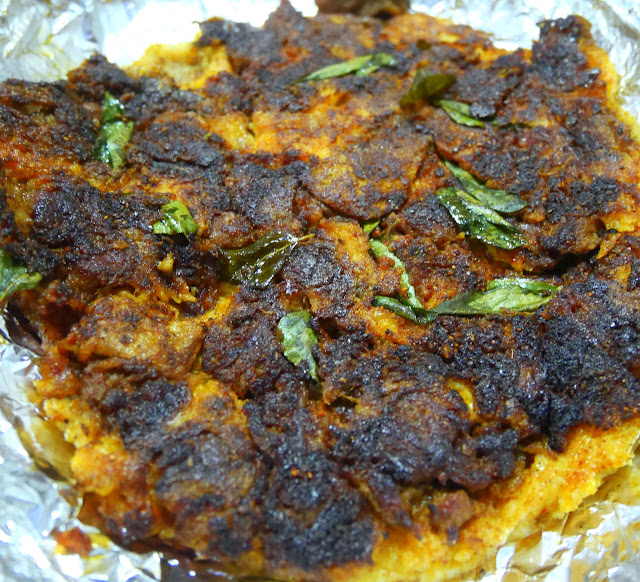 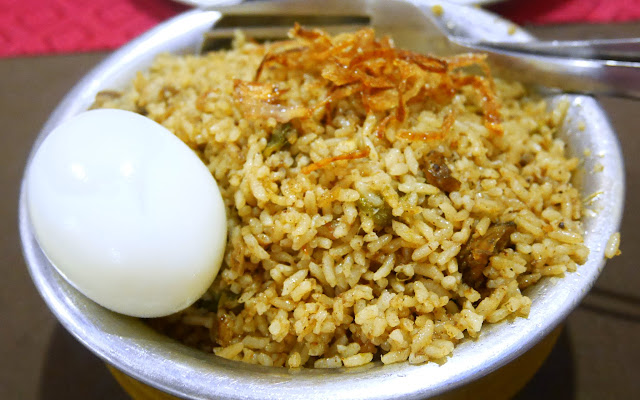 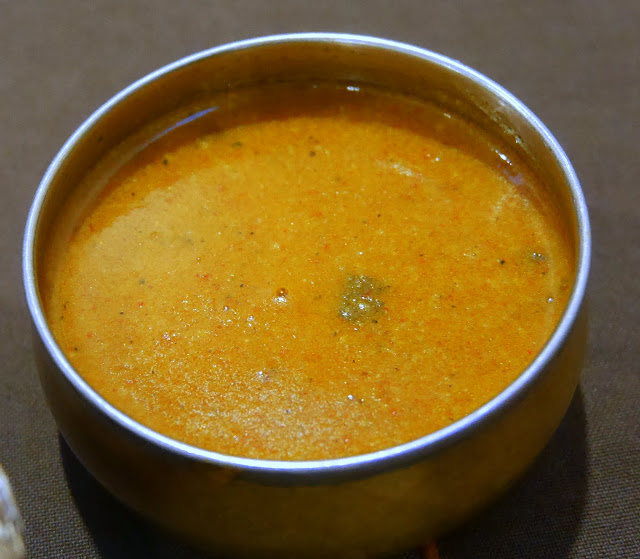 Curry to accompany the Biryani

The next night we were all set to dine at Junior Kupanna, a place recommended by or friend Chef Taranjit of the Peshawri, who is a Tamil speaking “hatta katta” Sardar. Keeps those Dravidians confused. But, you know the cliché, best laid plans and all that. Just as were leaving, fortified by imbibing our favorite intoxicants at Luxury Hours that the Coffee Shop Manager accosted us. She absolutely forbade us from going out for dinner and insisted we eat Chettinad food in house at the Café Mercana. She sat us down, gave us a few more drinks and ordered our dinner. It turns out this was the meal of the trip.

To start we were served Meen Pachamasala. This was a small Pomfret prepared in the same technique as the famous Parsi Patra Ni Macchi. The whole fish is coated in a Green Masala, wrapped in a Banana leaf and steamed. Excellent. The fish itself very good and the whole dish most satisfactory. 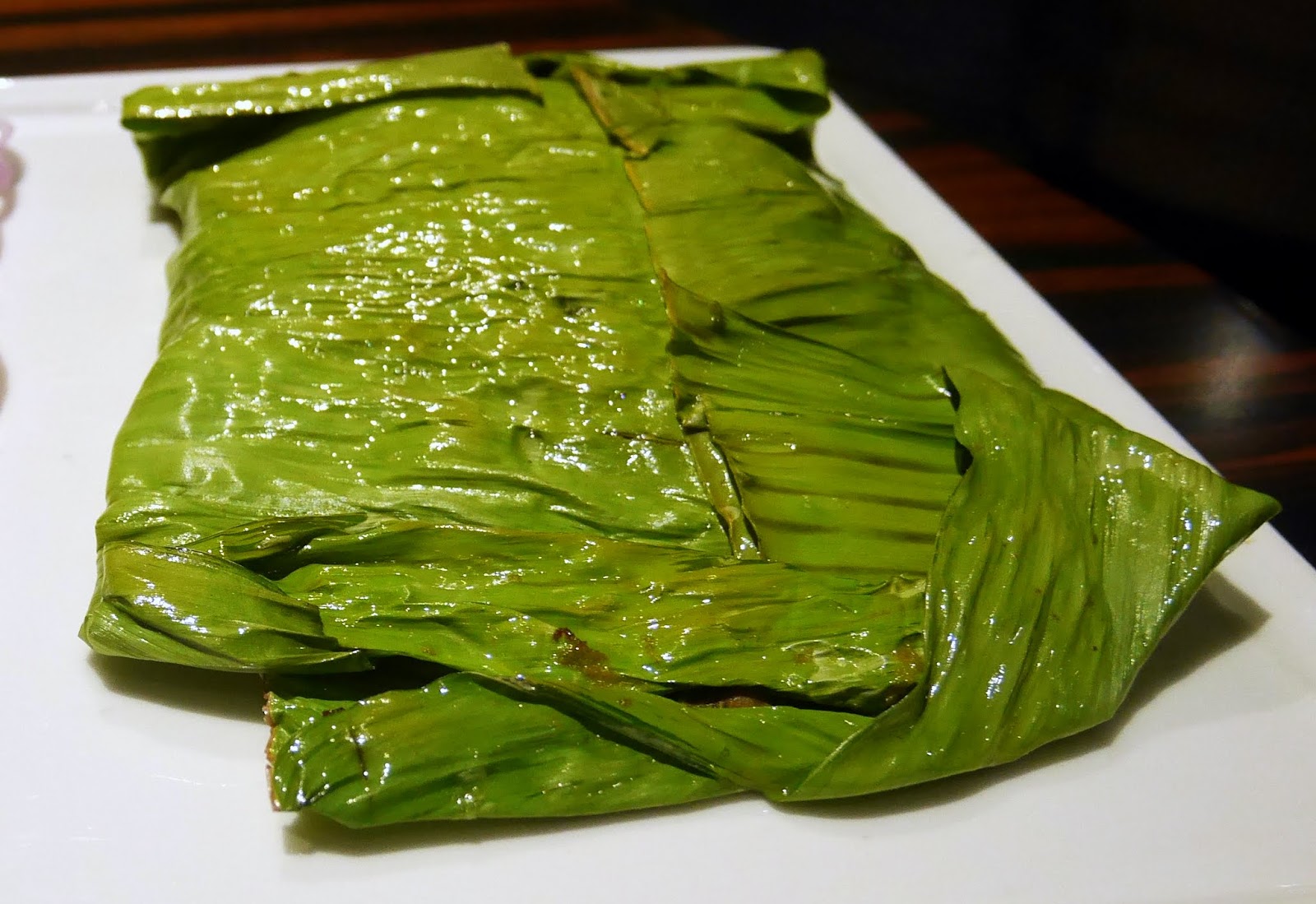 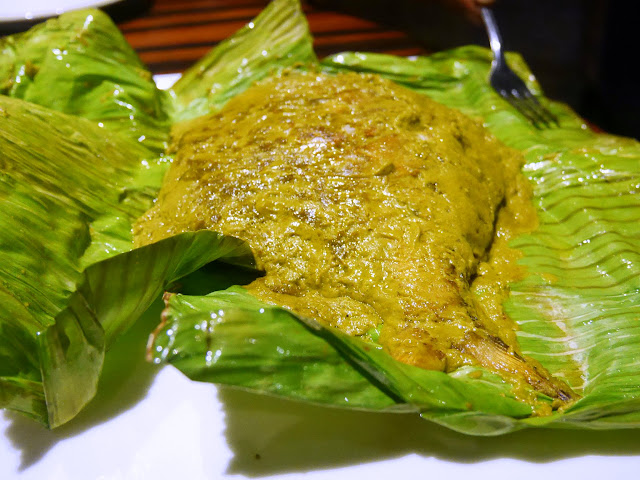 Then came the dish of the whole three days. Kozhi Chettinad. Chicken cooked Chettinad style. Spicy with a healthy dose of roughly crushed Peppercorns. As much as it was delicious, it was Ugly. We ate with our fingers and the aromas of the masala lingered on our fingers till the next morning. 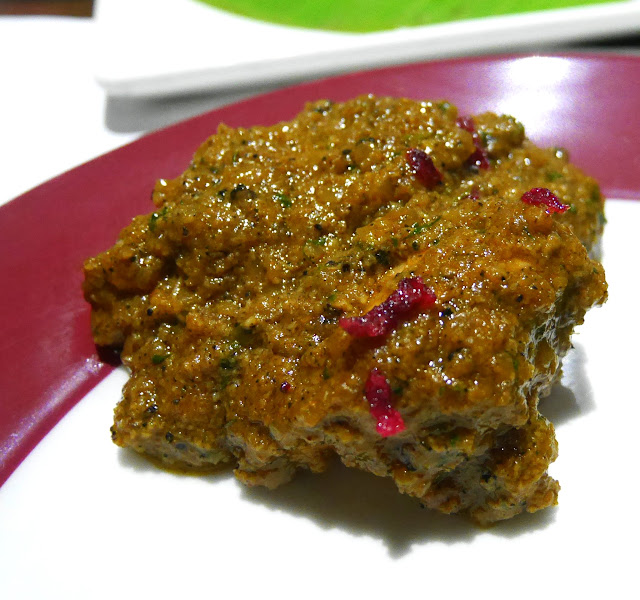 The third dish that she served us was Kaipidi Chops or Mutton Chops in a Green Coriander Curry. Once again, very good, though the Kozhi Chettinad was without doubt superlative. This was accompanied by Malabar Parotha and Iddiappam. After all that spice we had to get ourselves some dessert. There was no way we could have faced the Tamil classic – Payasam. So we walked a few steps to the new Chocolate Lounge/Boutique Fabella in the ITC Grand Chola and had a pastry each. They looked far better than they tasted. 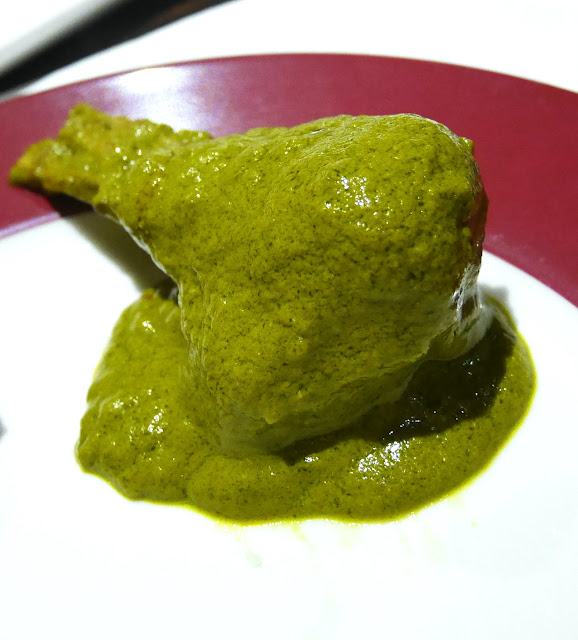 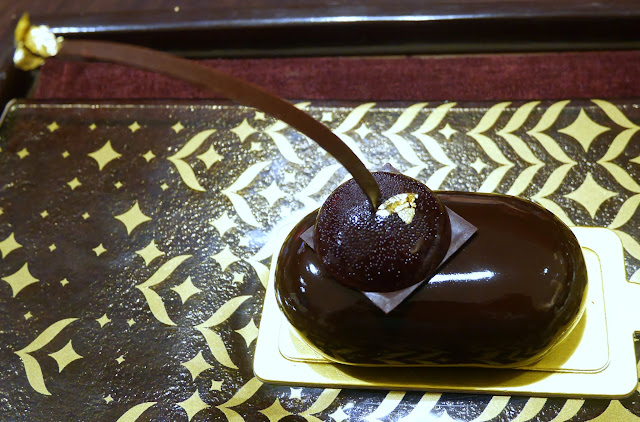 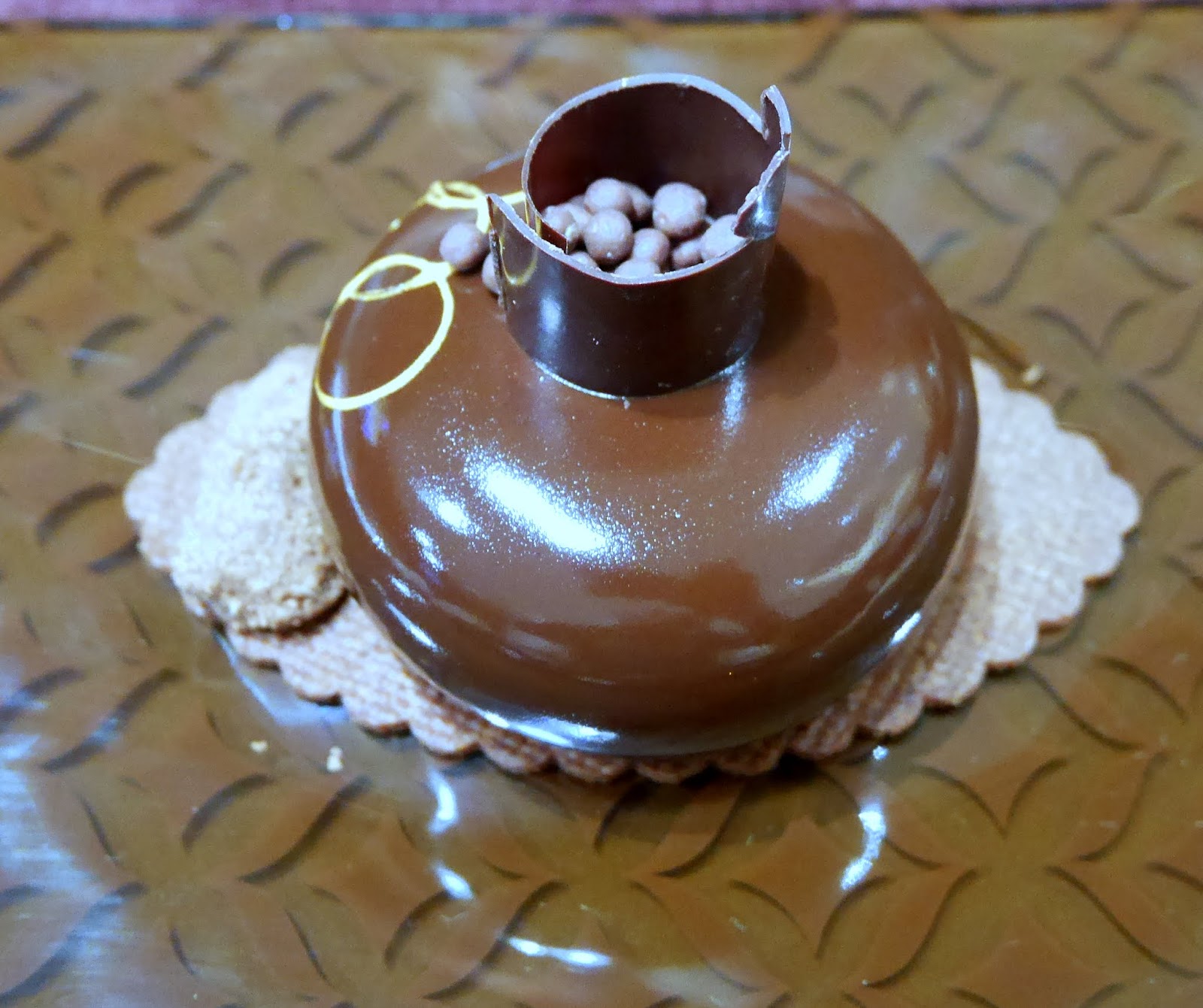 The last meal was at Junior Kupanna, which we had been prevented from going the previous night. We were accompanied by one of HRH the Queen of Kutch’s subjects, a local. This made a big difference. We were seated in a large square, thoroughly unadorned dining room. It was air conditioned, brightly lit with florescent lights, full of hungry Tamilians and their families. Square 4 seater tables, no tablecloths, utilitarian chairs and a banana leaf to serve as your tablemat and plate. Our friend was most unhappy with the leaves and asked for them to be changed. She said they were torn and thus unacceptable. We would never have known. We told her we were hungry, ate everything and requested her to order. 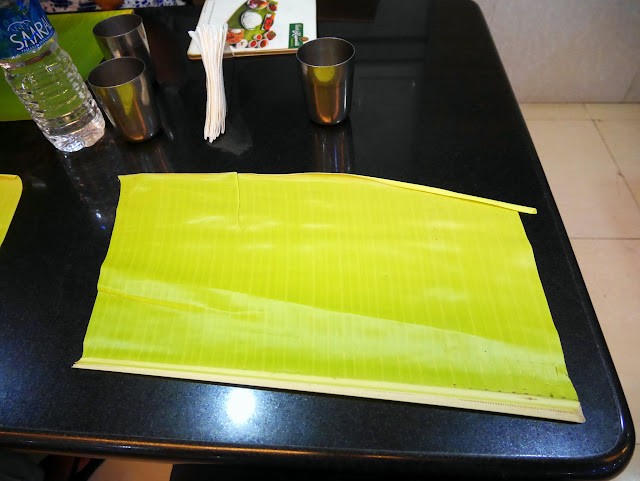 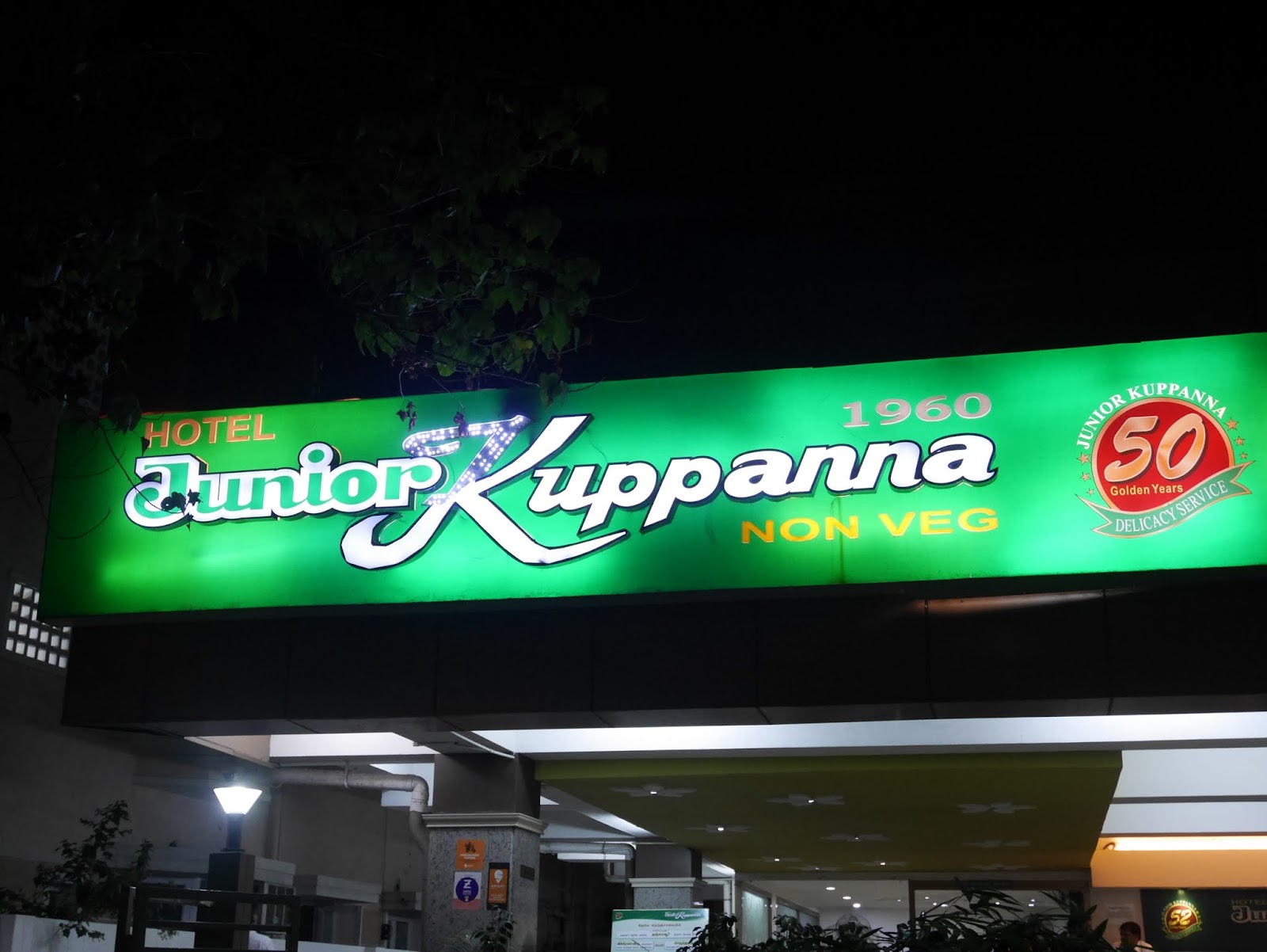 I had just one request – I wanted a good Naatu Kozhi Soup. My wish was fulfilled. Hot and tasty. I drank it from the bowl and was ready to handle the meal. 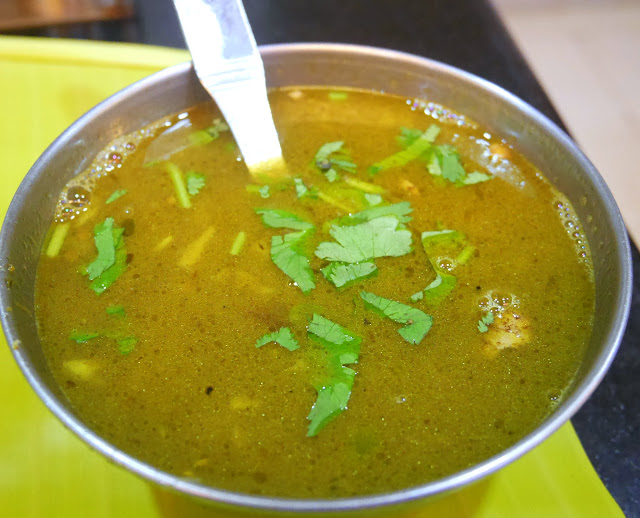 Bowls of Onion Kachumber and a Coconut Curry were brought for each of us. Also one hard cooked egg with a smidgen of curry – to eat with the Biryani - we were informed. First up came 3 Kalakki – one for each of us - which is a cross between a fried egg and an omelet. The egg was mixed and I believe deep fried but yet there was a soft centre. I did not quite understand the point, but this was skillfully cooked and a local favorite probably to be eaten with the spicy food as a bland accompaniment. 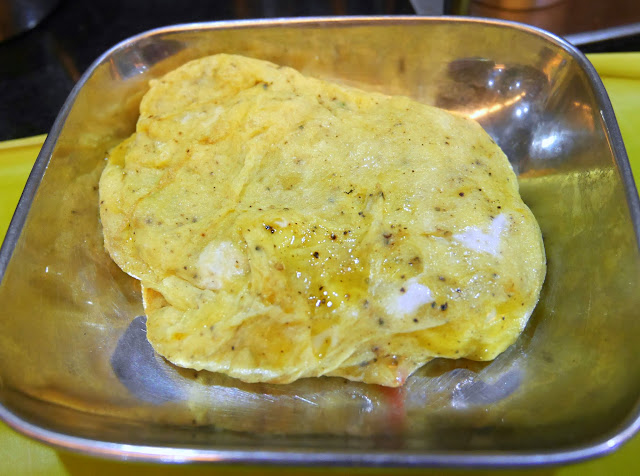 A specialty of the restaurant is a preparation called Pallipalayam which they emphasise is “oil free” with your protein of choice. Ours was Mutton. This was a wonderful dish, and, oil free as promised. Well-cooked Mutton with minimal gravy. A Fish Chukka was ordered which was nice too. These two dishes had small portions as you will see in the photos. An unusual dish was Country Chicken – as opposed to Broiler- that was cooked very well with lower spicing. This is known as Pichu Pota Kozhi. I did not get the deeper chickeny taste of the Country Chicken, but all the same a good dish. To finish the meal a Mutton Biryani with the famous Jeera Samba Rice was ordered as well as Chicken Kotthu Parotta. This is a hotch potch of Chicken, Egg and Paratha and torn into bite sized bits and fried – a sort of deconstructed Baida Roti. This is to be had with the small bowl of Coconut Gravy. The Kotthu Parotta is very popular in Sri Lanka too. 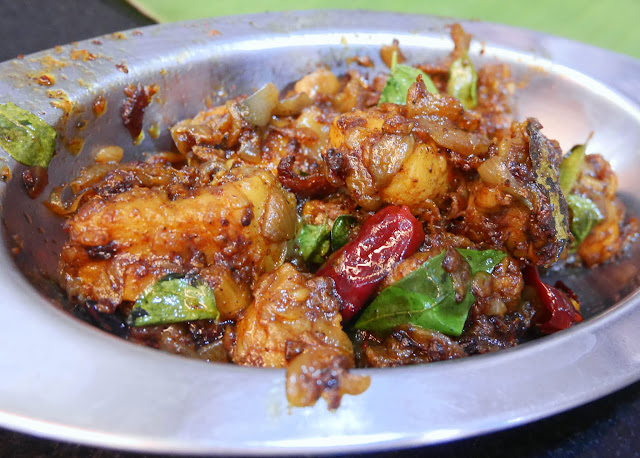 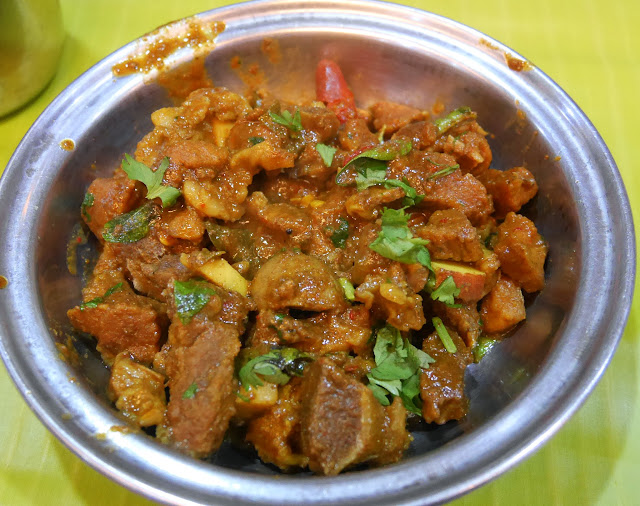 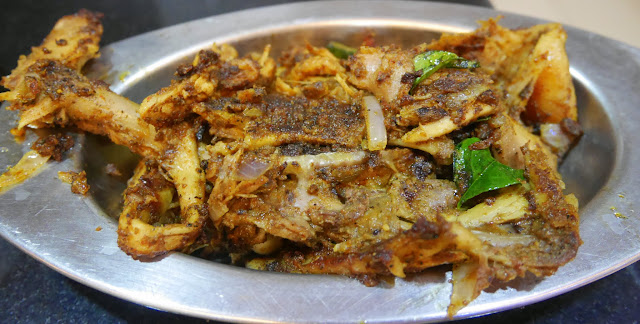 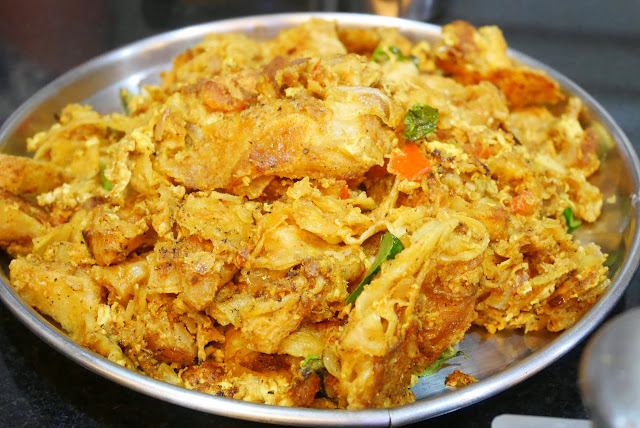 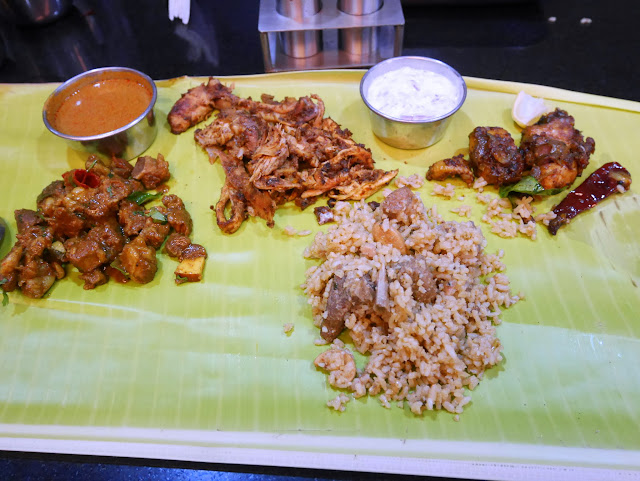 The food was delicious and bloody spicy. I could not stop eating the stuff despite having a mouth on fire, watering eyes and running nose. I needed some cooling down. A “one by two” of Payasam was ordered – relief, cold and sweet, very sweet. This was real Chettinad food. We thoroughly enjoyed our meal. 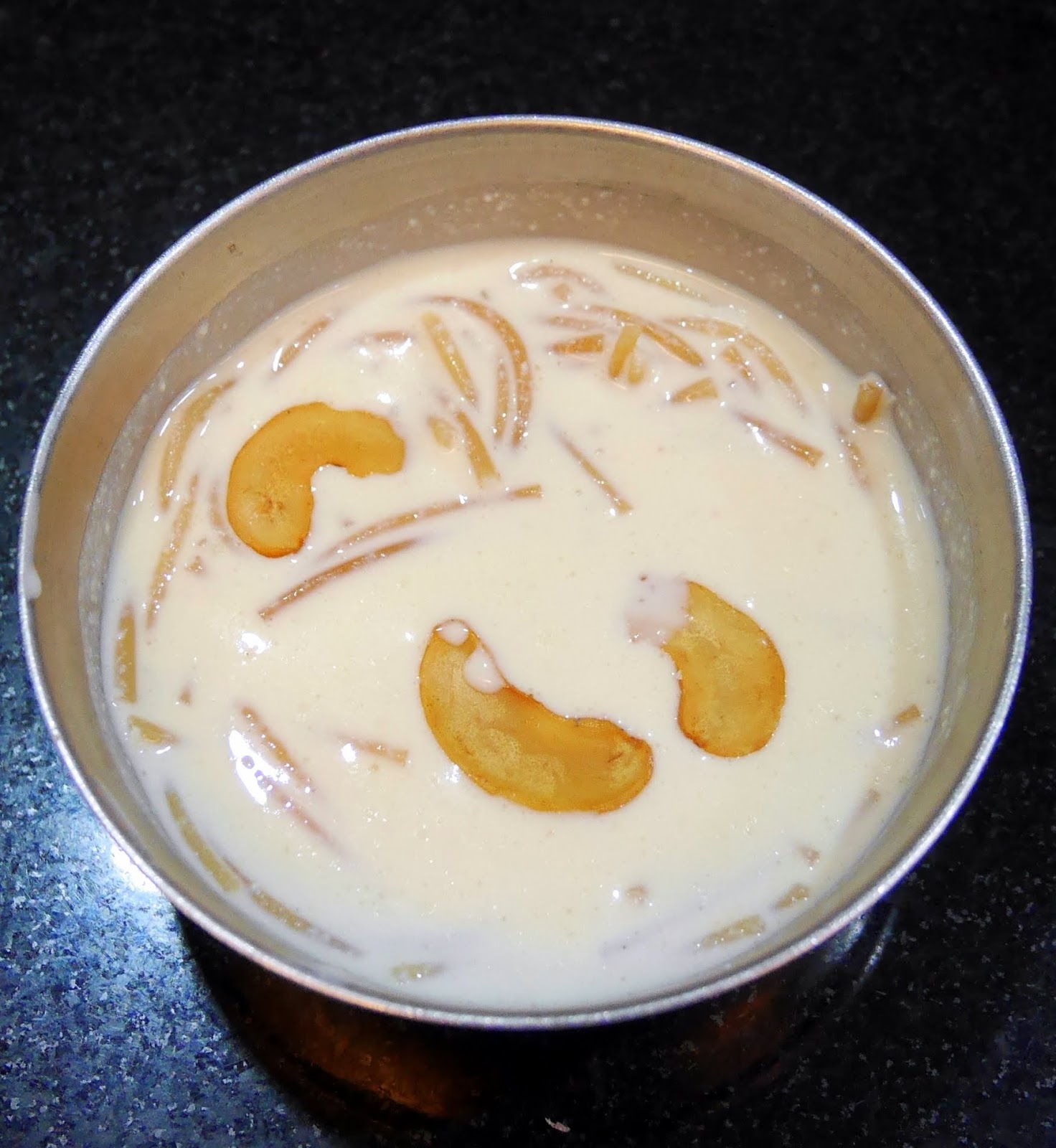 Honestly, the food we ate was all robustly spiced with lots and lots of Kadipatta or Curry Leaf. All of it was served hot. These are such simple things, but alas, finding this in Mumbai is difficult.

I do wholeheartedly recommend that you go to Chennai to have some real food – be it the vegetarian Tiffin or the non-vegetarian Chettinad stuff. This kind of food is impossible to get in Mumbai. Go to the source, go to Chennai.

Posted by Stonethrowers Rants at 8:36 AM