Dinner for four was at St John Hotel. This is Fergus Henderson’s newest outpost. The first choice was the original St John Restaurant in Clerkenwell but that is closed on Sunday so we thought this would be a reasonable substitute. The restaurant is located in the St John Hotel which is newly opened at Leicester Square just behind the W. For me, both are odd locations for an upmarket hotel. After an effusive greeting we were asked if we wanted to sit at the bar before going on for dinner, which offer we foolishly accepted. On going up to the bar we promptly changed our minds, did an about turn and went down to the dining room. The bar was absolutely ordinary and looked and felt like a doctor’s waiting room. No shape, no character, painted in antiseptic white with 3 or 4 two seater sofas. Not a good omen. 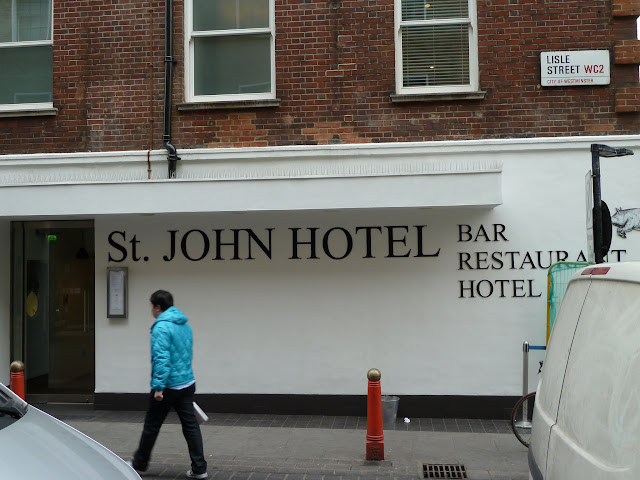 The dining room is also small with an open plan kitchen. Once again white dominates but here the starkness was appealing. A bottle of the house Champagne was ordered to get things rolling. For starters we shared a plate of Devilled Pig Skin which is basically deep fried crackling dusted with some Cayenne Pepper and a dash of Cumin. Very nice. Would have been just right with a cold beer. For our starters we had Salt Brill Croquettes with a Lemon Dill Mayonnaise, Sardines, Cucumber & Coco Beans and Razor Clams, Potato & Sea Purslane. All nice looking but unremarkable and bland.


After a disappointing start we hoped things would pick up. The bottle of Champagne was over and a bottle of medium bodied red from a very short wine list was opened. Decent wine.

For our mains we had Duroc Chop with Chard and Mustard [Duroc being a breed of pig], Roast Lamb, Potato and Green sauce [Lamb served pink], Pot Roast Short Rib, Carrot and Horseradish and lastly Skate, Bread and Brown Shrimp. The Queen loved her Skate, which, I tasted and endorse. My Lamb was unremarkable and bland and the green sauce was more like chutney in consistency. The best part of my dish ironically was the pressed potato. The Pot Roast looked Ok and the Chop looked overcooked. Oh dear!


For puddings we had an order of Custard Tart, top class star of the evening, and Strawberry Trifle once again a par for the course, nice looking but unremarkable and bland.

Service was by an all English wait staff. Very jerky and uneven with long gaps between food. Plates were placed in front of diners haphazardly. Let me explain – if two of us were having the same dish, say, Croquettes and Mayonnaise, you would expect that the plates would be placed in front of the diners with the Croquettes facing the some direction. But this was too much to expect. Lack of training? Lack of caring?

All in all, most disappointing. I could say it was well executed claptrap but I would be wrong. It was actually all nice looking but unremarkable and bland. Pity, it spoilt the evening for me and I think I spoilt it for others.
Posted by Stonethrowers Rants at 10:16 PM