The Game Bird is a 6 month old very highly rated restaurant that had attracted our interest. Our friend the Doctor Businesswoman, whom you have met over the years at Bibendum and Le Gavroche, among others, readily agreed to join us. To make up a quartet Mrs. V [also sister in law of Doctor Businesswoman] who you had met at the Goring Dining Room some years ago, also joined us.

The Game Bird is located in the Stafford Hotel; a small posh hotel in St James’s Place. This is the area behind the Ritz Hotel. A very upmarket and aristocrat part of London. James Durrant is the man behind the British Cuisine served at the Game Bird. James Durrant started life cooking alongside Gordon Ramsay at Restaurant Gordon Ramsay shortly after it had won its 3rd Star in Michelin. In those days Ramsay was manning the kitchens himself. Then Durrant moved to the Maze and subsequently ran a gourmet Pub in Cheshire. The Pub proved financially unviable and Durrant took charge of the Game Bird.

We had a 7.30pm table and Doctor Businesswoman, very aptly and thoughtfully, suggested that we meet at the bar for a drink at 6.30. Excellent suggestion except that the bar was fully packed. So, we were sat at our table with a promise that we would not be given our dinner menus, but would be free to drink till 7.30.

Gin & Tonics for HRH the Queen of Kutch and me and a fascinating and intriguing Chocolate Negroni for Doctor Businesswoman. Conceptually, the Chocolate Negroni was brilliant, the combination of the sweet and bitter from the Chocolate, Campari and Vermouth. The Chocolate came in the form of Mozart Chocolate Liquor from Austria. This was added judicially so the drink was extremely well balanced and not sweet but with the aroma of Chocolate. This was an example of the concept being fully realized. The cocktail was excellent.

Menus were requested and studied. Fascinating and different from other British restaurants we had been to and, not only somewhat old fashioned, as you will see, but also not very fish based. That made sense. The restaurant is the Game Bird so Game and meat would be strong rather than fish. You can have a look at the menu here.

All 4 starters were really good and polished off. I must tell you about the London Particular that I ordered. Fascinating and odd name is it not? There is a reason, so typically British. This is a thick pea and ham soup which was served with Peas, Pea Shoots, Crisp Bacon for texture and a Ham Mousse. The name comes from the “peasouper” fogs that used to hit London in the late 19th and early 20th Century. Delicious soup. An old time dish. 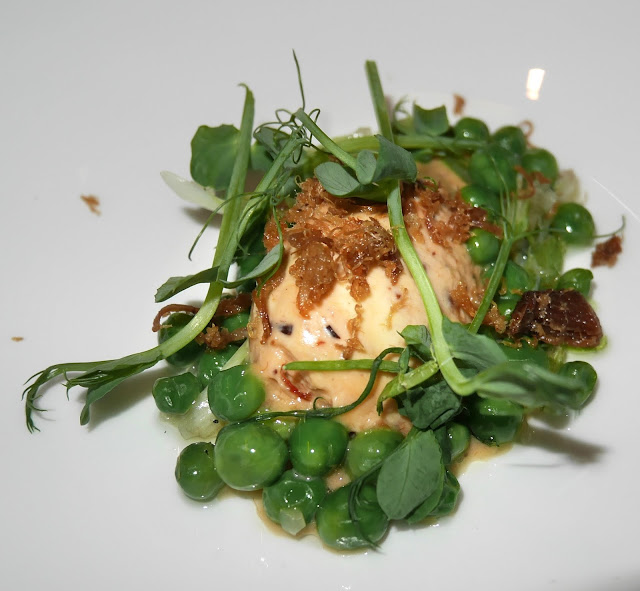 The London Particular - before the Pea Soup was poured in 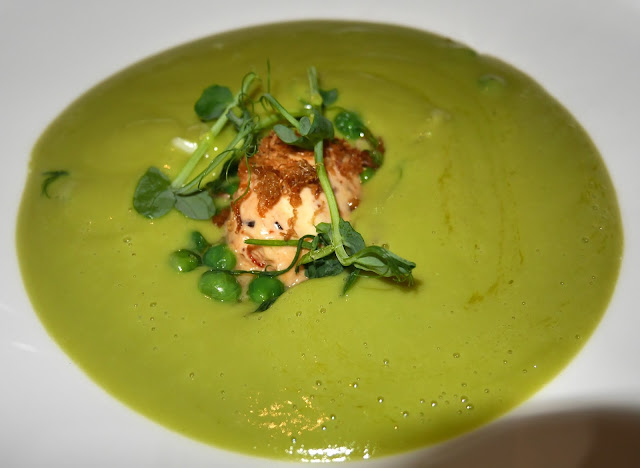 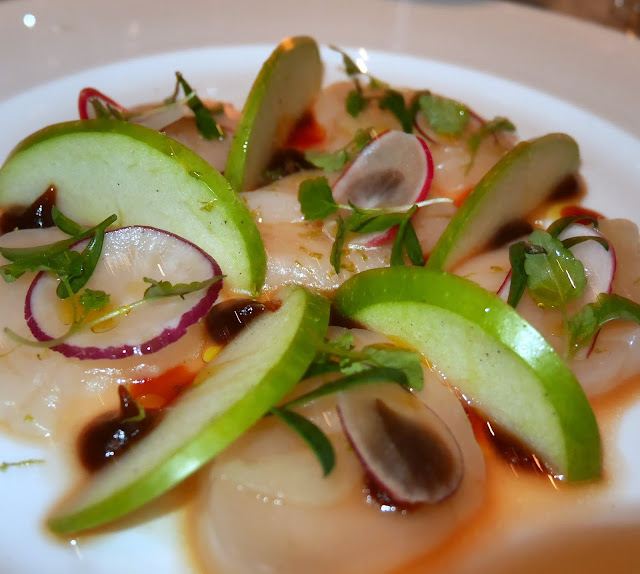 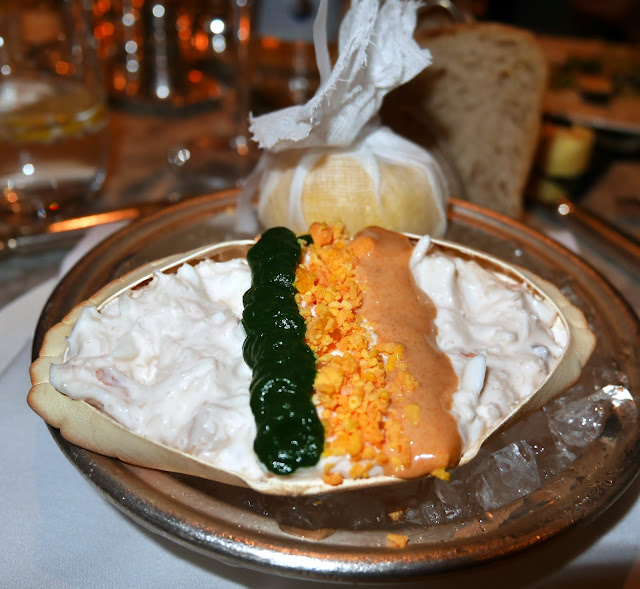 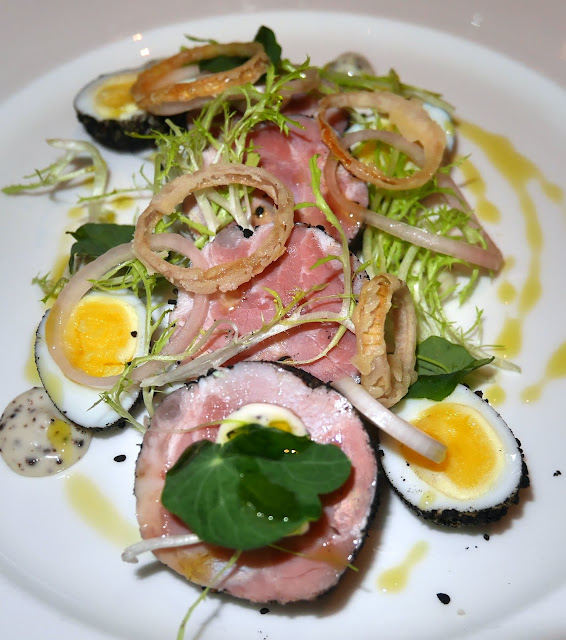 I really do like soups. Think about it, there are some really good soups in our cuisine and it is a shame we do not eat them more often. The often sublime Chinese Hot & Sour Soup, the French Onion Soup, the simple and comforting Tomato or Chicken Soup. What about the Portuguese Caldo Verde or the Bouillabaisse from Marseilles, to name a few.

Starters done with it was time for the mains. On offer, as a special every day is – a Game Bird. It was Pigeon. HRH the Queen of Kutch ordered it, cooked rare and served pink. Mrs. V ordered the Partridge while Doctor Businesswoman ordered the Mallard [Duck]. While writing this I realized that I too ordered a bird – the Chicken Kiev. So here we were, 4 of us, all ordering 4 different birds at the Game Bird. 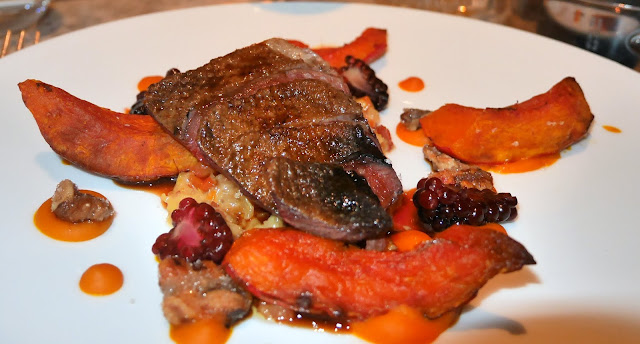 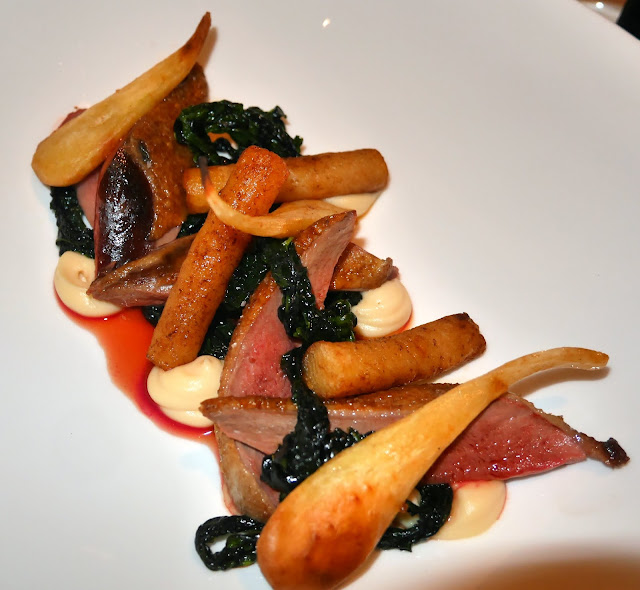 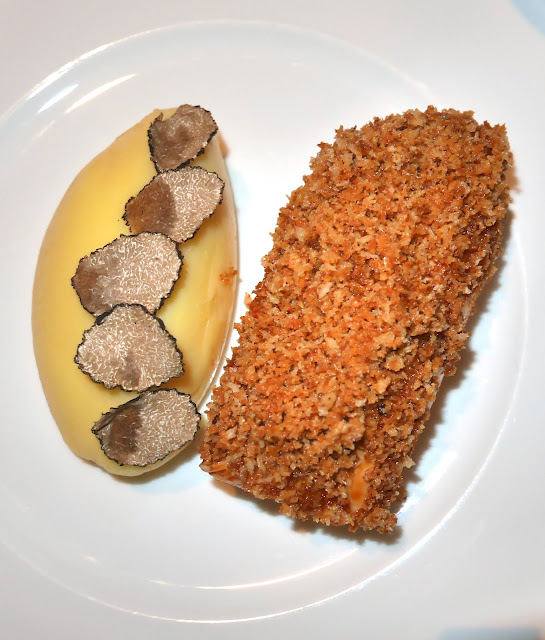 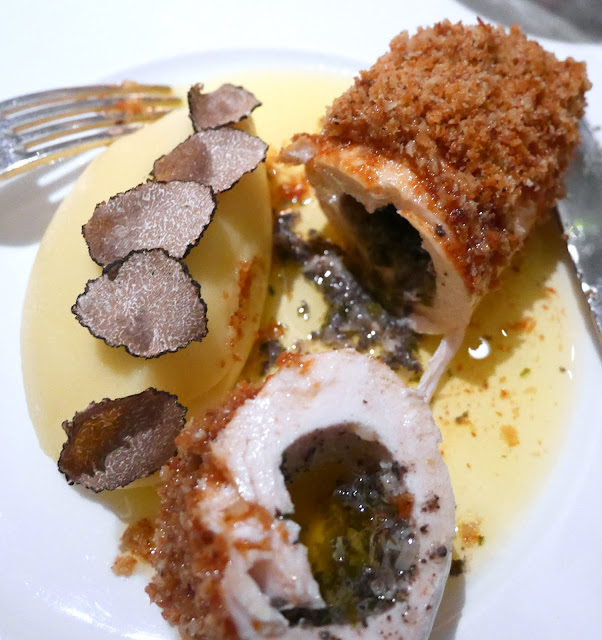 After cutting open the Golden Block, the butter oozes out forming a sauce

For me Chicken Kiev is a dish from my childhood. My mother Senior Stonethrower used to make this dish in the mid-1970s. Looking back, I cannot imagine how difficult this must have been back then. Chicken was a treat and the chicken revolution had not really happened. You certainly did not get as much chicken then as you do now. Butter, an essential ingredient, was a huge luxury. Often butter was simply unavailable. And the thought of using so much oil to deep fry the chicken was terrifying. I recall very vividly the melted butter gushing out of the Chicken when cut. I remember equally vividly the cries of despair when a chicken breast that had been improperly sealed, leaked butter into the oil when being fried. Chicken Kiev is really a brilliant and delicious dish. A Chicken Breast is flattened or hollowed and filled with butter to which garlic and herbs are added, is breaded and deep fried. A key to this dish is engineering, to ensure the chicken completely encases the butter to ensure there is no leakage of the butter when frying. The butter keeps the Chicken moist and forms an automatic sauce. Served with mashed potato and a crisp green salad this is an elegant meal. In the UK Chicken Kiev is still very popular but sold in the supermarket as frozen food ready to eat food. However, it has all but disappeared from fine dining restaurants, hence, another nod to old fashioned dishes. In Mumbai, Gaylord’s still serves Chicken A la Kiev, slightly bastardised by adding Cheese in the stuffing.

The Chicken Kiev at the Game Bird is special. The chicken used is the Norfolk Black Chicken a new good quality chicken breed. This bird has black feathers, grown free range and above all else, is bred to taste incredible with moist and succulent meat. With a chicken of this quality, cooked with skill and excellent engineering to prevent leaks, you have a winner on your hands. The Kiev appears as a golden block on the plate and you are given special bib to prevent the hot butter spraying onto your clothes. This was really a good dish. I do hope Senior Stonethrower comes to London to eat gold standard Chicken Kiev. Sigh! 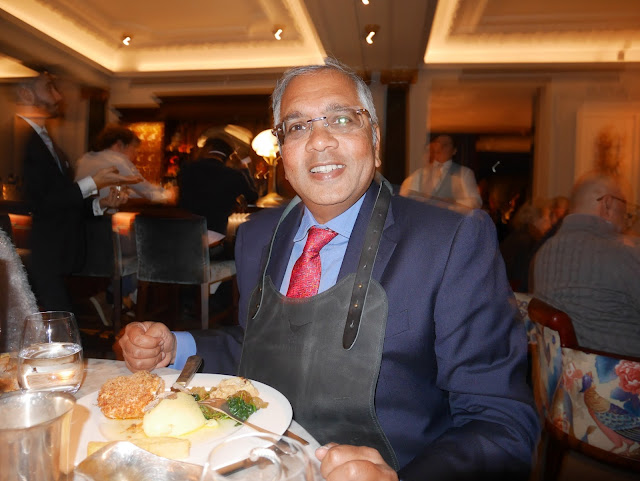 Me with my Bib

Two desserts were requested a Pistachio Soufflé and Lemon Meringue Parfait. These were not exceptional but decent. 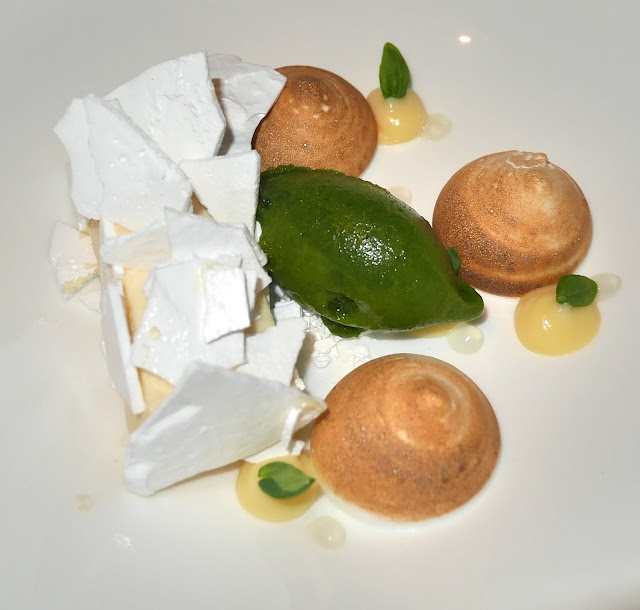 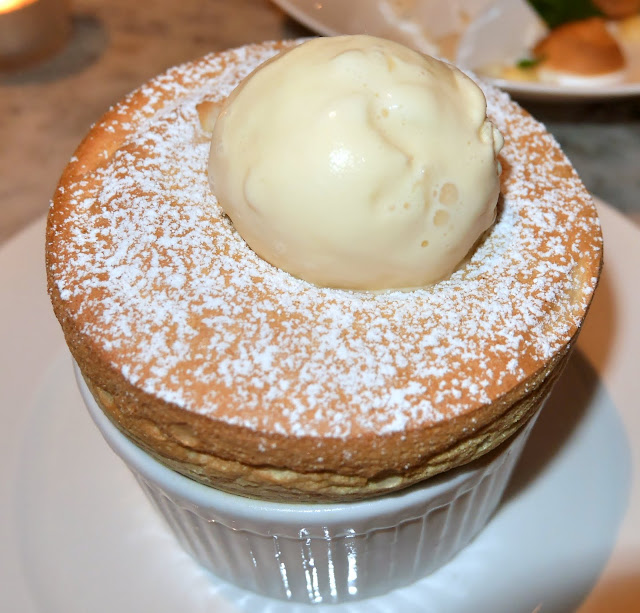 The Game Bird is a really lovely restaurant. There is so much on the menu that is there to eat. I am sure we will be back here. I do recommend it strongly if you are in London. This was a good meal.

Posted by Stonethrowers Rants at 7:49 AM