Alain Ducasse at the Dorchester - London

Alain Ducasse is a giant. He is not Britain centric. His domain is France and Monaco with outposts in Hong Kong, Japan and the USA. He presently holds 21 Michelin Stars. When I was at the Le Cordon Bleu one of my instructing chefs Franck Jeandon had worked for Alain Ducasse in New York. I asked Chef Franck what made Alain Ducasse so great. The answer was, and I quote `Ducasse will look at a carrot and think, how much money can I make with this.’ This was not to suggest that Ducasse was a mercenary, but the answer was far deeper, it showed how intense the skill of this man was, that he could cook a humble vegetable in such a fantastic manner that a cynical punter would pay money to eat it. Ducassse style of cooking is still classical, he has no foams, jellies and chemicals, just good old recognisable food skilfully crafted, and beautifully cooked. Neither me nor the Queen are fans of the Heston Blumenthal type of molecular gastronomy cooking. Real food any day for us.

There are only four restaurants that have 3 Michelin stars in the UK. Alain Roux’s wonderful Waterside Inn at Bray, Blumenthal’s fantasy food Fat Duck also at Bray, Gordon Ramsay's delightful Royal Hospital Road and Alain Ducasse at the Dorchester.

We had a rather early 6.45pm table, but we were willing to have an early diner for the pleasure of eating at the restaurant. The day was very rainy but luckily it cleared up so we did not have to carry our umbrellas to the restaurant. The restaurant is part of the Dorchester Hotel, which is, in my opinion, not the greatest location to have such a high end restaurant. The character of the Hotel with its processes, staffing and image are often at odds with or compromise the independence and freedom of an individual restaurant. But, I stress, this is my opinion, I may be wrong. 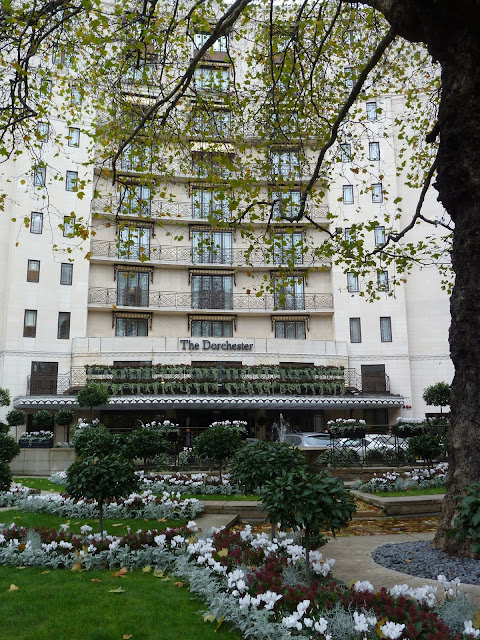 The Restaurant itself is pleasantly appointed and ticks all the boxes necessary, sliver cutlery – check, multiple menus – check, a tasting menu – check, a footstool for the ladies to keep their purses – check, French staff – check, extensive wine list – check, high staff ratio – check. The boxes not ticked, menus without prices for the hosts – missing, coats whisked away on your entry and miraculously reappearing on your exit – missing. The restaurant is located in the middle of a long passage that serves as a lobby that is the sort of spine of the Hotel. It was a bit disconcerting to walk thru the very busy, albeit very glamorous lobby to get to the restaurant. Our coats were taken and we were soon seated and handed 3 menus. One contained the A La Carte and Tasting Menu, the other was a special Autumn Menu and the third was the Wine list. The menus were explained to us and after that one of the senior captains came across with a wooden box looking like a Humidor which had inside a few White Truffles. On opening the box you got the intoxicating aroma of Truffles. We decided on the A La Carte. Since it is Truffle season as I have been writing, the Restaurant had a special; you could order 3 grams of the White Truffle to be shaved on your food. Mind you this was not like Tabasco where you could add a few drops on anything and everything, only a few of the A La Carte dishes could take the Truffle. We chose our food and wine and enjoyed the glass of Champagne while the food arrived. With our Champagne we got a mound of some utterly delicious Gruyere Gougeres. 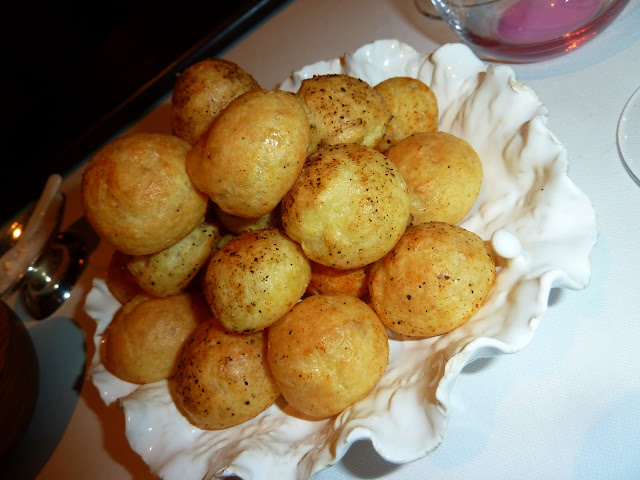 Before the first course we got an Amuse Bouche. Reasonably simple. Finely cur Granny Smith Apple [correct word was Brunoise of Granny Smith] with a Quenelle of Cream, Toasted Pine Nuts and a Parsnip Veloute. A good combination. Just got the gastric juices flowing. 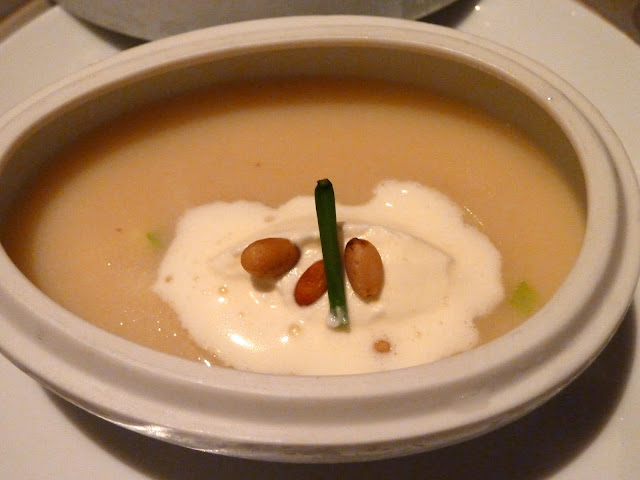 For our first course HRH the Queen of Kutch ordered “Sauté Gourmand” of Lobster which was served with Truffled Chicken Quenelles and homemade Pasta. This was pronounced as being really good. You got medallions of Lobster tail sautéed, some tubes of Pasta and delicious chicken Mousse in a Quenelle. This was topped with a Nantua Sauce which is made using white sauce flavoured with roasted lobster shells. Just looking at the dish makes you want to eat it. 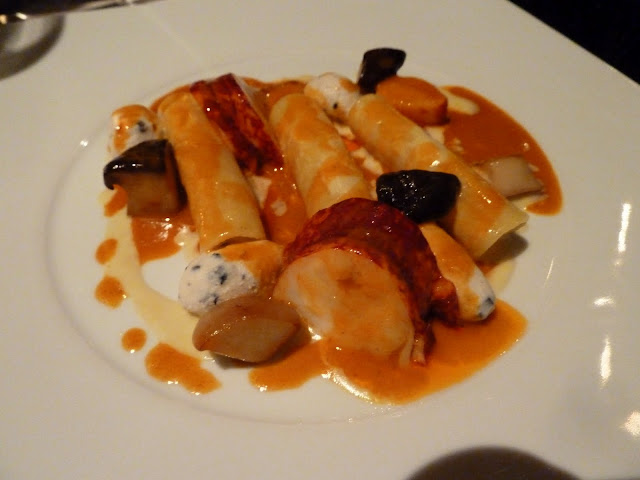 I ordered an Alain Ducasse creation, a dish invented by him the Cookpot of British Terroir vegetables Girolles and Montgomery Cheddar. Since we were in Britain the Cookpot consisted of British vegetable. In his other locations, vegetables and a cheese of that location are used to make the Cookpot. This dish was a stunner. It was totally vegetarian. At the bottom were some Girolle mushrooms as well as some simple Mushroom Duxelle [Mushrooms chopped, Shallot, Parsley all cooked together] Also in the Cookpot were roasted Butternut Squash and Roasted Apple and an assortment of leafy vegetables topped with some Cheddar. The whole pot is sealed with Puff Pastry and cooked. The dish was totally delicious, healthy and every morsel perfectly seasoned and cooked. 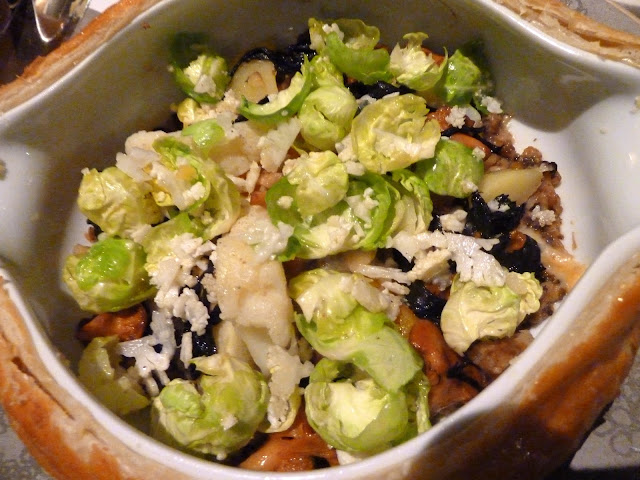 Four our mains we had both requested that White Truffle be added. HRH the Queen of Kutch ordered Hand-dived Sea Scallops, Parsnips, Jerusalem Artichokes and Fried Salsify. The dish also had some Parsnip cooked in Balsamic Vinegar. The Scallops were huge. I had not seen such large Scallops ever! They were perfectly cooked, seared on the outside and just underdone in the centre. The sweetness of the Scallops was quite something. The crunch of the Salsify Chips gave an interesting contrast. The Truffle shaved on top made the dish extra special. A great dish once again. 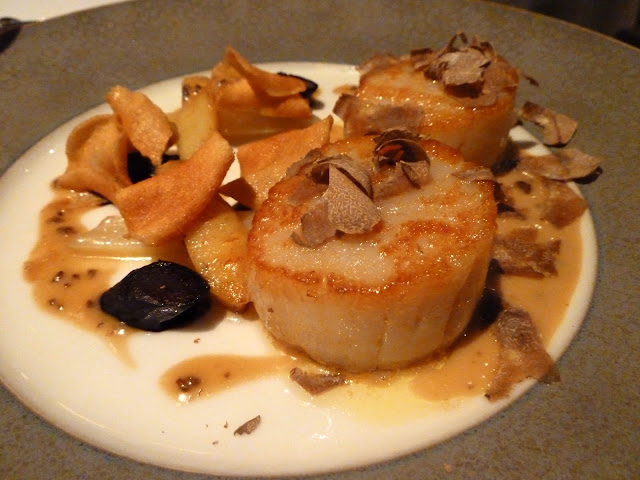 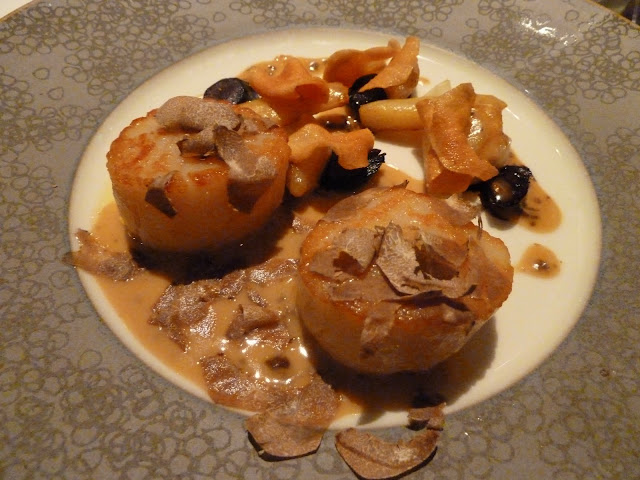 I ordered Veal Loin, Girolles and Culatello with fresh Almonds and a Veal Jus. Girolles are once again on the plate simply because its Autumn, mushrooms are everywhere and every restaurant wants to serve them. Culatello is the best part of a Parma Ham. Once the Captain shaved the Truffle on top the heat from the meat and vegetables hit the Truffle causing a release of even more aroma. The dish was incredible. The extreme savouriness of the sauce was accentuated by the Truffles. The vegetables accompanying the Veal were also expertly cooked. Look at the vivid colour of the carrot and the lettuce. This was skilful and caring cooking. 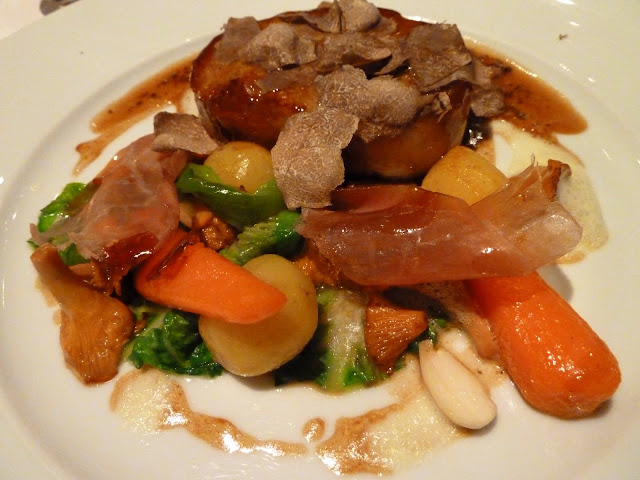 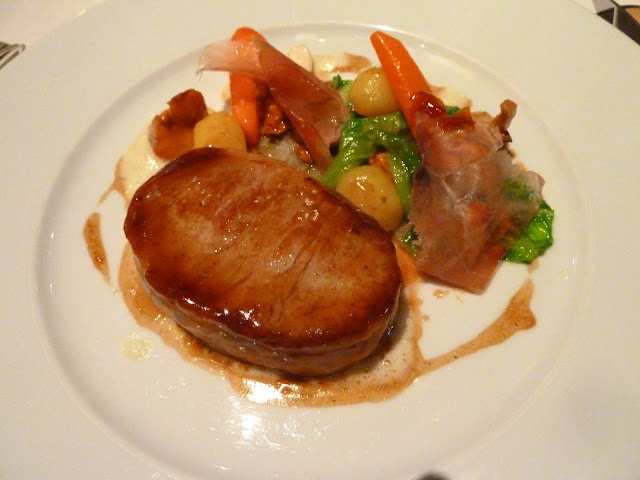 Then it was time for dessert. Rum Baba is another of Alain Ducasse signature dishes. A Rum Baba is very rich yeast cake. It’s richer than a Brioche. The cake is normally a 2-3 inch cylinder and is served with whipped cream. The cake itself is doused in Rum. To make it special, a tray with 5 different rums is brought out by the Sommelier. The rums range from a very fresh smelling white to richer, spicier and denser dark rums. I chose mellow dark Rum from Cuba. The Rum Baba arrived, was cut open whipped cream spooned on and the rum poured. I had a spoonful and nearly fainted with pleasure. It was gorgeous, luscious, spongy and rich all at the same time. 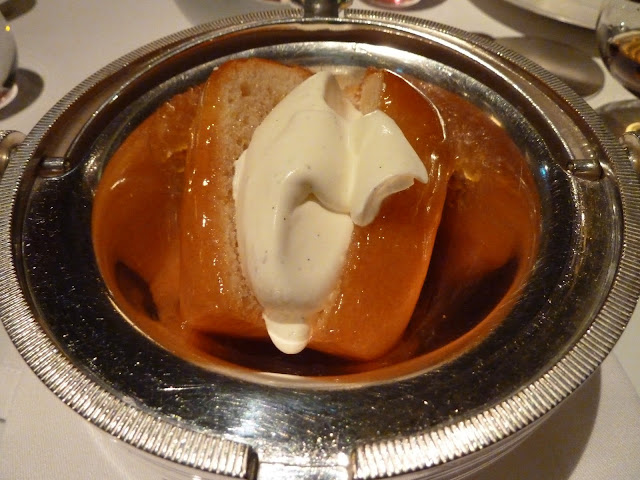 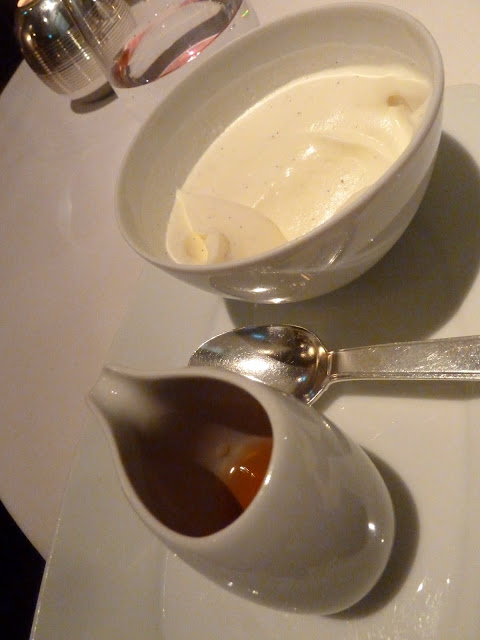 HRH the Queen of Kutch ordered a Praline-Chocolate biscuit with Vanilla ice cream. The biscuit was outstanding. It had what I thought was Cassonade sugar which is a sort of crystallised brown sugar used in French baking. It’s extremely brittle and shatters in the mouth.  Really very good. The Vanilla ice cream was ordinary in comparison. 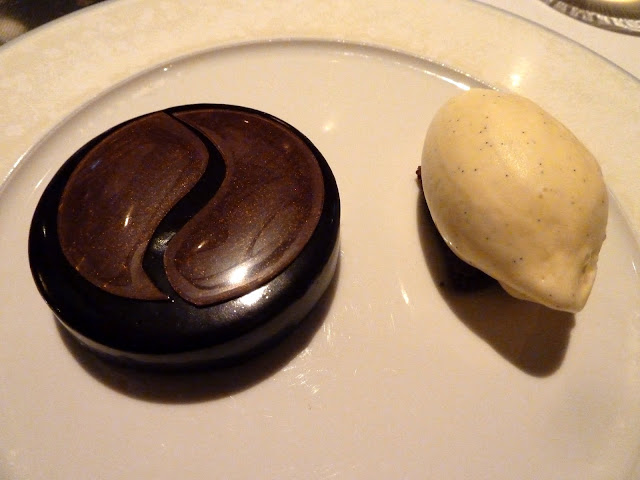 As if all this sugar was not enough we got some Petit Fours. This consisted of two types of Chocolate, milk and bitter and 6 Macaroons. The chocolates were good but the Macaroons were much better that what we have eaten from Laudree and Pierre Herme. I believe the reason for that is the fact that these Macaroons are probably fresher and the moisture has not affected them as much. 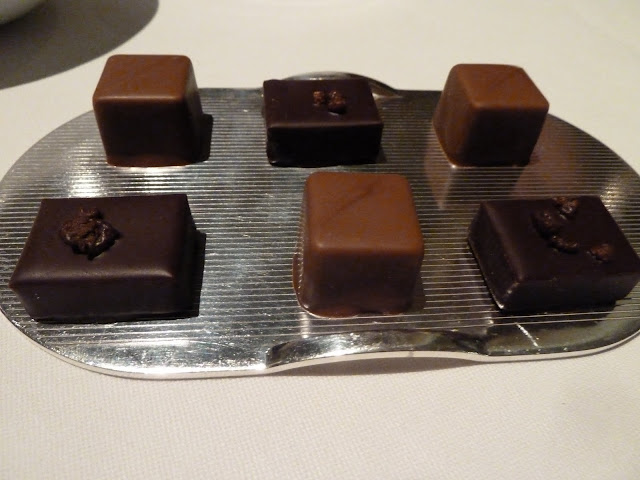 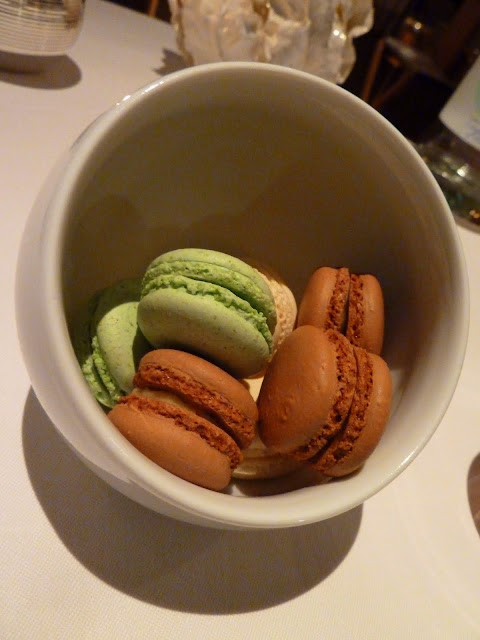 Thus ended a fabulous meal. The food was top notch. The service was below the standards of the food. It was erratic. There were so many occasions when the bus boys brought out hot food from the kitchen only to find no empty table to set down the tray or to find that there were no waiters to serve the food. Empty plates sat on the diner’s tables for quite an inordinate time before being cleared. The service had no particular discernible system and certainly no charm. Being one of just four 3 star Michelin restaurants in the UK did this experience feel at all special and extraordinary? Unfortunately not, while the food was really good the rest of the elements did not add up. When leaving, the hostess took us along the long length of the lobby across to the other side to retrieve our coats. Why could the coat cupboard not be closer to the restaurant? Was this a constraint of the hotel in which the restaurant was located? Did the blandness and extreme obsequiousness that Hotels have overwhelm the character of this Restaurant? I think yes. But I will never know the correct answer, as it is very unlikely that we are going back.

Posted by Stonethrowers Rants at 4:00 PM