The potato is the 4th largest food crop. Corn, wheat and rice surpass potato. It is believed that the potato was introduced to Europe by Spanish sailors returning from South America. The Portuguese introduced “Batata” to India. In Ireland, the Potato Famine, it is said, totally changed the country;s demographic, political and economic landscape. Potato is beloved all over the world. For us in India, with are very carb heavy diet, potato is most often an ingredient, often masquerading as a “vegetable” despite the potato having poor nutritional value.

We had eaten Clare’s food at Restaurant Gordon Ramsay several times. We were quite eager to dine at Core, so a reservation was made. We had an early 6.30 pm reservation on a glorious summer day in London.

The restaurant is in a predominantly residential area. You enter through a bar, which was empty and are led inside past an “open” kitchen. The Chefs greet you as you are escorted to your table. I used the word “open” as the kitchen is not really open but, is fronted by floor to ceiling plate glass, giving you unrestricted viewing.

The dining room seats about 55 people at a time, and got 90% full pretty soon. The room is bright with wooden flooring and minimal carpeting. Blond wood, creams and light brown are the colours used. No tablecloths, but some sort of slight padding covers the tables, somewhat like the upholstery on dashboards of expensive cars, you know what I mean, padded leather. A small footstool for ladies to perch their expensive purses. Music plays softly, I could hear the distinctive sound of Stevie Ray Vaughn’s guitar in David Bowie’s Let’s Dance. Cutlery was good quality stainless steel.

You have 3 menus, a 7-course classic tasting, a 7-course seasonal tasting and a 3 course A La Carte. The menus were on a 3-fold card not the traditional leather-bound folder. The wine list was the traditional leather-bound tome. We opted for the 3 course A La Carte. A gin and tonic to start with and a Sancerre to drink with our meal. We were subjected to the usual question; do you have any allergies? Nope, we eat everything.

Once the drinks arrived and we had our first sips, up came Canapes. Smoked Eel with Dashi Jelly, Parsley and Nori on which Eel vinegar was sprayed with a sort of perfume bottle. A slightly disappointing Smoked Duck wing with burnt Orange served under a glass jar. This was similar to what Smyth served at Restaurant Gordon Ramsay. Disappointing because the wing could have/should have been crisp, but was instead flabby. A brilliant Parmesan Gougeres with Pea and Mint which was truly astounding. However, the best of all was a Foie Gras tartlet with Madeira Jelly. This was stunning. 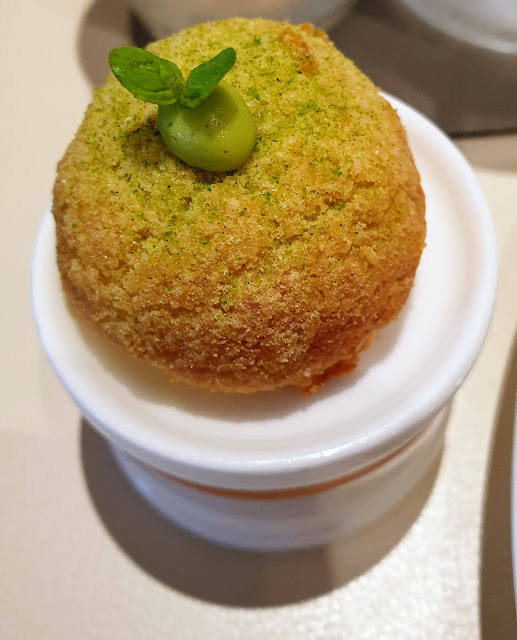 Parmesan Gougeres with Pea and Mint 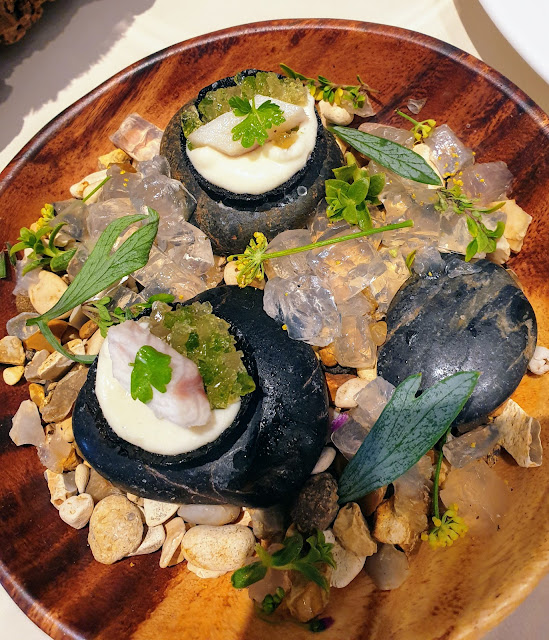 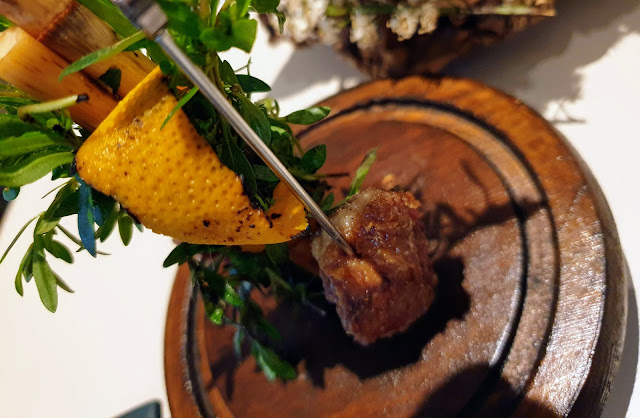 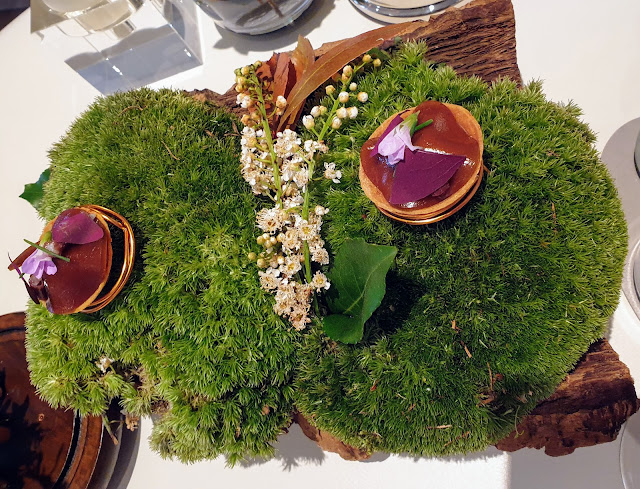 One of the signature dishes at Core is “Potato and Roe”, what with Clare Smyth’s Irish background. This is what I had as my first course. A Charlotte Potato is cooked very skillfully, with its skin. This is served with a Dulse [seaweed] Beurre Blanc [White Wine and Butter sauce]. The Potato is garnished with Herring and Trout Roe and fermented potato chips. These chips mimic the classic Salt and Vinegar wafers that are so popular in the UK. This looked great, but, alas, it was simply a dolled-up potato. Probably the best cooked, potato tasting potato that I have eaten; however, nothing could detract the fact that ultimately it was a potato. 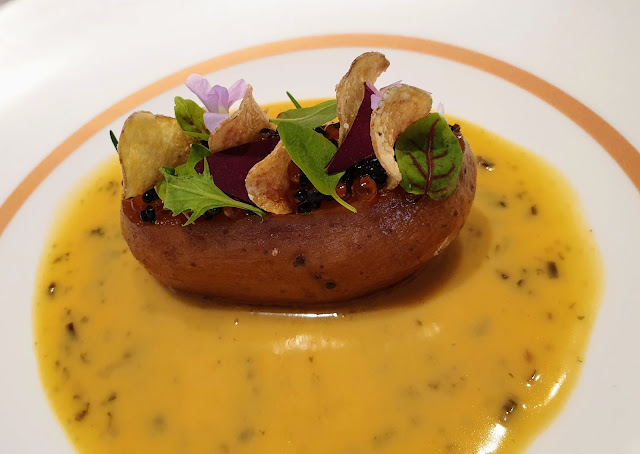 HRH the Queen of Kutch had a butter poached Langoustine with Veal Sweetbread. This was garnished with Fennel Puree and served with two sauces, Vin Jaune and a Lobster Bisque. Vin Jaune is a yellow Sherry type wine from Spain. This was a good dish. 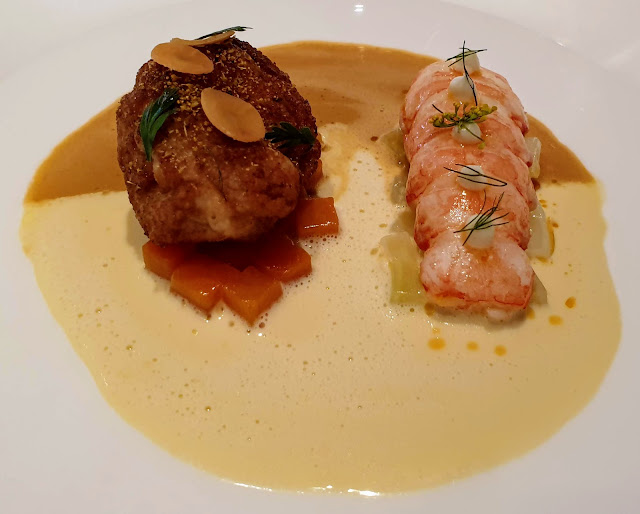 One peculiarity was that on all tables, including ours, a young Chef, in full whites, appropriately stained, with tattoos was pulled out of the kitchen to serve us the starter and explain what it was. I found this idiosyncratic. This seemed to happen only for the first course, not any other. When I first saw the Chef come out at an adjoining table, my though was there was a complaint about the food. I know that this is the style in Scandinavia, but here it seemed to jar. Pulling the Chef out of a kitchen cannot be helping the smooth flow of the kitchen. The Chef’s are sweaty and their whites stand out among the dark suited waitstaff. What would the Chefs tell diners that waitstaff could not? I just did not imagine!.

Main courses were Roast Monkfish, Morecambe Bay Shrimps, Swiss Chard, Brown Butter, a thin slice of Brown Bread with a Brown Bread Sauce for me. Really good. HRH the Queen of Kutch had the exquisite Duck with Red Grapes. This dish consisted of a artfully cut Duck Breast served alongside Duck Liver garnished with Grapes. On this a Nepalese pepper called Timut was ground. Timut Pepper has citrussy notes and you could call it a cousin of Triphala and Sichuan Peppercorns.  Please do have a look at the skill in slicing each grape and arranging it on top of the pastry containing Duck Liver. Duck and Grape being a classic combination, a sweet/tart fruit with game. The Manager told us that one Chef [obviously a newbie] has the job of hand slicing grapes. Once again, this dish was excellent. 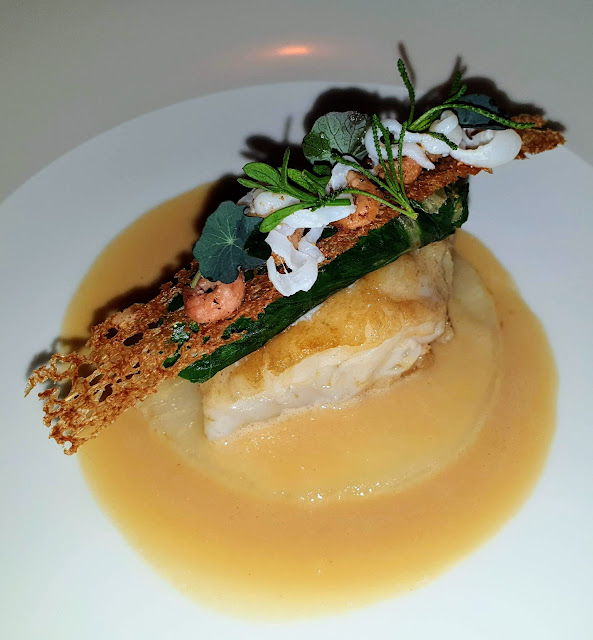 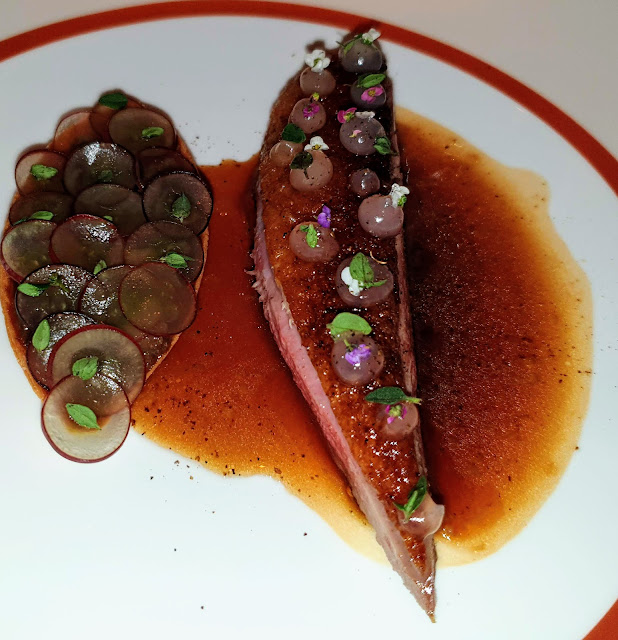 Then came a pre dessert called the 'Core Apple'. This is a sort of ode to the name Core. It was a perfectly formed, realistic looking mini apple that was served. This consisted of a apple flavoured mousse with a core of caramelized apple. Like a Tarte Tatin. Delicious. 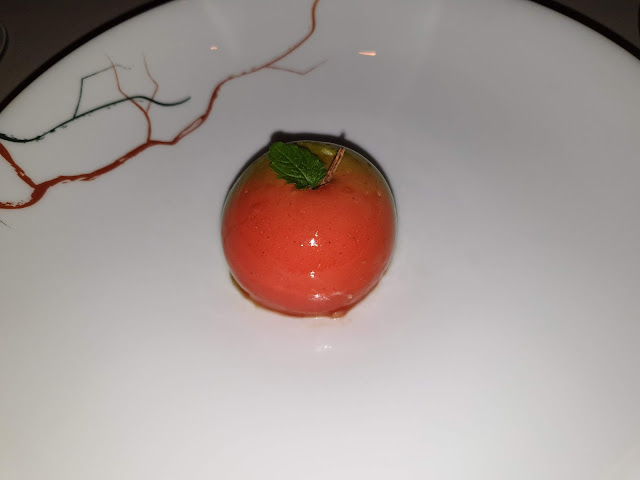 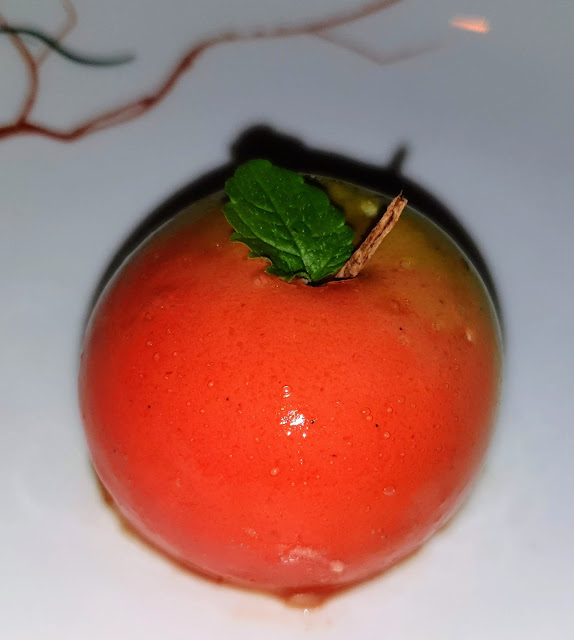 Desserts came next. A wonderful Lemonade Parfait. Please do look at the photograph. The honeycombed spun sugar top is a work of art in itself. This honeycomb top is a hexagon as is the jelly base on which the Parfait is set. Not only is this delicious tasting, light, limey lemonade but it is beautiful to look at. 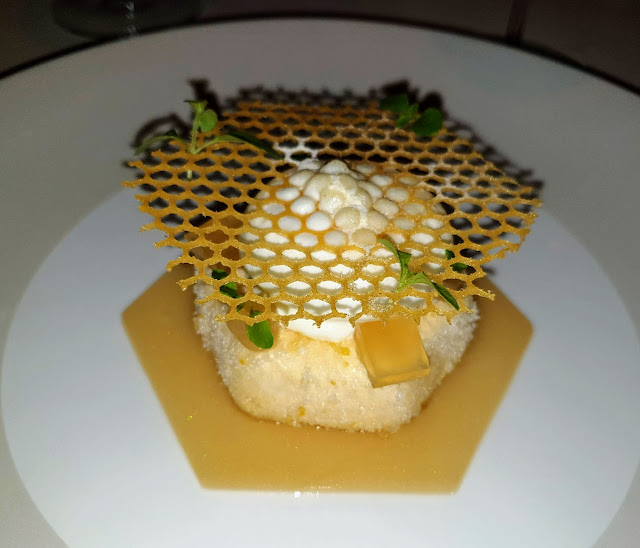 The other dessert was called the ‘Core Teaser’ another bit of high level pastry work. Chocolate, malt, Hazelnut and some exquisite light as air honeycomb. The plate it was served on was something that blew my mind. The plate was filled with Goose Feathers. How they got the feathers in without damage is a mystery to me. 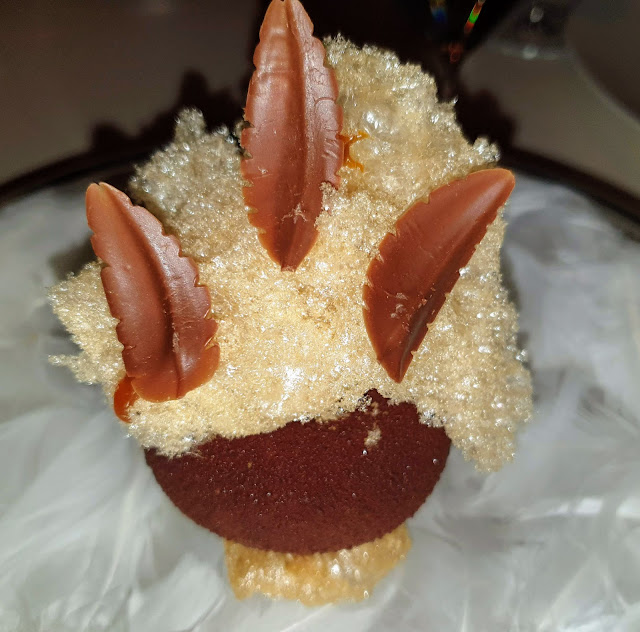 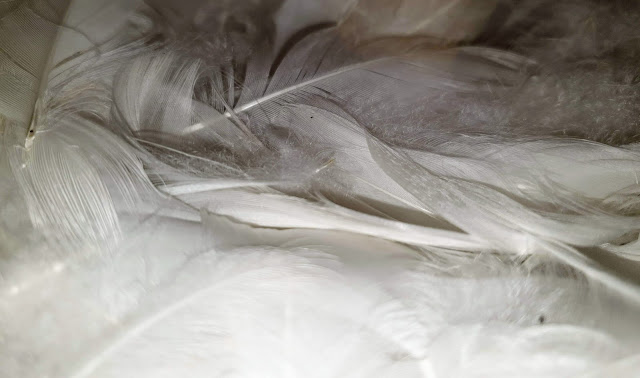 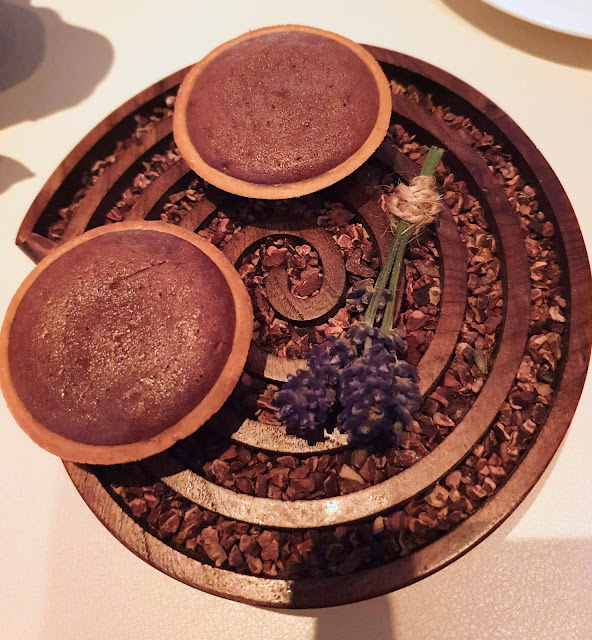 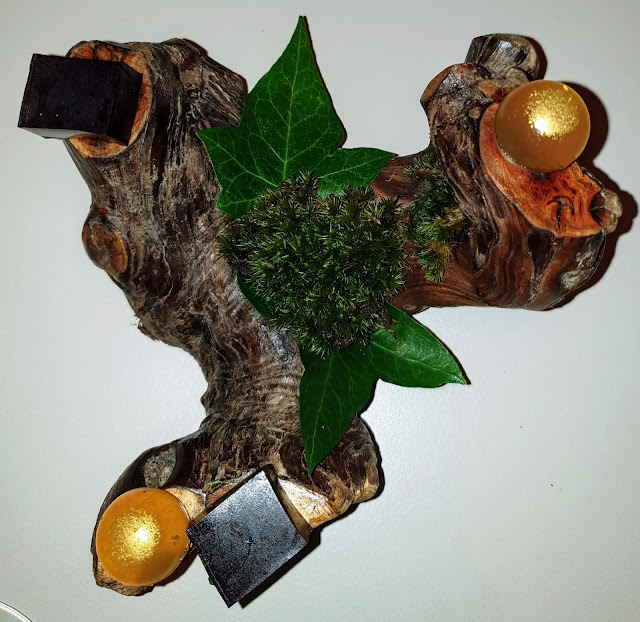 All in all, an excellent meal with good service. Of course, recommended. An A La Carte meal without alcohol or service costs £95 per person which is about INR. 9500. Worth it? At this level, I would say yes.


Posted by Stonethrowers Rants at 7:54 PM