A small back story. I have had a Gold credit card for many years on which I had accumulated lots of `points’. One day I called the issuing bank to figure out how to redeem the `points’. After going thru the options offered, most of which were rather meaningless – a leather briefcase, wallets and the like – I chose dining vouchers redeemable at any Taj Mahal hotel in India.

Neither the Queen nor I are fans of the food at any Taj so we thought we would use the vouchers to drink, but even for us that would have been a very copious amount of alcohol. So we decided to use the vouchers to go to restaurants that we have read and heard so much about. This is how we ended up at the disastrous Masala Kraft, which I wrote about earlier. The next on our list was Thai Pavilion the much self-touted authentic Thai restaurant at the President Hotel. We decided to eat here and took senior Mrs Stonethrower along with us.

You must have heard or read or seen on TV the hype behind Chef Ananda Solomon. I am reproducing the hype from the Taj website “Prior to launching Thai Pavilion in the early nineties, he spent months discovering and experiencing Thai culture and cuisine in remote Thailand.” This is reinforced by substantial publicity by his admirers [read people wanting free meals] like the completely eccentric Rashmi Uday Singh. With this background, could we expect anything but a superb meal?

On entering the Pavilion it felt that we were in a cricket stadium. The tables were so close together that there was barely any space to walk. The next diners chair was literally 6 inches behind yours. It was really very cramped. The tables were correspondingly small. The large number of waiters dashing about and the large open kitchen meant that the restaurant was utterly without any charm. It felt like a crowded college canteen or a dining hall in a railway station.

We were given our menus and were surprised at the prices. The menu was divided into categories – appetisers, seafood, poultry and meat, rice and noodles, curries and deserts. Each category had a single price. Thus, all appetisers cost Rs 575, all seafood and meat Rs 775, all curries were Rs 600 and so on and so forth. The prices are all subject to taxes of course. What this means is, a starter of golden fried prawn or Foie Gras both of which are expensive ingredients, costs the same as a Som Tam - the Thai raw Papaya Salad, one of the cheapest ingredients going. Strikes me as strange, but I am not complaining, this is something that the vegetarian Khandelwals, Shahs and Jains should be complaining about.

Along with our menus we got a plate of UFOs - Unidentified Fried Objects. Tasted OK but were obviously Khandelwal, Mehta and Shah compliant i.e. vegetarian. We were also given the oh so cute little towel that expand when water is poured on it. This gimmick had me thrilled when I was 4 years old, not anymore.

To start, senior Mrs Stonethrower asked for the Tempura Prawns with Tamarind Sauce and the Duck Foie Gras with some sort of Thai sauce. The prawns were unremarkable, oily, probably because the oil in which they were fried was not hot enough and the batter was way too thick. Definitively not a tempura batter! The Duck Foie Gras was good as far as the product was concerned; however, the sauce was rather ghastly. The Foie Gras had a garnish of what the waiter said was a Sea Asparagus. A quick look on the internet says that Sea Asparagus is Samphire which is totally different. Anyway, whatever it was, it was edible. This sauce as well as the Tamarind sauce accompanying the prawns were both muddy, dark brown, gloopy and thickened with corn flour. Strange. Sorry no photo of the sauce.


For our mains, senior Mrs Stonethrower wanted Tenderloin with Birds Eye Chilli and Holy Basil, which I happily seconded. The Queen wanted to have the Crispy Fried Fish with a Chilli Sauce a Thai classic called Pla Rad Prik. We also ordered Thai Green Curry with Prawns.

The Tenderloin was a unmitigated disaster. This is a classic Thai dish deeply influenced by Chinese cooking in as much as the beef is stir fried, a Chinese technique, and Holy Basil added at the last moment. What was served was a plate of sorry looking Tenderloin in a dark brown gravy. Virtually no Holy Basil nor Birds Eye Chilli. The Sauce/Gravy looked like a mutton curry. We have had this dish numerous times in Thailand and it neither looked nor tasted like the one we had at the stadium, sorry Pavilion.
The Crispy Fish was not what we expected. We thought we would get a whole fish with a sauce on top garnished with fresh coriander, basil and vibrant red chillies. I have sourced images from the web of what we thought the dish would be. See what we got. Once again a gloopy thickened sauce of a muddy frown colour. The fish itself was slices of Basa coated in the same batter as the prawns, i.e. the so called Tempura batter. This was topped with the muddy sauce and resulted in a soggy mess. Not nice. 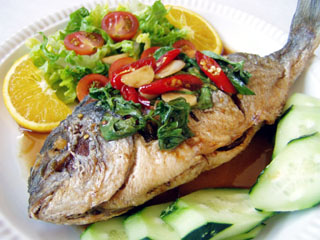 The Thai Green curry was OK. Bit lacking in depth of flavour. This was probably on account of the Curry itself being vegetarian so that it would be acceptable to the abovementioned Khandelwals, Shahs and Jains and the Prawn or Chicken was added at the last minute. But I am being picky here. The curry was the best dish, but by no means good. I hope you realise that a Prawn curry and a vegetable curry cost the same. Portion size would be the same. Prawns in one and the usual Baby Corn, Broccoli and probably Aubergine, carrot and potato. Can the ingredients have the same cost? Hey Khandelwals, Shahs and Jains you are being cheated!!!! Wake up!!!
The waiters were doing their best to hustle us. They insisted on serving the food to us and emptying the serving plate in one heaped round so there would be no need to offer seconds. They were unhappy leaving food on the table. They had to continuously be told not to serve the food till I photographed it. Yes it was Friday night and they had to turn the table. This further added to the total lack of charm.

Now you guys may say, Stonethrower you are being unfair as always. How can you compare Thai food as cooked in Thailand with what is made here? No I am not being unfair. The Taj itself says that Chef Solomon spent years honing his craft in Thailand. He has been cooking Thai food for close to 30 years. May I also draw your attention to the fact that Thai ingredients are readily available in Mumbai, Kafir Lime Leaves, Kafir Lime, Baby Aubergine, Lemon Grass, Galangal et al, so why should a trained chef have a problem replicating the food? Be that as it may, why is the food doused in these horrible brown, muddy gloopy corn flour thickened sauce? The sauces that were all too similar and showed indecision rather than choice. Thai food is all about freshness, the sparkle of mint, basil and coriander, the tang of lime, and the unique balance of sweet sour salty that we all read and hear so much about. All this was missing here. It was really like eating Panjabi Thai food. It looked like the sauces were substitutes for Daal. Sad. Does the food in the photos look like Thai food or Indian food with its thick sauces and muddy colour?

Because we had the vouchers, in a way we ate free. Don’t waste your hard earned money going here.