A. Wong, a Chinese restaurant in Pimlico near the Victoria Station has been around for a few years. It was a Cantonese restaurant called Kym’s, typical in London, owned and run by Andrew Wong’s parents. Andrew, a second-generation Chinese had no interest in the restaurant and, like Chinese and Indian children, was encouraged to study. He was admitted to Oxford, then the LSE. His father passed away leaving his mother to run the restaurant. He had to help her, which got him interested. This resulted in him joining catering school. Soon he was hooked. The restaurant was refurbished and renamed A. Wong. Wong undertook a 6 month journey through China to absorb the food and culture. On return he revamped the restaurant menu incorporating his influences and presented his interpretations.

In 2017, A. Wong won its first star in Michelin. The restaurant has been critically acclaimed for quite some time before achieving its star.

The restaurant is unusual for a Chinese restaurant. It has an open kitchen. A “C” shaped bar counter runs along one end of the kitchen where you can sit and have your meal. Tables are bare, no tablecloths, just starched napkins or ‘laptops’ as I call them. Stainless steel cutlery and chopsticks. No fine china, just reasonably ‘jada’ plain white plates. Tables quite close to each other. Bustling. The clientele consists of a mix of regulars, walk ins and reserved tables. Almost entirely white diners, we were the only two browns, much later 4 yellows walked in. Staff, largely a mix of Orientals, some white Eastern Europeans, no English as far as we could tell.

We had the tasting menu of some 10 courses plus amuse bouches. I am not going to describe each one. The Tasting menu is described as a “Taste of China” menu which gives you food from different regions, a sort of Top 10 Chinese Dishes.

All the food was excellent. No dud dishes. The food, in reality is traditional Chinese, with authentic Chinsese flavours. However, it is beautifully presented. Lots of tweezers at work. Lots of sauces, in fact, the food is sauced in a Western way not the gloopy sauces we are used to in India which we use like ‘Daal’ with our noodles. The 10 courses were served quickly unlike at the Ritz, which I have written about earlier. No flagging, except, at the time of the very last dessert.

The produce used was all top class. Lot of high quality Wagyu beef used, in small portions befitting the tasting menu. The beef was well cooked, seared on the outside, rare in the centre. Luxury ingredients like Lobster, Foie Gras and Abalone were also used. Very high quality of cooking and plating.

The only down side or bad bit was the quality of the covering on the Dim Sum and the Pancakes on the Duck. Thick, chewy. Very strange. Was this intentional to give texture or just poor quality, I do not know.

The dessert described as “Poached merengue with fruit textures” was, in my view, a bit of technical wizardry. The outer layer was a thin layer of caramelised sugar, like the sugar in a Crème Brulee. The next layer was poached meringue either a Swiss or Italian meringue. The core was Peach. Fantastic. Also offered was poached Peach with an utterly delightful Salt, Chilli Powder and Sugar powder. Much like we have with Peru or Guava in India.

The meal was a tour de force of skillful, inventive and creative cooking. The atmosphere and service were excellent. The food came out at short intervals and not long uneven pauses. Negatives? As I wrote, thick skins on Dim Sum and probably, if I am being nit-picky, a bit of a wild atmosphere for such sophisticated food. A quieter restaurant, white tablecloths and finer crockery would have been perfect. But these facts did not in any way diminish the food.

A tasting menu, for 1 without booze and service is GBP 90 or INR 9,000/-. A. Wong should be your choice if you want to upgrade your Chinese food experience from the usual Black Bean Pork and Ho Fun Noodles. This is quite different, though staying close to the real thing.

Apologies for a couple of blurred photographs. 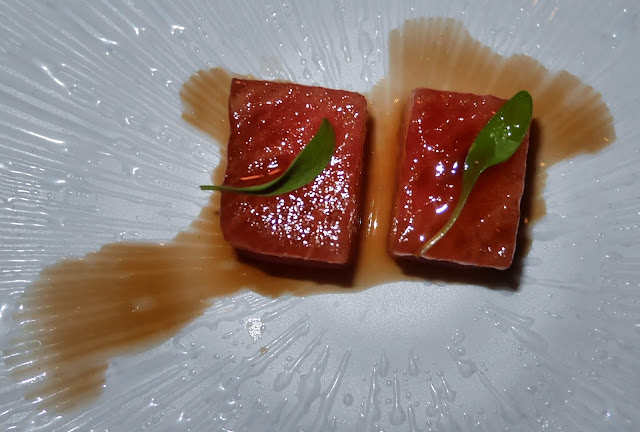 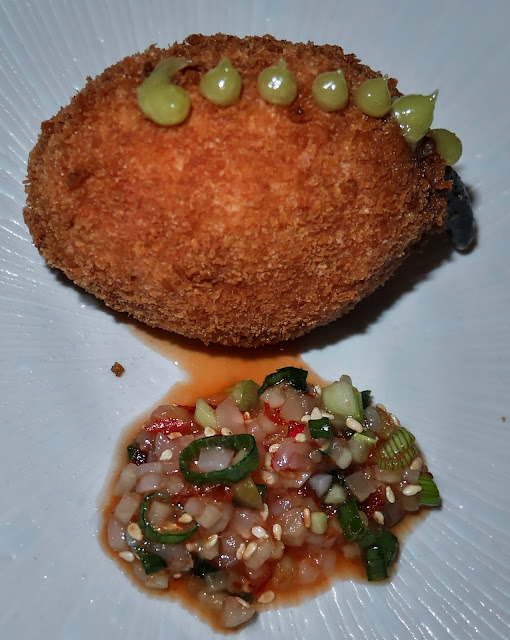 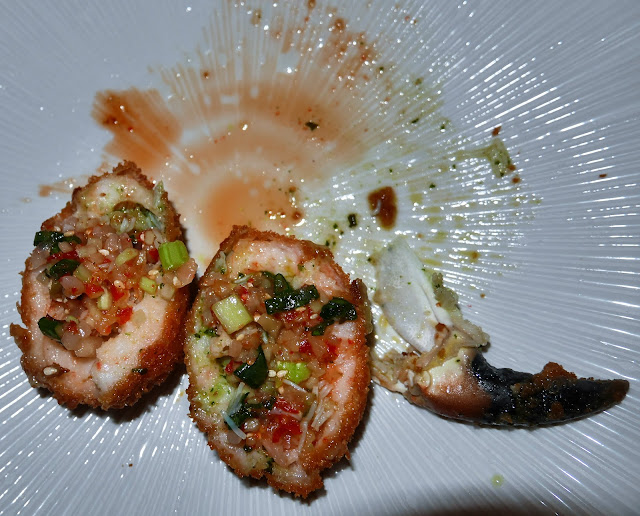 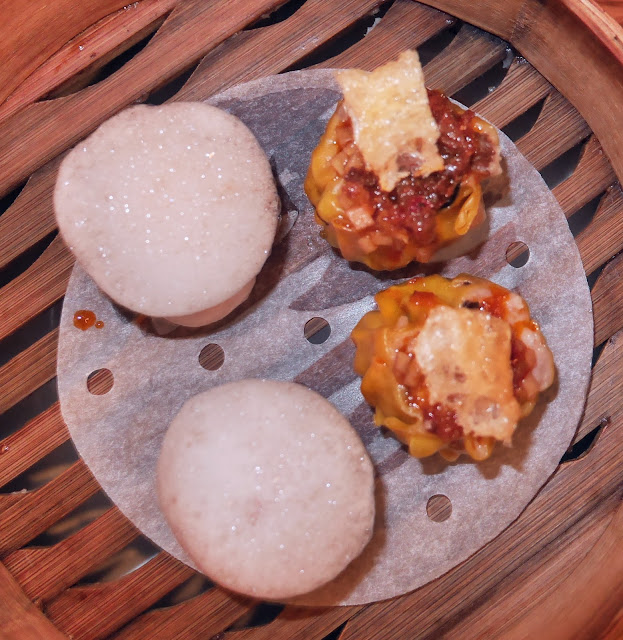 Dim sum duo. Har Gaw on the left, Shui Mai on the right 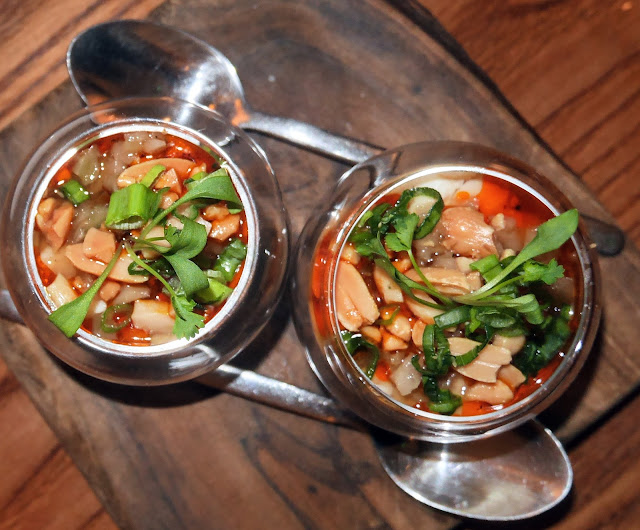 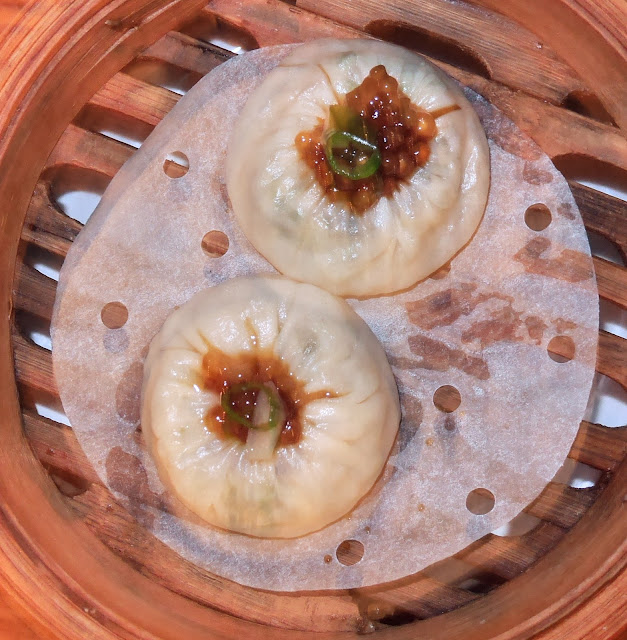 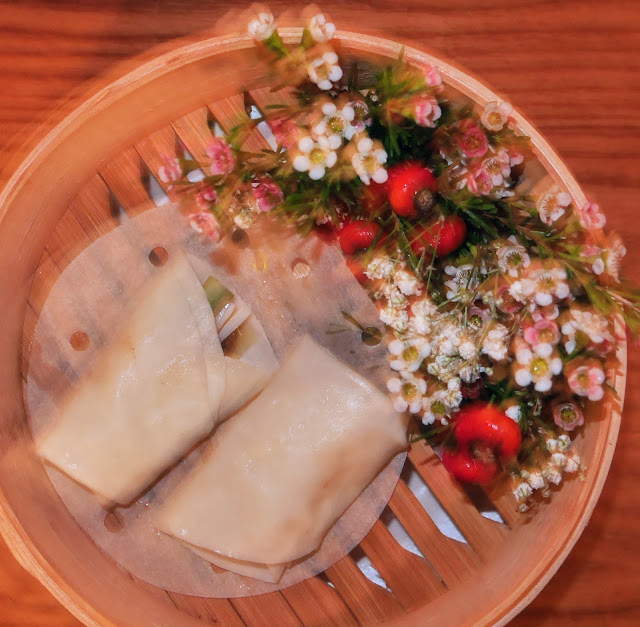 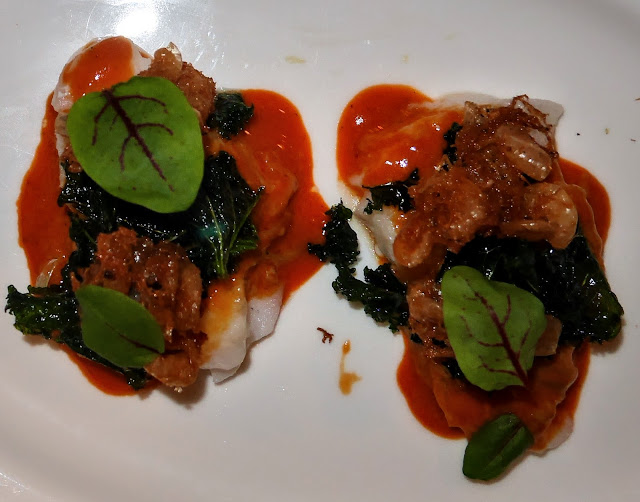 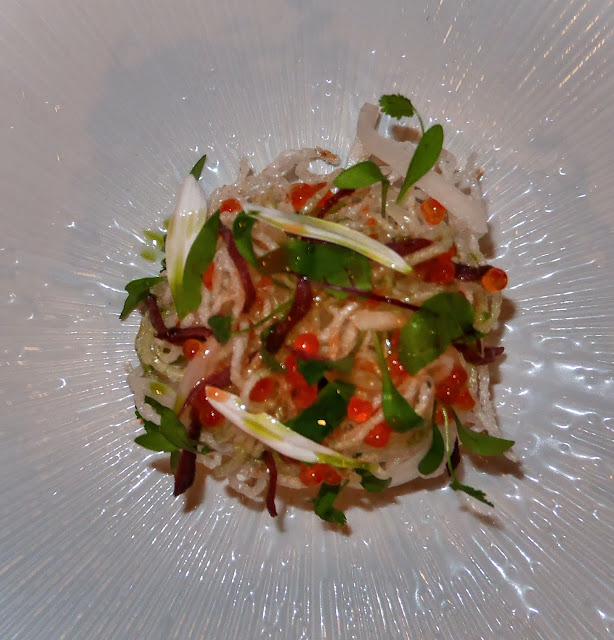 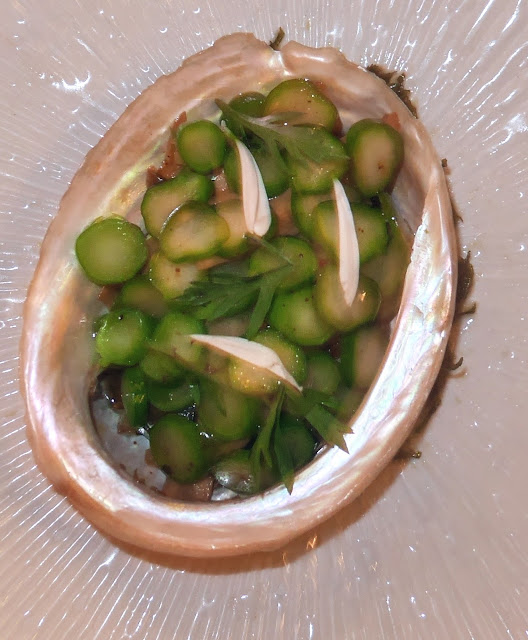 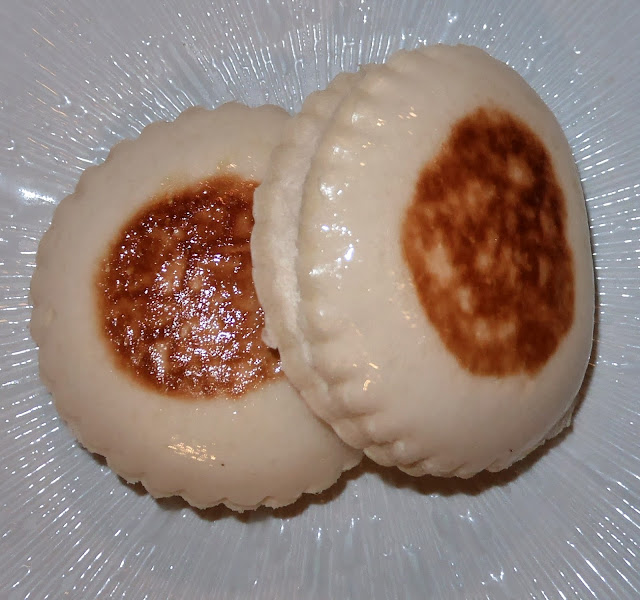 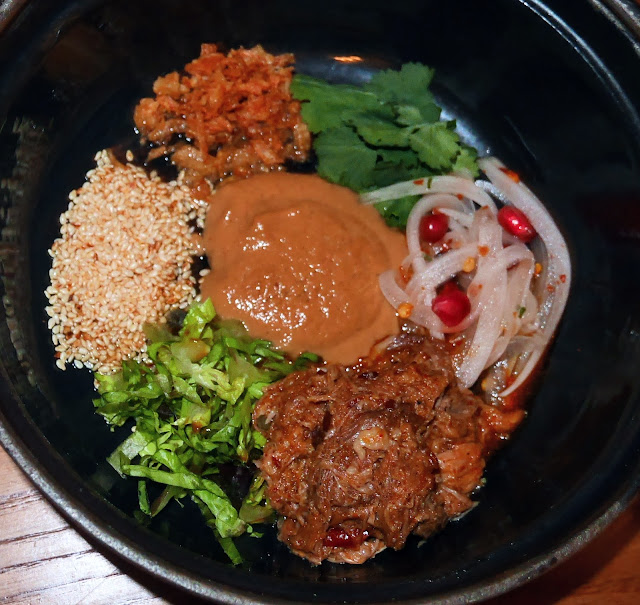 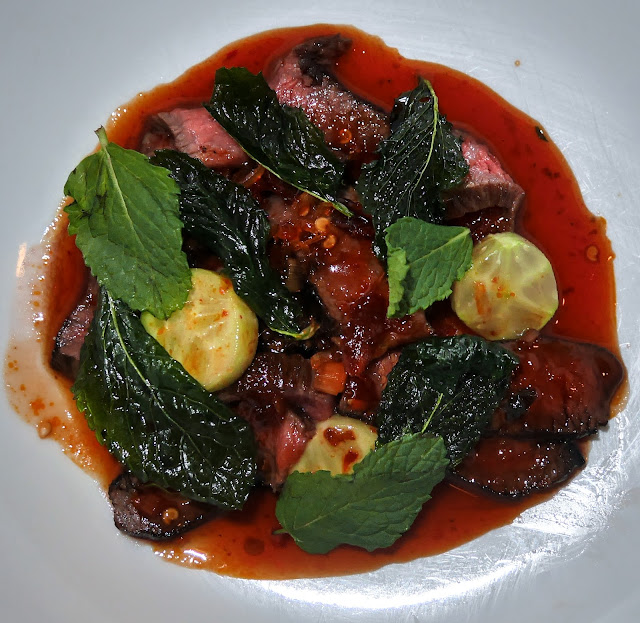 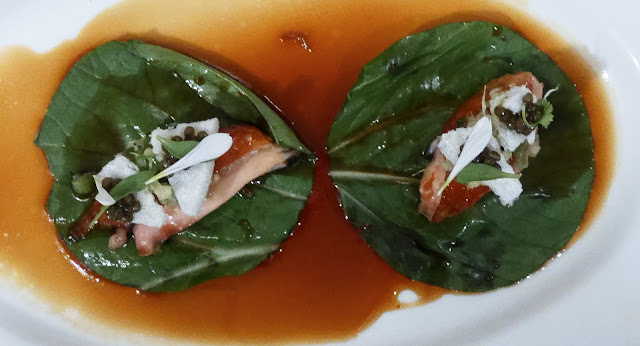 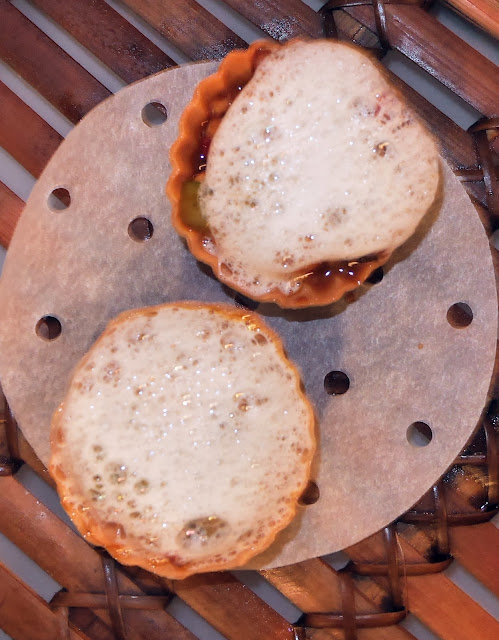 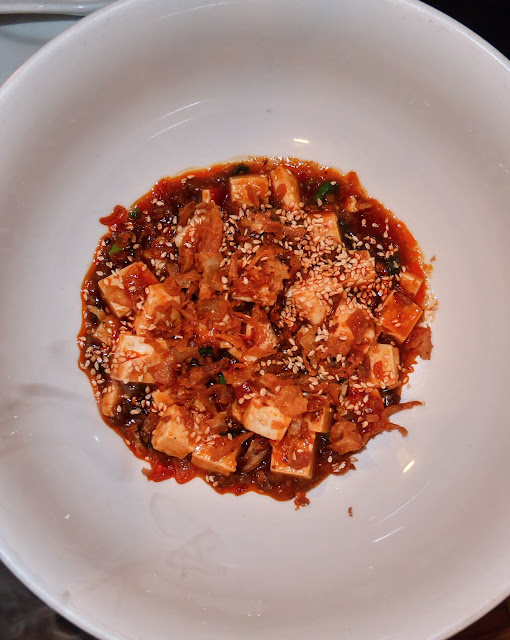 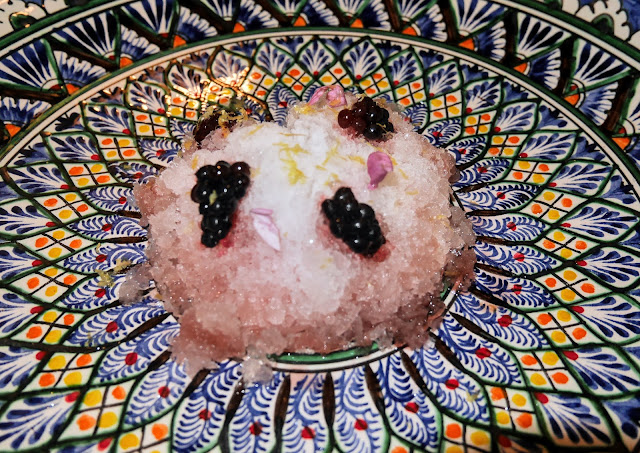 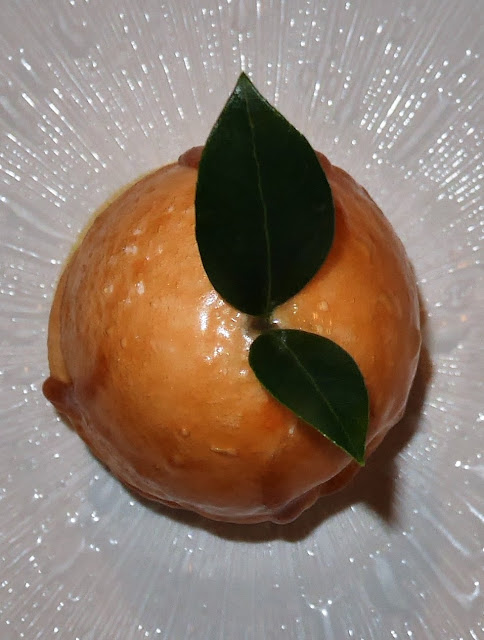 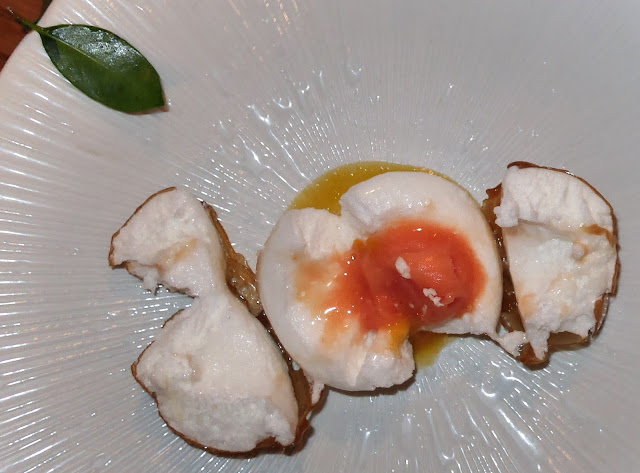 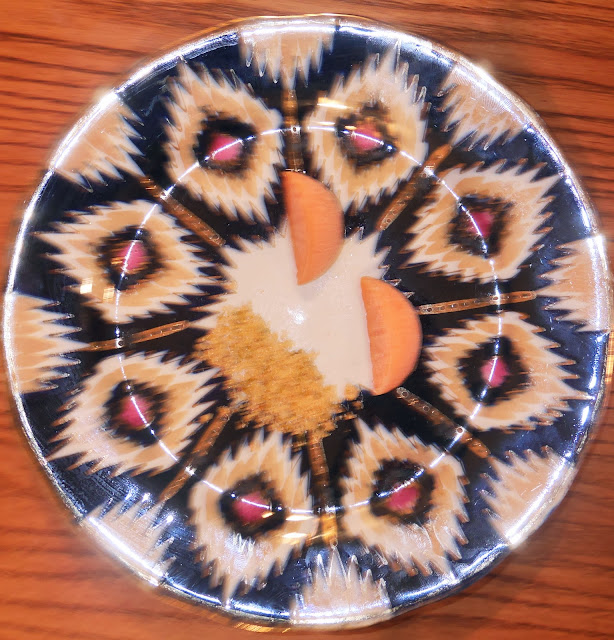 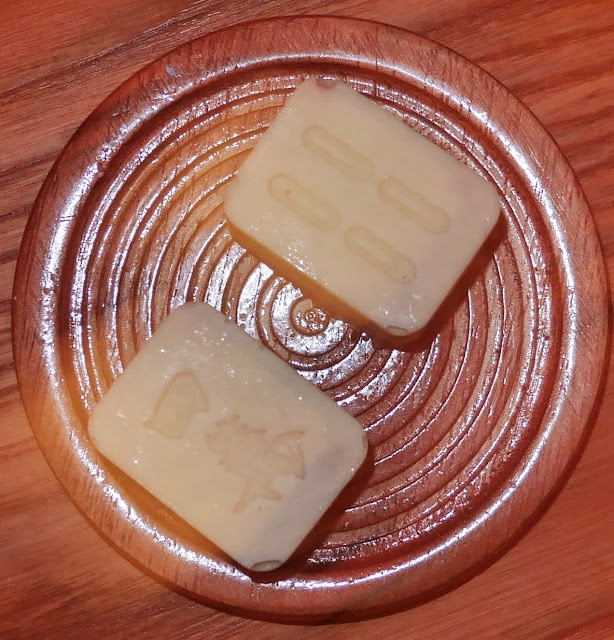 Posted by Stonethrowers Rants at 9:05 PM