In Indian English, we have some `very dear friends’ in Singapore. As soon as our travel dates were known HRH the Queen of Kutch let them know. They asked what we would like to do and eat. The answer was very simple – local food, your choice!

There was some back-ing and forth-ing between HRH and them. A local pizza place was suggested which `Dear Friends’ – who are widely travelled – said was world class. We had no reason to doubt them, but, local food was the brief.

On the appointed day we reached their apartment – condo – as they call it in Singapore. I was pleasantly surprised. Up to then, my idea of Singapore was based on walking up and down Orchard Road, taxi rides to Chinatown, Clarke Quay and Gardens by the Bay. The condo was barely 2 of Kilometres off Orchard Road and getting there through the back roads of Singapore was like entering another world. Getting off the main streets revealed a gentle, bucolic, Colonial and thoroughly relaxed city. This was nice. Almost suburban, almost USA movie like with bungalows, white picket fences and lots of greenery. There is a gentle side to Singapore – it is not all just Orchard Road, Little India, Chinatown, gardens, amusement parks and the Quays. This was liveable, this was a Colonial paradise.

You know what? I could live here. Ooops! I hope that is not Seditious. Just in case it is – “Mera Bharat Mahan!!!”

After a few cans of very cold beer and bracingly cold Prosecco, a large Uber was called, and off we went to Robertson Quay. This is yet another waterside eating and drinking complex along the Singapore River.

Red House Seafood is a large restaurant, with the entire frontage being open. High ceilings and the open front meant a perception of space, openness. Thankfully, the place did not have any air-conditioning. The air-conditioning in Singapore is set to near blast freezing temperatures, bloody cold! In addition, the weather was reasonably pleasant. Singapore is virtually on the Equator, just 1 degree north. And, if you remember your high school geography, and were not dozing in class, you will know that a tropical rainforest climate means, by definition, an average temperature of more than 18C for all twelve months, rain of not less than 60mm every month, no discernable season and high humidity. So the open front and the high ceilings were great in keeping the place cool. To keep the place cool there were huge 8 bladed ceiling fans lazily rotating. I mean huge. Mr. Dear Friend told me that these were called Big Ass Fans. I, of course, thought that he was joking. Then, on coming back, I checked. He was telling the absolute truth. There is a company in America that makes these fans. And, yes they are really known as Big Ass Fans. You can look them up if you need them at home. Something new I learned, thanks to Mr Dear Friend. 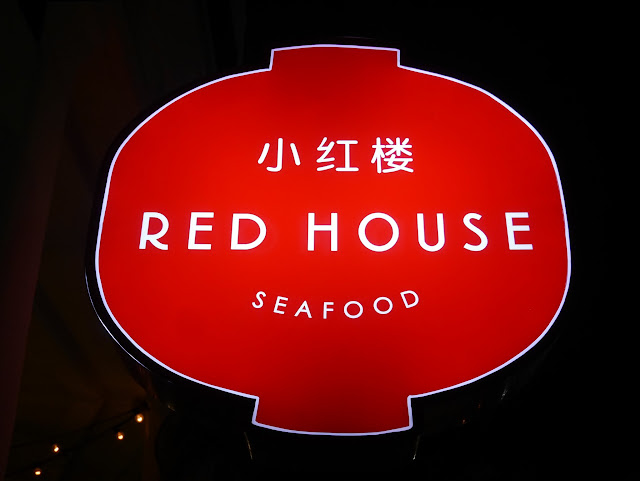 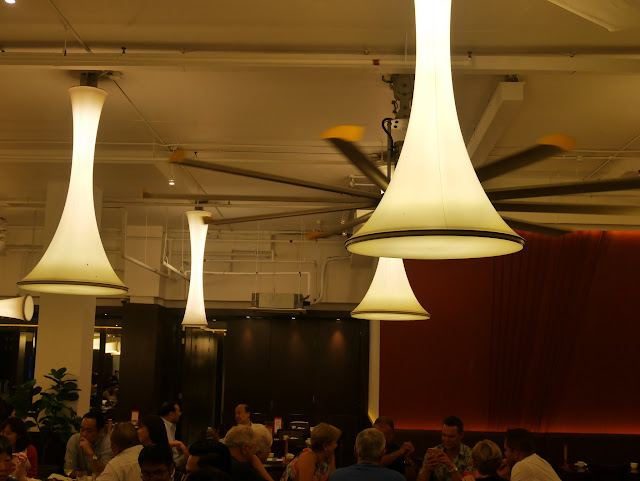 Mrs Dear Friend was in charge of ordering. The Red House Seafood Restaurant opened in 1976 and specialises, as you would have guessed, in sea food. First up for starters were three examples of UFO’s – Unidentified Fried Objects. These came with Mayonnaise – which Ms Dear Friend said she loves. These UFO’s were perfect to soak up the pitchers of beer that were wantonly being ordered. Good start. 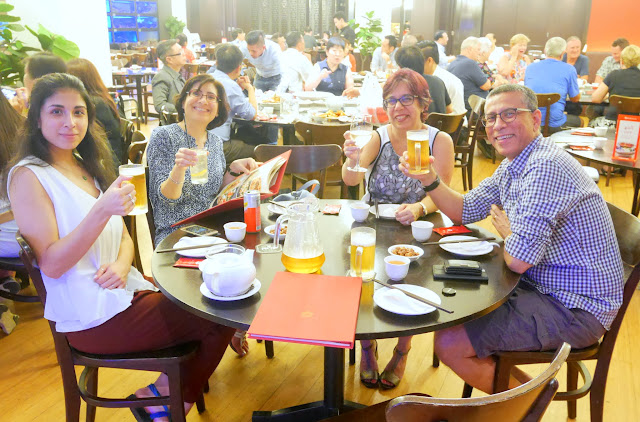 With Dear Friends and Beer 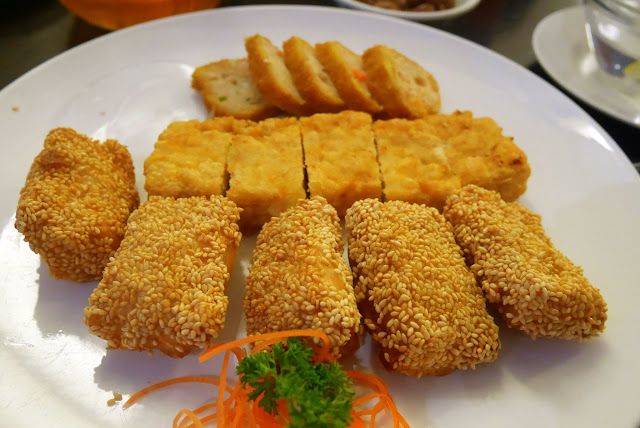 Two Singapore Crab with an order each of fried and steamed Chinese Bread along with a portion of Fried Rice was ordered for our main course. How much more local could you get? Yes, I know that many of you would say that you should eat Singapore Chilli Crab at Jumbo Seafood. But, Dear Friends live in Singapore and know better, you don’t live in Singapore, so shut up. I requested that, if possible, I would like to order a portion of Hor Fun Noodles or Char Kway Teow. This a typically Singaporean flat Rice Noodle dish with Prawns that should have a lot of “Wok Hei” or the Breath of the Wok – its aroma. “Wok Hei” is created when the intense heat of the Wok partly burns the spattering oil that is being tossed in the Wok and caramelisation of the food being cooked in the Wok. No problem, Hor Fun was ordered. The name was an immediate source of school boyish coarse rude jokes about, well, certainly not hoes; the farming implement. Much hilarity followed. 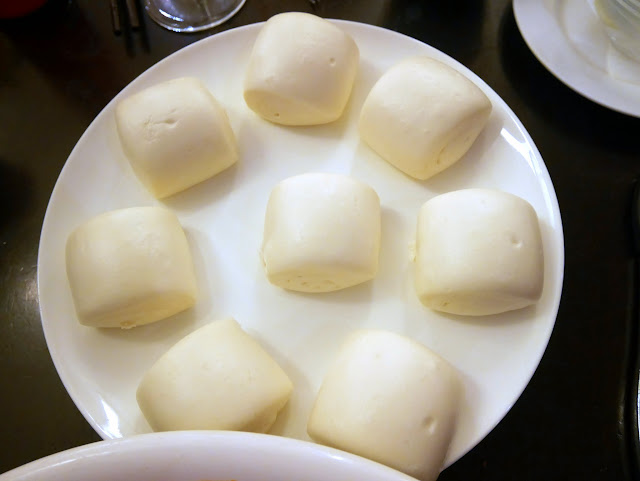 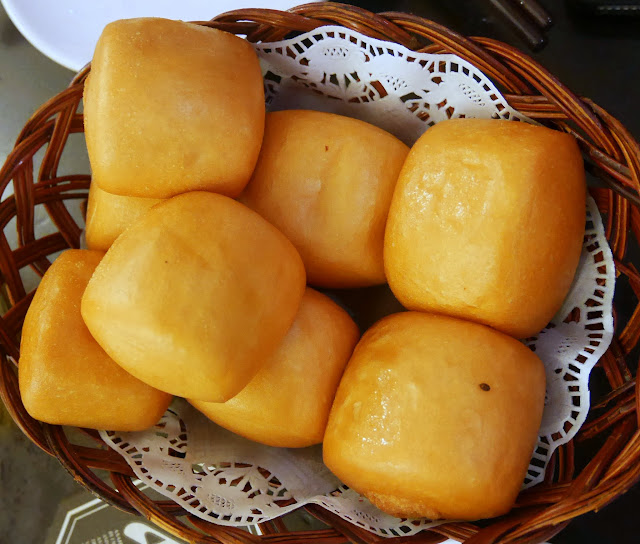 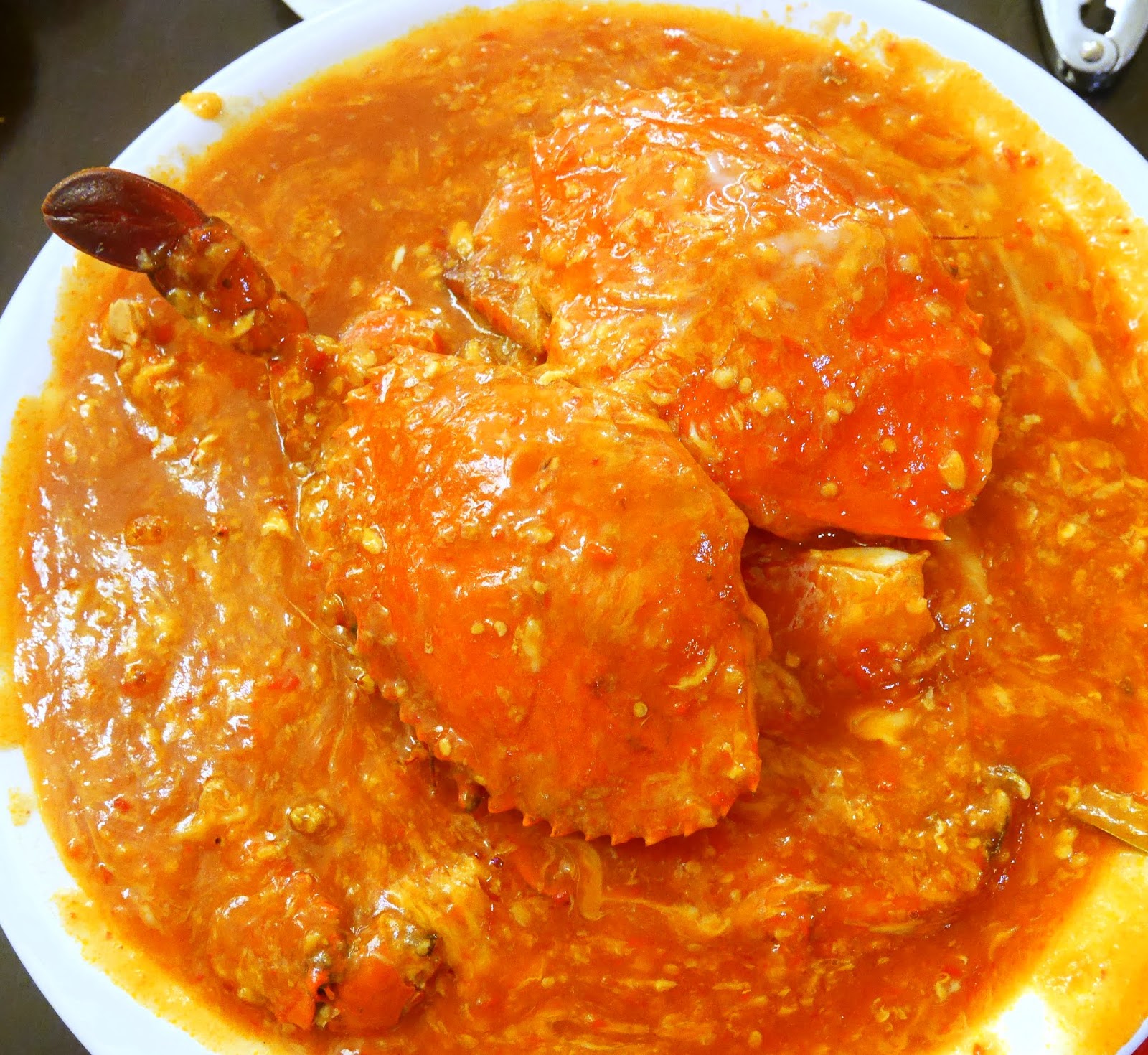 The Crabs came with a lot of sauce. Like good `Desi's’ this was the `Daal’ that we required with our `Bhaat’. I ploughed into the crab. Two hands and a set of strong teeth were required to get to that delicious crab meat. Much cracking and slurping sounds. Mrs Dear Friend being a doting wife and loving mother dutifully used a crab shell cracker and pulled out morsels of meat for HRH, her husband and child, before feeding herself. “Bharati Saanskriti”. I hope dear readers; all these comments of Indian-ness will counter my earlier sentiment of wanting to live in Singapore. Of course, once I had finished my Crab, I excused myself to wash my hands and then it was time for me to eat the excellent Hor Fun. Lots of “Wok Hei”. The rice noodles were great to soak up the “Daal”.

A lot of the crab was devoured but a fair portion was left unfinished. This was packed. Thank God, I would have been very upset if that had gone to waste. Hands washed again, some more photos taken and it was time to leave.

Dear Friends did exactly what we had requested. Local was the brief, and, bang on local it was. It was a most enjoyable evening with much hilarity, great conversation and of course, the food was excellent. One thought to end with. Lings Pavilion is our favourite restaurant in Mumbai. They do a Singapore Crab. The Crabs in Mumbai are smaller, but that is not the point. The point is, that the Singapore Sauce that they serve in Lings Pavilion is very very similar to what we ate at Red House Sea Food. If you want to eat a close approximation of Singapore Chilli Crab, go to Lings Pavillion.

Posted by Stonethrowers Rants at 4:11 PM