A cousin – née Stonethrower – now married to a Le Grande Fromage in the MNC nutrition and healthcare space, invited us for dinner to The Bombay Canteen.

The Bombay Canteen is in the Kamala Mills compound at Lower Parel - the horrid strip of disbanded cloth mills comprising of the Dharavi like Mathrudas Compound, Kamala Mills, Raghuvanshi Mills and Phoenix Mills. Poorly located with a totally unimpressive façade and decidedly dodgy environs. But, alas, this is where the trendy Sobo Bombaywallahs hang out.

Reservations were made well in advance by Mr. & Mrs. Le Grande Fromage for an unusual for Mumbai slot of 7.30pm. We had no problem with that. This was the only time the restaurant was willing to reserve, the other being an unearthly 10 pm. Both couples arrive bang on time as is our wont and were soon seated.

The room is industrial chic or in other words, don’t spend too much money on the décor. A bar runs along one wall with a large TV screening the IPL match. You have tables for four and several communal high tables running alongside the bar. This is like what you get at LPQ [Le Pain Quotidian]. A counter with stools runs along another wall. Unfortunately, there was loud Bollywood music playing, which meant conversation was difficult. Our table had no light and despite asking several times for the table to be lit [there were lights on the ceiling above the table but they were not switched on] we were told by an arrogant and grumpy manager that the lights were not working. He refused to turn down the music saying that was the vibe of the place and the music was ‘for the enjoyment of all diners’. He then condescended, looked at us pityingly and gave us a torch so we could read the menus. This is the truth! 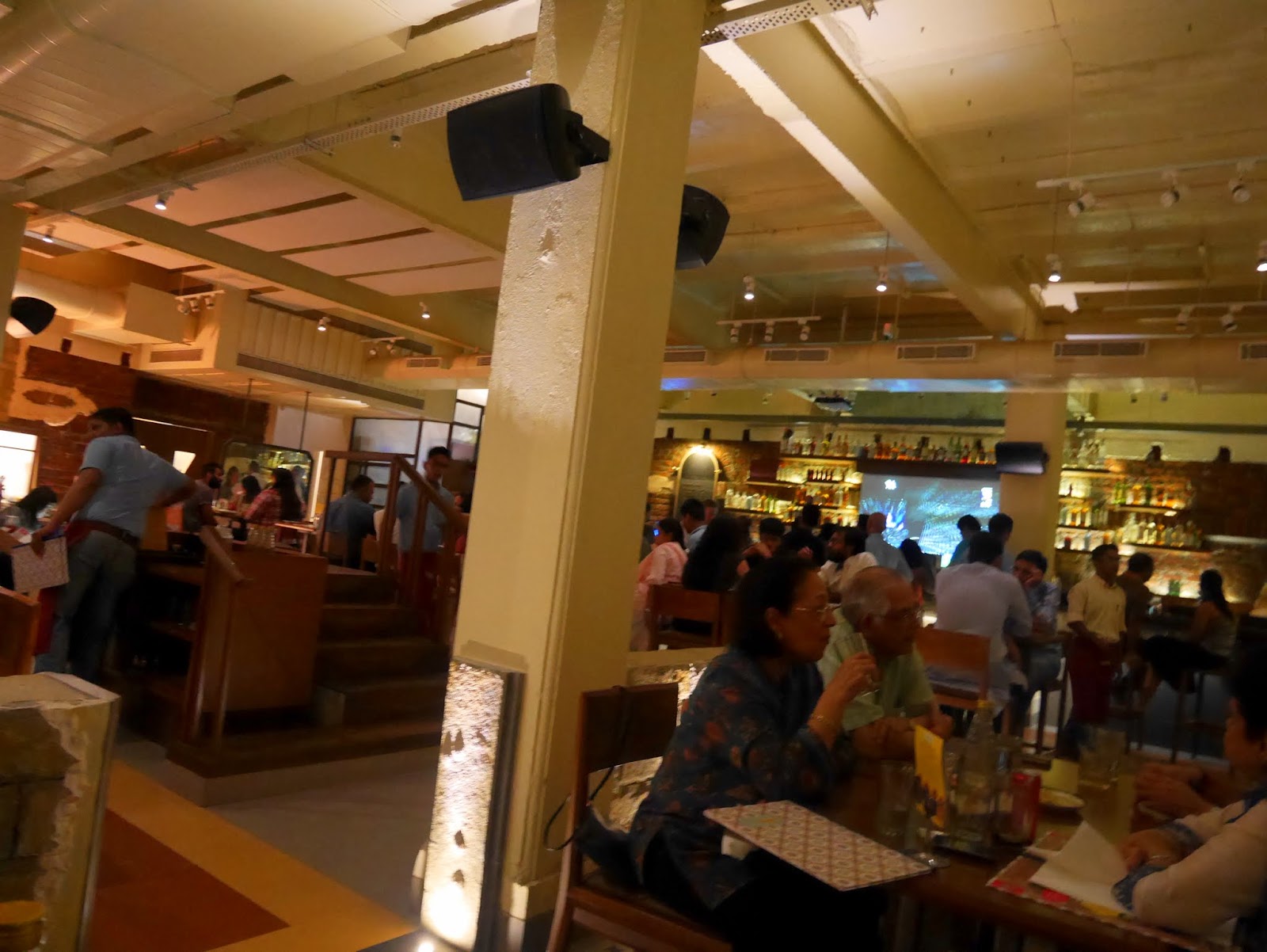 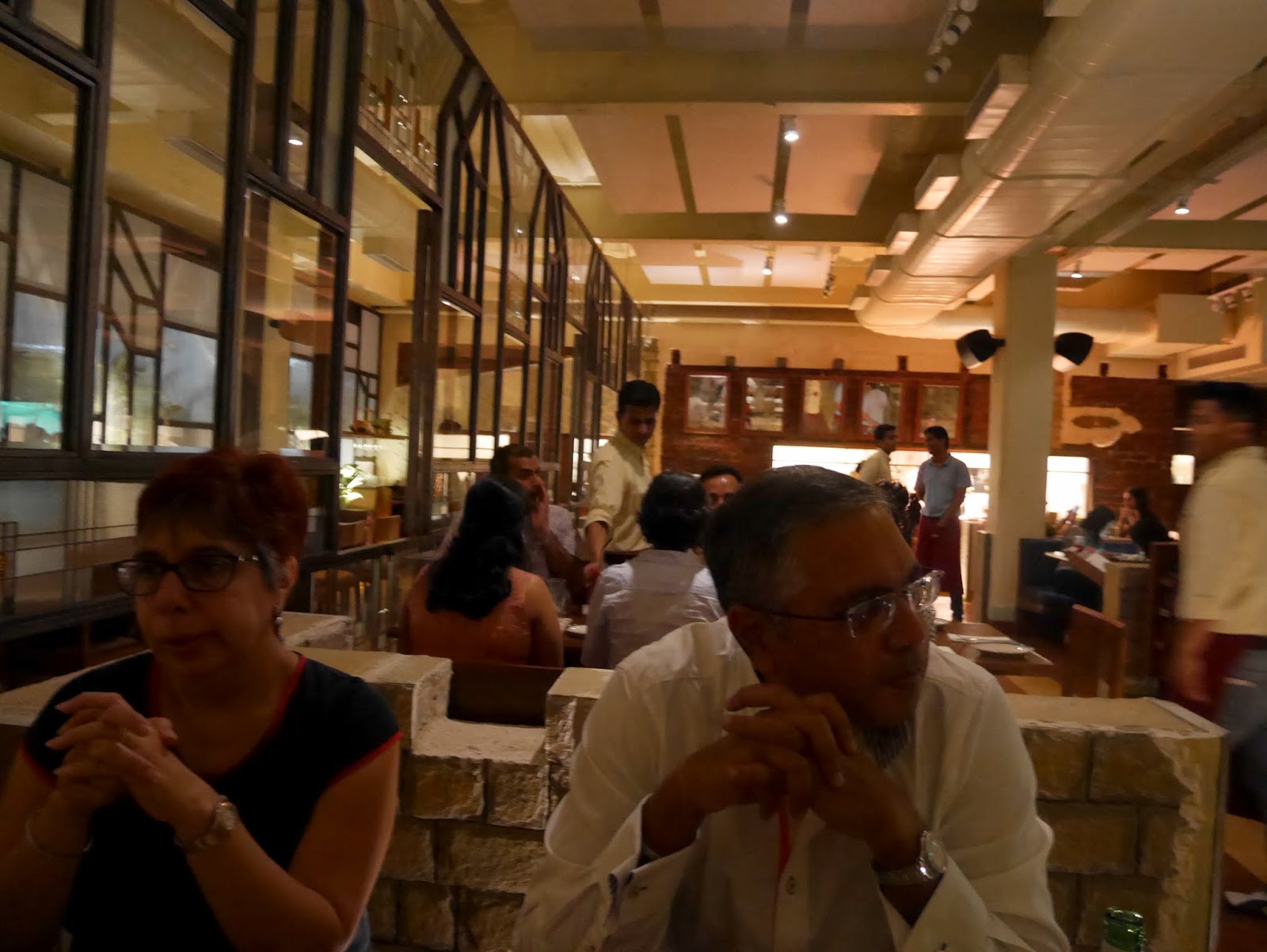 Service staff was totally clueless and were incapable of speaking in the Queen’s English let alone articulating what they were serving. Coupled with the blaring music, the task of understanding what was being served was a challenge. It was only the captains who hovered that had any idea of how to take an order or answer a question.

Appetizers described as `Chotta’ in the menu were ordered. First up was the Goan Pulled Pork Vindaloo served in on a soft Methi Thepla, a sort of play on a Soft Taco. The Pulled Pork was topped with pieces of crisp Brun Pao. This combination worked well. I did have a complaint. There were four of us at the table. We got three Theplas. Surely they could have served us four and charged us accordingly instead of serving just three and leaving us all feeling awkward. I mean the restaurant has Floyd Cardoz as a mentor or guide or something. He should know of such things. In fact, a few weeks ago we were at the lovely trendy Chiltern Firehouse in London where a normal serving portion for their signature crab donuts is three pieces, but without having to ask, our table got a plate with four pieces since we were four at the table. No awkwardness, smooth service. Costs almost nothing extra for the restaurant and scores many many positive brownie points with the punter.

We had also ordered Kejriwal Toast, which was a play on Eggs Kejriwal, a famous Bombay Club dish. This was adapted and much more sophisticated than the original of Fried Eggs with chopped Green Chilly. Here a round of bread was topped with a soft poached egg and green chilly coconut chutney. Great dish. In fact it was so good we ordered another round.

Charcoal Grilled Chilli Calamari with sliced Pickled Onions and Black Pepper Prawns served with grilled Nimbu were ordered. It was getting confusing with the Calamari and Kalimiri [Black Pepper] but we managed to keep our descriptions in place. Both these were good with everyone on the table preferring the Kalimiri Prawns.

While we were eating the starters a waiter turned up with a tray with small bowls of what are described as `Chintus’. These are really small portion of accompaniments to the drinks what we in Mumbai would call chaknas or software to have with the drinks – hardware. What was offered was Chilli Cheese Straw which was thoroughly mediocre and pickled root vegetables – Carrot, Turnip and Beetroot which was quite nice.


After the decidedly disappointing start to the evening this was a 180 degree turn for the better. This was good food. Our moods were lifted and we looked forward to our main courses. We ordered three main courses described as `Bada’ in the menu.

My Uncle's Coconut Mutton with Lotus root, Lemongrass & Fried Onion Masala had tender cubes of Mutton and a curry that was flavourful. A good mutton curry. The Choriz "Bunny Pao" with Goan sausage & broad beans stew with Pui Saag (Spinach) was far more interesting. This was a play on the South African Bunny Chow where hollowed bread is filled with a lamb curry. Here the restaurant custom baked hollowed out bread and fills it with a Goan Sausage and Broad Bean stew. This was served with a traditional Masala Dabba with various condiments that, to me. Looked like fixings for Khao Suey. I was a bit mystified by the arrival of the Masala Dabba. I sprinkled some of the condiments, but to my mind they added nothing to the dish. Good gimmick though.


The last main course was a most unfortunate looking Banana leaf wrapped roasted fish 'catch of the day' marinated with Kerala Tamatar Masala. I have said, and I maintain, that Indian food photographs very badly especially traditionally presented Indian food. I am often amazed how bad our curries look and how readily we eat them despite their looks. Frankly, this dish looks like human excrement on a plate. Honestly, it looks absolutely disgusting and totally unappetizing. This was a dish that you would have been happy to eat at an Apoorva, Mahesh or Trishna. It was fish covered with a coconut masala. Mrs. Le Grande Fromage loved the fish. Please look at the photograph and tell me if you would eat this? Hey Floyd Cardoz could you do something here?


The quantities were on the smaller side and I think that we should have ordered four main courses and not three.

Desserts were offered and two were chosen. Guava "Tan-Ta- Tan" which is served on a puff pastry with Lal Mirch Ice Cream. This was a play on the famous Tarte Tatin. It appeared to me that this was not baked in the Tarte Tatin style i.e. upside down and presented turned over. This version had Guava which was baked in a Puff Pastry tart base. Caramel was piped onto the plate. This presentation seemed inspired by the Tarte Tatin served at Gordon Ramsay. I had no problems with this. It was delicious. On the Lal Mirch Ice Cream, I was unsure. It was a decent ice cream and thankfully not much chili flavor. A good dessert.

The Khubani Ka Meetha which was served on baked yogurt with apricots, almonds & crushed orange cookies was, I thought, a winner. Ordinarily a Khubani Ka Meetha is sickeningly sweet and the Apricot or Khubani cooked to an absolute pulp. This version was far less sweet and the Apricot had texture. The baked Yogurt or Bhapa Doi a Bengali specialty on the bottom was an excellent counterpoint and the crumbled biscuit added much needed crunch and texture. Well conceived dish.

All in all what did we think?

The good points. Good food with good strong flavors and bold spicing. They are not shy of using spice. An accurate menu in as much as every dish was correctly described and what was on the menu was served to you, total honesty. No listing of expensive ingredients and not finding them on your dish. Many dishes are unique, with excellent twists and adaptations which I believe will influence how restaurants in future in Mumbai will start to present and cook food.

The bad points. Poor service. And as far as the food is concerned two faults, major faults. All the food was served lukewarm at best – Indian food should be served hot, Garam. This was not so. Let us understand that almost all the food was pre prepared as it was some sort of curry that is prepared in a vat at the start of service. It has to served searingly hot. For me a big no no serving it lukewarm. The second problem is that there was a lot of penny pinching on the quantity of meat or rather the lack of meat in a dish. Meat or proteins are the most expensive component in a dish. The quantity of actual mutton in the My Uncle's Coconut Mutton was minimal. The dish had a lot of Lotus Root, far more in proportion to the mutton. The Choriz "Bunny Pao" with Goan sausage & broad beans stew really skimped on the Goan Sausage. The dish had loads of Broad Beans. This did not leave you with a happy feeling at the end of the meal to realize that there was so much Nickel and Diming. It really is not necessary. The noise levels were staggering. Our evening got very tiresome as having a conversation was impossible. Pity. Are you listening Floyd Cardoz?

Would we go again? No. Should you go? Probably once.

Posted by Stonethrowers Rants at 2:18 PM