My birthday was brewing up. You, dear readers, know we do like French food, which is simply difficult, if not impossible, to get in Mumbai. However, I had a flash of inspiration. Why not have dinner at the Hemant Oberoi Restaurant? In theory it seemed the perfect choice. Do read the following three paragraphs I have extracted from the restaurant website. Typically, full of hyperbole. I do like the braggadocio of gems like “he took the fine dining culture to unbeatable heights.” and “the fine dining restaurant is set to elevate the dining experience and create culinary history! “

“Chef Hemant Oberoi introduced Indian diners to cuisines from across the world. His knives have carved the evolution of the culinary industry in India. Whether it was Mediterranean cuisine at the award winning Souk, Sichuan at the iconic Golden Dragon, Japanese at the world ranking Wasabi Chef broke boundaries in gastronomy. At the legendary Zodiac Grill he took the fine dining culture to unbeatable heights.

Today the same celebrated master chef has created his own company -OB Hospitalities, a brand that will change the dynamics of hospitality. Already making waves across continents Chef Oberoi he has finally launched his flagship outpost in Mumbai. Named after the maestro itself. Hemant Oberoi, the fine dining restaurant is set to elevate the dining experience and create culinary history!

The menu takes guests on a global culinary journey with European, Peruvian and Asian inspired dishes. Each dish tells a story with the focus on introducing the city to new flavours, unique presentation and exquisite ingredients.”

Bottom line, leaving the swagger aside, this was a fine dine restaurant serving European food helmed by a Chef who knew his onions. I agree that the menu is not totally French or European, it does have other cuisines too. So, a reservation was made for a Monday evening at 8 pm for 3 persons, HRH the Queen of Kutch, Senior Mrs. Stonethrower and myself.

The restaurant is at BKC in the Jet Godrej Building which shares a compound wall with the MCA Club. The building also houses a bakery Elementaria, O Pedro, Toast & Tonic, Gateway Tap Room and Butterfly High [a “restobar” from the folks who gave you Shiv Sagar],  All these are for the Millennials and Instagrammers. Hemant Oberoi stuck out like a sore thumb with a hugely different clientele.

As you enter, on the left is the bar with a few tables, the main restaurant is on the right. Very high ceilings, I mean really high. Faux wood wallpaper lends a clubby feel. Lots of hard stone surfaces, a black unpolished granite floor, heavy curtains somehow did not give you an impression or feeling of luxury or elegance. Tables had white tablecloths and napkins, decent heavy cutlery and reasonably poor quality “jada’ or thick crockery. Certainly not Bone China or Fine Porcelain. The plates were make by RAK Ceramics from the UAE. The Glassware was decent – Schott Zwiesel.

Menus were handed out, just one a la carte and a drinks menu. Gin & Tonic each for HRH the Queen of Kutch and me and a Ginger Ale for Senior Mrs. Stonethrower. Simple enough. It took 20 minutes to arrive. While this was bad enough, to my horror, the cans of Tonic and Ginger Ale were carelessly popped opened at our table, poured out and the cans [albeit not empty] were left on our table. Shocking in my book. 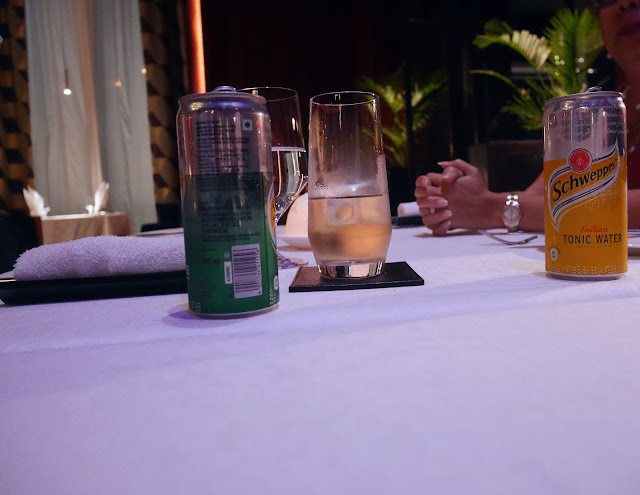 About the time we started to order our food, the waiter told us that the Chef was in and he would be happy to “curate” – his words – a meal for us. He named a few dishes that he would have offered us, but they seemed to be uninteresting so we continued with Plan A and ordered our food.

By this time my blood pressure was shooting up, and my critical eye was becoming larger and larger. Looking over HRH the Queen of Kutch’s shoulder I noticed a light with a fused bulb. By this time about 40 minutes had passed since we were seated. Our reservation was for 3. Directly in front of me was a 4th place setting still remaining uncleared. The phallic table napkin was irritating me no end. I felt like slapping it down. Suddenly there was a flurry of activity, the setting was cleared and an amuse bouche was served. 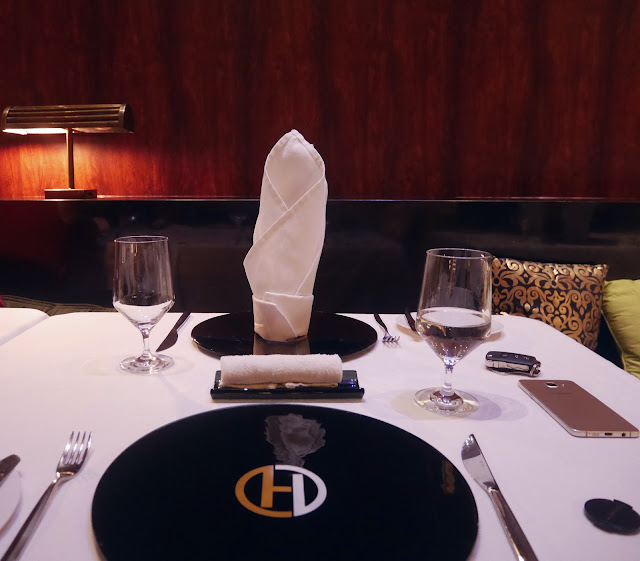 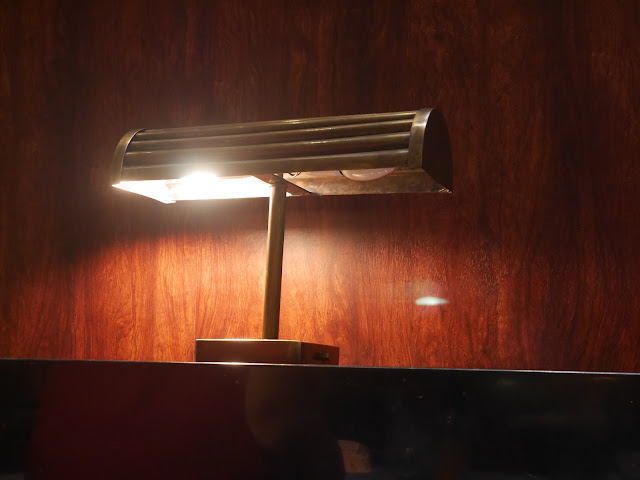 This where it really got beyond the pale.

On our charger plate was placed what looked like a Commode. I kid you not. In the centre of the Commode was a perfectly cut cube of pink jelly and a splodge of white cream. A waiter grandly announced that this was an Amuse Bouche. It was being served compliments of the chef, it was free [yes, I swear he said that] and that this would set the palate afire or something to that effect. I hesitatingly took a bite of the contents of the Commode. It was Raspberry Jam with Truffle Cream. Yes, folks Raspberry Jam or Jelly. To start the meal!!! Cloyingly sweet, as you would expect of Jam. 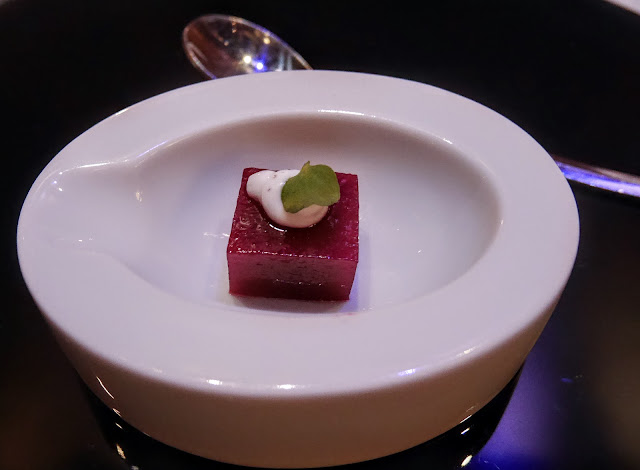 Hmmm. Not a good beginning at all.

Next up came the first courses. HRH the Queen of Kutch ordered Oberoi’s signature dish, the Brie and Truffle Souffle, Senior Mrs. Stonethrower ordered Beetroot Cured Salmon and I ordered a Torchon of Duck Liver.

The Souffle was the best dish. But even this was mild and quite flavorless. Needed much more Brie and the cream required more Parmesan or Gruyere and real Truffles or better quality Truffle Oil. It was a good Soufflé but was not going to win any prizes. A poor replica of the truly magnificent Souffle Suissesse served at Le Gavroche. 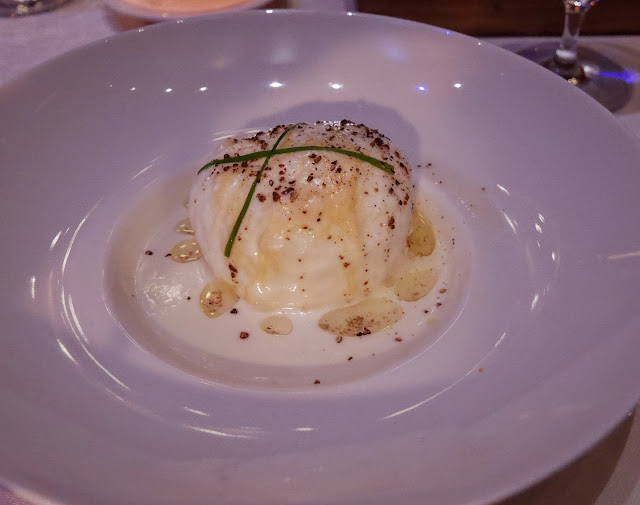 The Beetroot Cured Salmon was tasteless. No Salmon taste, no beetroot and frankly no acid. Just looked damn pretty. According to me served on an inappropriate plate. A plain white or even blue plate would have made this look even better. 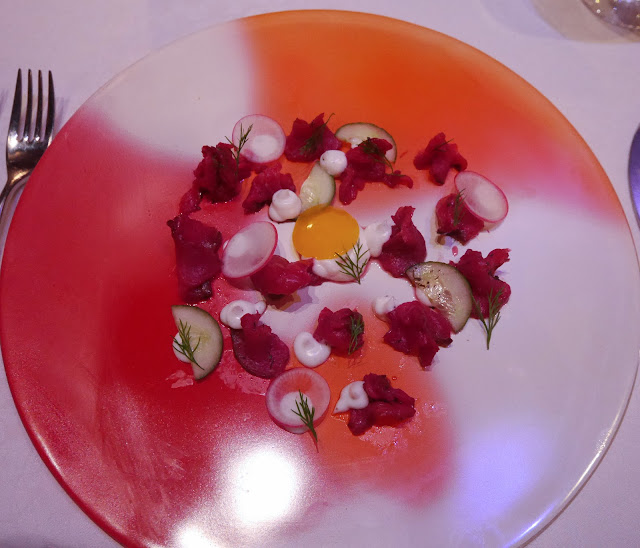 The Duck Liver Torchon, in theory, is supposed to be a Foie Gras Terrine. A classic French dish. To be technical, a Foie Gras Terrine is made in a Terrine dish so is shaped like a brick and served sliced. A Torchon is the same preparation and is cylindrical in shape. Here I was served a slice. It was beautifully plated. However, there was no Liver taste giving me the impression that there was very little liver and masses of whipped cream to bulk it up. The texture suggested exactly that. Why did this happen? Possibly because, Indians can’t handle the strong taste of liver, or, to cut the cost Oberoi simply adds more cream. Anyway, poor. 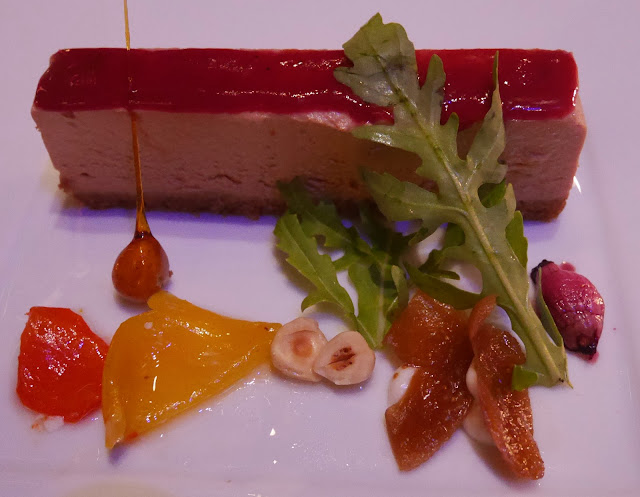 By now we were really worried. The start had been poor.

HRH the Queen of Kutch, had ordered the Miso Black Cod, a dish made famous by Nobu. She was warned by the waiter that it would be sweet, which she was well aware of. Senior Mrs. Stonethrower had the Butter Poached Salmon with Cauliflower Carpaccio and Cauliflower Puree. I ordered the braised Lamb Shank. 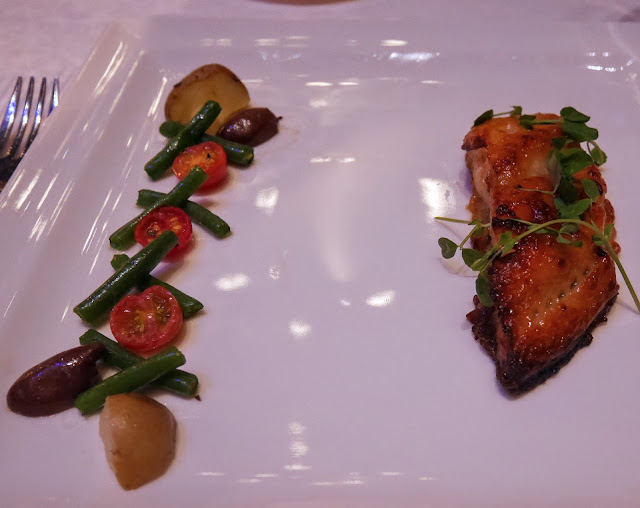 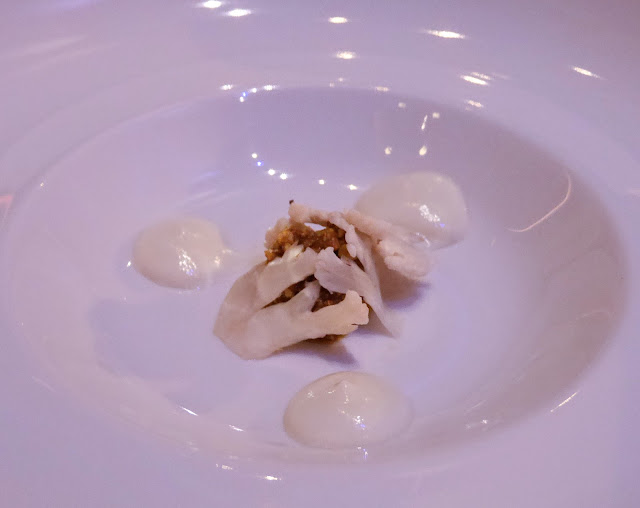 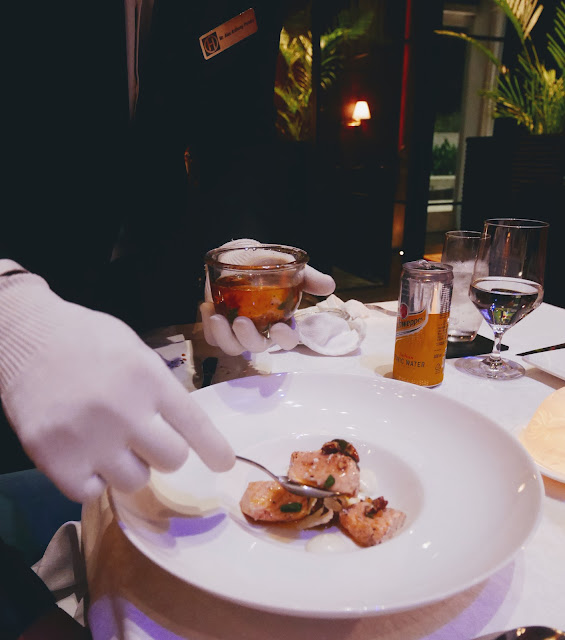 The Salmon being plated. The damn cans of Tonic are still there! 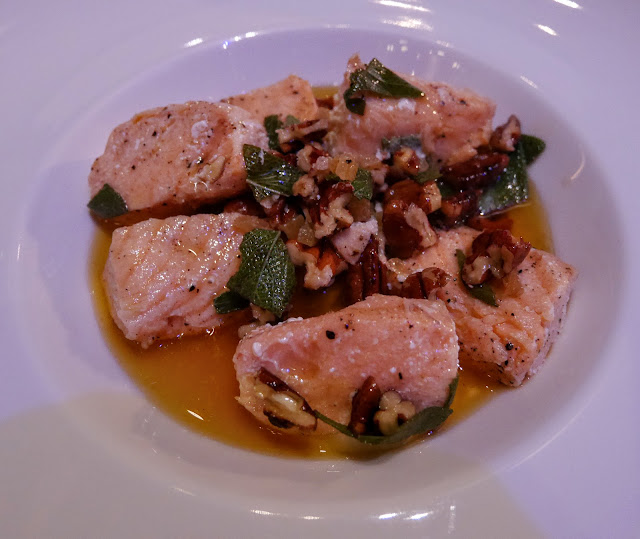 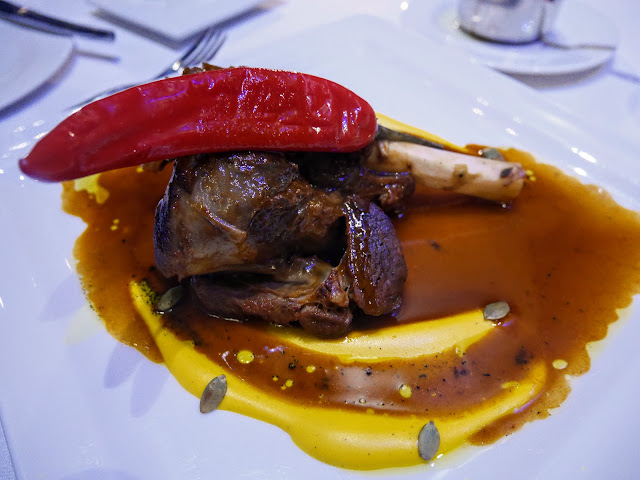 To our collective surprise the main courses were knockouts. Excellent, each one of them. Also ordered was a side of Mange Tout with Almonds. Brilliantly cooked. This was skillful cooking, tasty and correct. We heaved a sigh of relief and devoured our food.

Now, a man was striding around the restaurant with a proprietorial air. Senior Mrs. Stone thrower said he looked like Oberoi’s son. She was right. Siddharth turned up and started chatting. Not knowing who he was I happily told him the starters were rubbish but the main courses were excellent. Then he told us that he would be introducing Indian food, with a twist [it always has to have a twist]. We groaned. Obviously, the restaurant is burning. Indian food is now the rage in Mumbai, as ridiculous as it sounds. Earlier it was Chinese and then Pan Asian. Now its twisted Indian – Pao Bhaji Fondue and Pani Puri deconstructed. Sad.

For dessert, we asked for Crepes Suzette which would involve tableside action. We said we would share. After absolutely eons, trolleys were wheeled over, flames lit, sugar caramelized some flambé action and lo and behold the Crepes were served. There were three of us. Only two crepes were served!! I mean really!! Can you not count? Can you not see? The Crepes were acceptable. HRH the Queen of Kutch got none. 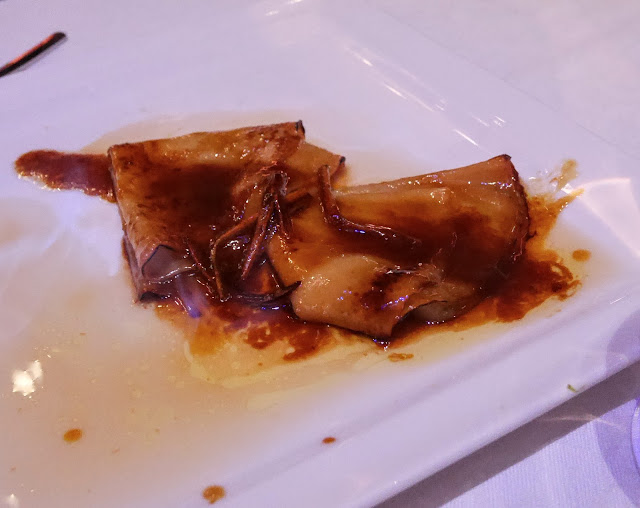 In the end we had a pleasant evening. The meal was schizophrenic – the first part bordering on poor and the second much better. Service was by any standards poor. Drinks took eons. Leaving that aside, the service was of the “now who has ordered what” kind. This is simply unacceptable in a restaurant that calls itself fine dining. This is OK at a Pizza Parlour or Indigo Deli, but not here. There was a lot of irritation with the music. First it was inappropriate, ranging from almost EDM to R&B and Soul. Should have been soft Jazz. The volume was inappropriate. Some requests from us resulted in the sound levels being reduced to tolerable limits.

The restaurant had just two tables of 3 each being occupied. At one end was a large table of, I am not joking, ONGC officers and their wives. Obviously, men and women sat at opposite ends of the table. I am mystified as to what ONGC would have eaten.

As we exited at about 11.15 pm, yes, it took 3 hours to serve 3 courses, we saw hordes, literally hordes of Millennials and Instagrammers from the next-door restaurants and bars in the adjoining places. Obviously, Hemant Oberoi is barking up the wrong tree with his morgue like restaurant. Could it be wrong food, for the wrong people, at the wrong price point, in the wrong area?

We paid Rs 18,000/- for the three of us including service excluding booze. Was it worth it? Probably not. Would we go again, not sure. Should you? Probably not. Will it last? At this level no way? Can Indian with a Twist work? In my view, Oberoi has missed the boat, Kalra with his Farzi Café and Punjab Grill has taken this far far away.

No culinary history is being created.

Posted by Stonethrowers Rants at 7:21 PM