If you have read my previous post on Sofia, you will know that Bulgaria has been ruled by Ottomans for in excess of 500 years. That is a long time. Their influence on the cuisine is huge, I would say much larger than the influence that the Mughals had on our food in India. Not only is there the Ottoman influence but there is the Mediterranean influence, not from the Italy/France part of the Mediterranean but more from the Greece Turkey part.

We had 3 dinners in Sofia. Our brief was to eat local cuisine, not Pizza, Pasta, Sushi or Burgers nor exotic French food. And, as is our wont we researched a lot. While in Sofia we went into Supermarkets which are an excellent source of information on what is local. The Concierge at out London Apartment was Bulgarian and was absolutely enthused that we were visiting “my Country”. He gave us a list.  We had a lot of inputs.

Bulgaria has good wines. These were well priced and we drank some good stuff. With water in Sofia being so good, the Beer was good too. I drank only the local stuff, don’t ask me the name, it was written in Cyrillic. Like in Turkey which has Raki and Greece which has Ouzo, herein Bulgaria you have Rakiya. Similar Anise flavoured clear liquor drunk by everyone. No, it is not powerful. Like most spirits it is 40% proof. It is simply a myth that it is more potent. Of course, like in Spirits you have exceptions, but generally it is 40% proof.

The Bulgarians eat all kinds of meat, and all are on offer in restaurants – Beef, Veal, Pork, Chicken, Turkey. Also, on offer is Tripe and Tongue. You get meatballs as well as kebabs all grilled. You have chops also grilled on coal. Roast Chicken is common. Stew’s are common.

Yogurt and Cheese plays a large part. Yougurt is served thickened like Labneh with Cucumbers and Dill as a starter. Yogurt soups are popular as is Ayran which is basically “Chaas” or “Lassi” very similar to Turkey. Cucumbers, Cherry Tomato, Olive and Aubergine are most common. Cheeses come in all types using Cow milk as well as Sheep milk. From Cheddar varieties to Blues to a bland Feta everything is available and eaten. Breakfasts are much like Turkish Greek breakfasts with Honey, Olives, Cheeses, Tomato and Cucumber being eaten.

Salads are very good in Sofia. You have a huge selection of salads on every menu. I seriously recommend you start your meal with a salad. Shopska Salad is all pervasive, and is good.

So, all in all, food and drink in Sofia is good, with easily navigable menus.

Our first dinner was at Pod Lipite [which translates as Under the Linden Tree] a 5-minute taxi ride from our Hotel. This restaurant is classic Bulgarian and rustic. Every guide book and every internet recommendation will name this place. Pod Lipite has been around from 1926 and they say that the produce for the restaurant comes from the family farm. The décor was plain, as I said rustic, with wooden benches minimally upholstered. Large with nooks and crannies and passages leading to rooms inside. At some point you have a band coming along and singing incomprehensible Bulgarian songs. Large tables were booked by tour groups. You get the picture. The terms Tourist Trap could easily be applied here, with justification. I would say that a vast majority of the punters were non-Bulgarian. 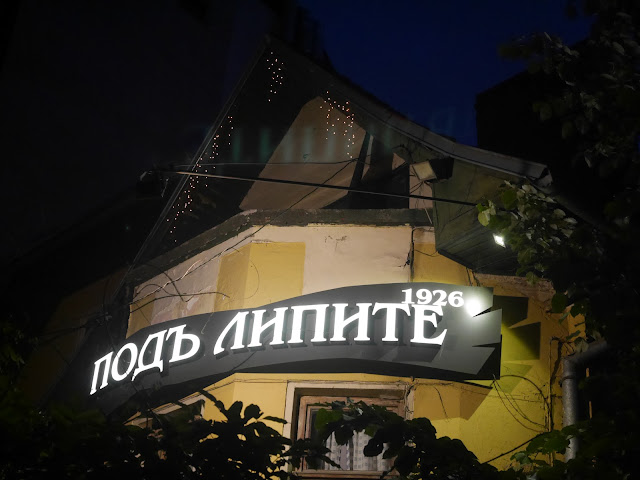 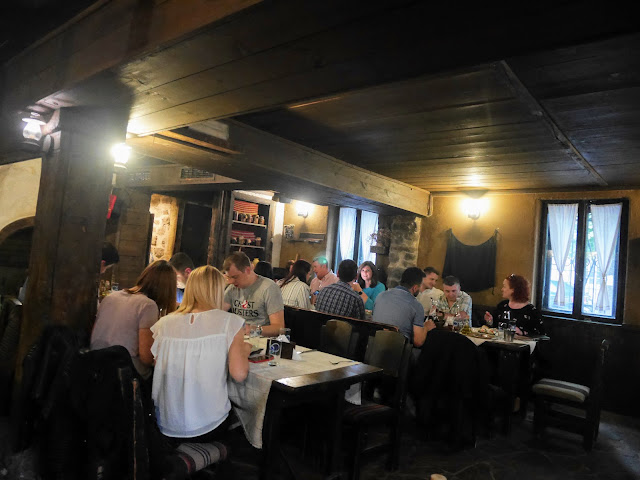 The food was disappointing. The Yogurt Salad insipid and under seasoned. My plate of mixed grill had been cooked way in advance, slightly reheated and thoroughly overcooked. HRH the Queen of Kutch ordered a dish of Aubergine with Veal. This came in an earthenware dish which means it should have been baked and come out absolutely nuclear. Alas this was not the case. The dish was good but missed the mark. It was sort of Imam Biyaldi crossed with Eggplant Parmigiana. Careless cooking. Peasant food and we ate like peasants. Poor. Not recommended at all despite what the guide books say. To be honest, this is a place for wild bacchanalian drinking of copious amounts of Rakiya in a large group to be bedded down with heavy stodgy food. That would have probably been fun. We paid about 75 Lev for our meal with wine. That translates to INR 3500/- Cheap very cheap. 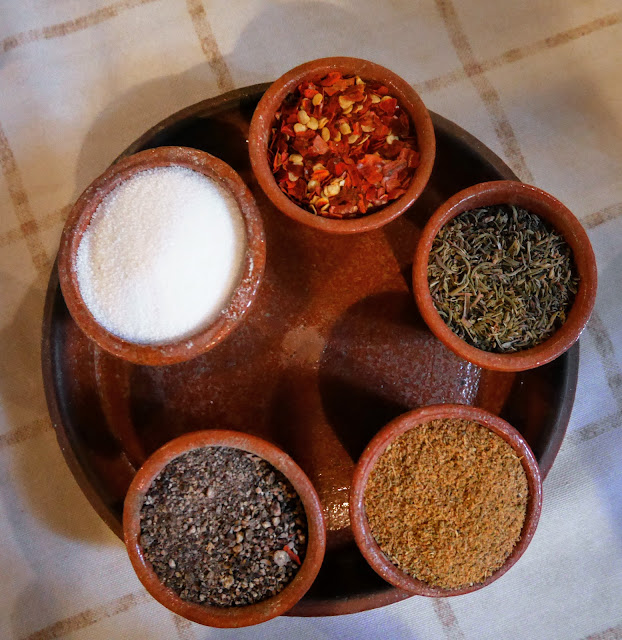 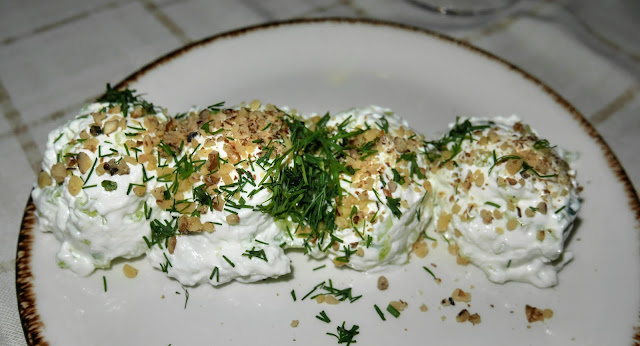 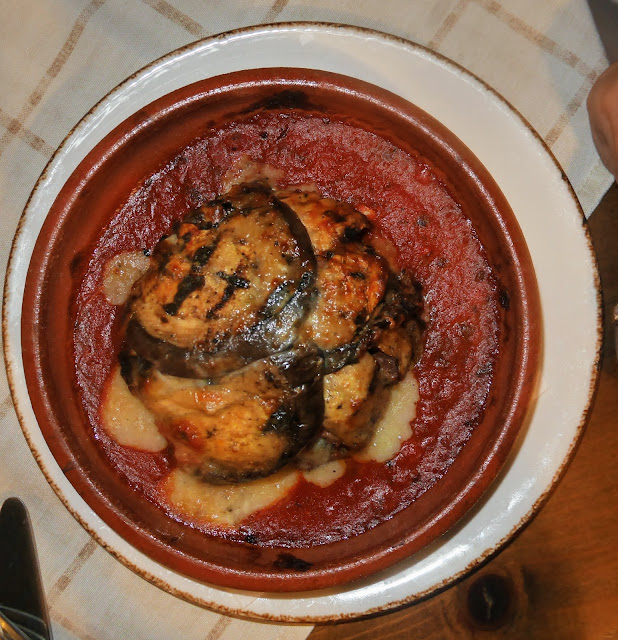 Aubergine with Veal in a Tomato Sauce 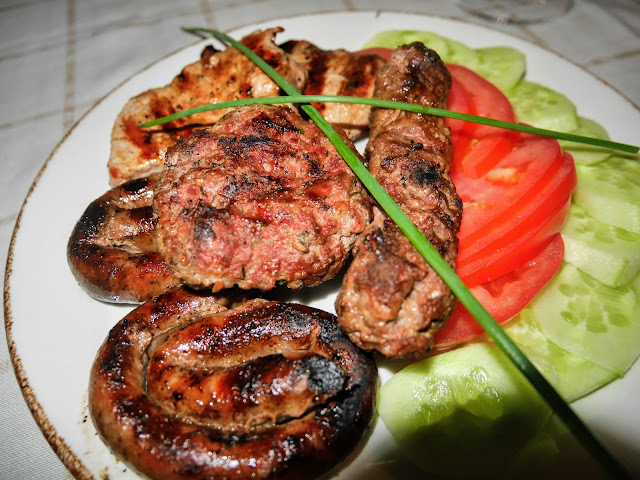 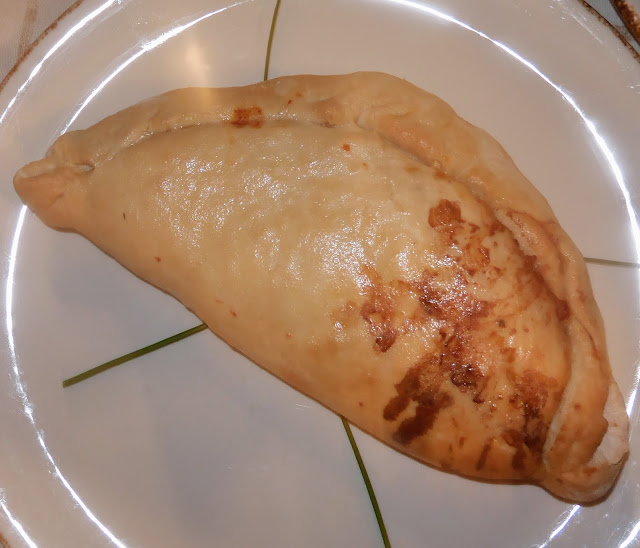 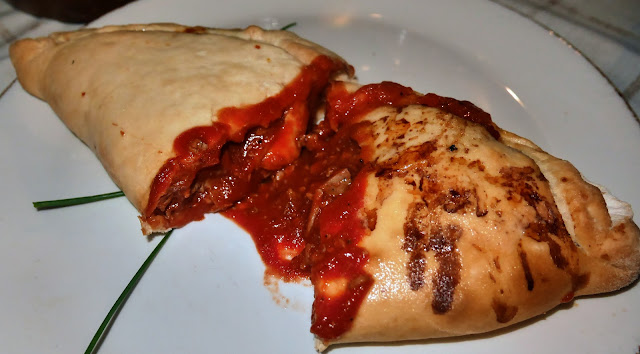 Disappointed by Pod Lipite the next day we did a little more diligent research. I had seen a restaurant named Grozd during our drive from the airport. This was walking distance from our Hotel so we set about to have a look. It looked great with some swish people having lunch. When we asked to make a dinner reservation, we were told that it was full for a party, and was full the next night too. Both of us immediately thought RAAAACIST! But all was not lost. A few doors down was our second choice Shastlivetsa. This restaurant has some 3 or 4 branches. In we walked to make a reservation for the evening, which we got.

Shastlivetsa was superb. An upmarket place with well-dressed locals forming almost all the diners.  The waiter was charming. He said the restaurant was not typically Bulgarian, and on our request steered us to what could be more Bulgarian dishes. The food was a quantum leap over what we had the previous evening. This was not peasant food; this was decent sophisticated food. The Dessert was superb. A Chocolate Fondant or Lava Cake except that instead of Chocolate oozing out you had an Orange Cream. An excellent meal and Shastlivetsa is fully recommended. Our meal cost LEV 113 double of the previous night but still an entirely reasonable INR 5500/- We were pleased. 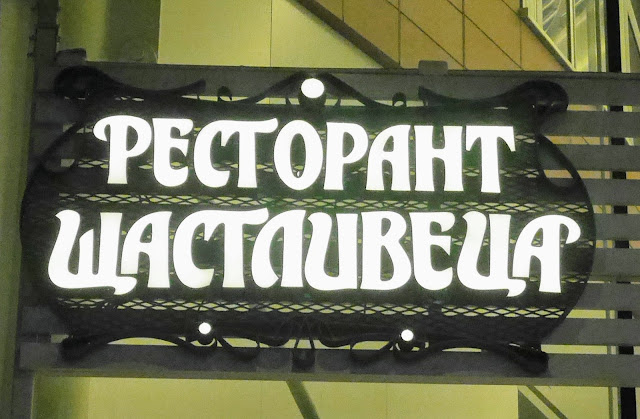 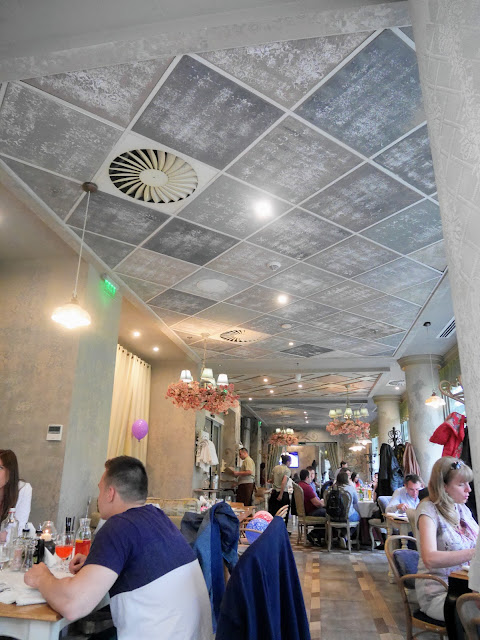 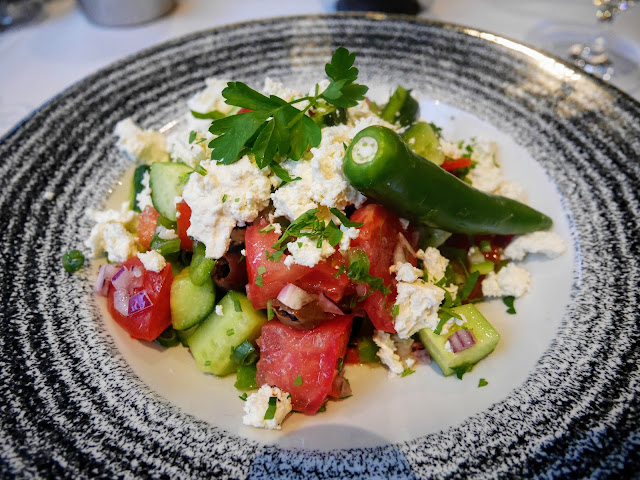 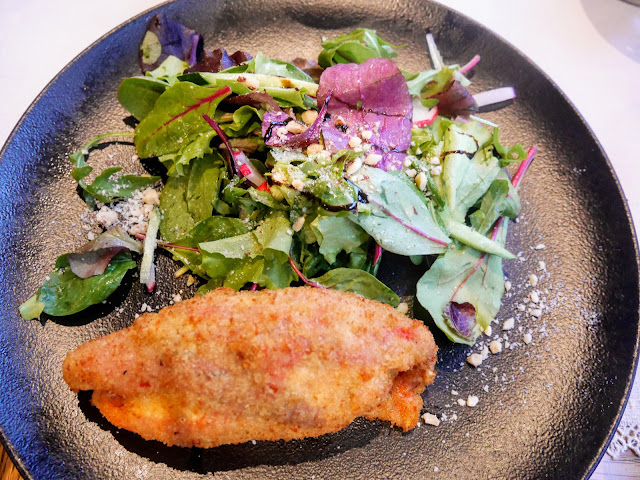 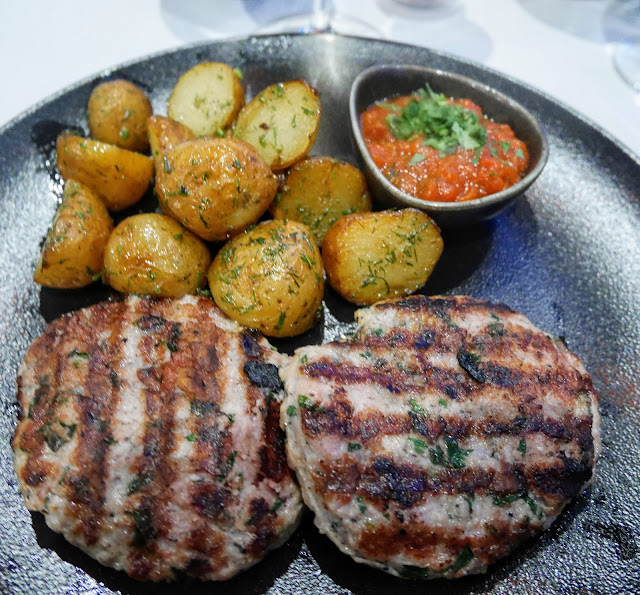 So called Meatballs. Once again very good and moist. 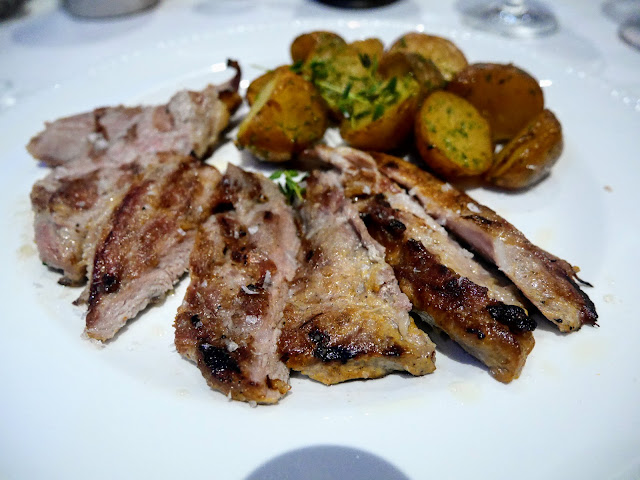 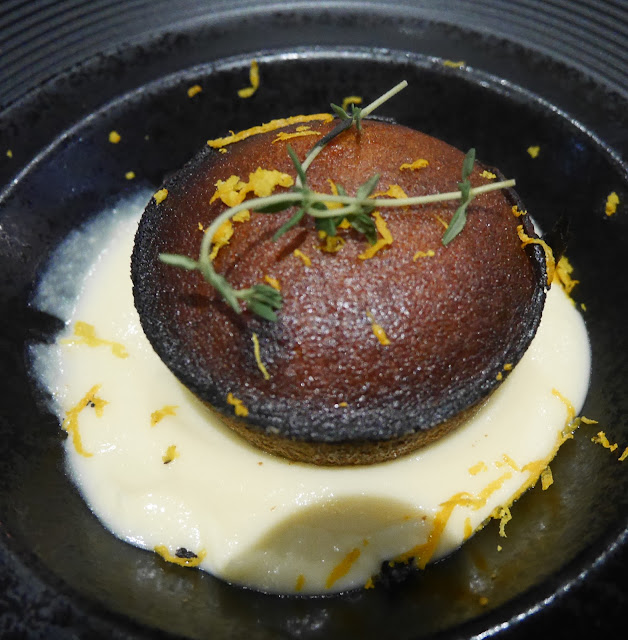 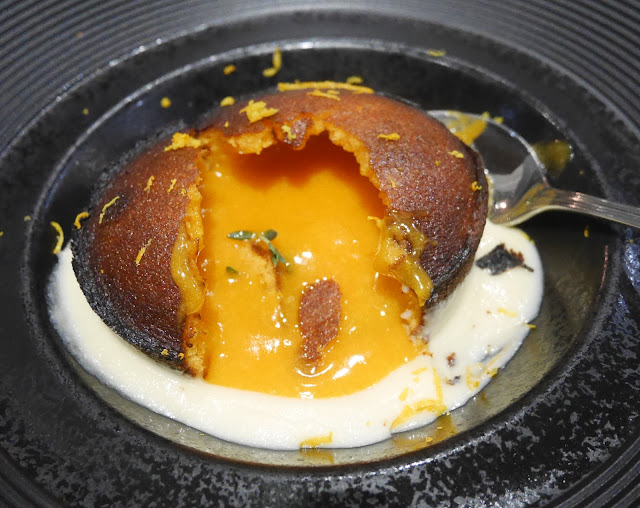 The last night was at Tavern Izbata located very close to our hotel. We had walked across to see it and being happy with what we saw asked the Concierge to make a booking. We did not want to get into a RAAACIST situation again. Tavern Izbata is in the basement and once again rustic. But the feel seemed far better than at Pod Lipite. The food served was exceptional. The dish of the day being the Veal Tongue, really good. While this food was rustic and Bulgarian, it is clear that it was a different kind of rustic. The presence of breads [“Tandoori Roti”] was new as was the bread with cheese. This was a most pleasant and enjoyable meal. We paid something like Lev 110 which again translates to INR 5500/- Well worth it. 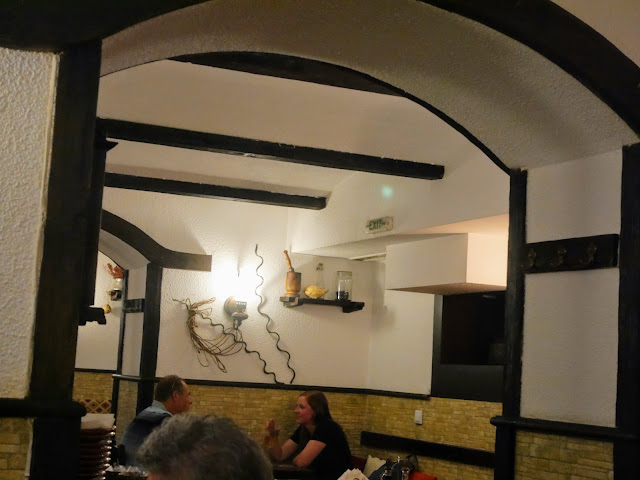 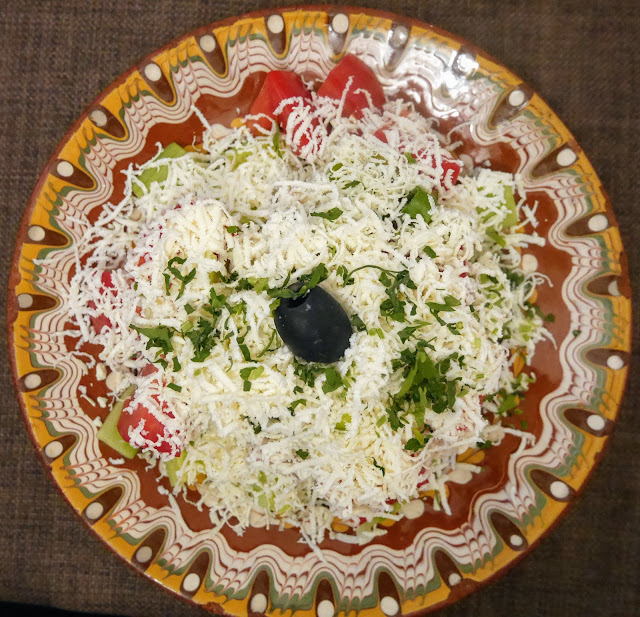 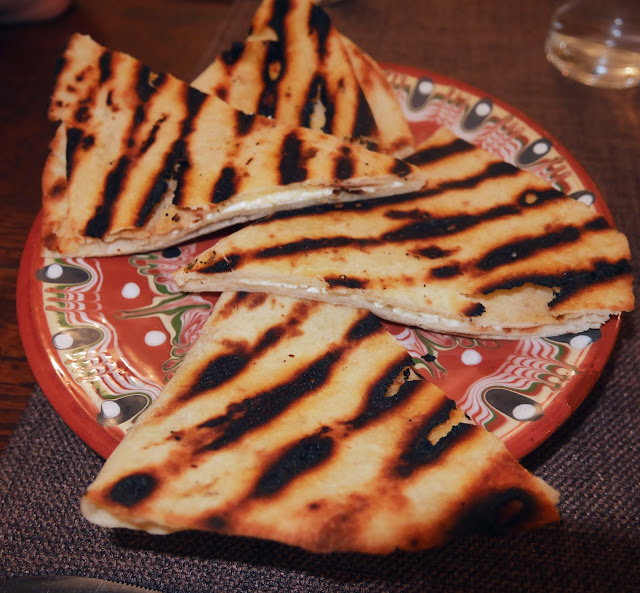 Local bread with Cheese. Similar to our Cheese Naan. 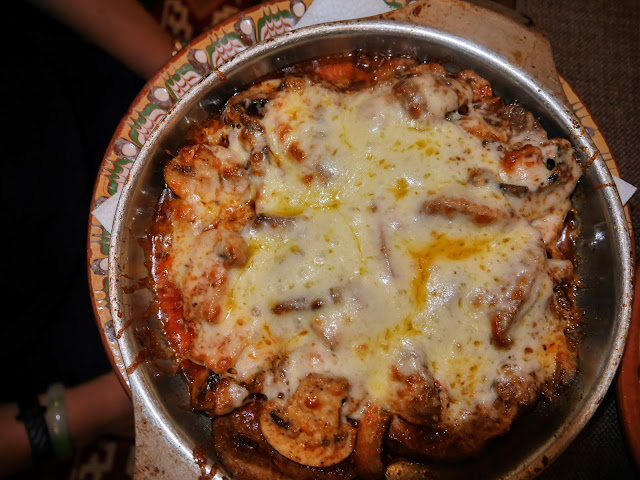 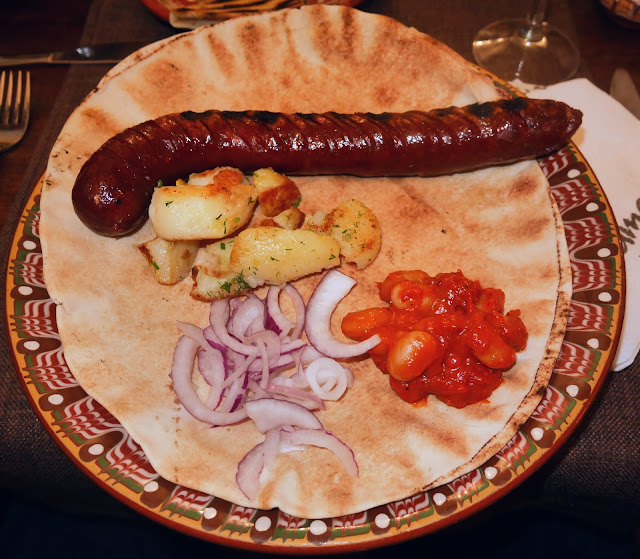 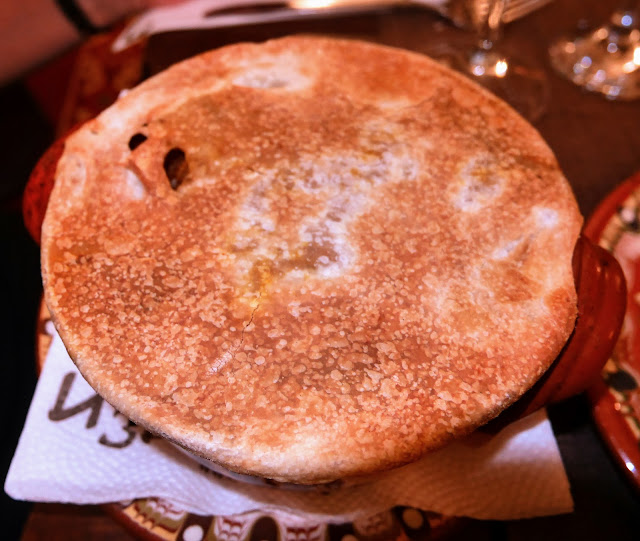 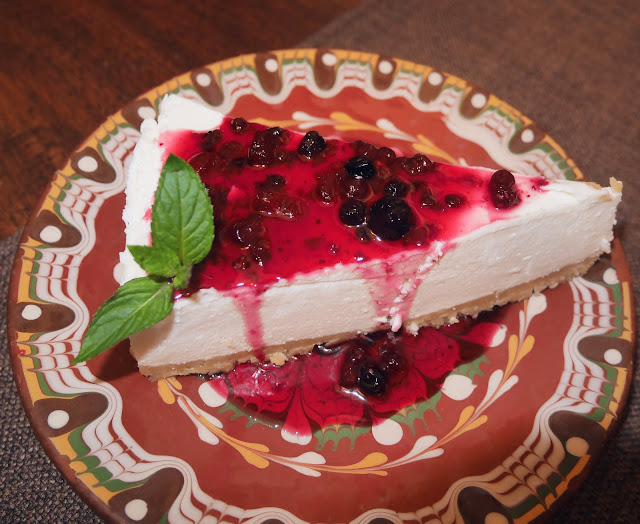 Honestly, I thought that food in Sofia was cheap, in fact much cheaper than in Mumbai. For the volume of protein served coupled with the wine it was certainly cheaper than Mumbai. The food is good and as I have written earlier quite unchallenging for Indian palates, very similar to Turkish food. We ate well.


Posted by Stonethrowers Rants at 8:25 PM