Over the years, you may have noticed that except for the series of posts in the May June 2014 period when (i) Modiji swept to power and (ii) we visited Japan, I have written very little about Japanese food.

Japanese food is a complex matter in more ways than one. First, I have never quite come to grips with the almost deific love for Sushi and its variations; Sashimi et al. They do not thrill me in the least. Secondly, I believe because of the hype around Japanese food in general, I find it disproportionately expensive. Every top restaurant be it French or Chinese, no different from the hyped Japanese, will serve you the freshest, rarest produce, sourced carefully, treated with care and reverence, and, most importantly, they will have applied some heat and actually cooked the food. So, the mystique surrounding the Japanese restaurant doing exactly that – albeit often not cooking the food, nor, as is often the case, even treating the food in any way - and charging super prices is simply incomprehensible to me. Thirdly, in Japan, generally, restaurants serve just one type of cuisine. A Ramen place will serve just Ramen, Sukiyaki or Shabu Shabu, just that, Sushi, just that, Tempura only Tempura, and so on. Mixed cuisine is generally served in what are is classified as Izakaya’s. Here you get a small selection of different foods – some Sushi, some Yakitori, some Tempura and bits and bobs of other styles.

In the Western world, most Japanese restaurants are in fact Izakaya’s. In London, Dubai and New York Nobu, Roka and Zuma are the favourites of us Indians. They are all Izakaya’s.

Umu a Japanese restaurant in Bruton Place has held 2 Stars in Michelin for some years now. This is an Izakaya. Araki a sushi place in London held 3 Stars in Michelin till a few days ago when it lost all its Stars as the chef moved back to Japan. We made a booking at Umu since we wanted to eat more than Sushi. 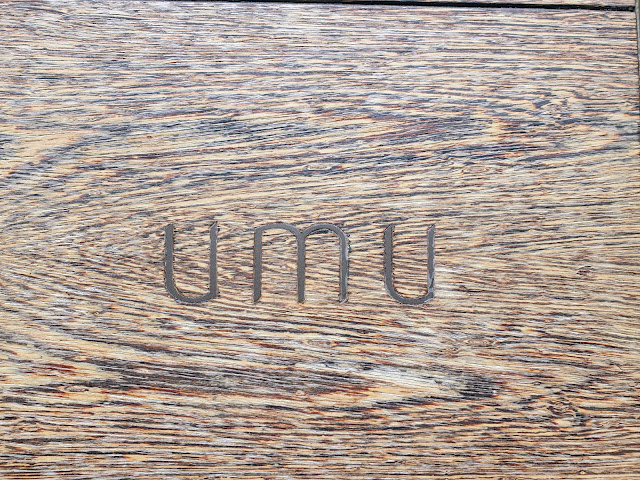 Umu prides itself on its Kaiseki cuisine. Kyoto is regarded as having the best Kaiseki cuisine. Kaiseki is a multi-course meal, showcasing the different Japanese cooking techniques. The dishes are served one at a time, similar to a Western style fine dining multi course meal. The Chef here is Yoshinori Ishil who is described on the Umu website as a Chef, Painter, Potter, Fisherman and Caligraphist. Sigh! The hype! 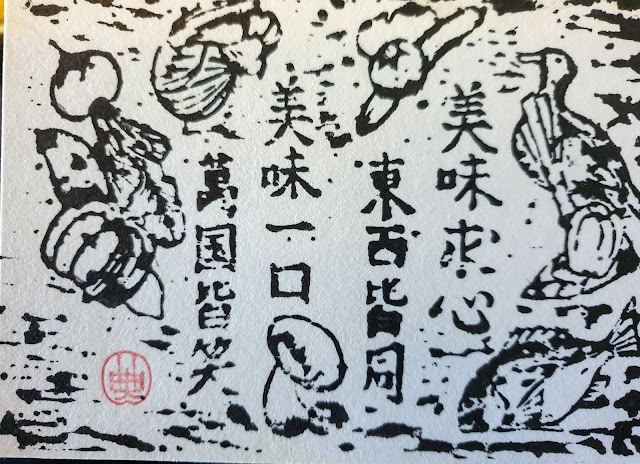 Above: The Calligraphy by Yoshinori Ishil. This paper was placed under a acetate/plastic sheet on which we were served some thinly sliced white fish. 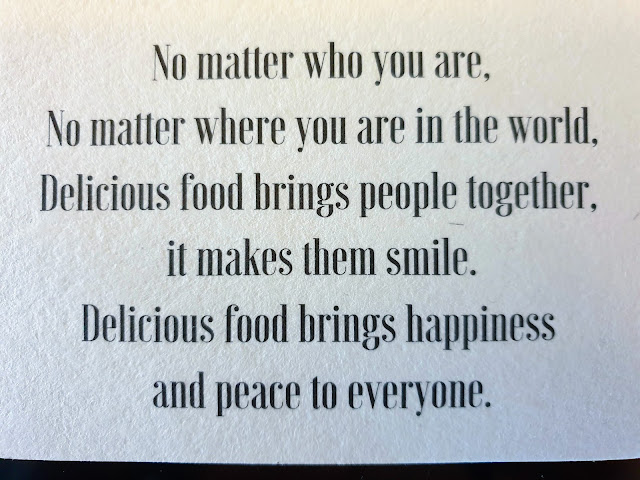 Our reservation was for 8 pm. We thought we should have a pre-prandial drink at the Guinea Pub next door to Umu. Umu, like many upmarket Japanese restaurants has a strong wooden door, which slides open, much like in a James Bond film once you place your hand in a separate receptacle. We were welcomed and coats whisked away and taken to our table. The restaurant was 50% full. A sushi counter ran along one length of the space while the tables were arranged on the outside of the “C” shaped counter. The staff was multi-racial as were the punters. Yoshinori Ishil stood stoically behind the counter and sliced away. A Caucasian Chef stood alongside and also sliced away. I am making no comments on “cultural appropriation” which I believe is a bullshit concept. Anyone can cook any cuisine.
We were handed our menus, enquiries made of our allergies and food requirements and given a Wine list by a French Sommelier. The Wine list had a large Sake selection, about which we know nothing. The Wines themselves, like the Sake were all priced in the 3-figure mark. I luckily found a Pouilly Fume Bardin 2018 which lurked in the list at a seemingly reasonable GBP 45. This retails at about GBP 15, so a 3X mark-up.

I must say that the staff was friendly. I pointed out that I cannot use Chopsticks and would like cutlery. The waiter of course brought cutlery, and also brought along a set of children’s chopsticks. You know the type that is hinged. No, I was not in the least offended. In fact I was quite pleased by this offer of children’s chopsticks. Of course, even these ended up being too challenging for me and I simply used the cutlery.

We had ordered the Kaiseki menu. I am not going to describe each dish. Have a look at the photographs of the menu and the food. 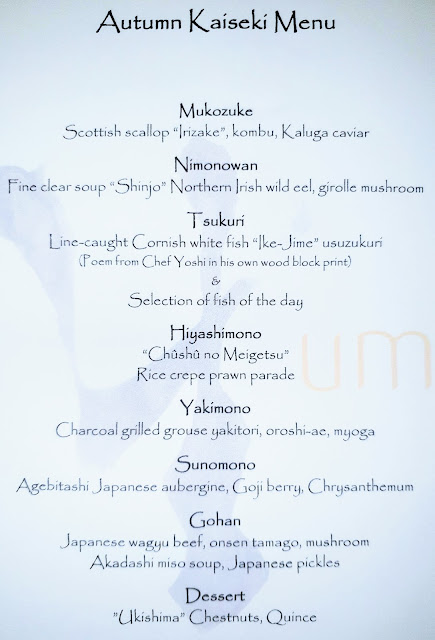 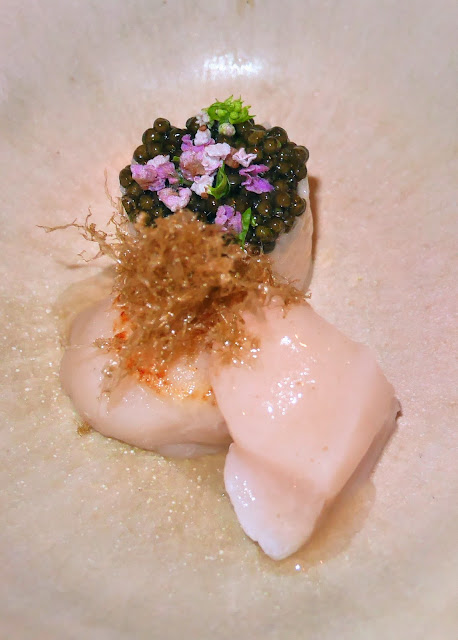 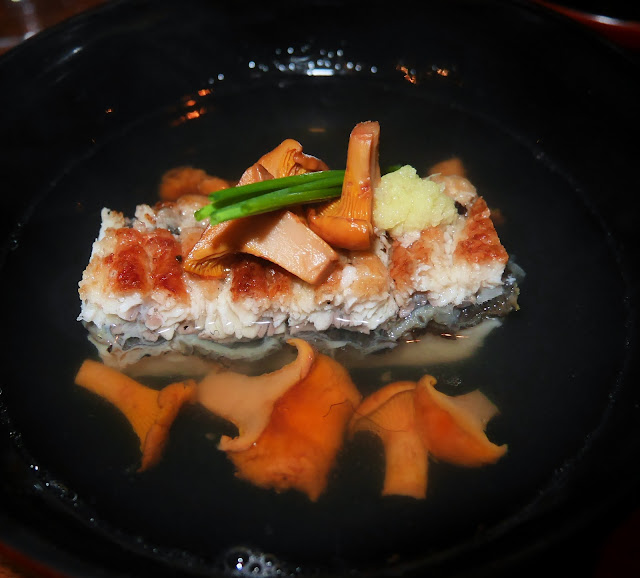 Above: Nimonowan. A hot clear soup, grilled Irish Eel and Girolle Mushrooms. Hot Dish No. 1. The hot soup was really clear. This was a good dish. 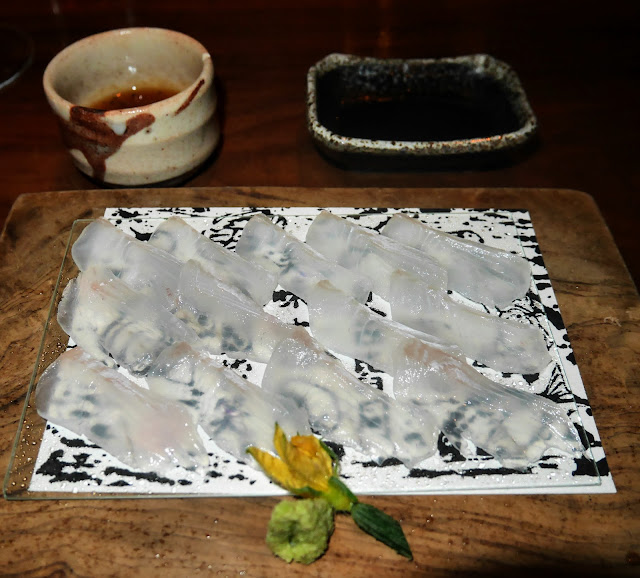 Above: Tsukuri. Part I.  Sliced Cornish white fish. Cold, raw, not marinated or treated in any way. Simply sliced. Served with a Chilli Sauce, Soy and a bit of Wasabi. Please note the Acetate/Plastic sheet under which is the wooden block printed Calligraphy by the Chef. 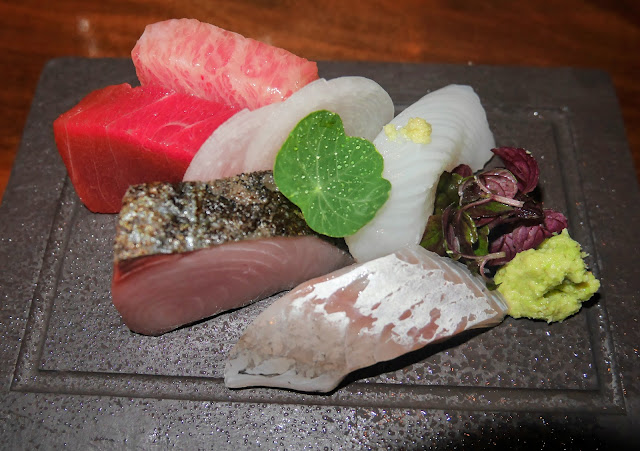 Above: Tsukuri. Part II.  This is a selection of the fish of the day. This dish is also served completely raw and un-treated with only Soy and Wasabi. The fish was excellent and you got a variety of textures and fat with each different fish. Served cold. 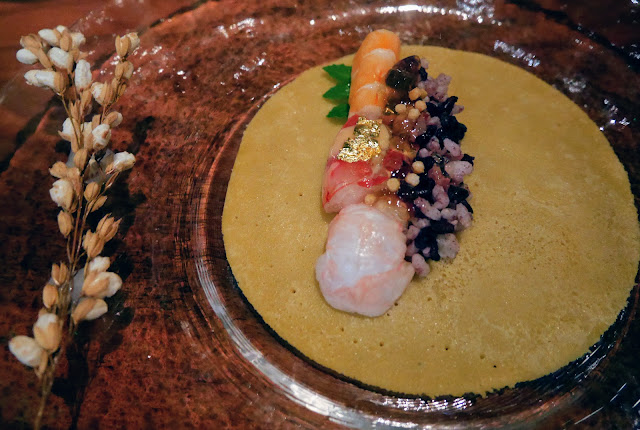 Above: Hiyashimono.  A Rice Crepe with three types of  Crustaceans. Served with white and black rice as well as literally popped or puffed Rice on the stalk. Once again cold. However the Crustaceans had been cooked. 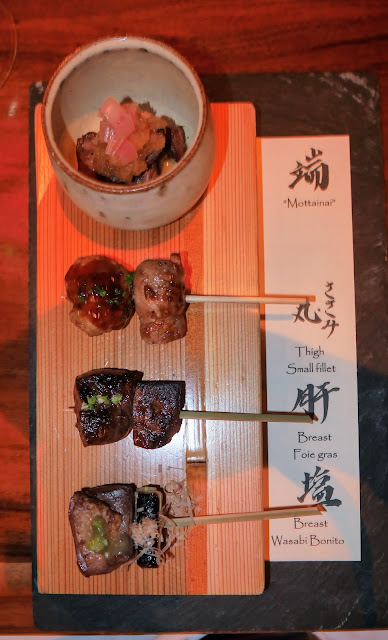 Above:  Yakimono. Yakitori 3 ways. I guess you can see the labels. Hot dish and actually cooked. 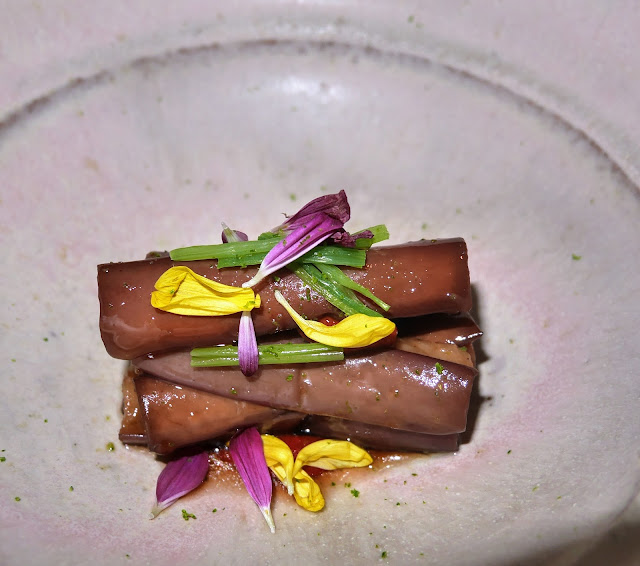 Above: Sunomono. Agebitashi Japanese Aubergine. Agebitashi means soaked or marinated [normally in Dashi] and then fried. Cooked but served cold 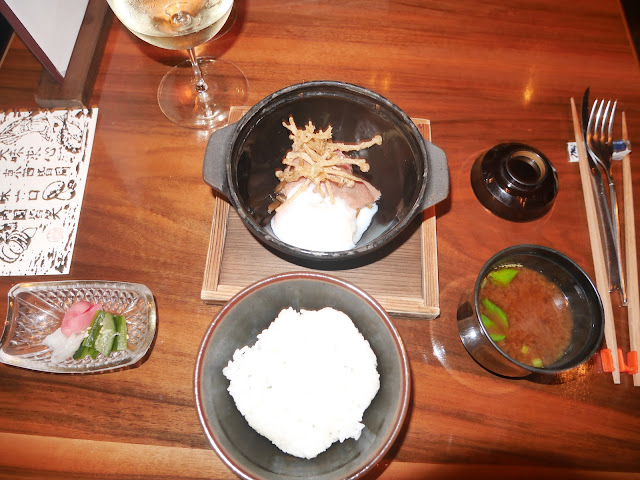 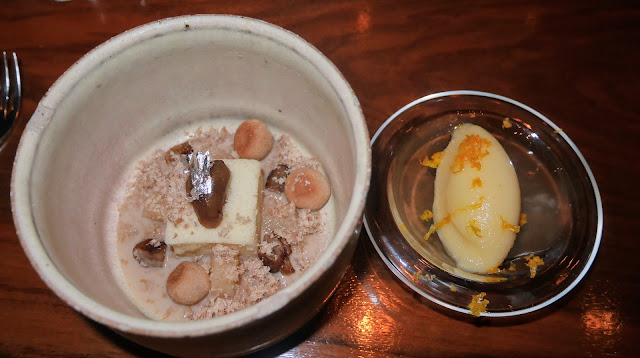 Above: Dessert. Chestmuts and Quince. Very indifferent. Typical of desserts from the Far East, pretty clueless. 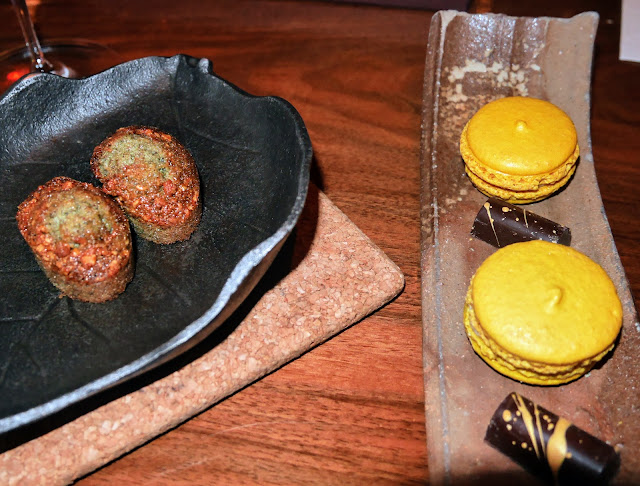 The food was obviously of a high standard. This is a restaurant that has 2 Stars in Michelin and has “excellent cooking that is worth a detour”. I am not so sure about the cooking bit! Out of the 8 courses we were served, just 3 were warm. 2 courses were not even cooked as in no heat had been applied to them. This is my problem. Japanese food, even of this high standard, if you pardon the pun, leaves me cold. I do not understand it, I do not particularly enjoy it. I guess that like many Indian’s simply cannot enjoy food that has no chilli, I am not fond of cold food. Of course, I can eat a sandwich or ice cream but, I hope you know what I mean here.

I am not complaining about the small portions, which is often something people gripe about when eating high end Japanese food. We were full, there was a lot of protein in the meal.

Then, there was another problem. The fellow diners. I repeat, Umu has 2 Stars in Michelin. We believed that the restaurant would have well-dressed diners. Nope, we were wrong, horribly wrong. I was the only one in a Suit. Along us were Oriental diners dressed in shirts and jeans. Behind us on the Sushi counter were Caucasians in hoodies [with the hood lowered thankfully] sneakers and jeans wolfing down Sushi. Very disconcerting. To make matters worse, a fellow diner proceeded to fall asleep on the sofa. Pathetic. 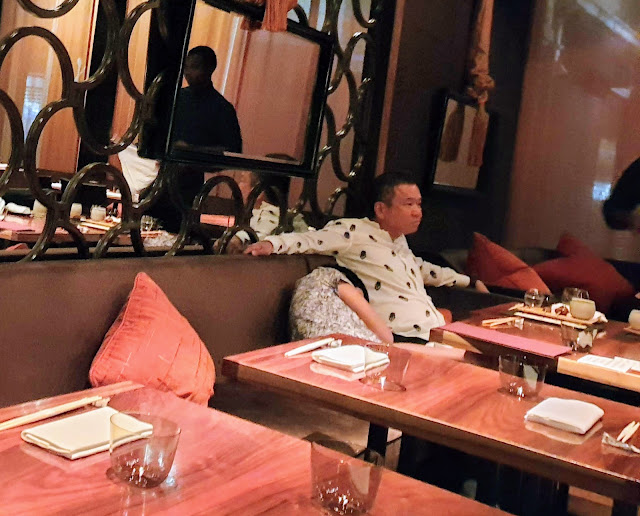 To my mind this raises the question as to what really Michelin looks at when grading restaurants. It is certainly not Umu’s fault for getting 2 Stars in Michelin. This is clearly a Michelin issue. Surely, when reassessing the restaurant, the inspectors would have seen that the ambience does not befit its rating.

To look at this from a different perspective, Le Gavroche, Bibendum by Claude Bossi, Core by Clare Smyth, La Dame De Pic, Ledbury, Helene Darroze and Dinner by Heston Blumenthal are also restaurants with 2 Stars in Michelin. I can assure you these places have a far far superior ambience to Umu.

In the end we came away disappointed at the overall experience and left feeling underwhelmed. In my view, yet another example of over hyped, over intellectualised cuisine.


Posted by Stonethrowers Rants at 7:51 PM