As you may know, both The Queen of Kutch and I do like French food. Carefully cooked meats and fish, rich sauces reduced to enhance taste and mouth feel, delicious desserts all washed down with a decent wine. Unfortunately, you do not get French food in Mumbai. Maybe, a dish or two at the newly opened Hemant Oberoi at BKC [we have not been there] and possibly a dish or two at a Five Star Hotel. For a variety of reasons this cuisine has all but disappeared in India.

So, when we travel to Europe we try and eat as much French food as possible. For us even the now staid or classic French dishes like Pates, Rillettes and Terrines, Escargot with Garlic and Parsley Butter, a Soufflé, Steak Frites, Moules, Fish Meunière or Grenobloise, Steak Tournedos, Tarte Tatin or even a simple Roast Chicken are sought out, meals planned, restaurants booked and food eaten.

One day I read about an unusual French restaurant at Grays Inn Road in London. Grays Inn Road is in the `City’ and haunted by lawyers. This was called Otto’s French Restaurant after the German owner Otto. Otto started life as a waiter and rose to be Maître’d at several well-known restaurants till one day he started Otto’s. The restaurant was very highly rated by critics.

The A La Carte Menu seemed classic, with dishes from what I have written earlier. Have a look at the menu here.However, what caught my eye was the fact that as a special he offered a Pressed Duck or a Pressed Chicken or a Pressed Lobster and a special Poached Chicken. Now this was indeed unusual food for several reasons.

First and foremost the Duck and Chicken he offered were really the Gold standard of produce. The Chicken was the famous Bresse Chicken which has Appellation D'origine Contrôlée [AOC] status. It may be produced only from white chickens of the Bresse breed raised within a legally defined area of the historic region and former province of Bresse, in eastern France. Needless to say there are precise methods for raising and slaughtering them. The chickens are regarded as the finest table chickens and used by top chefs. The chicken has a distinctive blue colour on its leg.

The duck used is equally good. Otto’s uses only the famous Challans duck bred by an equally famous producer Brugaud. These ducks are also AOC and are truly free range. Their wings are clipped and they are allowed to roam free. Thus, these ducks have a more gamey flavor as they forage and eat everything from the fields. They also have less fat unlike the ducks that are bred for Foie Gras.

The Lobsters that are obtained by Otto’s are magnificent. I have never seen creatures of this size. The lobsters are about 65-70 years old [so informed Otto, and they live to about 100] and are huge. Each lobster weighing about 2 to 2.5 kgs. That is massive.

So while on the one hand the produce is superb, a pressed duck is really a classic old style dish that is rarely served today. A Parisian restaurant La Tour dArgent is supposed to have started serving pressed duck sometime in the 1890’s. Every customer who was served a duck was presented with a certificate with the birds serial number. There are very few Duck Presses in existence today. The famous French silversmith Christofle made a few pure silver Duck Presses and two of these are at Otto’s. Beautiful to look at and must be worth thousands of pounds today. Getting a chance to eat Pressed Duck was not something we were going to pass up on. 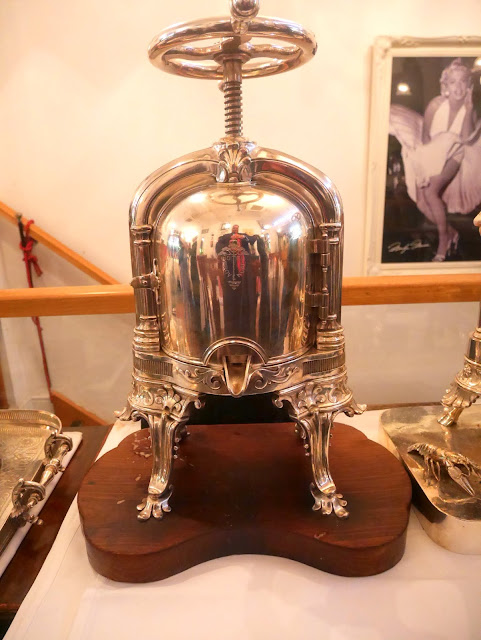 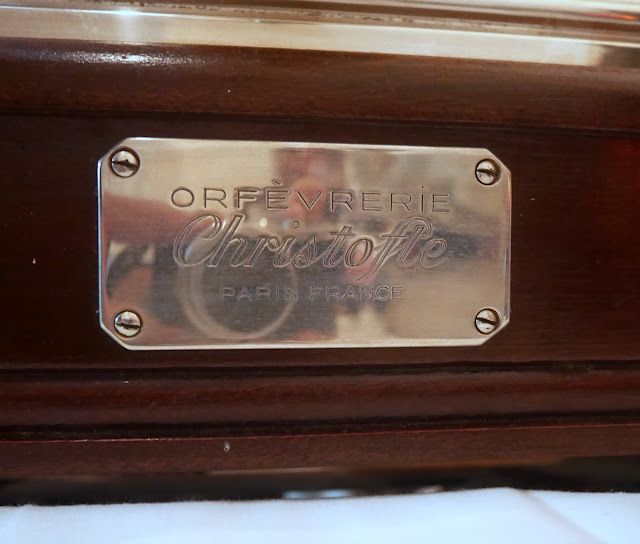 As is our wont, we had made reservations from Mumbai as soon as our plans were finalized. The restaurant needs you to reserve your animal [if you are having a special meal] and give in your credit card details. This we decided to do after we were in London. When I called and reserved the duck we were told that we would have to come for dinner at 6 pm as the duck meal took time. 6 pm, I groaned inwardly, that is the earliest we have eaten dinner. Seemed so bloody American.

Anyway, we dutifully turned up at 6 pm and were welcomed by Otto himself and seated. In front of us was a trolley with a wooden cutting board and two beautiful Silver presses, one for the poultry and one for the lobster. Otto explained that this was to be an interactive meal and that I would have to not only work for my dinner but would have to be quick in my photography. We ordered a couple of Negroni’s which were delicious and strong.

While waiting I ordered a Chicken Consommé which was classically prepared with little Chicken Dumplings and vegetables. The soup was then covered with Puff Pastry and baked. This was fabulous. HRH the Queen of Kutch decided to not have the starter.

Then the Duck was brought out. A beautiful and large duck. How this meal works is that a sauce is prepared tableside. The Duck Liver is removed, chopped added to the sauce to flavor the sauce. The liver strained out and served on Brioche. The Duck meanwhile is roasted in the kitchen and brought out. The breasts are removed and kept aside. The legs are removed and sent back into the kitchen to be cooked. The legs take far longer to cook than the Breast. The carcass devoid of the breast and legs is then chopped and put into the Duck Press which I was invited to turn. Amid much hilarity and commotion, while a Viking helmet was placed on my head, in a sort of cruel mediaeval torture ritual, I turned the wheel on the press. The duck juices and blood flowed out of the spout and were collected. These juices added to the sauce and further reduced. This enriches the sauce. The Breast was sliced and the sauce poured over and served. Then as a third course, the legs which have by then crisped up are served with some crisp duck skin and a salad. 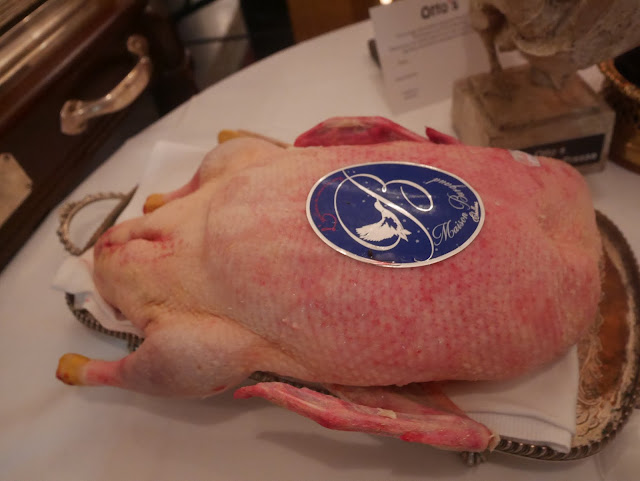 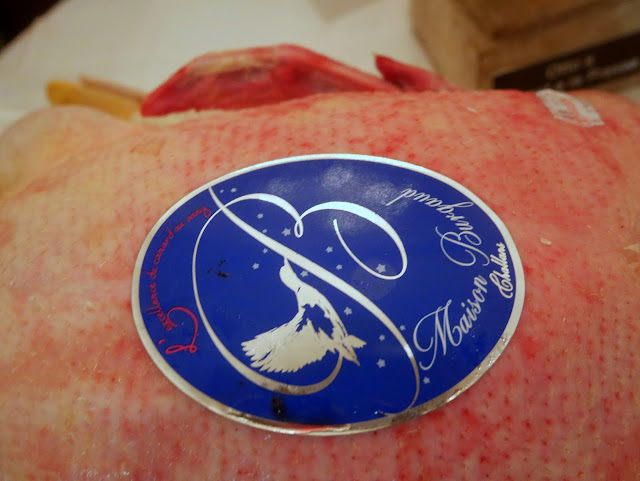 All this is quite a process and while it is being performed there is much theatre in the dining room. Much tableside action with the flambéing of the duck, and the sauce, carving of the duck and pressing of the carcass. All this is done by the charming Otto who maintains unfailing enthusiasm, charm and good humor despite having done this for 6 years several times a day. 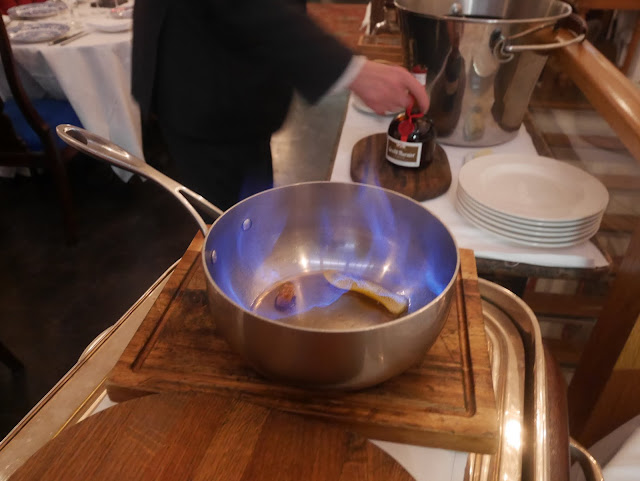 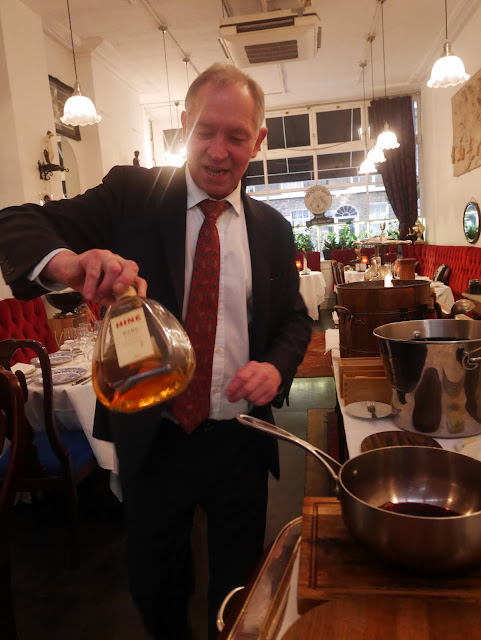 The Duck liver on Brioche was served up first and to accompany it we got a glass of sweet wine. The wine and the Liver was a fantastic combination. 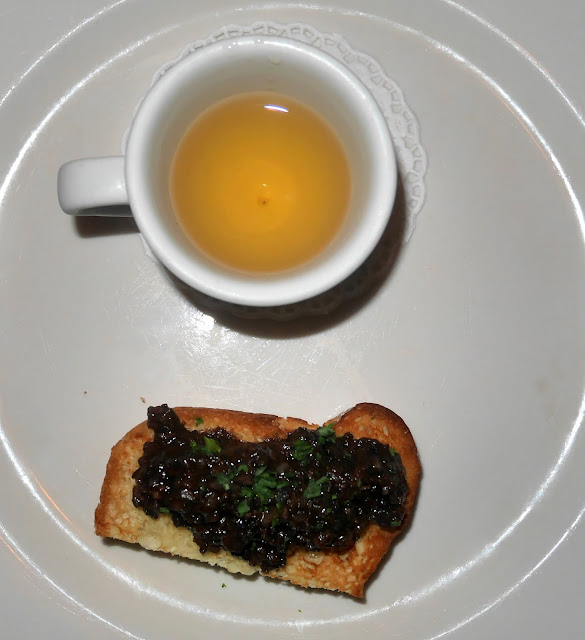 The Duck Liver with Brioche and Sweet wine

Next up we had the Duck Breast with the by now flambéed, reduced sauce enriched with Duck Blood. Absolutely fabulous. No doubt about it. This was served with Pommes Soufflé which is another classic old world French potato dish. This is basically a wafer but the wafer is puffed up like a Poori. Cooking this requires not only a specific potato, cut to precisely the correct thickness, and careful cooking, twice, I may add. Pommes Soufflé are not easy to make. 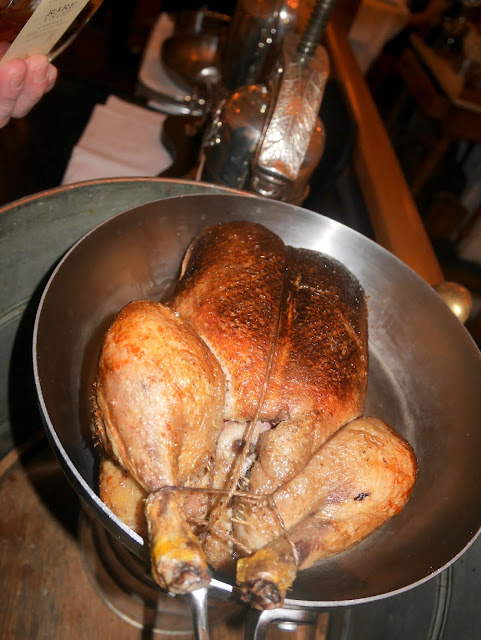 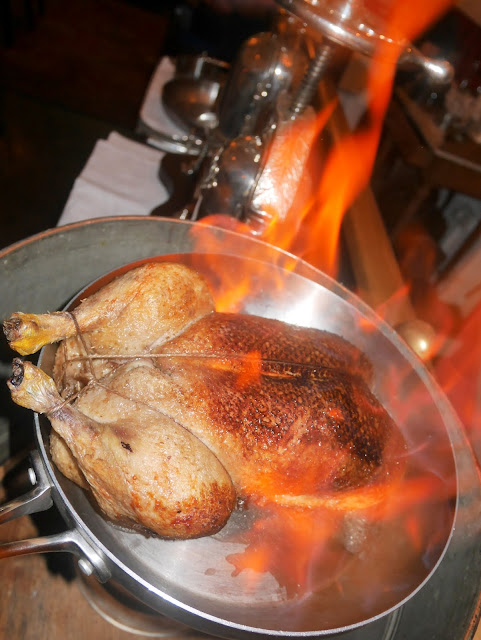 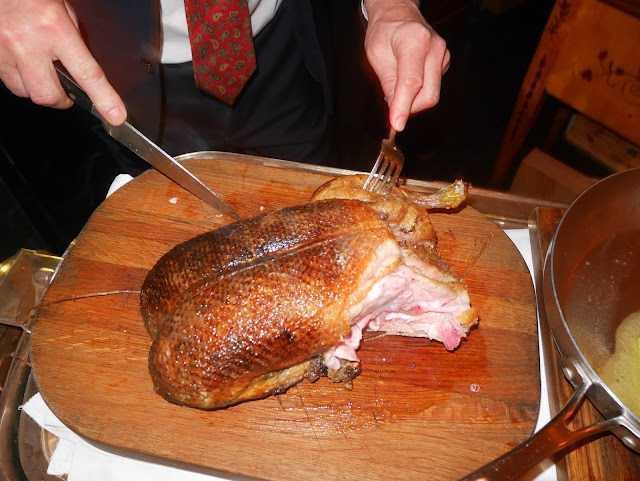 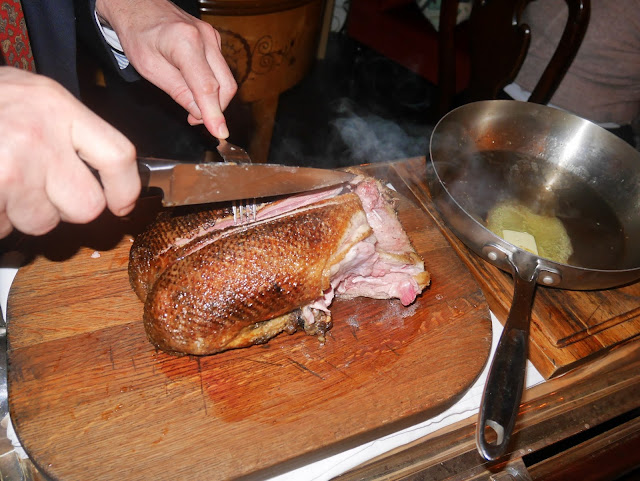 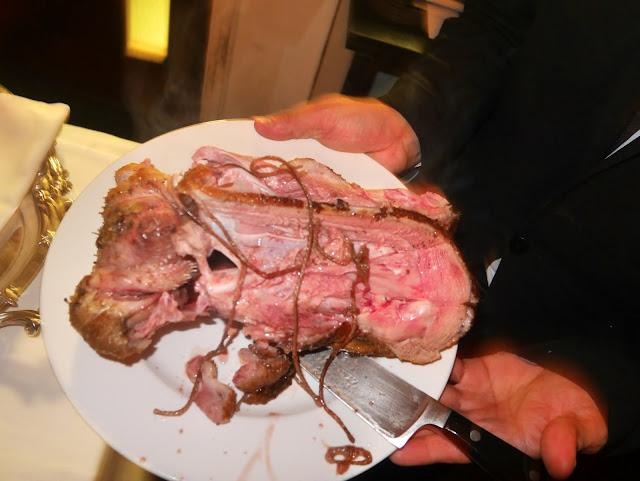 The Carcass after removing the Legs and Breast 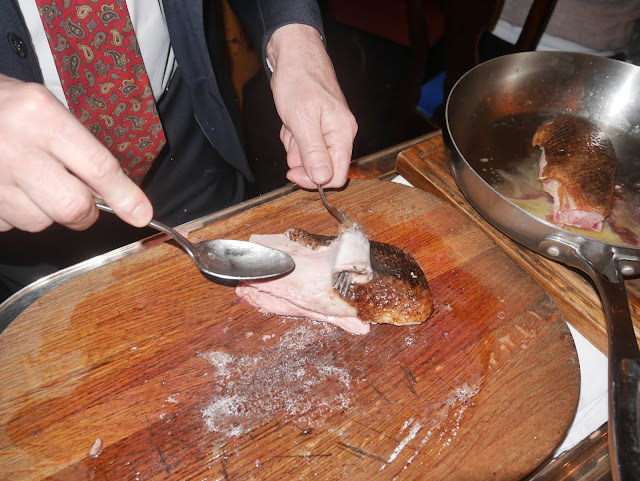 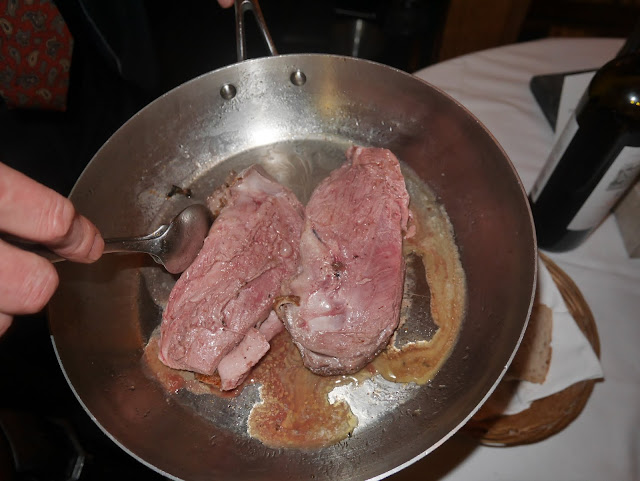 The Breast being lightly cooked 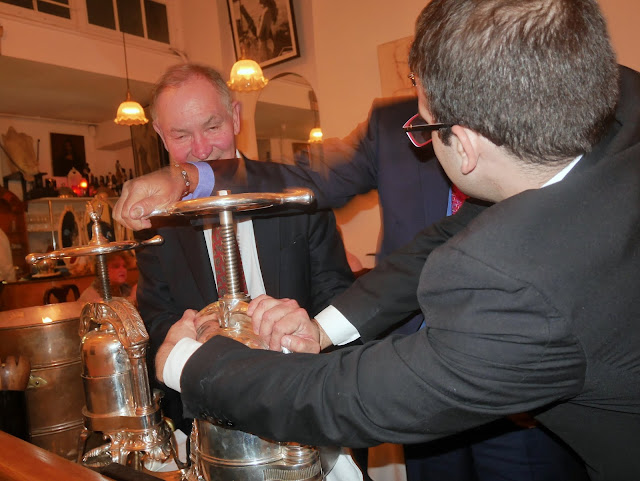 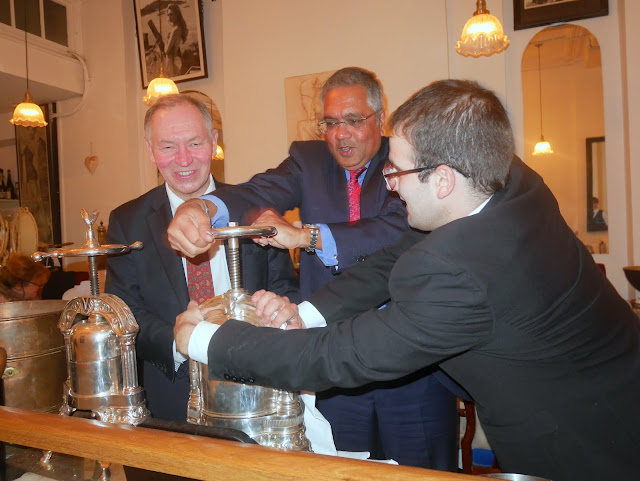 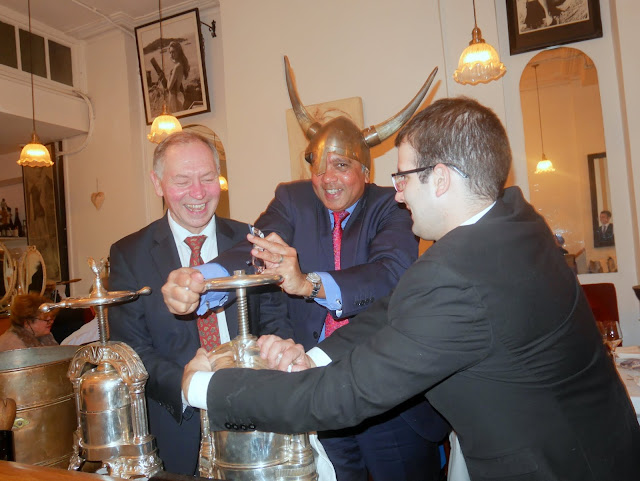 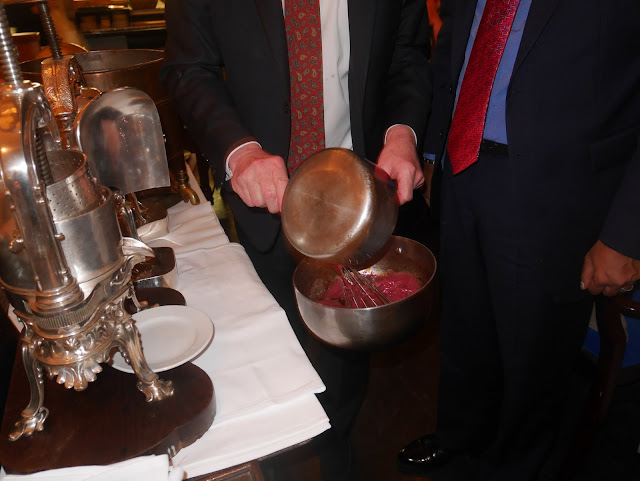 The Duck Blood being whisked into the Sauce 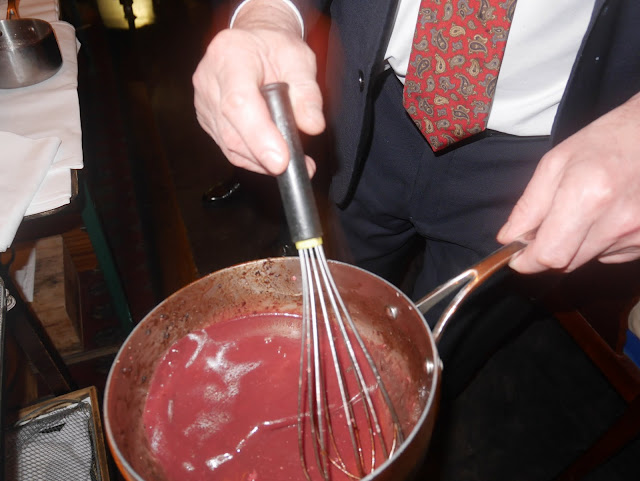 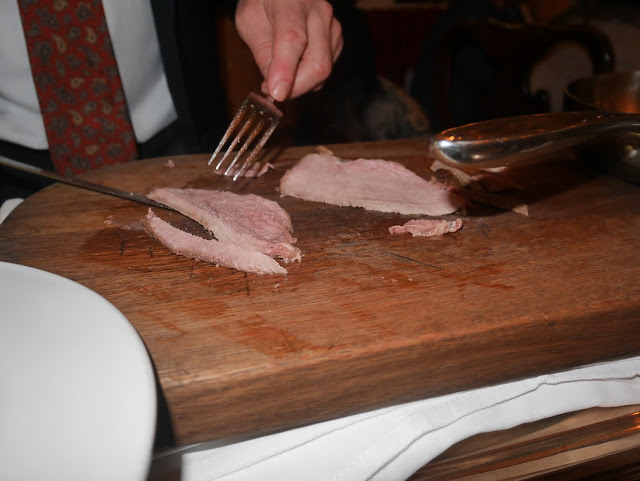 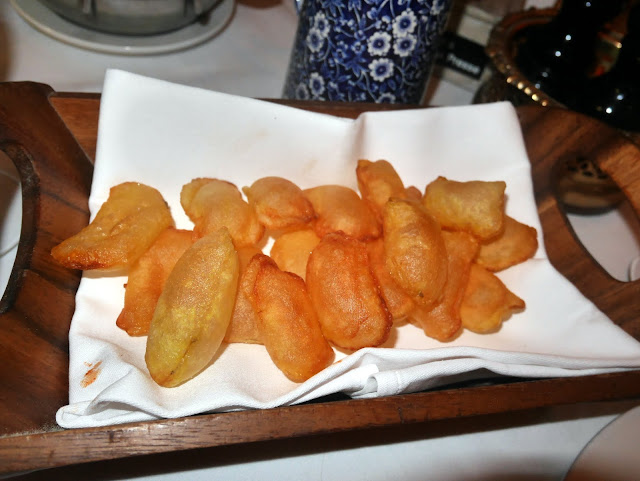 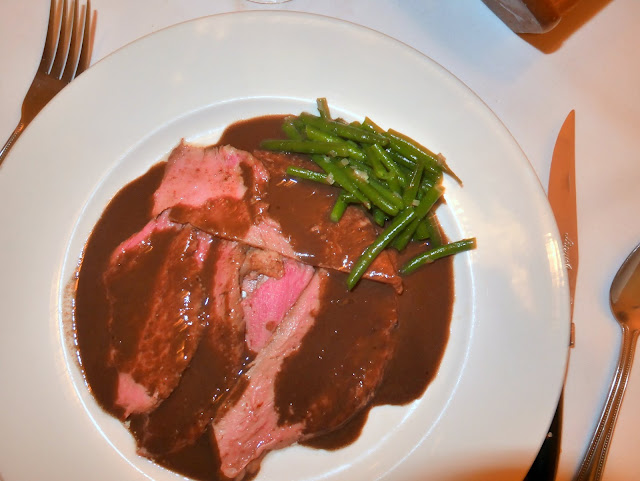 The finished Breast with Sauce

Then the Duck legs were served. Unfortunately, they were overcooked and dry. Pity. We ate just a part. The salad was well dressed with a punchy dressing and the crisp salty duck skin complemented the salad. 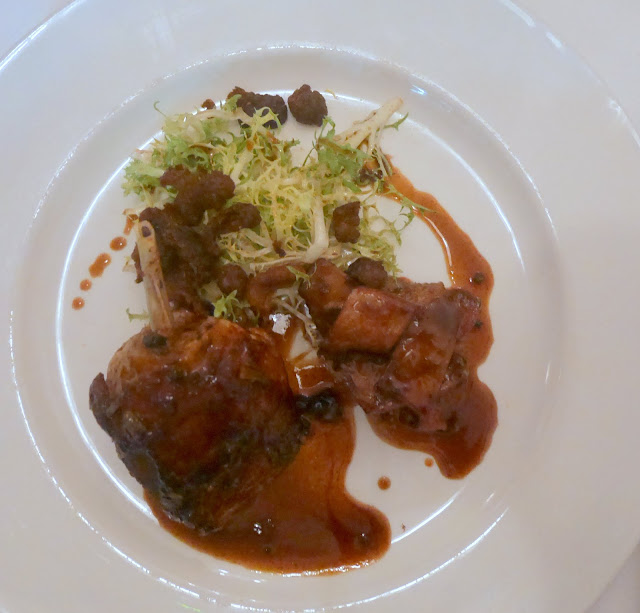 While we were having our duck, the next table of 4 [two lawyers and wives] had ordered 2 lobsters. They went thru the process of pressing the lobster carcass. The lobster meal itself is equally delicious. First you get the Claws with Scrambled Egg and Caviar, a classic match. Then you get the Lobster tail served with a Lobster Bisque enriched with the juices of the pressed lobster carcass. Sounds fabulous. Then there was a third table of 6 with 3 ducks on order. It was indeed a busy night for Otto. Mind you there was a large table that was having A La Carte and not the specials. 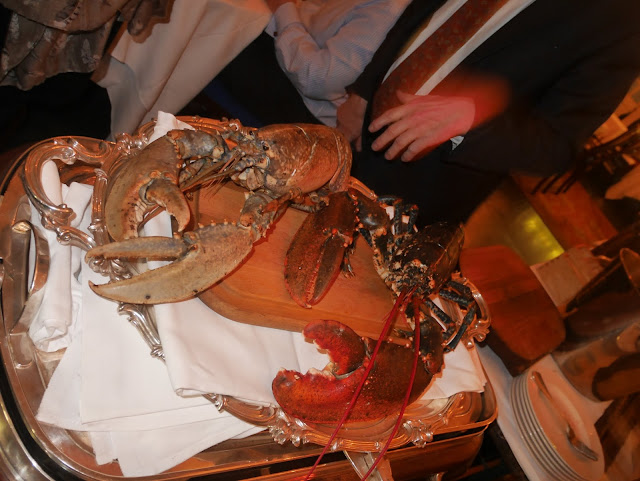 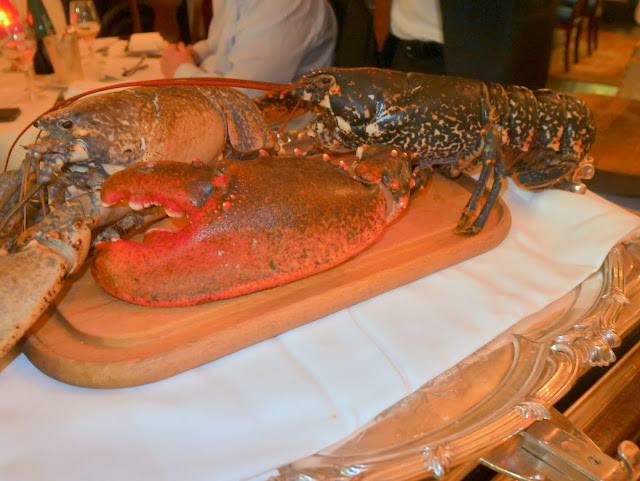 Otto insisted that we have a dessert which he said were very good. So we ordered a Peach Tarte Tatin and a Cherry Mousse in a Brandy Snap Tuile. Both dishes were excellent. 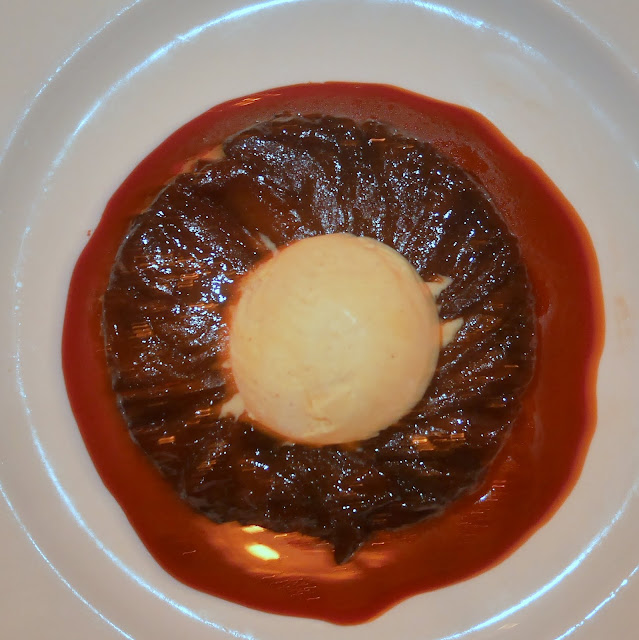 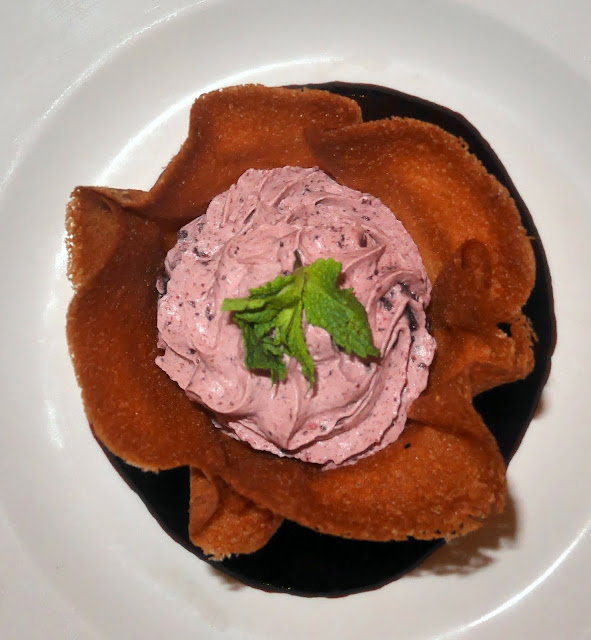 Meanwhile, Otto continued the banter, with all of us agreeing that he needed a vacation and that he should go with us to Goa.  The evening ended at past 10 pm. We had a 4 hour meal with not a moment of boredom. All in all a good meal and lovely experience. The next time we go to Otto’s we will probably have the A La Carte. Fully recommended, without hesitation.

Posted by Stonethrowers Rants at 10:09 PM