We were in Cannes for just two nights. One night was to be dinner at Palme D’Or which has two stars in Michelin. The chef in charge of Palme d’Or is the very charming Christian Sinicropi who hails from Cannes. His trade mark is a Pista Green Chef’s Jacket that he wears. We had made the reservation well in advance, especially having seen the restaurant and Chef being featured in an episode of a Netflix show whose name escapes me. Palme D’or is located in the Martinez Hotel, so we thought that the rich and famous would have made dinner plans too.

Our table was for 8 pm. For once we had no commute to reach the restaurant, no timing the walk with HRH the Queen of Kutch wearing high heeled shoes. No taxi to hail and traffic to negotiate. Just a simple ride down the elevator. In these circumstances what better to do that visit the bar downstairs. Which is exactly what we did.

Gins were a speciality of the bar. How delightful. A large collection was on display with a selection of tonics. A Japanese Gin called Roku to start with, then a French Citadelle. Just right after a hot day. The bar is located on the street level overlooking the Croisette. Very pleasant. Friendly bartenders speaking in passable English. Then it was getting to be dinner time. So off we went. 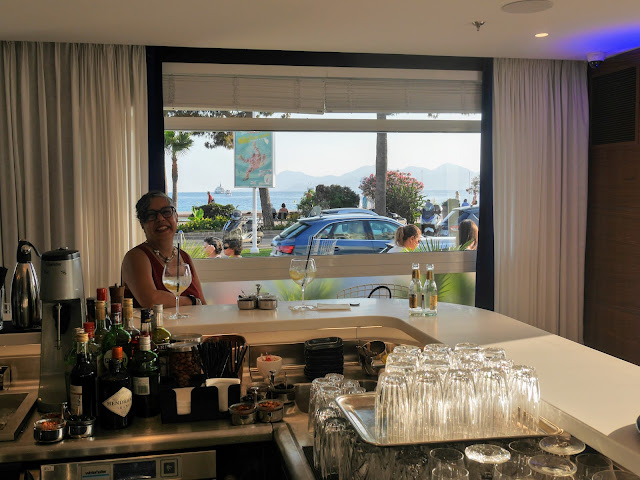 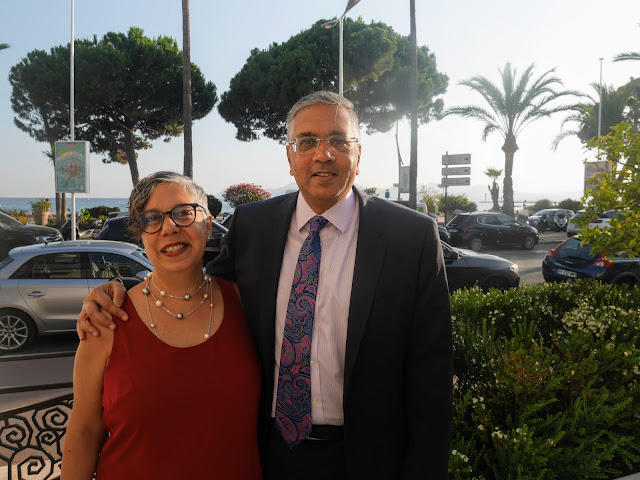 Restaurant Palme D’Or is on the first floor of the Hotel. A large restaurant, without air conditioning with a large frontage. The front overlooked the Croisette, naturally, and since you were a level up, you had a very good view of the beach and the Mediterranean Sea. Tables were large and well-spaced. Our table was right at the at the front overlooking the Croisette and beach. Very exciting. We were seated and enchanted by the view. Being summer, it was still very bright. As the evening progressed it became twilight. 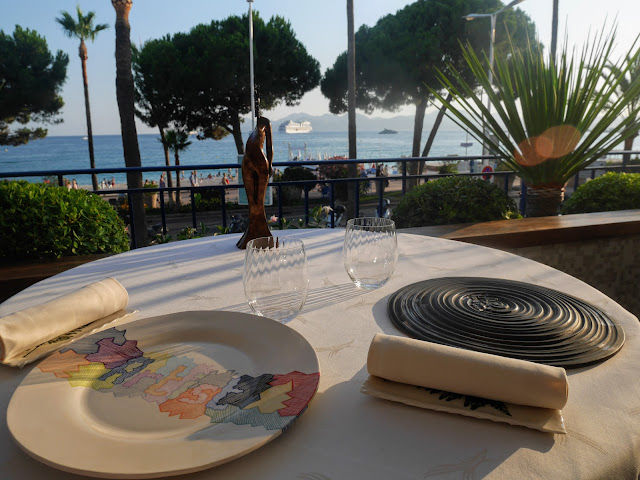 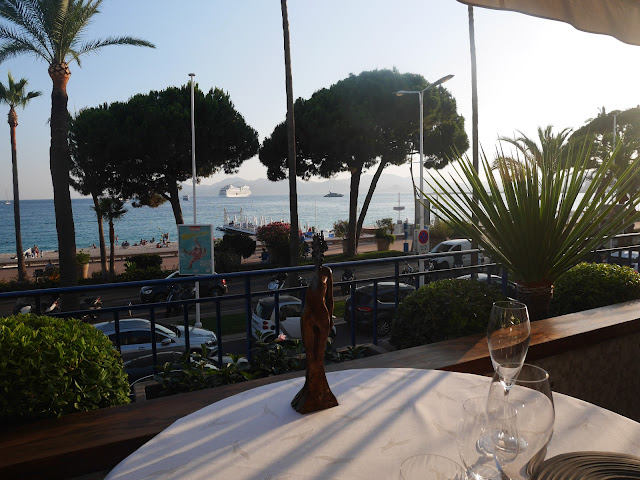 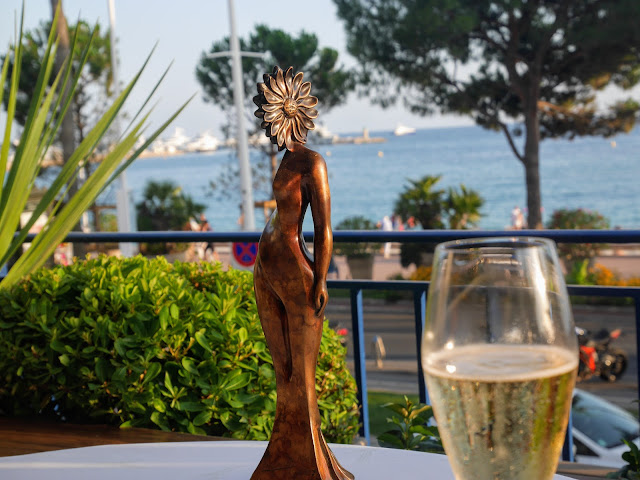 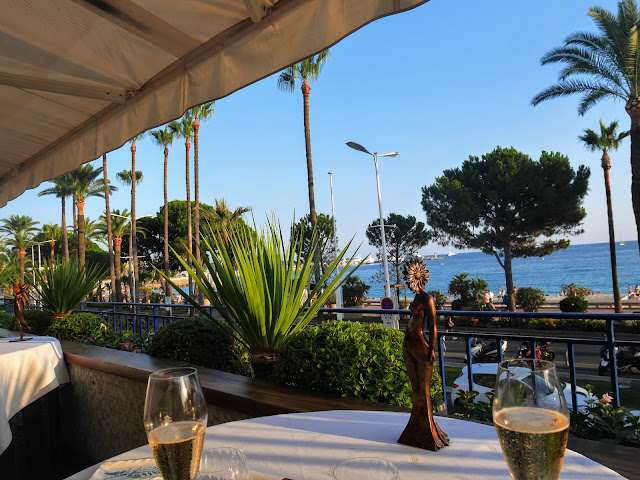 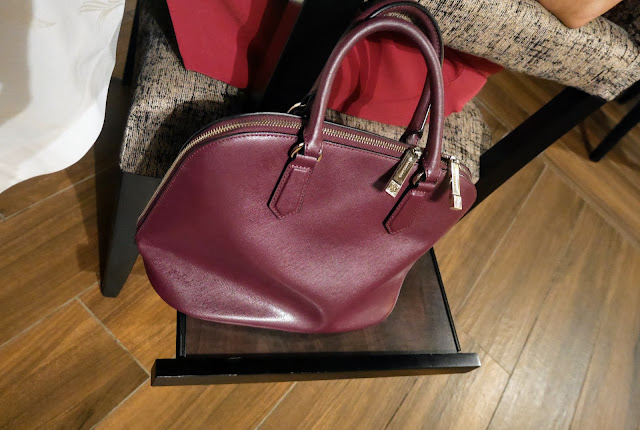 To get us settled in Champagne was ordered. Cold, refreshing and celebratory. The usual questions were asked, are you allergic to anything? Is this a special occasion? And menus handed out. Handed out is wrong, they were placed on the table. The menu was a 6-sided square, like a dice, there were also two additional pull-outs. The 6 sides of the dice signify the 6 movements. The 6 movements or themes were (i) vegetable (ii) Prawns, Langoustines i.e. Crustacea (iii) Lamb (iv) Beef (v) Oyster (vi) South, my roots i.e. food from the Riviera. The 6 movements are nothing but 6 principal ingredients cooked in 3 ways. The first is a to create a plate of textures, the second is to cook the ingredient in a modern interpretation and the last is to cook the product, un adorned, simply, typically. The two additional menus were an A La Carte, and a Tasting.

I ordered the A La Carte which had 3 courses, obviously, and HRH the Queen of Kutch ordered one of the Movements – South My Roots. I am not going to describe the food. The photos and their description tell it all. The food without exception was top notch. Everything accurately cooked with enormous skill and technique. What was supposed to be hot was hot.

The Canapes were really quite something. We both felt that the liquified Olive with chilli was genius. Also good was Barbajuan a speciality from next-door neighbour Monaco, which is a fritter made with Chard and Ricotta. 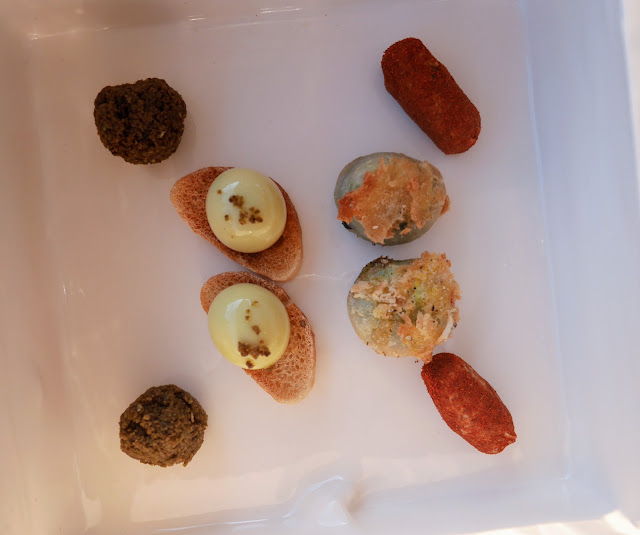 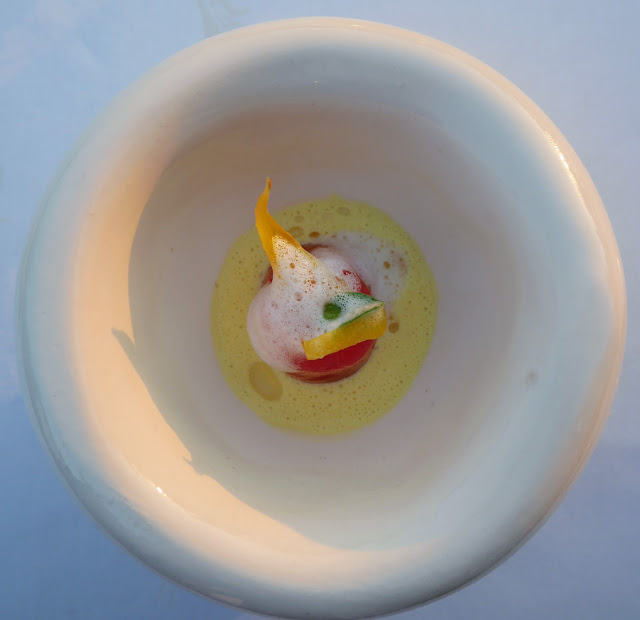 Top: An amuse bouche
A bread basket was offered with some fabulous bread. Then a trolley was brought with freshly made Focaccia. A portion was then sliced off and local olive oil poured on top. If that was not enough, a toast rack was brought with translucent, gossamer thin Cumin, Caraway and Sesame Tuilles. This was a tour de force of technique. This was a Roomali Roti on steroids, a Papad elevated in the extreme. 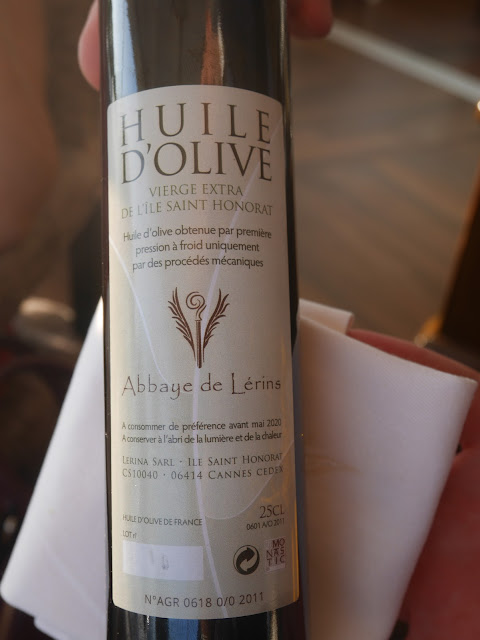 Top: The Olive oil to go with the Focaccia 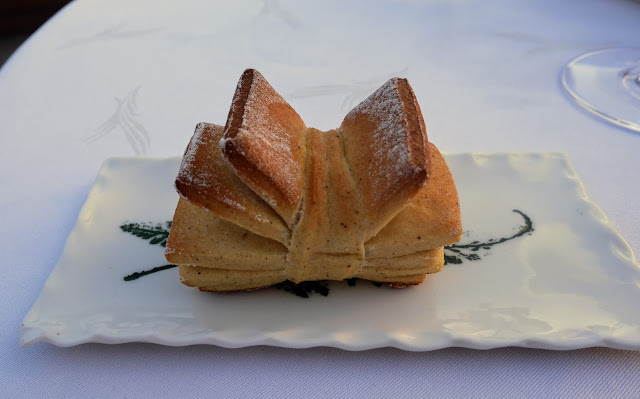 Top two: The superb bread from the bread basket. A work of art 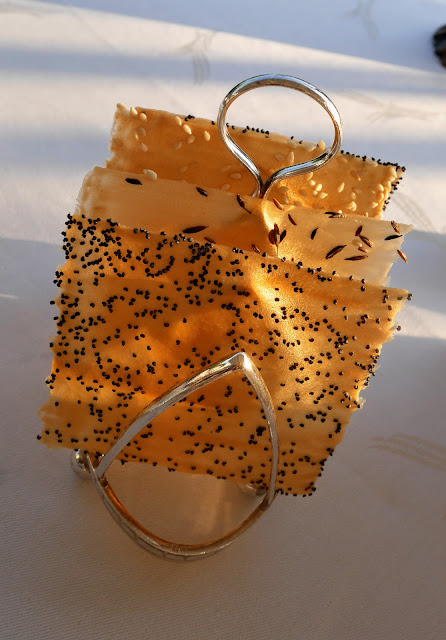 Chef Sinicropi is a qualified Ceramicist as is his wife. Together they design a lot of the crockery used in the restaurant. Some of the plating, as a consequence of using this custom made crockery is eye-catching. 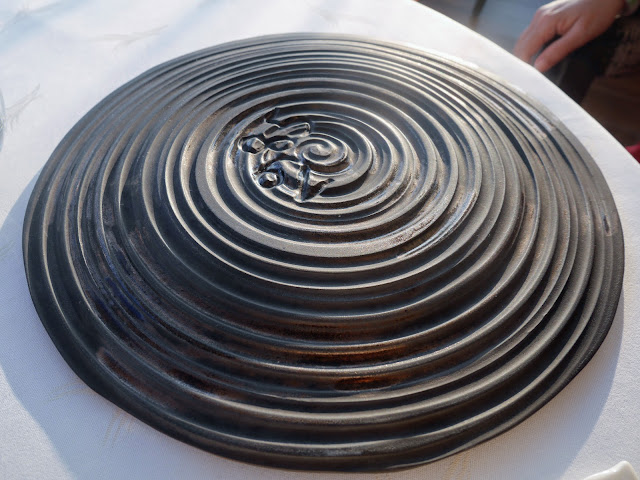 When we entered the restaurant had probably just 3 tables occupied. As the evening progressed it filled up but never got full. People seem to eat later in Cannes than London. Despite the 2 Stars in Michelin, and the superlative restaurant [both food and location] it is obvious that they cannot seem to turn tables. This seems sad as at some point the economics would break down. If this restaurant was in London, I am certain they would have turned tables 3 times during the day. 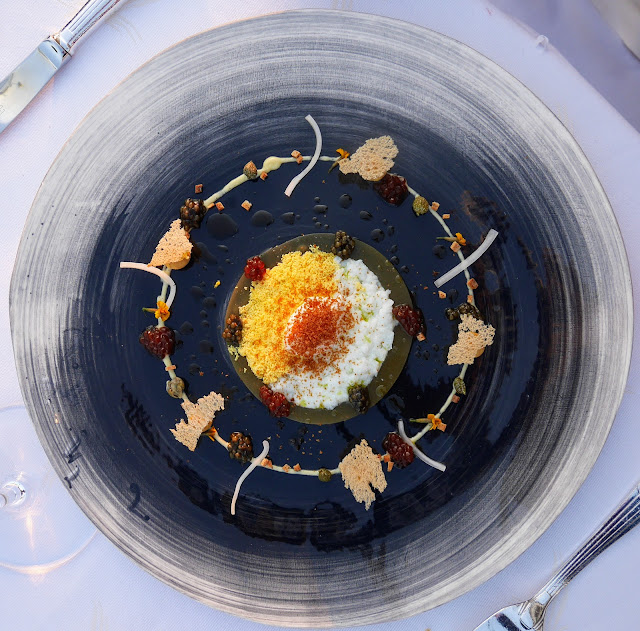 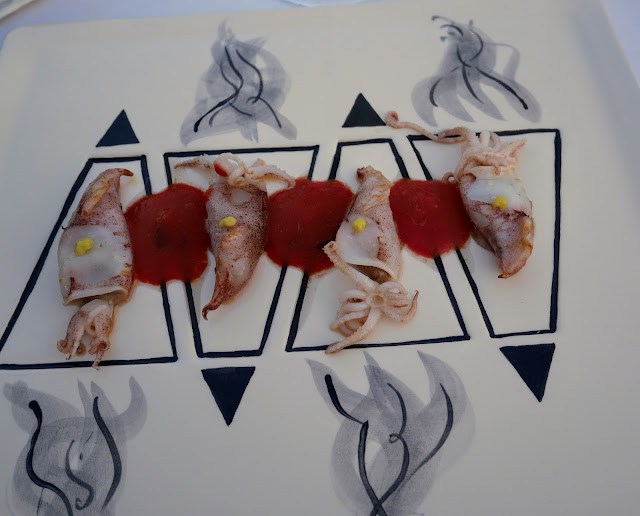 Top: From the South, My Roots: Movement 2. Baby Squid with Tomato 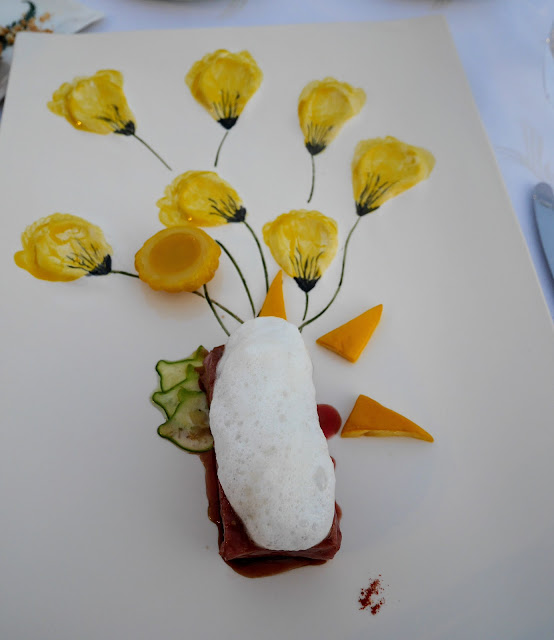 Top: From the South, My Roots: Movement 3 - Mediterranean Red Tuna 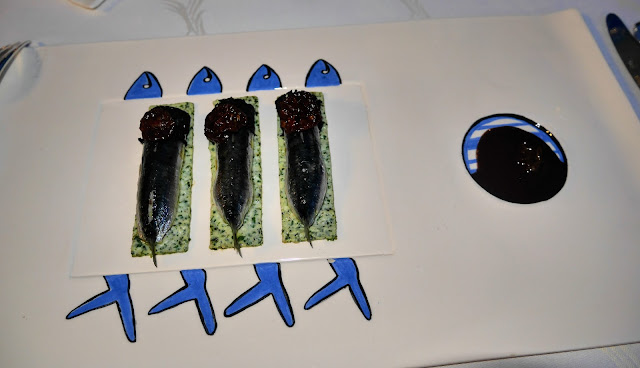 Top: From the South, My Roots: Movement 4 - Sardines, stuffed with Squid Ink and other 'pigments" 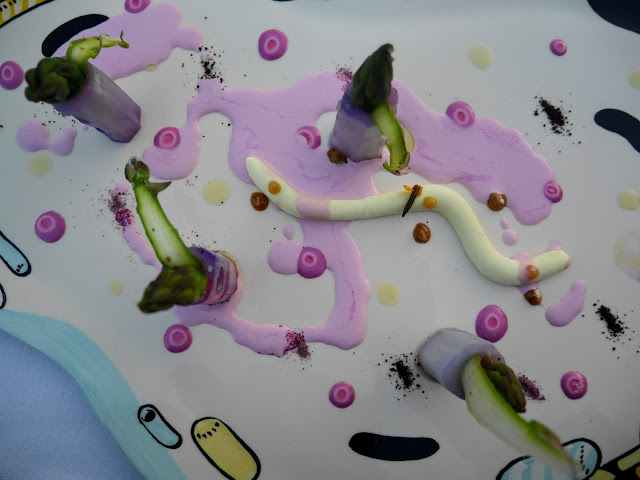 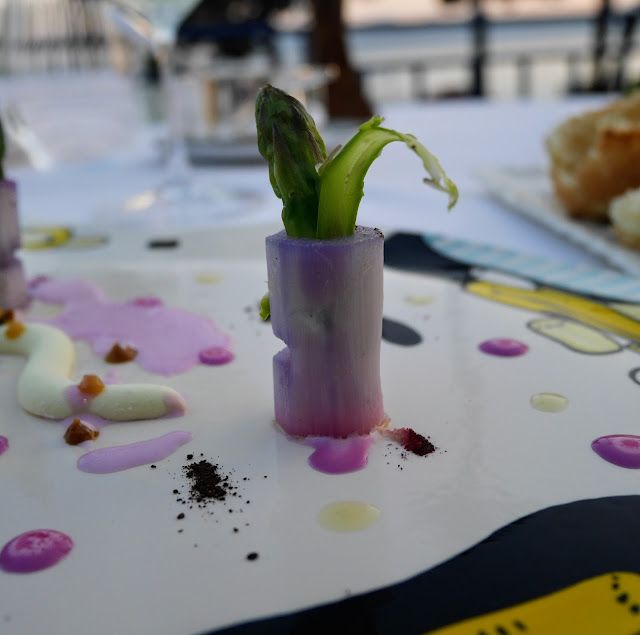 Top two. From the A La Carte. First Course. White Asparagus tainted with Beetroot to make it purple, Green Asparagus and a Wasabi Marshmellow. Beautiful to look at, fabulous to eat 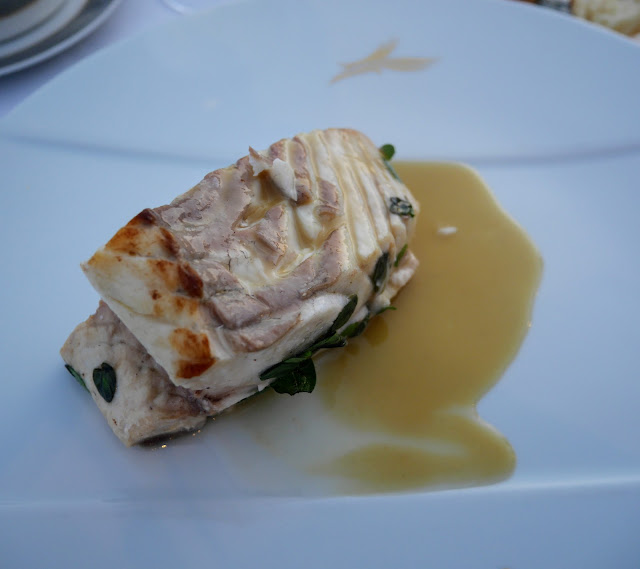 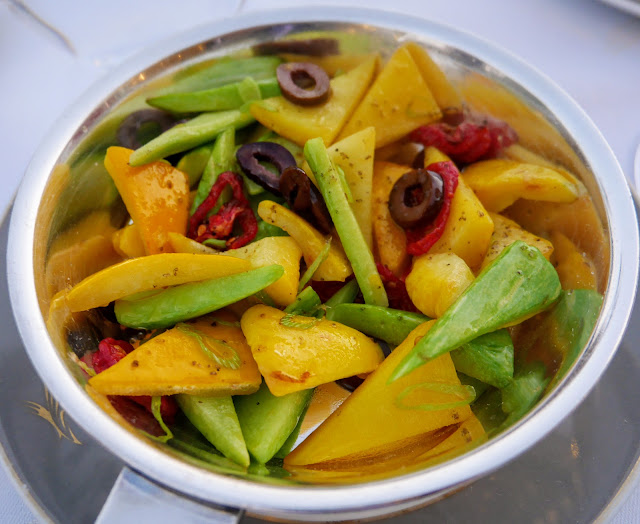 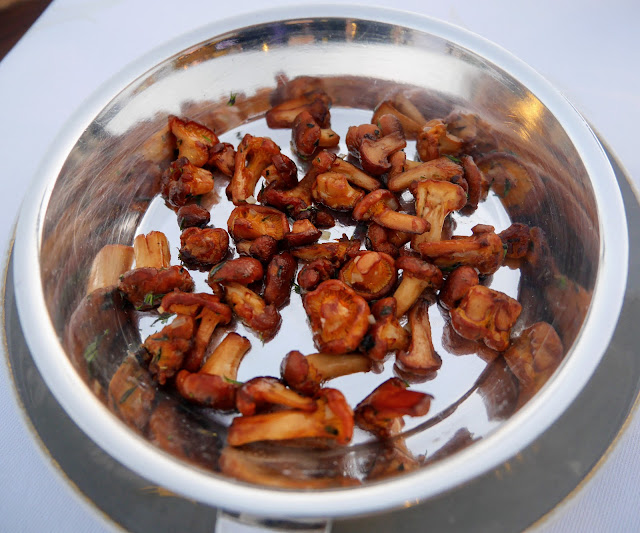 Top three. From the A La Carte. Second Course. Wild Turbot with Seasonal Vegetables and Mushrooms to accompany. 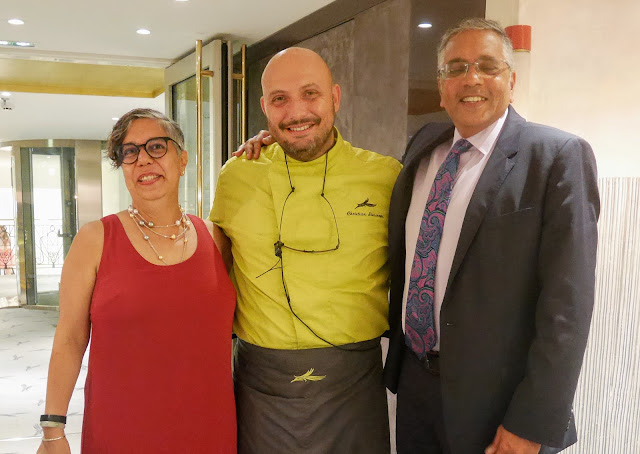 The service was good, wine topping up [we had a bottle of Sancerre] efficient. Food was delivered at the right pace. It was a very nice evening, one that we will remember. The food was good with an unbeatable location and ambience. At end the evening we met Chef Sinicroppi who was a nice guy and was genuinely pleased that we enjoyed his food. Of course, he did not believe we were from India. It is sad that I have to write this line. It reeks of arrogance for which I apologise. The point is that if someone tells you that you they cannot believe you are from India, there is a problem somewhere in the mental picture foreigners have of us Indians. I believe I am not the cause of that picture. Think about that.

Should you visit Cannes and eat at Palme D’Or. Without any hesitation, yes, yes yes.

Posted by Stonethrowers Rants at 5:38 PM