To bring the week to a close, HRH the Queen of Kutch and myself decided to do something new [by our standards] but within an overall old concept or framework. So instead of reserving a MERU Cab we got ourselves a TAB Cab. The plan was to go to the ITC Grand Maratha at Sahar Andheri East near the International Airport, and after a few intoxicants, amble to one of their 3 great restaurants Dakshin or Dum Pukht or Peshawri for dinner. The TAB Cab turned up, which was a relief, and we soon careening along the Western Express Highway in a extremely rattly Toyota Etios driven by our `Saathi’ [that is what TAB calls its drivers] at breakneck speed swerving wildly from lane to lane. We heaved a sigh of relief when we reached, in one piece with all four wheels on. I needed my drink.

The bar at the ITC Grand Maratha is quite nice; however, it’s normally fairly empty on weekends. This Friday it was quite full and with a decent band pumping out live music, the atmosphere was very nice. We were welcomed and settled down to our drinks. As you must know by now, I generally drink beer and, at the ITC Grand Maratha the draft beer is particularly good. It’s the same old Kingfisher available at most places, but, for some reason at the Bombay High, it’s always fresher, colder and simply nicer than any other place. I really do like it. HRH the Queen of Kutch had her usual, Isle of Jura.

Inevitably, it became decision making time; we had to decide where to go for dinner. We were told that Niladari, a very competent Captain from Dum Pukth had been promoted and become the manager at the Pan Asian, which as the name suggests is ITC’s Chinese, Japanese, Thai and Korean food outlet. I must point out that we had visited Pan Asian in the past and were rather underwhelmed by the experience. Indifferent food, largely Indianised in as much as it was all spicy with lurid red sauces, and targeted towards vegetarians and disguised vegetarians those who eat only chicken, preferably boneless. Thus, we had not visited it in years. With Niladari in command we took our chance and did something new, we went to the Pan Asian for dinner.

Our dinner was pre-decided for us. As a sort of pre starter we were given a small plate of Thai Som Tam, the raw Papaya Salad. Nice. Then as a starter we had a portion of Prawn Sui Mai. Excellent, gossamer like wrapping and generously filled with Prawn. Thankfully, not yet indianised. No spice of any sort. Really nice and just right to get the gastric juices going. 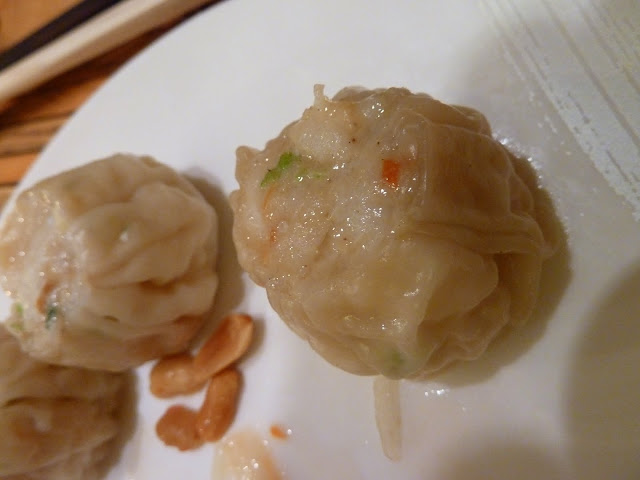 Next up for our main course we were to have a Hot Pot. The correct word is Chinese Steamboat. This is a sort of Asian fondue where a large bowl of stock is placed in the centre of the table on a heater to keep the stock simmering. The stock could be a simple chicken or have regional variations and get steadily spicy. In parts of China the stock is a lurid red heavily flavoured with chilli oil and Sichuan Peppercorns to give you the `Ma La’ sensation.


The Hot Pot concept is not unique to China. Hot Pots are popular throughout South East Asia. The Chinese have their variations, the Korean have theirs and the Japanese have what they call Shabu Shabu. In South East Asia, Hot Pot restaurants take pride in offering special and unique cuts of meat and fish to dip into the stock ranging from Wagyu beef to Fish Balls, Offal and so on.

The common theme in all these fondues and hot pots is that they are traditionally eaten in winter and are particularly well suited to a meal when you have kids with you or, if you are at a party with lots of happily drunk folks. Very interactive, great entertainment.

At the Pan Asian we got get a selection of raw marinated proteins [lamb, pork, beef, chicken, squid and prawn] and a selection of vegetables [Zucchini, Baby Corn, Bok Choy, Broccoli and two types of Mushroom]. The meats are sliced very thin so that they cook in seconds. You also get a bowl of boiled Noodle to supplement your soup. Condiments offered to spice up your soup are minced Garlic cooked in oil, a Peanut sauce and Green Onion. 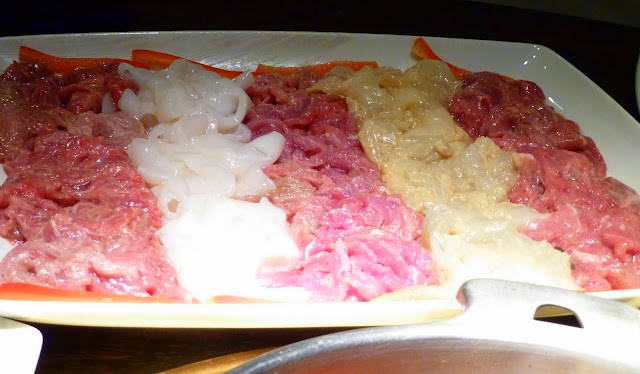 There are several ways of going about eating a Hot Pot. You always get your own bowl to eat from. In one method the meats, fish, noodle and vegetables are left on the table. You then choose a small portion of what you like, fill it into your own fishing net type contraption and place it in the hot pot to cook. Once done you fish it out, add it to your bowl and eat. This is repeated till you are full.

At the Pan Asian the method was slightly different. The meat, and at our request, only the mushroom and Bok Choy were added to the cauldron merrily bubbling in the centre. I really did not like the idea of loading my soup with Baby Corn, Broccoli and Zucchini. That is fine for the Jains, Khandelwals and Shahs, not me. After a few moments the meat was cooked and we ladled out portions of the soup and the meat into our bowls and ate. Once the meat was eaten we put in the squid and prawn as this takes a fraction of time to cook. The stock itself was a decently spiced Sichuan style stock and was quite tasty. The quality of the meat and fish was top class.

All in all, we had a very good meal. Absolutely nothing to complain about. I must caution you that the dish is expensive and if you have fussy eaters on the table it’s really no fun. All persons on the table have to eat the same thing or at least not object if you place beef or pork in the same soup. With a large group things can really get quite exciting.
If you don’t want to spend an arm and a leg and want to have a Hot Pot in Mumbai you could have a Hot Pot at Lings Pavillion which is quite popular and quite good. The stock served at Lings Pavillion is un-spiced, and as the evening goes on gets richer and more flavourful as it evaporates and absorbs the flavours of the meats added to it. The Lings Pavillion Hot Pot is slightly different, here they add the thin Glass Noodles to the stock and you don’t get any additional condiments. The are really a Cantonese Restaurant so the food is largely bland, unlike at the Pan Asian where spicing is almost across the board. I have also had the Hot Pot at Kamling Restaurant at Churchgate. However, from what I have heard, the restaurant is really on its death bed so I do not recommend your going there.

All in all a very nice evening, excellent food and great service. What more could one want.
Posted by Stonethrowers Rants at 3:58 PM