[THIS IS WRITTEN BY HRH THE QUEEN OF KUTCH]

In the swinging 60s, Bombay (as we knew it then), was home to several European/French restaurants like Bombelli’s, Gurdon’s, Astoria and the Rendezvous at the Taj, the Supper Club at the Oberoi which popped up in the early 1970’s, and the legendary Zodiac Grill. They were restaurants that catered to a sophisticated, cosmopolitan clientele who appreciated starched white table linen and a leisurely four-course dinner that was served plated instead of family-style.

Then, Bombay became Mumbai, and slowly but surely each of these restaurants died a quiet dignified death and, in their place, came a rash of brash fast food, Mangalorean seafood and the ubiquitous Chinese restaurants. Zodiac Grill was the last of these classics to down its shutters in late 2015 and even though Chef Hemant Oberoi opened his eponymous restaurant at BKC, the closing of Zodiac Grill was truly the end of a beautiful era.

To be fair, the lovely The Table at Colaba and The Clearing House at Ballard Estate are two restaurants in Mumbai that serve Modern European food, but there is only so many times you can eat your way through the menu. Slink and Bardot also ticked all the right boxes but its location in Worli Village placed it in a slightly inconvenient part of town.

And then like a breath of fresh air came the news that Soufflé S’il Vous Plaît, a French-style bistro was due to open in the heart of South Mumbai. This is newest restaurant in the Riyaaz Amlani stable and is headed by Chef Alexis Gielbaum and his (very cute) partner Nick Harrison of Slink and Bardot fame. 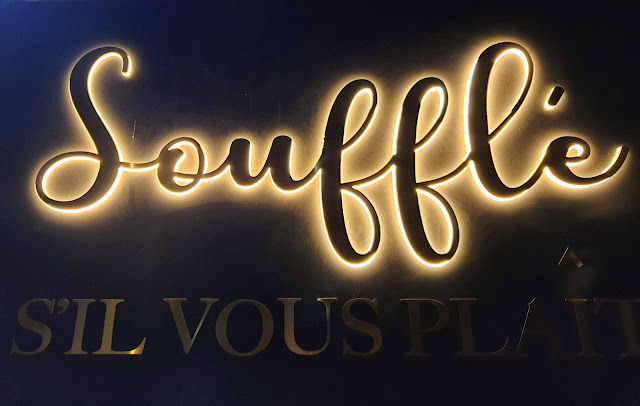 Bring out the bubbly, dance in the streets, happy days are here again…

Soufflé S’il Vous Plaît. What a delightful name. Translated loosely as Soufflé if you please. Yes, indeed I do!

Deriving from the French souffler which means “to blow” or “puff up,” a Soufflé is a light, airy cake that originated in France. According to Larousse Gastronomique, the definitive encyclopaedia of gastronomy, a Soufflé is a “hot preparation that is served straight from the oven so that it is well risen above the height of the mould in which it has been cooked”. There are two basic types of Soufflés: savoury and sweet.

Soufflés always contain three elements. The first element is obviously a flavouring component. The other two elements are a pudding or crème patissiere base if sweet or a Bechamel base if savoury, and a meringue made of egg whites. When the two are folded together, they create a light, flavourful dish as the air captured in the egg whites expands in the heat of the oven. Soufflés are often served with an additional complementary sauce to boost the flavour. A Chocolate sauce with a Chocolate Souffle or a Cheese sauce with a Cheese Souffle and so on..

Soufflés are a celebratory dish meant to impress and wow the diner. They are notoriously temperamental, extremely technical and difficult to master. Having said that, a perfectly prepared Soufflé can be a religious experience. Light, airy, deeply flavoured and fragrant. Imagine reaching out and eating a spoonful of cloud. Or being kissed by a fairy. That’s the magic of a good Soufflé.

I have eaten many many many Soufflés in my life. And baked a fair number as well.

The absolute best Soufflé I have ever eaten is at Le Gavroche, the two Michelin starred restaurant in London. Invented by the brothers Albert & Michel Roux Senior, the Soufflé Suissesse (cheese soufflé baked on double cream) is the stuff dreams are made off. Light as air, creamy, rich, decadent and absolutely sinful. I want to shut my eyes after every bite to better appreciate each cheesy melting mouthful. 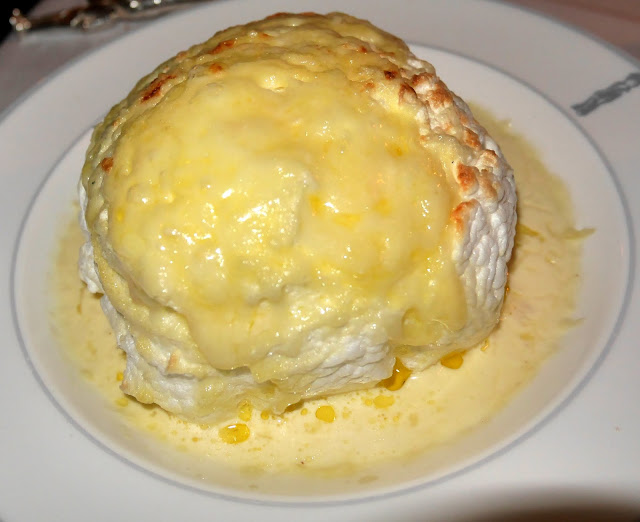 Coming a very close second is the seasonal dessert Soufflé at the eponymous Restaurant Gordon Ramsay on Royal Hospital Road, London. Also, the Pistachio Souffle with Pistachio Ice Cream served by Pierre Koffmann which was much imitated but never duplicated. 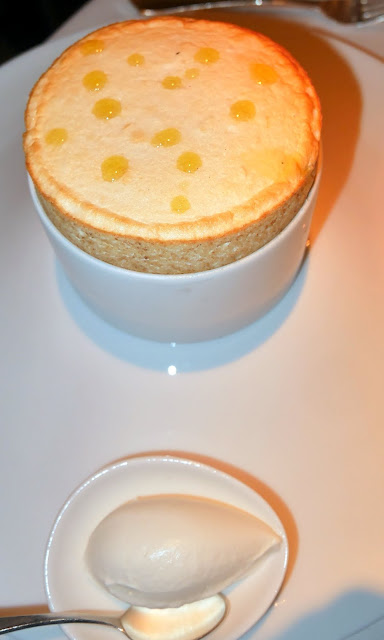 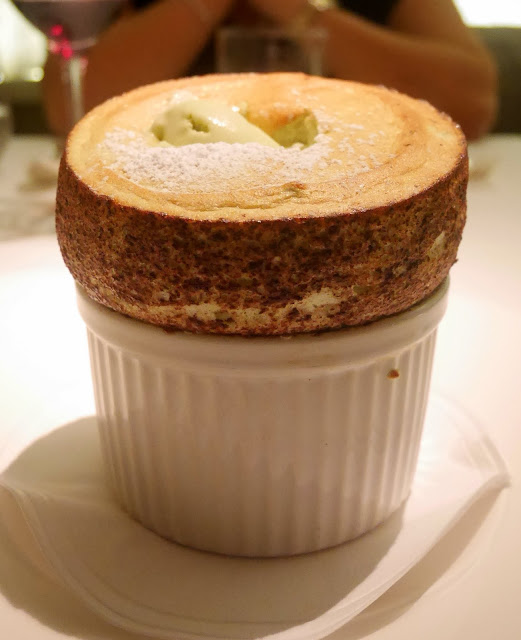 Back in India, the legendary Camembert Dariole, a twice-baked Cheese Soufflé perfected by Hemant Oberoi, was the mainstay of the menu of Zodiac Grill for over 25 years.

Which is why, a restaurant that named itself Soufflé, coming up in my city was a cause of much excitement and anticipation.

Reservations are made for the third day after Soufflé S’il Vous Plaît opens its doors. After a few early tipples, we arrive at the restaurant, slotted neatly between Foo and Shiv Sagar on 'restaurant street' in Churchgate, and are quickly shown to our table. The restaurant has a charming outdoor seating area and an air-conditioned indoors with a large, well-stocked bar. Being mid-December I guess it would have been cool enough to sit outdoors but I cannot imagine how a Soufflé will survive the humidity and the travel without collapsing. Also, eating a Soufflé when the ambient temperature is 30 degrees Celsius doesn’t sound like a particularly pleasant experience. But, in keeping with the spirit of the season, I leave this for the three wise men to figure.

The décor is deliberately evocative of a traditional French bistro with black and white tiled floors, quirky wall pieces, warm and inviting booths with leather banquettes and Art Deco Lights. The restaurant is buzzing and alive when we enter and remains full till we leave. 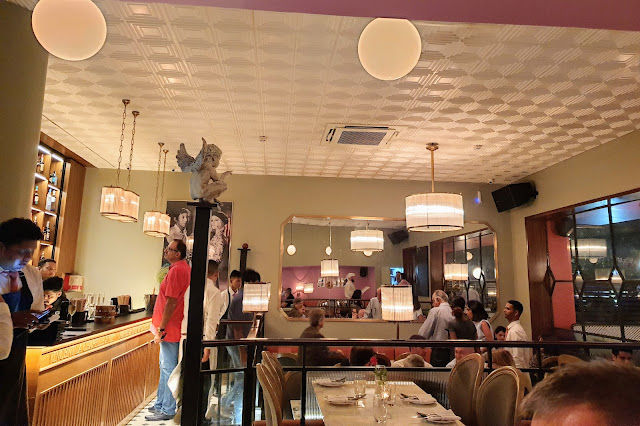 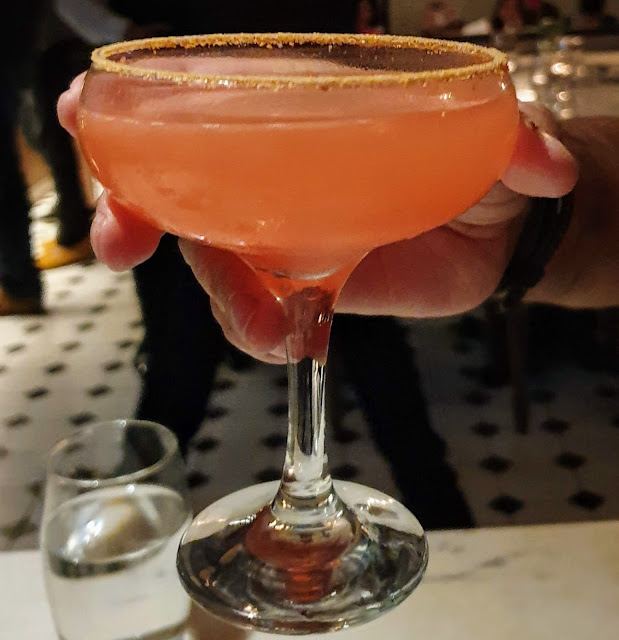 The menu is replete with French bistro classics like Soupe a l'oignon Gratinee (French Onion Soup), Beignets De Crabe (crab cakes), Ratatouille Provencale (A classic French vegetable stew), Steak Frites and Confit Canard (duck confit). But the backbone of the menu are the Soufflés. I counted a total of 5 savoury and 3 dessert Soufflés, which is impressive by any standard.

The service is prompt, friendly, polite and well informed. Creditable for a three-day-old restaurant. Take a bow restaurant manager Anand as well as Nick Harrison who personally oversee every table, take orders, make suggestions and smooth over any small hitch. Impeccable front of house.

We place our order and waited with keen anticipation. Not to nit-pick but the food comes out in an extremely haphazard way. At any given time only one of us has food in front of us. The others have either finished their course or are still waiting to be served. Rather awkward, but I am in a generous mood and put it down to teething trouble in the kitchen.

The Homard (Lobster) Soufflé looks the part and is light and reasonably well risen. Unfortunately, the muddy brown lobster bisque that is poured into the centre doesn’t really taste much of lobster and misses the mark on flavour and punch. The Blue Cheese Souffle (twice baked with walnut/almond and blue cheese cream sauce), is again technically very good but misses the mark on flavour. The pungent, sharp distinct taste of a good blue cheese like Roquefort, Gorgonzola or Stilton are missing and in their place is a mild, creamy flavour. Maybe, just maybe, a mild Danish Blue was used, but the Soufflé doesn’t deliver on taste. I am guessing an infinitesimal amount of blue cheese was used, but not enough by a mile. 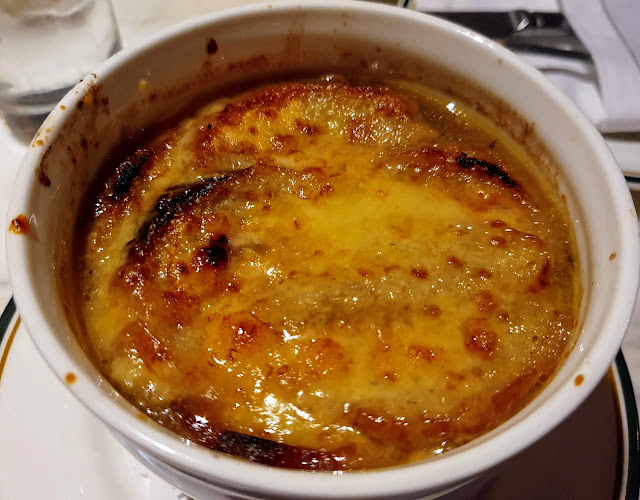 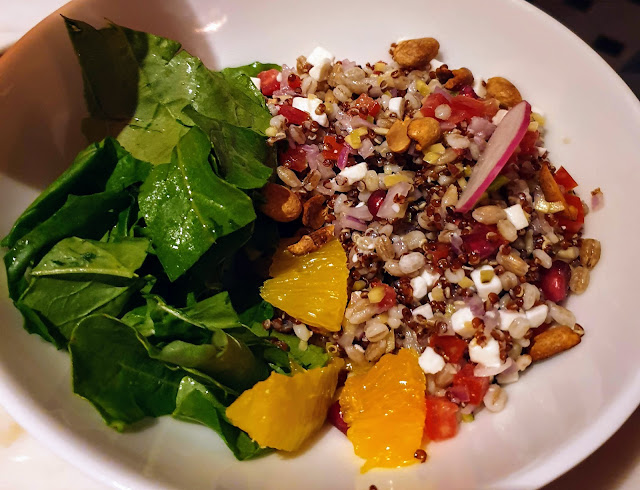 Above: Ancient Grains and Feta Salad. 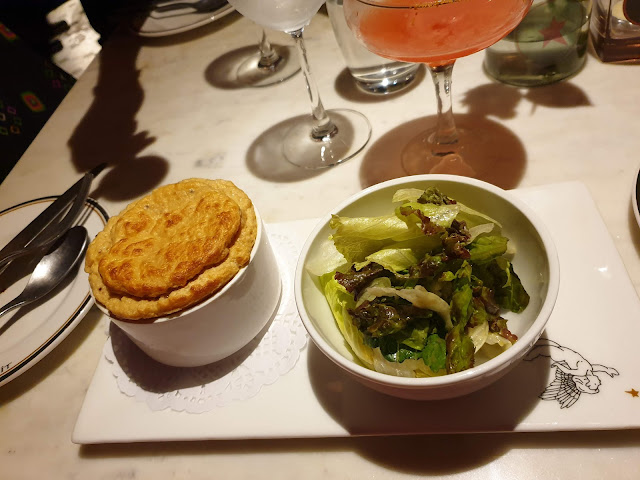 Above: The Lobster Souffle. Not really high and handsome. 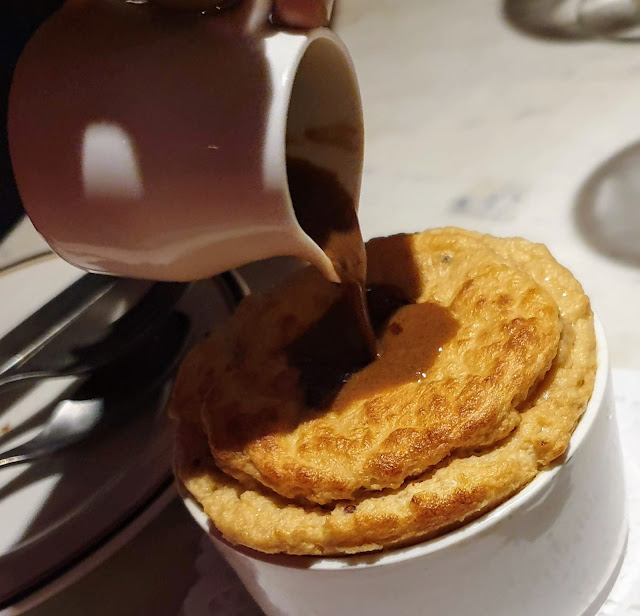 Above: the Lobster Bisque being poured in. 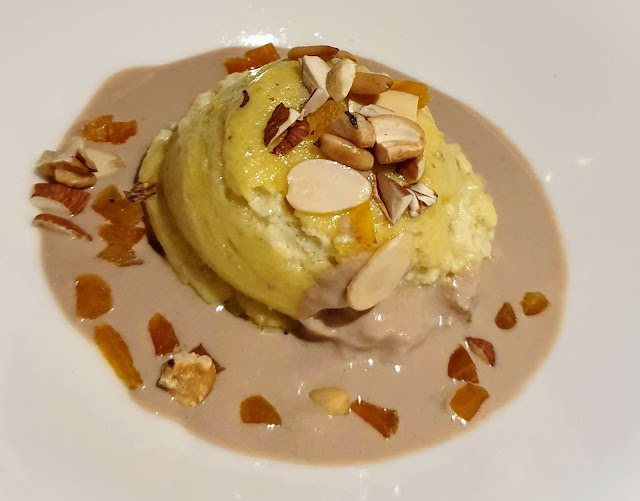 This theme continues through the rest of the meal. Technically very impressive, but missing the mark on flavour and authenticity. There were also problems between what was described on the menu and what actually turned up on the plate, as you will see from the photographs.

The Beignets are perfectly fried but lack the sweet crab flavour that would make them more than a good cheese pakoda. In fact, when I cut one in half, it had barely any crab at all. The Duck Confit arrives without the crisp skin that makes the dish special. The duck had alas not been cooked enough, probably 30 minutes more in the fat would have made the duck really unctuous. A dish named Carrots! is brilliant in concept and well-executed but tastes boring and one dimensional because the carrots used by the restaurant need more than just clever technique to shine. 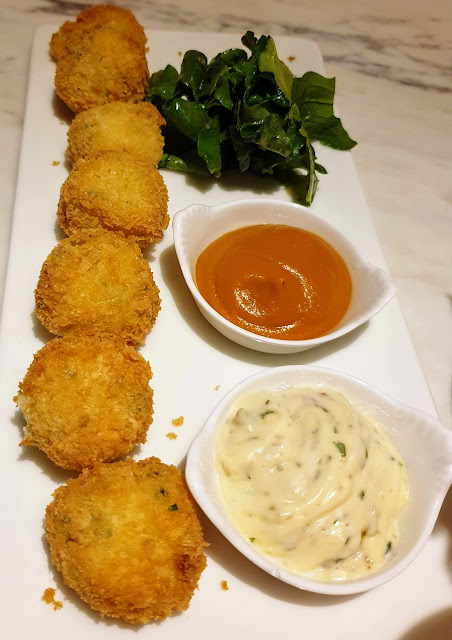 Above: The Crab Beignets 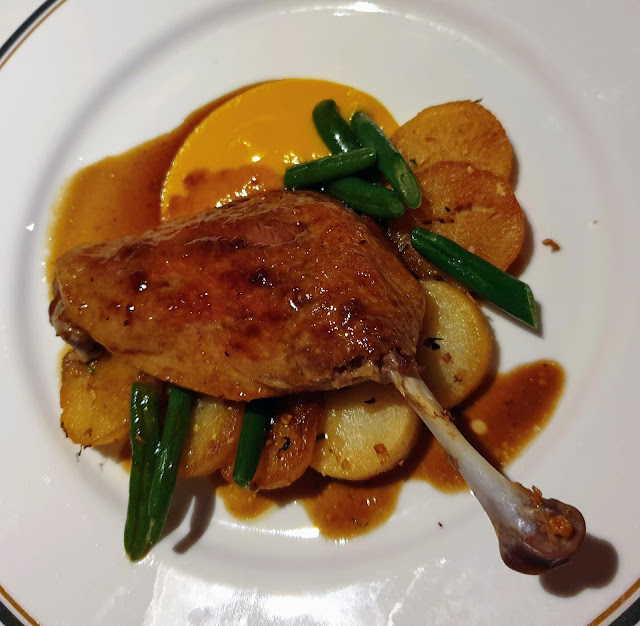 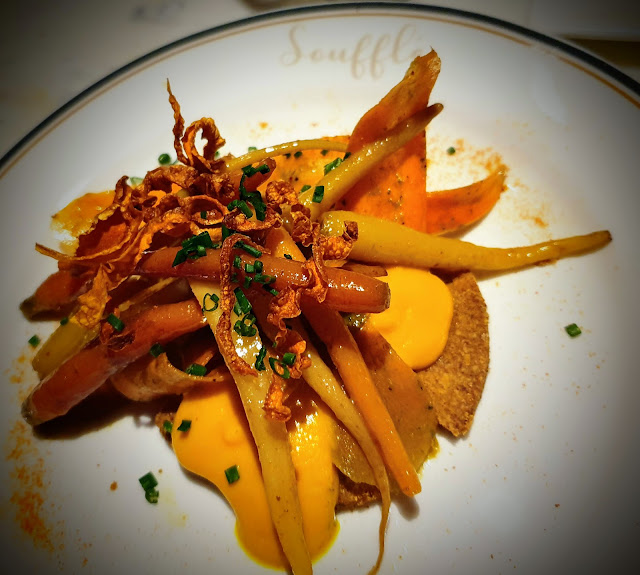 We are very puzzled because the kitchen is very obviously run by a person who knows his craft. Each dish is flawlessly executed and technically perfect, which is a big deal when, besides all other dishes, you are sending out seven different types of Soufflé to a full restaurant.

A glimmer of an answer is given when the Pissaladiere hits out table. A Pissaladiere is a classic flatbread from the South of France which is topped with caramelised onions, anchovies and Niçoise (black) olives. What arrives at our table is a flatbread with a small amount of caramelised onion, roast red peppers, some green leaves and olives! What on earth is this pizzaish thing? All four of us sit looking at it in fair bewilderment till restaurant manager Anand takes one look at us and shrugs apologetically saying ‘that’s what our customers will eat’. 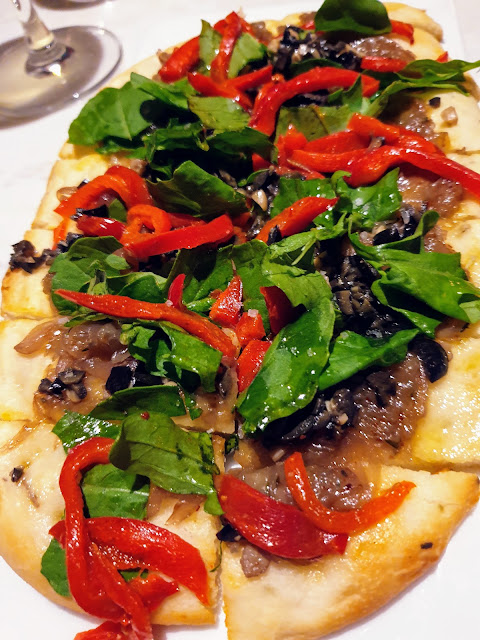 To put this in context, imagine if you ask for an Idli in France and are served fluffy white cubes with pulled pork and dauphinoise potatoes. That’s how incongruous the Pissaladiere is for us

Is that it then? No aggressive anchovy or blue cheese. No distinct lobster or crab flavours. Keep everything mild neutral and palatable because that appeals to the Indian palate? Yes, I can hear you asking, what about the Mangalorean restaurants which are the darlings of Mumbai and serve crab by the truckload? That’s easy, what we are lapping up is the masala which more often than not, overpowers the taste of the meat.

But could it also be that the problem at Soufflé S’il Vous Plaît is one of pricing? Lobster, Crab and Roquefort are expensive ingredients. I believe the restaurant is keeping costs down by using just the smallest amount of these ingredients. All the dishes are modestly priced and that would not have been possible if the luxury ingredients were used in abundance.

So, I am guessing it’s a conscious decision to keep flavours muted so no one sends back food that tastes too aggressive and alien. And keep costs down at the same time by using skimpy amounts of expensive protein. Clever. But an unfortunate compromise.

Having said that, the French Onion Soup was very good. And the absolute stand-out dish of the evening was the Baba au Rhum – a small cake made of leavened flour that is steeped in rum after baking.  Legend has it that a Polish King who was exiled in France named this dish after his favourite hero, Ali Baba from The Thousand and One Nights! The Baba au Rhum at Soufflé S’il Vous Plaît is seriously up there with the best. Moist and fragrant with hints of vanilla and citrus. And a sweet whipped cream that is cut by the bittersweet alcohol. A very elegant combination. Absolutely spot on. 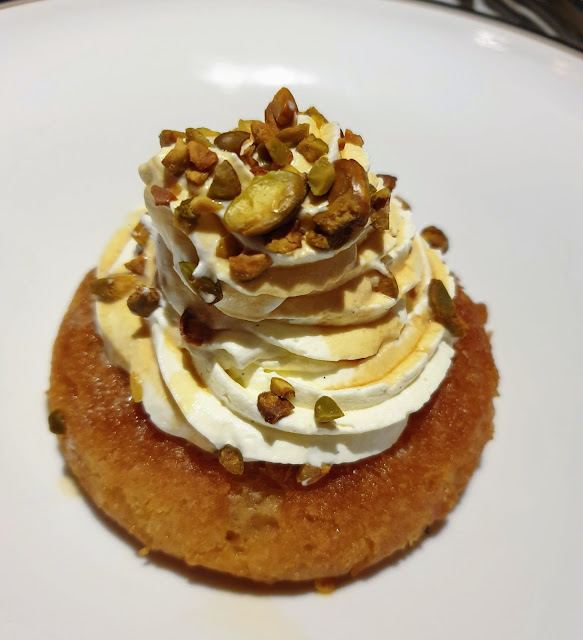 The evening we were there, the restaurant was absolutely rocking. The few reviews I have read are glowing and gushing. The trendy folk of South Mumbai are in a fit of clevers to fill the restaurant and rave about its authenticity.

For me, it fell short of the mark. Almost there but not quite. Very sad, though easy to fix. I seriously hope they do.

Posted by Stonethrowers Rants at 2:58 PM