No visit to Lyon should be without a meal at one of the high-end restaurants in and around Lyon. The most famous is, of course, L'Auberge du Pont de Collonges, the restaurant with 3 stars in Michelin owned by the Late Paul Bocuse. In addition, there are 4 with 2 stars in Michelin. We chose Mere Brazier. This place has some serious history.

I had written about the Mothers of Lyon. Eugenie Brazier was one such mother. She was born in 1895 in a farming family. In 1921 she established La Mere Brazier and in 1933 she was the first female chef ever to be given 3 stars in Michelin. A few years later, she earned another 3 stars in Michelin for her other restaurant Le Col de la Luere. She must have been a formidable personality, a force of nature. The legendary Paul Bocuse began his career at her restaurant in 1946. Her cookbook and autobiography were translated into English and published in 1977 shortly after her death. Two French Presidents Charles de Gaulle and Valèry Giscard d’Estaing were amongst her many regular customers and admirers. Film stars like Marlene Dietrich ate at her restaurants. She was offered lucrative employments by the Aga Khan and the Waldorf Astoria in New York. But she remained in Lyon. After her death the restaurant ran for a few years and then shut.

In October 2008, Mathieu Viannay, himself a rather extraordinary Chef, took the place over and today it holds 2 stars in Michelin. Mathieu Viannay is the holder of the very prestigious MOF award (Meilleurs Ouvrier de France). Wikipedia tells us about MOF:

The title of Un des Meilleurs Ouvriers de France (shortened to MOF) is a unique and prestigious award in France according to category of trades in a contest among professionals. The awarding of medals occurs at the Sorbonne in Paris, during a large reunion followed by a ceremony in the presence of the President of the French Republic.
This award for special abilities is unique in the world. Created in 1924, initially between the best workers of the era aged 23 and over, this contest was given the title of Un Des Meilleurs Ouvriers de France (One of the Best Craftsmen of France). Today, by the diversity of specialities, the list of which is regularly updated, the award has also been awarded to more modern trades and high technology fields.
The candidate is given a certain amount of time and basic materials not only to create a masterpiece, but to do so with a goal of approaching perfection. The chosen method, the organization, the act, the speed, the knowhow and the respect for the rules of the trade are verified by a jury just as much as is the final result. The winning candidates retain their title for life, with the indication of the specialty, the year following the one in which they obtain the title. This prestigious title is equally recognized by professionals and the greater public in France, particularly among artisan-merchants such as pastry makers, hairdressers, butchers, jewellers, and others whose trades are recognized, particularly those for more luxurious goods.
This competition requires months, sometimes years, of preparation. Technical skills, innovation, respect for traditions and other aspects are all practiced repeatedly to a level of refinement and excellence, effectiveness and quickness to succeed and be crowned by the jury, which makes its decision according to the distribution of points awarded during the entire process

The filmmaker D A Pennebaker whose films were mostly quasi-documentaries on various music stars [Dylan, Bowie, Alice Cooper & Jimi Hendrix] made a film in 2009 on the MOF called “Kings of Pastry”. I believe the film is quite something. I have not seen it though would love to.

With this kind of background, we were expecting good things from La Mere Brazier. We had made our bookings from Mumbai. So, when we arrived in Lyon, as a matter of precaution, we requested our Concierge to reconfirm our reservation. When we mentioned La Mere Brazier, much to our surprise and amusement, the Concierge responded with, and I kid you not, “Oh la la”. Yes, they really do say that in France.

As we entered thru a longish passage, our coats were whisked away, our names confirmed and we were escorted to our table. There were two rooms, we were seated in the outer room, tables well spaced, well lit and one did not feel at all claustrophobic despite the fact the room had no windows. Menus were handed out, aperitifs ordered and meal decided.

An amuse bouche was served comprising of a typical Lyon dish, Pate En Croute. It was this first dish, an amuse bouche at that, which showed the kitchen’s skill. The pastry on the En Croute was light and crisp. The Pate inside deeply flavored. It is difficult to see in the photo, but the jelly between the crust and the Pate on the left of the slice was rich and meaty. The Cherries that garnished were the best I have eaten. Well begun. 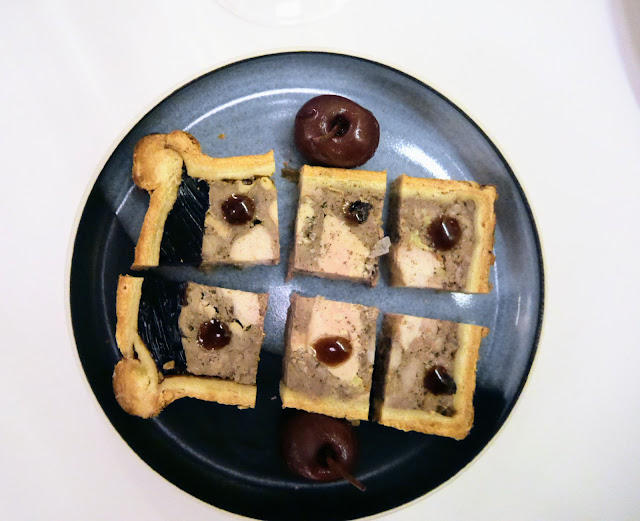 
We were not done yet. Another amuse bouche turned up, this was a dish with Pasta and Mushrooms. It was served lukewarm. I do not know if that was intentional. This was nice, nowhere as good as the En Croute. 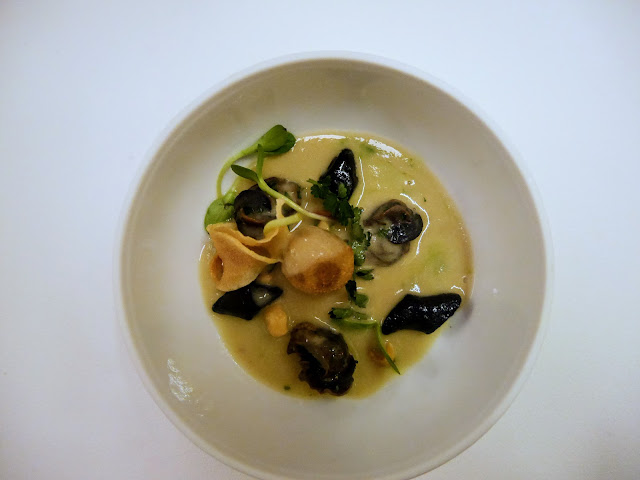 HRH the Queen of Kutch ordered “Sea Spider with Condiments, Celery Emulsion and Caviar” – a Sea Spider being a poor translation of a Crab. Beautifully served cool and refreshing. 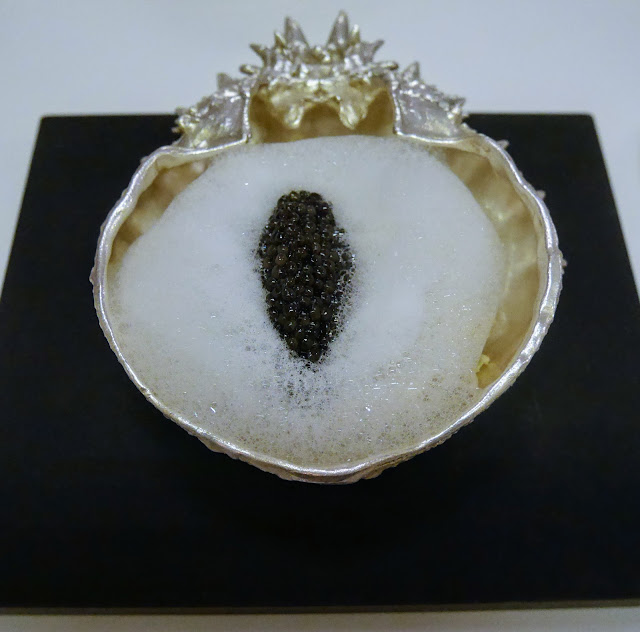 I ordered Artichoke and Foie Gras. Here an Artichoke Heart is encased with Foie Gras also served cold, with an Oven or Sun-Dried Tomato and shaved Fennel. I thoroughly enjoyed this dish. 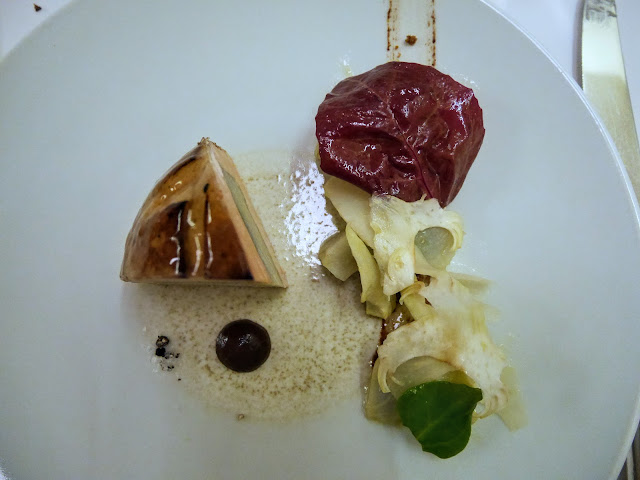 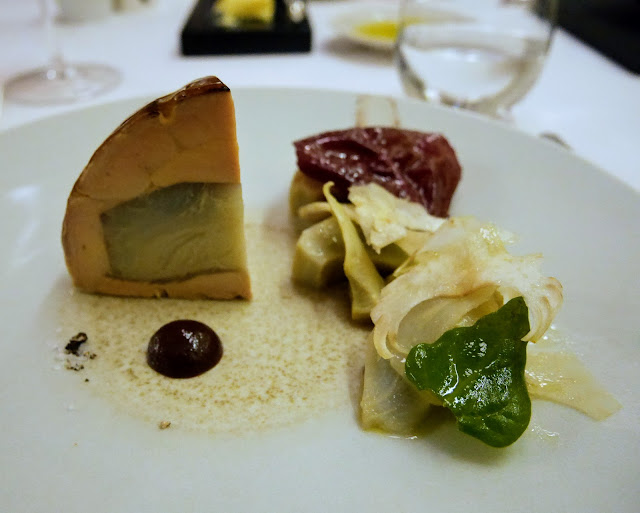 Artichoke and Foie Gras
For the main course we decided to share a Roast Chicken. This was no ordinary chicken but a Poulet Bresse the famous French chicken, renowned for its taste and colours – the red head, white feathers and blue legs – very patriotic, the colours of the French flag. This was to be served in tow courses, breast and leg. Good tableside action. Excellent Breast and sauce. Unfortunately, the second service of legs was overcooked. 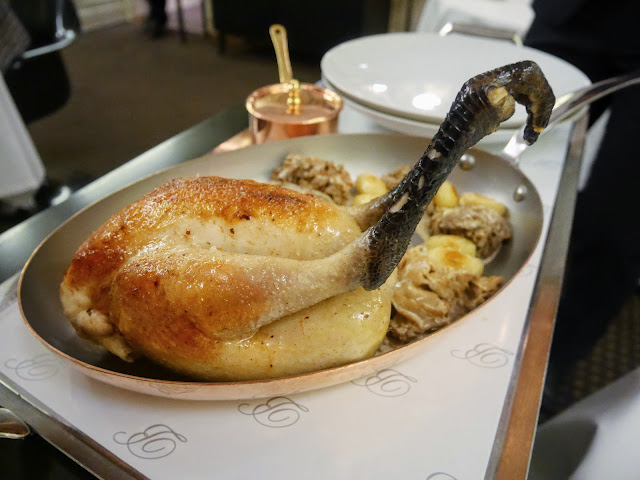 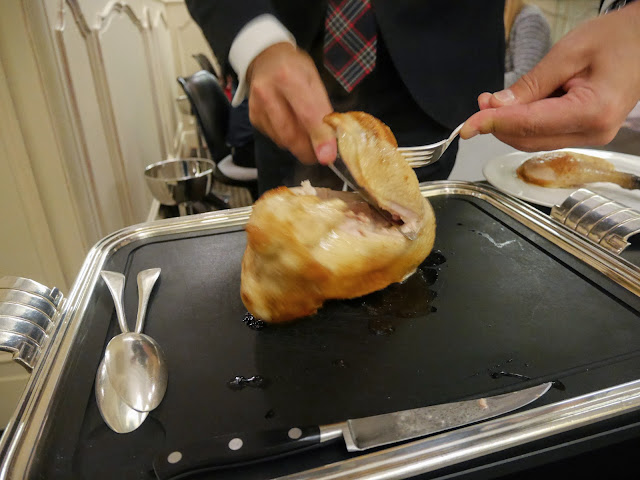 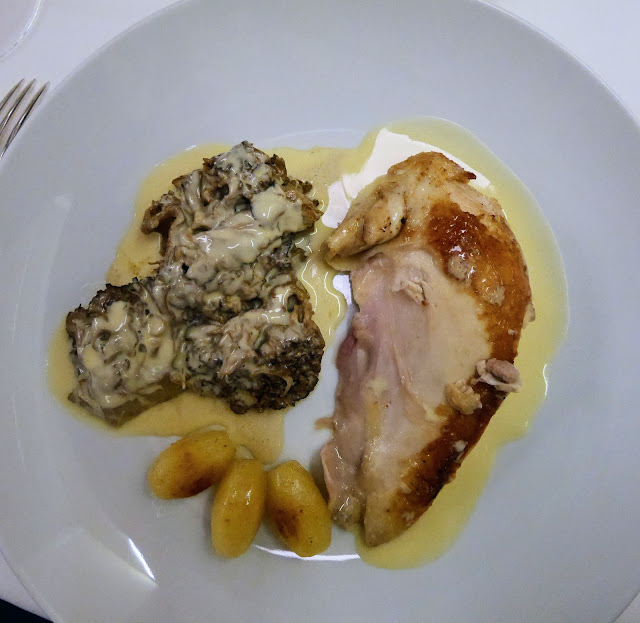 Above: Roast Chicken. Table side action and the superb Breast 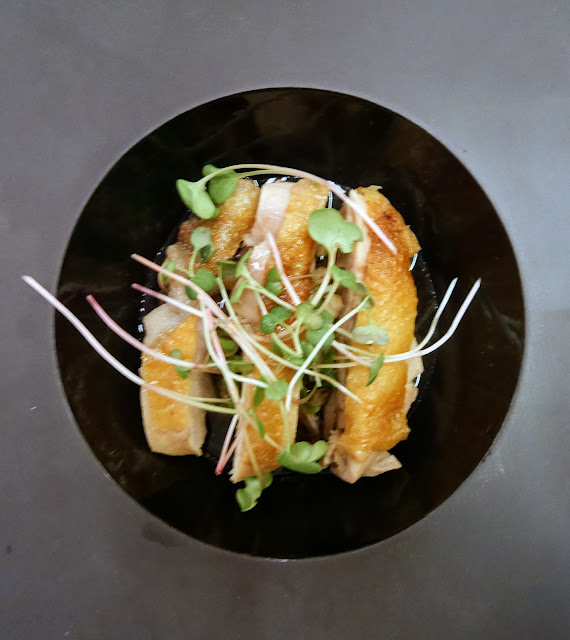 One dessert was ordered, the Paris Brest. This is a very traditional dessert named after the Paris to Brest cycle race. The dish comprises of a circular Choux Pastry representing the wheel of a bicycle, which is cut horizontally and filled with a Hazelnut Cream. What I got was a very modern version. Really beautiful to look at and delicious to eat. I was a happy bunny. 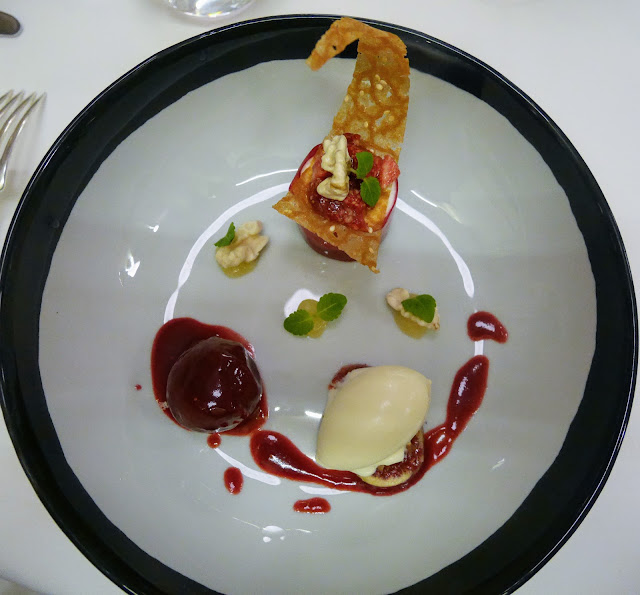 Royal Gala with Hibiscus Juice, Tahitian Vanilla Mascarpone Cream, Caramelized Pecan Ice Cream, Blackcurrant Crisp
All in all, I was very happy with the meal and the evening in general. There was some stiffness with the staff, I believe on account of the language problem. I did get a smile or two from the Sommelier when I asked him, in jest, why a French restaurant was serving Italian water [San Pellegrino]. He had a go at me, also in jest, when I ordered a bottle of Pinot Noir which is a light wine, which he said was “like fruit juice”. Possibly he was bashing me for not ordering a pricier wine. But who cares. We liked the wine.

Service was good all throughout. One odd thing. Once we finished a course, our plates were not cleared. They remained on the table. Then once the next course was to be served, there would be a flurry of activity when our plates would be cleared, fresh cutlery set and the next course served. This was odd. You don’t leave the diner with dirty plates in front of him. Possibly this system is what is used in France. I don’t believe we were singled out or discriminated as I could see this happening all around us.

Personally, I had a good evening and a wonderful meal. HRH the Queen of Kutch was a bit disappointed. The uncleared plates and the overcooked second service of chicken did her in.

Would I recommend this place? Oh yes.

Posted by Stonethrowers Rants at 6:59 PM