Reading the previous post, you must have surmised we were in Australia, Down Under.

A few bits of information which no one will tell you:

1.  There is a very thin Ozone layer in Australia. You will get sunburned. You will get tanned. The sun is fierce and scorches.
2.   Water going down the drain does NOT swirl the other way, at least as far as I could tell

Last July, i.e. July 2018, an old friend who is a travel agent in Australia said he was a vendor for Australian Open tickets. A few enquiries and a decision was made. We bought tickets for the Women’s and Men’s Finals of the 2019 Australian Open Tennis Tournament which were on Saturday 26th and Sunday 27th January. Once that was done it was a small matter of building an itinerary around the two days.

Truth be told we were quite excited. A new country/continent to see with the added thrill of the Australian Open finals. After inputs, we finally decided on a three city holiday – Sydney, Cairns and finally Melbourne, from where we would return. Sydney for the obvious Opera House and two more must do’s – a seaplane ride over the Sydney Harbour and the much recommended Sydney Harbour Bridge Climb. Cairns for the must do Great Barrier Reef and Daintree Rainforest. Melbourne for the tournament. Australia is a continent and large. The main cities are on the coast so getting from one to another is at least a 3 hour flight. We have never been in favour of these whistle stop tours of landing in a place and flying out two nights later. So, we adopted a more leisurely approach.

Sydney was our entry point, and it was hot. Really hot Bombay type temperatures but less humid. There are broadly two areas where tourists like us are recommended to stay, the first being Darling Harbour and the second being the main Sydney Harbour/Circular Quay area. The two areas are approximately a 30 minute walk away from each other. We were in Darling Harbour which is a large “U” shaped Harbour with purpose built recreation facilities. You have probably 30 restaurants bars, a Madam Tussauds, an International Convention Centre, Aquarium so on and so forth. Darling Harbour adjoins China Town. Darling Harbour has some large chain hotels, but my observation was that the Sydney Harbour/Circular Quay area had equally large though more expensive hotels. You could stay in either area. 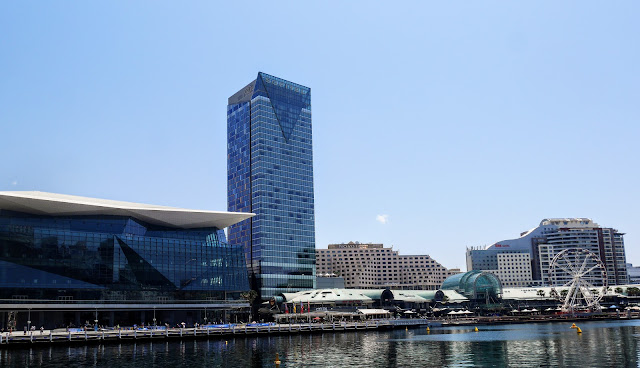 The Sydney Opera House is really quite something. It seems almost ethereal floating in the water. There was a worldwide contest inviting architects to design the Opera House. The winning design was by a Danish architect Jorn Utzon. A must visit. 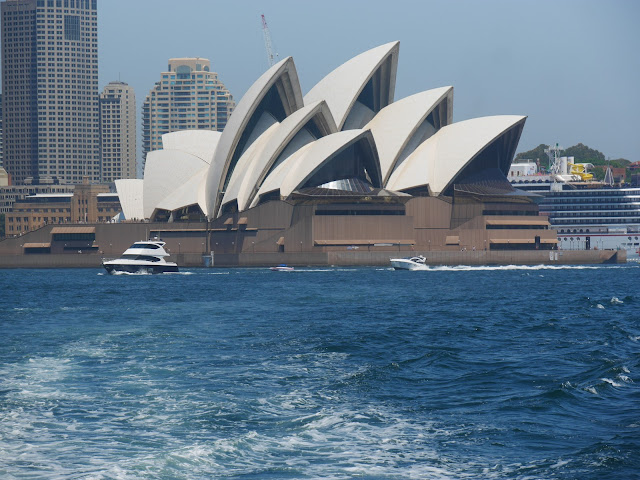 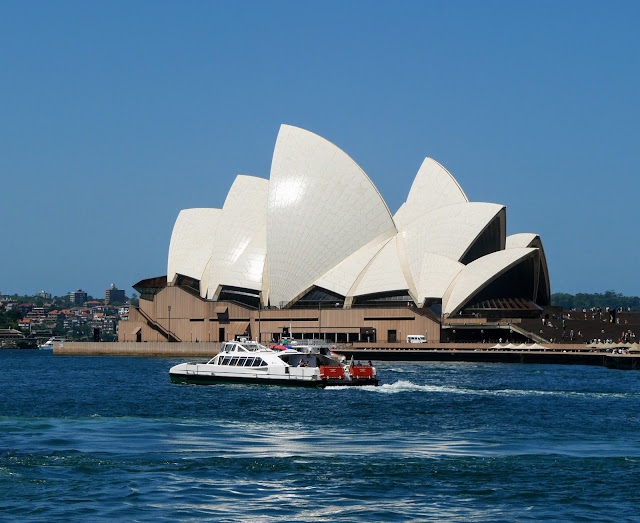 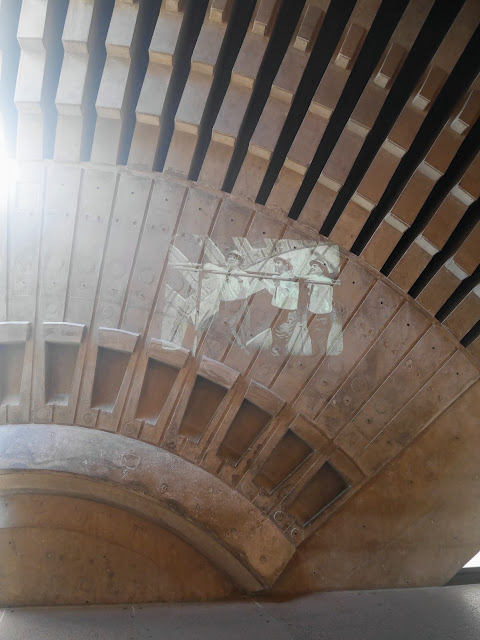 The internal showing the trusses and the concrete work 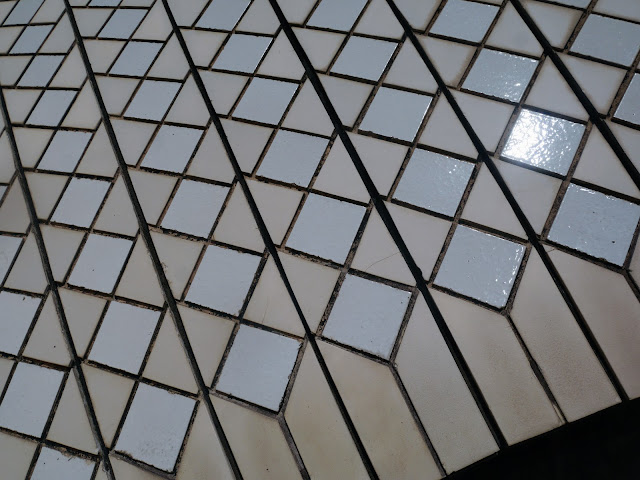 The tiles are not pure white, but mixed white and cream. With channels for rain water to drain 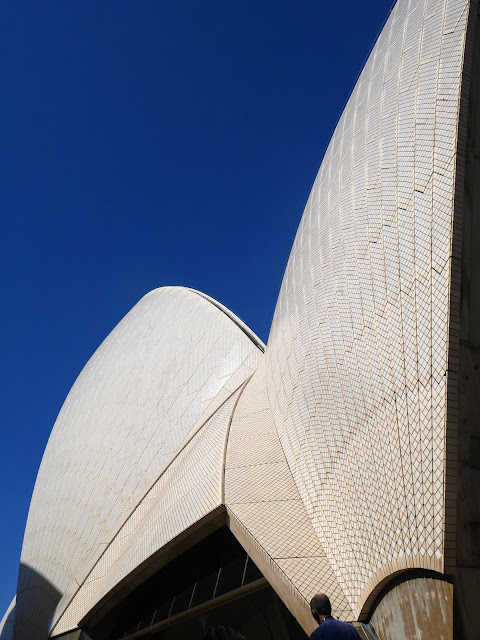 The highlight of our entire Australia visit was the Sydney Harbour Bridge Climb. This is something I will very very strongly recommend to anyone visiting Sydney. For us Indian’s this experience is unimaginable. Every single authority and NGO and activist would be up in arms at something like this. Our Government would literally explode if this was ever proposed. People would commit suicide by jumping off the bridge, terrorists would attack, birds would die, water would get polluted, fishermen would find their catch dwindling. God Knows what else. Paul Cave decided to make climbing the Sydney Harbour Bridge a permanent attraction. This led to many years of dealing with state and local government bodies, community groups and many experts on safety, logistics, media, heritage and conservation issues. After nearly ten years of research and development, Bridge Climb Sydney was officially launched on 1 October 1998. At that time, Bridge Climb was the first tourism operator on a bridge anywhere in the world. 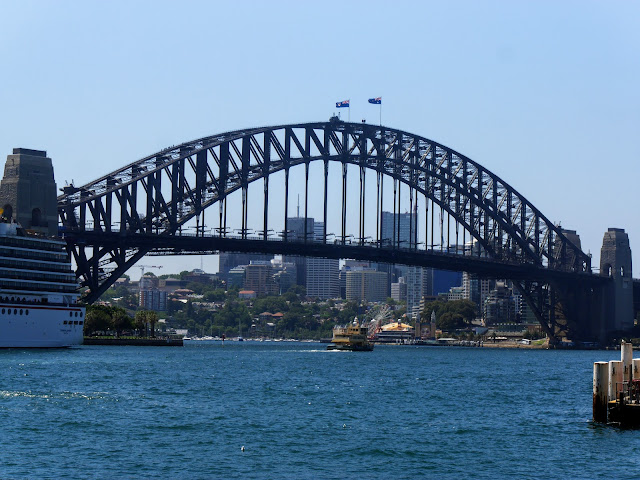 We were booked on the full Bridge Climb which takes about 3 hours including preparation. The climb is on the top upper arch of the bridge. You do have shorter walks as well as walks on the lower arches and, a walk in Mandarin with your guides speaking Mandarin. We were booked on the twilight walk hoping to see the sun set. Unfortunately, it did not really set but disappeared behind some clouds. I was most most impressed by the preparation before the walk and the level of professionalism. We were given special overalls, which because of the heat, we wore after stripping of all our clothes. No jewellery no hair clips nothing. Spectacles were to be tethered, Caps were tethered. Each of us were given a set of headphones and a radio transmitter all tethered. Even a handkerchief we were given was fastened. Then were stepped into harnesses and were clamped onto a guide rail. Lockers were available to store our clothes. Obviously, no cameras were allowed. The only tricky part in the climb is ascending and descending four ladders that are vertical. The climb takes you 440 feet above the water. That is high and it gets windy. You have boats below. If something falls from that height you can kill someone. I am not for the moment suggesting that I had a life changing moment or experienced an epiphany, but the Bridge Climb is very nice. You must do it. 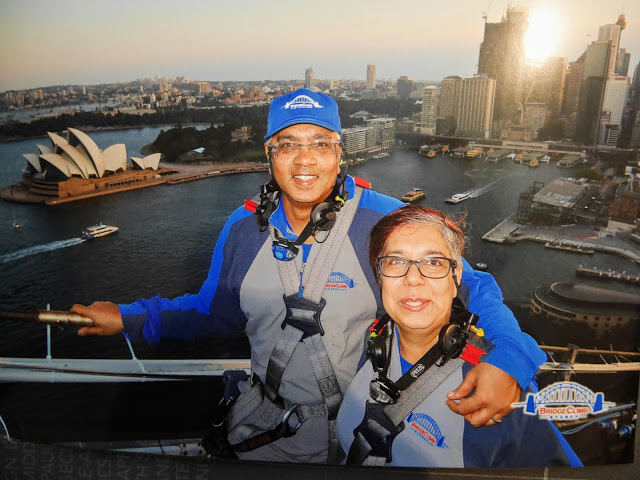 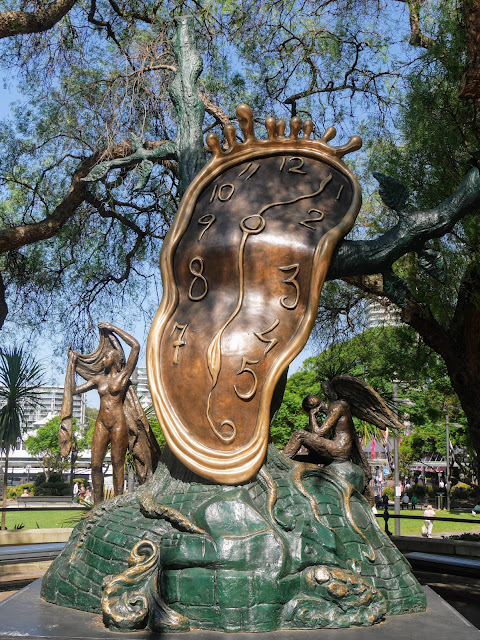 A Dali Sculpture in the Rocks area 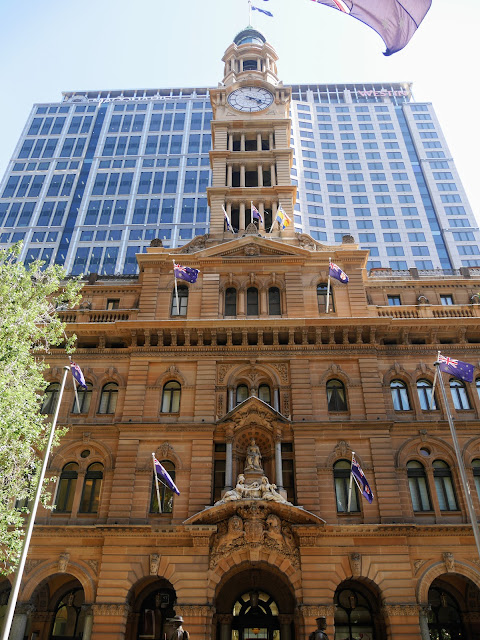 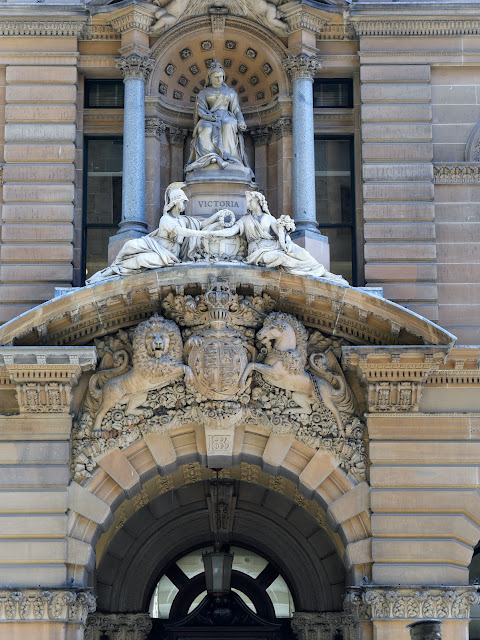 After the modern Sydney with its tall buildings and CBD Cairns was hugely different. No high rises, Just low buildings of a couple of floors and miles upon miles of sea. Our hotel was along the main Marina, a beautiful view. We were scheduled to visit the Great Barrier Reef. This involved a hour long boat ride to a reef from where we were to snorkel or Scuba dive. Corals on the sea bed and multitude of colorful fish were what we were to see. Once again, the level of professionalism by the boat crew and the equipment they handed out was admirable. We all had to wear wet suits to prevent jellyfish bites. I was given a numbered face mask, of course it was not my prescription but it was certainly helpful having my vision somewhat corrected. To be honest, the corals and sea life in the Maldives is far better. The Daintree Rain Forest was disappointing. You were taken on a man made track to see various trees that were in the rain forest. What is unusual is that because of the separation of Continents, the rain forest in Daintree runs to the beach. Thus, you have crocodiles on the beach. Daintree has very large Sugarcane plantations and this forms a huge part of the economy. The drive to Daintree was past lush Sugarcane plantations, that was nice. 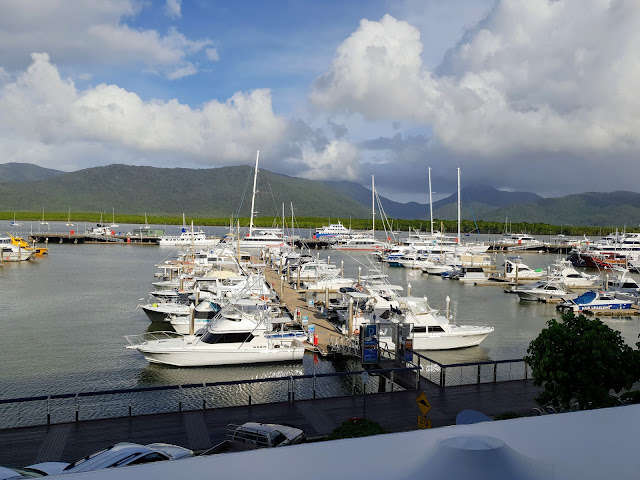 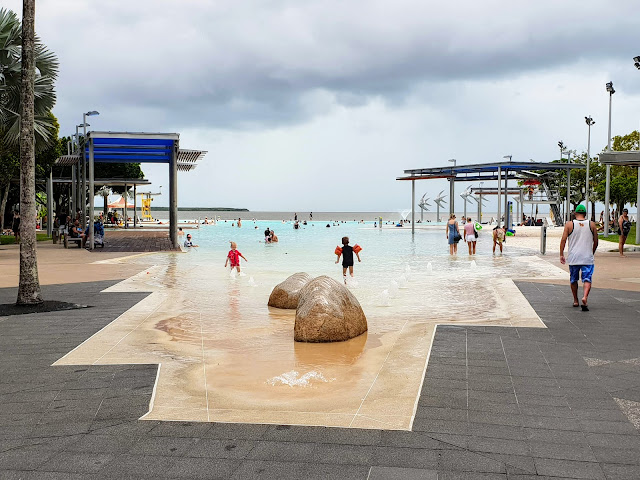 A public swimming pool in Cairns 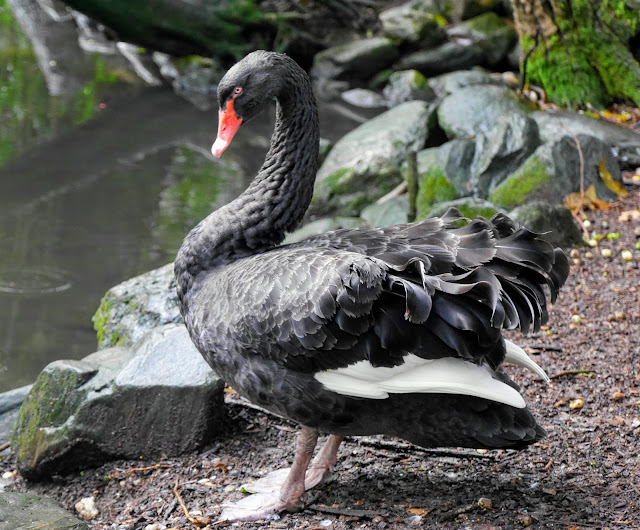 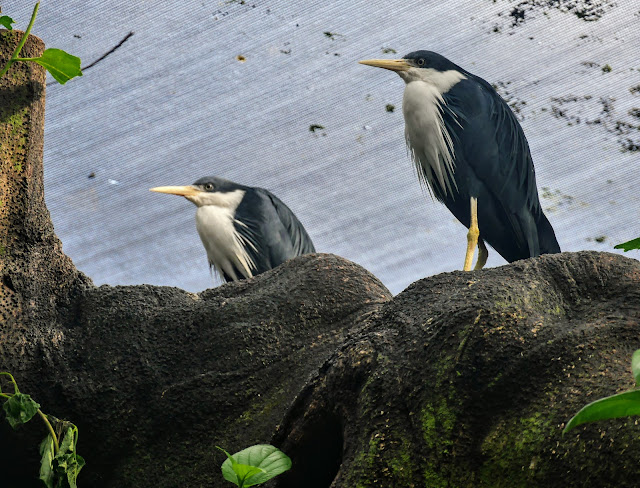 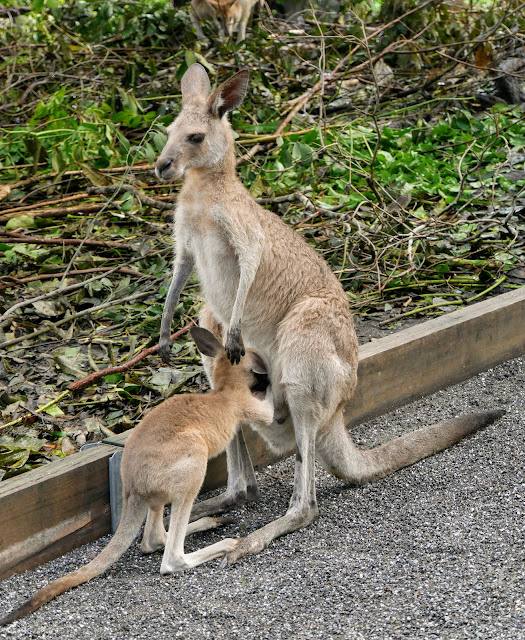 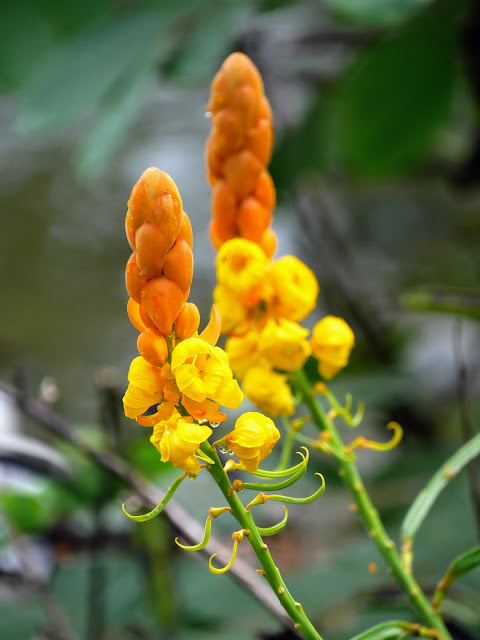 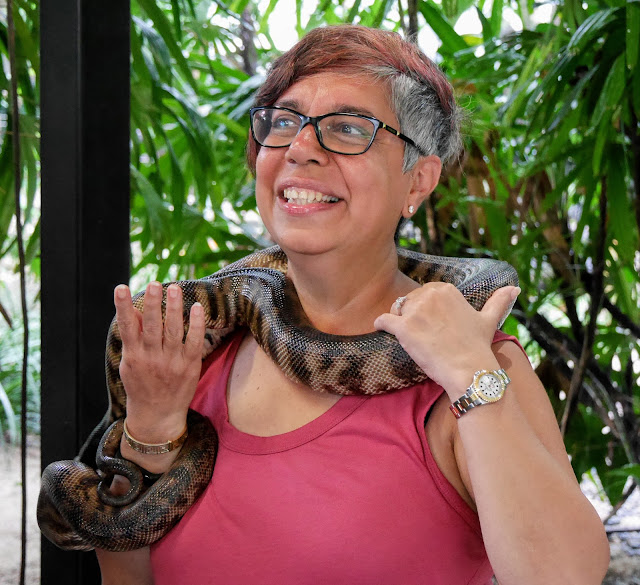 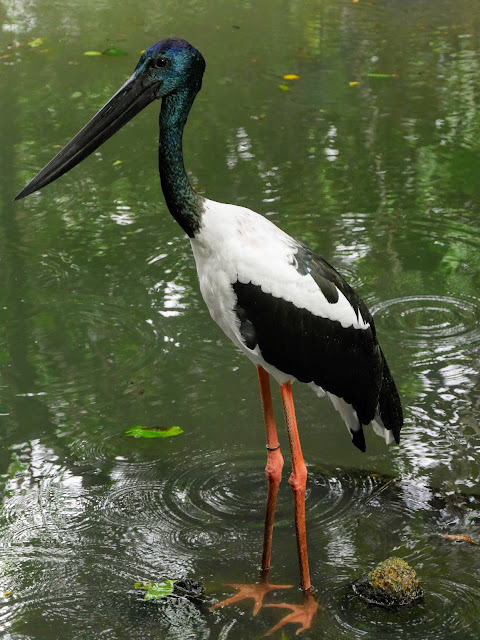 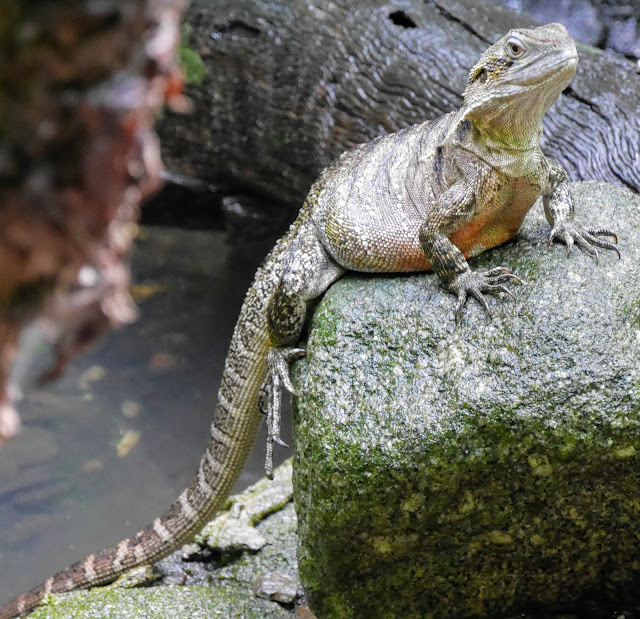 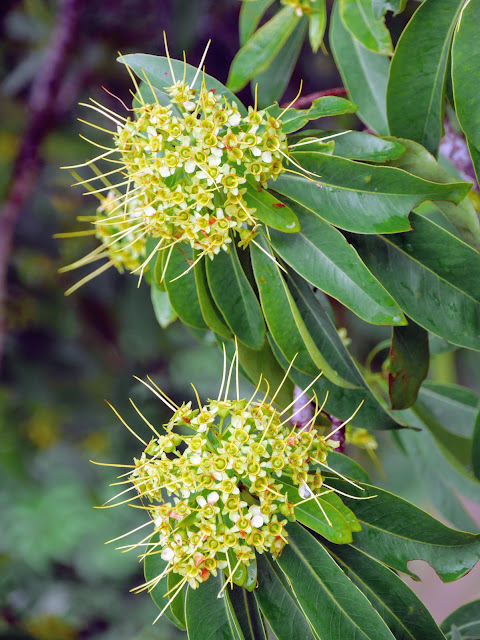 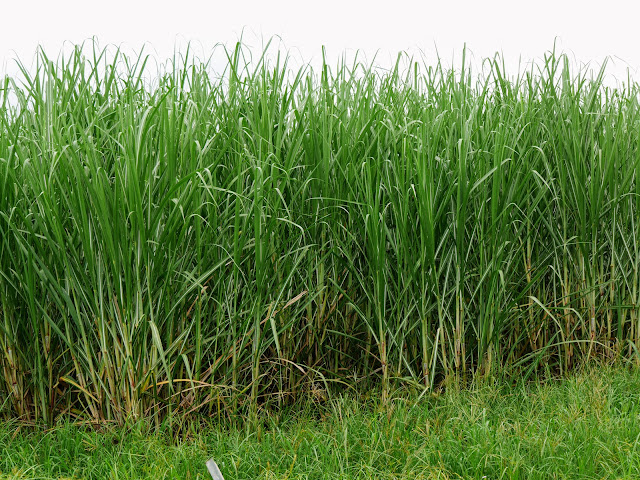 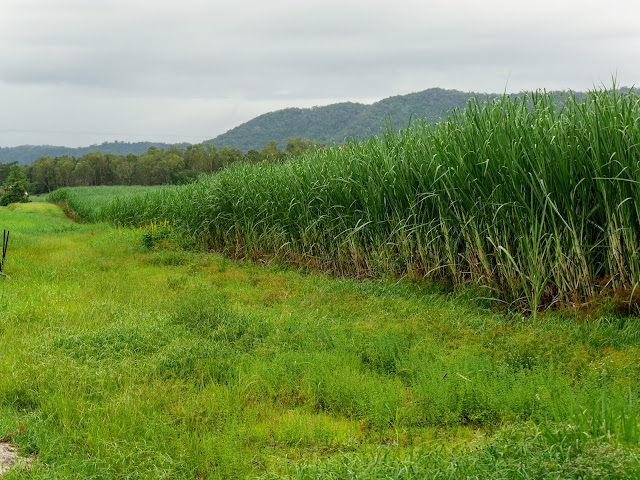 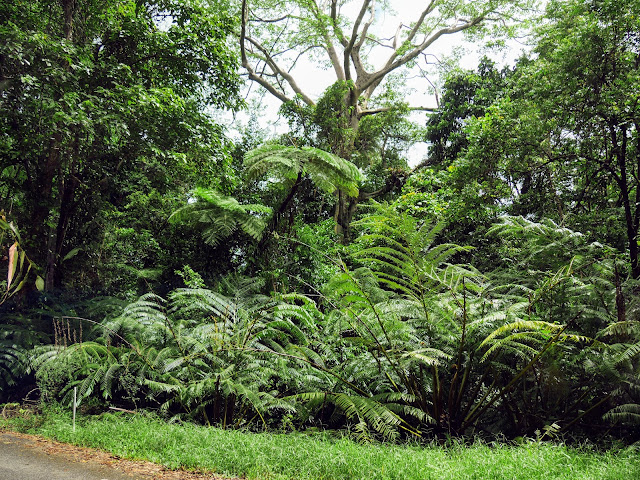 Last up Melbourne. We both thought that it was far nicer a city than Sydney. Seemed classier, several older buildings that were really beautiful. There seemed to be many more people who were actually working, well they wore suits or shirts and ties. The main street is Collins Street where the biggest shops are located as well as the big hotels. The shops are bigger and far better than what we saw in the CBD in Sydney.

The Australian Open was fabulous. Absolutely no regrets going for it. An extremely well managed well organized event. The Rod Laver Arena is part of a large area dedicated to sports. Alongside you have the Margaret Court Arena, the MCG and the Olympic Stadium. Getting to the Arena was absolutely no problem. The complex is within the Melbourne CBD so, if you are in an appropriate hotel like the Hyatt or the Westin it is a walk to the complex. Most players and their entourages stay in these hotels. If you are a bit further afield, no worries, Melbourne has a tram system that is free, yes, free withing the CBD. Getting on and hopping off is really not a problem at all.

The Arena has lots of open spaces. There were restaurants of all types from the upmarket Nobu to humble burger pizza and fish and chip outlets. Lots and lots of outlets selling drinks, alcoholic as well as non alcoholic. Aperol was selling their Spritz and they were popular. Beer wine and even Piper Heidsieck Champagne. You could not go hungry or thirsty. We were entitled to AUD 100 worth of food and drink vouchers. There was a mix up by them, so as compensation they gave us AUD 200 more. That was a lot of money. So, to celebrate the Champagne event we drank glasses upon of glasses of Champagne. 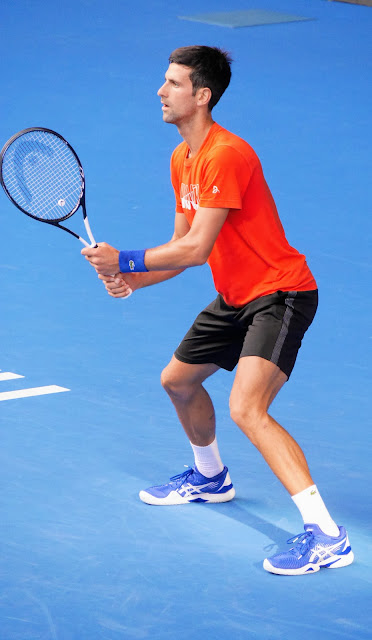 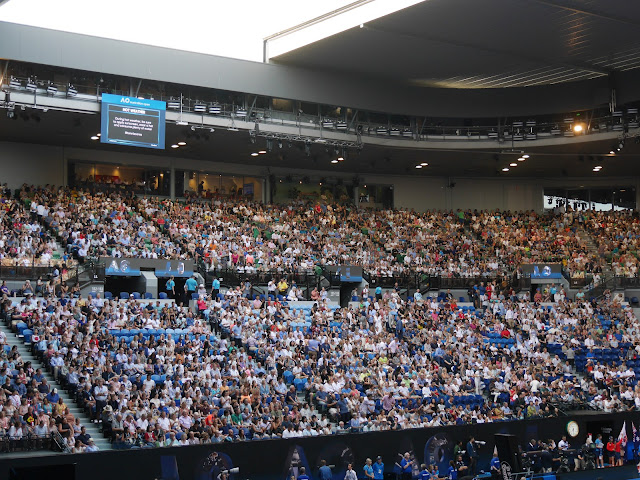 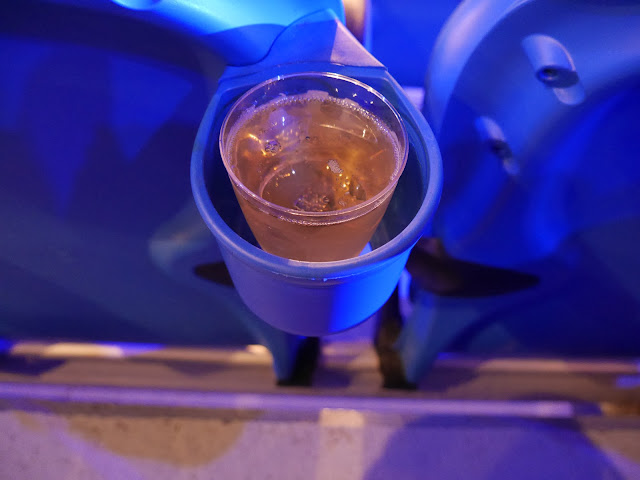 Watching the matches live was a delightful experience. If you had tickets for the Rod Laver Arena, you could watch all matches being played there. So as a bonus we saw the Wheelchairs final, Boys final, Girls Final and the Men’s Doubles. Great fun. You could see how hard the ball was hit, how fast it travelled and how it swung. It was truly fascinating. Absolutely recommended.

Now for the most important question. How did we like Australia? In a word – subpar. To us it seemed like America as it was when we visited 30 years ago. Some very large people waddling. Lots of kids. Poorly dressed and an absolutely casual attitude to life. Many people who you speak to in Mumbai and ask about Australia will invariably reply – great place, I went Scuba Diving, I went Bungee Jumping I went Skydiving. Yes, I agree. But (a) how old were they when they did that and (b) how many years ago was that? To quote a line from Sympathy for The Devil a great song by the Rolling Stones,

“Please allow me to introduce myself,
I am a man of wealth and taste.”

I am 55, I most certainly have more wealth than I did 30 years ago. Everyone does, even poor Anil Ambani. We have all had many experiences over the past few years, we have been around the block. Do you really think that at 55 you are going to Bungee Jump? Would you really want to go back in time and relive and experience something quite mediocre? Is having a drink at Darling Harbour with the hordes really your idea of fun. Unfortunately, it was not for us. We have been used to far better in Western Europe as well as UK. This was frankly, poor in comparison.

In conclusion, would I recommend Australia? Truthfully, if you have travelled a fair amount, then most definitely no. If you are embarking on your first visit besides the usual Bangkok/Dubai jaunts, then probably yes.

Overall, as I have written, Australia didn’t really do it for us.

Posted by Stonethrowers Rants at 7:44 PM No comments: