April has been a month of eating dangerously. We have done the unthinkable. We ate at, if my memory serves me, 6 new places in Mumbai. By new, I mean places we have never been to. Very adventurous on our part. Out of character. The restaurants were:

Farzi Café at Phoenix Mills – A light lunch. Very disappointing. Very well presented food, but missing everything by a mile. Not recommended.

Miss T replacing Busaba in Colaba – The food had Oriental flavours but beyond that rubbish. Don’t go.

Soda Bottle Openerwalla at BKC – A wonderful replication of Irani restaurants, honestly. No complaints with the food. Fully recommended.

If this was not enough, our friends Mr. and Mrs. AA whom you would recall from Yauatcha and bars in Bandra, called and we decided to meet. Mr. and Mrs. AA are like Captain Cook, they are always out to discover new places. So, we placed ourselves in their reliable hands.

What a wonderful decision made by Mr. and Mrs. AA. Drinks at Cecconi’s at Soho House Juhu followed by dinner at House of Lloyd across the road. I was delighted. My quest for good Goan food would continue, House of Lloyd is a restaurant specializing in Goan food.

Cecconi’s was a most pleasant experience. The Bar is on the ground floor and from the airconditioned section you lead out to an al fresco area by the beach. Hot sticky sea breeze tried to cool us. A few beers were ordered and some G&T. Sitting out was nice though, not very pleasant. My beer bottle was wet with condensation and the beer got warm pretty soon. I arrested the temperature rise by wrapping my napkin around the bottle. I do recommend the bar at Soho House. The drinks were quite expensive, or so I thought. A bottle of Kingfisher was Rs 300 ++. Not outrageous but stiff. A large Gin, Tanqueray was Rs 750++.

House of Lloyd is a branch of the original which is in Goa. This is located in a sort of illegal/encroached open area, one level up by an external staircase, in Hotel Royal Garden. To me it seemed that the entire open area which sprawls on three sides, was encroached. There in an airconditioned section, which I would think is the only legal portion. Anyway, all this should not concern us. We were here for the Goan food washed down with some alcohol.

The menu is large, and, covers most of the Christian Goan food. Not much to offer from the Hindu side, but I am not complaining. We ordered a large number of starters. A comment or two on some of the food. The Tongue Roast was exceptional, really good. You really must eat this. The Anant Gadho Ros Omlettes – described on the menu as “Famous Goan street food with eggs chicken and gravy” was (a) not accurately described and (b) a disappointment. Basically, omlettes or even hard cooked eggs are served with a Chicken Gravy. That is what I thought we would get. What turned up was an Omlette Sandwich with gravy serving the purpose of butter. The Pomfret Caldeen was excellent too. 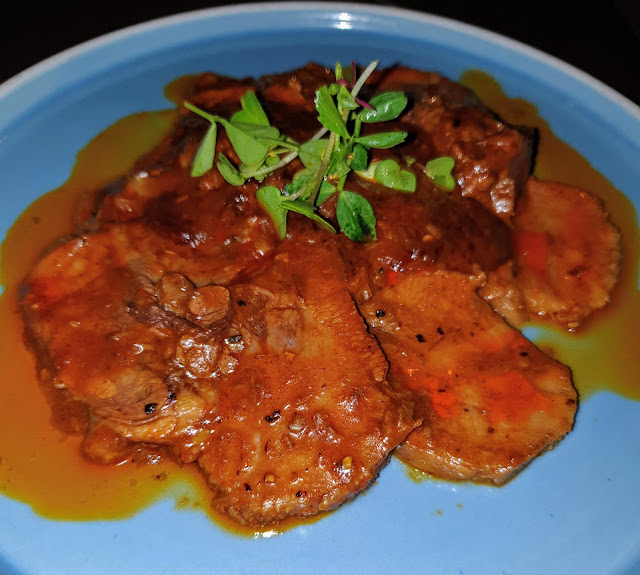 Above: The excellent Roast Tongue 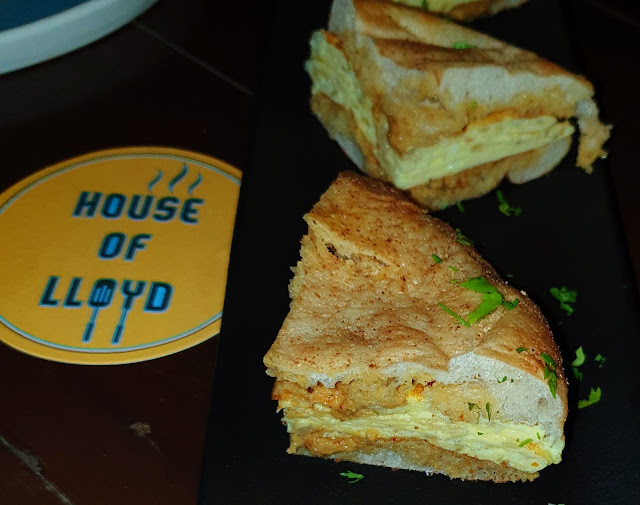 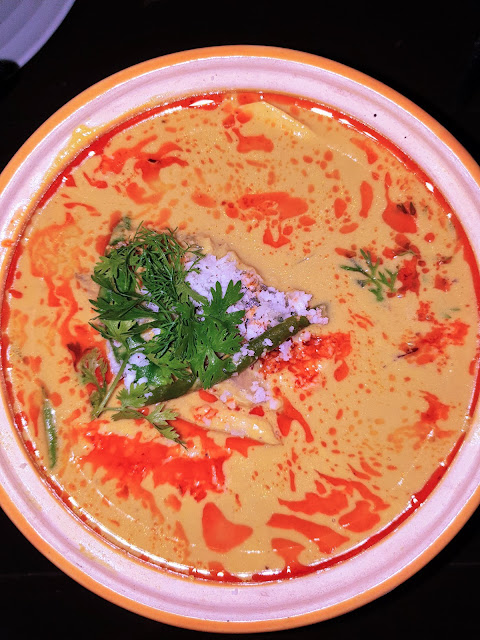 The menu had a rather strange section. It consisted of Pork Chops and Steaks barbequed. This is served ‘Conti’ style with mashed potato and grilled veg. Much like Club food. A pork chop was ordered. Decent but I can’t understand why it’s on the menu. 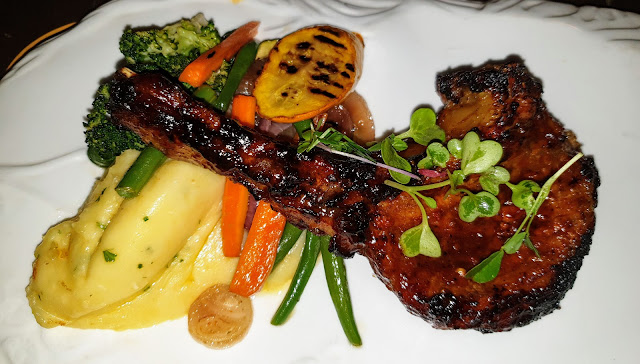 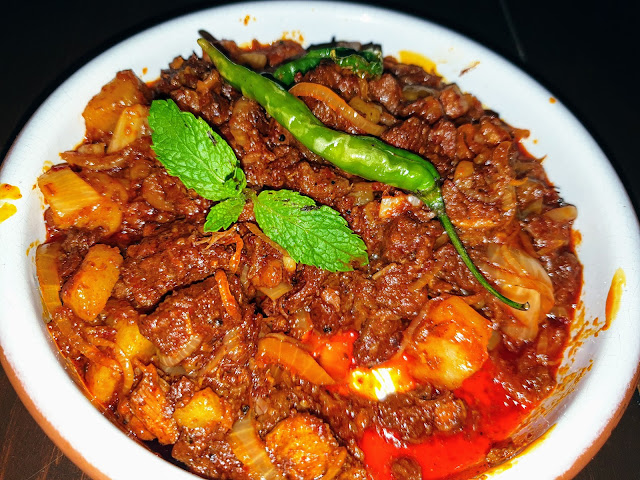 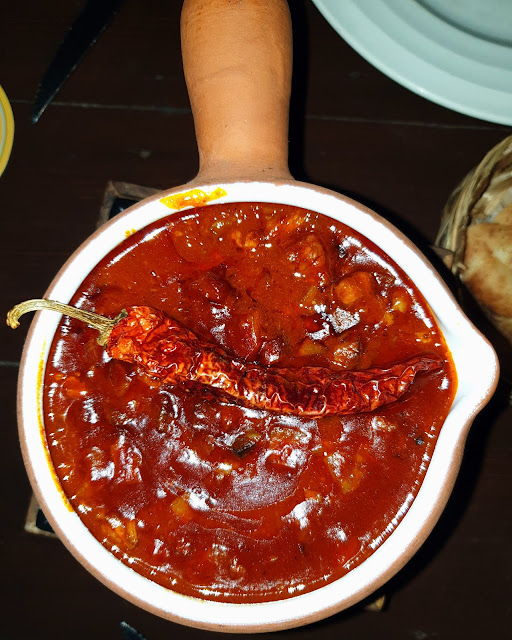 Above: Pork Sorpotel. Good, with a decent amount of Pork Liver. 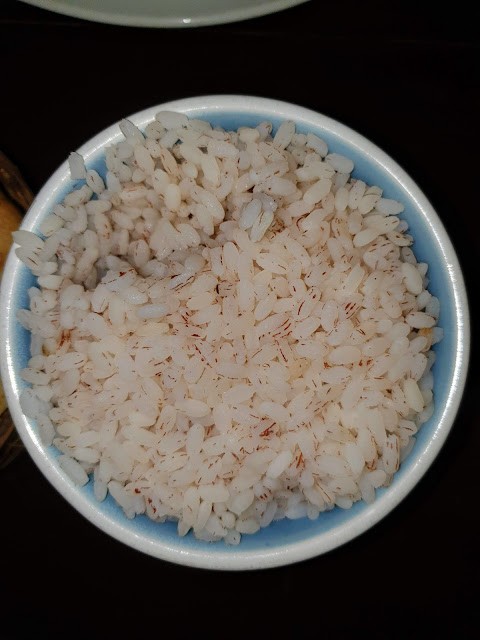 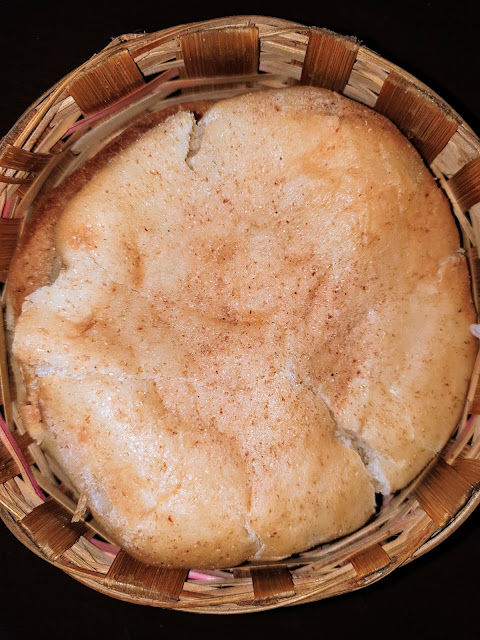 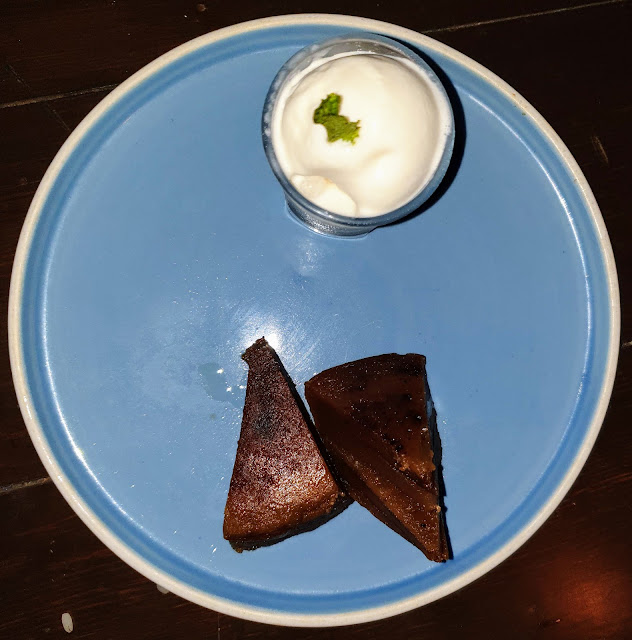 There was one problem. Without exception, the food came out warm, not garam. Eating warm as opposed to hot food is a big disappointment. This was a serious complaint.

The other problem was the staff. Absolutely clueless, obviously cheap labour. You know the cliché, pay peanuts get monkeys. This restaurant staff emitomised the cliché. They knew nothing about the menu, they ran around like headless chickens. For some inexplicable reason, they placed a carafe of clear liquid on the table. HRH the Queen of Kutch thinking it was the Tonic, poured the contents into her glass of Gin. Nope, it was water. Then the palaver of returning the Gin. The waiter was shattered, probably he would get blasted. This madness of getting a carafe of water with every order of Gin and Vodka continued thru the evening.

All in all, it was a most pleasant evening, thanks to Mr. and Mrs. AA scintillating company and the wide-ranging topics of conversation. Do I recommend House of Lloyd? Most certainly, but with a caveat. Take the food home and heat it. You will have a much better experience. Remember, curry based food, most of which this was, reheats perfectly.

Posted by Stonethrowers Rants at 1:16 PM No comments: