O Perdo - revisited. How the mighty have fallen

Readers will recall that we had a good meal at O Pedro which you can read here. When we left, we felt that the menu had lots of dishes that we needed to try on a future visit.

That future visit materialised and the quartet comprised of the two of us accompanied by Chef Tarantino [obviously not his real name] and the Suburban Sardarni. We would have a few drinks at the Spin Bar at the MCA and then walk across to O Pedro for our dinner reservation at 9.30pm.

In my previous post I mentioned walking past the comatose Hemant Oberoi. This time it was more populated. Butterfly High was positively heaving with people. Strangely, Gateway Brewing Room was stone cold dead. Is the fad of microbrewery beer dying? O Pedro was full and lively. We were all surprised at how full O Pedro was for a Sunday night.

Drinks were ordered and so was the food. The evening began with the superb Red Snapper Ceviche. Excellent, most impressive, as good as the last time. Cold tangy coconut based sauce, Fried fish and crunchy Tempura batter to add superb crunch and texture. This is a dish that can hold its own in any restaurant. 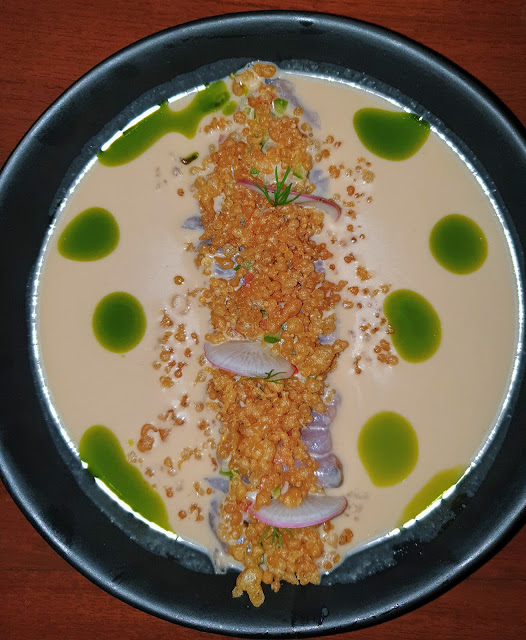 Red Snapper Ceviche
Our server was proudly telling us that the Red Snapper Ceviche dish is also available in a vegetarian version with mushroom. He was also very effusive in his praise of a Tomato and Burrata dish. So, on hearing his peans I said get us a plate. Very pretty looking dish, but, unfortunately, very mediocre. The green sauce you see was supposed to be a Green Tomato sauce. It did not taste of anything. Honestly, it tasted like pureed Avocado with mouthfeel and texture to match. Seemed like a Gujju Jain crowd pleasing dish. 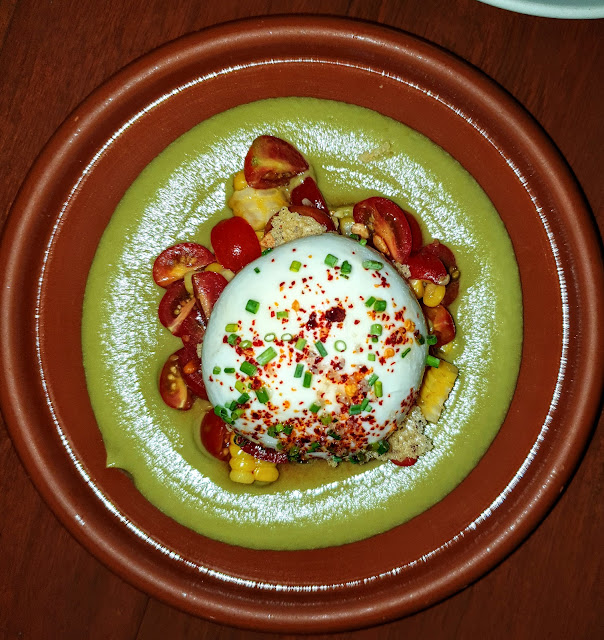 Tomato and Burrata
Then we ordered Bone Marrow a new dish on the menu. Bone Marrow is a signature dish at St. John, Fergus Henderson’s path breaking restaurant. There it is served simply with just fresh parsley and salt. Bone Marrow is also very popular in classic French Bistro’s and the famous Italian dish Osso Bucco uses Bone Marrow. I must confess that getting Bone Marrow in India is very rare. Most Bone Marrow is Mutton Bone. However, in the European context Bone Marrow is Veal, a much bigger bone yielding much more marrow. O Pedro served Veal Bone Marrow. The bone was cut across with a band saw. This is correct. The bone is not shattered by using a cleaver resulting in dangerous shards. Lastly, Bone Marrow is a waste product. The restaurateur buys it at a throwaway price, literally, value adds, and sells at a big premium. Great way to make money. The Marrow was roasted and served with a curry sauce and garnished with toasted Panko. The dish was disappointing. The Bone was not hot enough and neither was the gravy. The melting texture of Marrow was simply missing. Eating chunks of fat is not very much fun. They could have halved the bones along their length exposing much more marrow and then grilling. That was the marrow would turn unctuous. 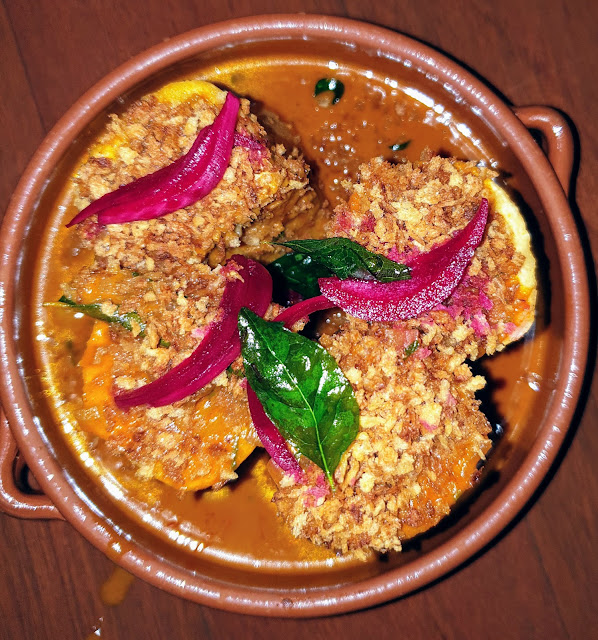 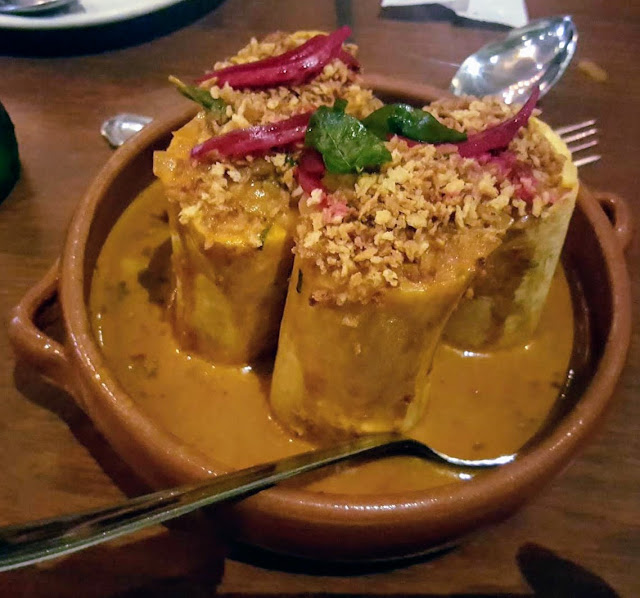 The Bone Marrow was no fun. Unfortunately, that was the theme for the rest of the meal.

The Bacon and Goan Choriz Rice was as good as something we can make at home. Alas no photo.

Another special was Whole Roast Suckling Pig being served at Rs 1800 enough for 4 to share. I could not honestly believe that you can get a whole roast sucking pig for Rs 1800 neither could it serve just 4. The animal is much larger and I would think much more expensive. Something did not compute. Anyway, what finally turned up was not a whole Roast Suckling Pig by a mile. It was a portion carved out with a couple of shards of crisp crackling. The Meat was well cooked but bland. Accompanying the Pig was a plateful of sauces. The homemade Green Chilli was the best. You also got mini Poe and some sort of soft Taco. So, you had the option of either making a Burger or a Taco. One the whole I can give full marks for the conceptualising of this dish. Execution is another matter. Poor, in a word. The whole dish was simply bland. 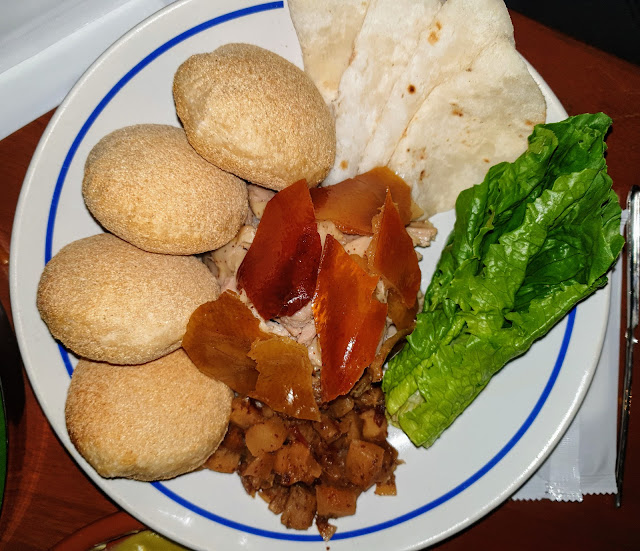 Clockwise from right: Lettuce, Apple, Mini Poe, the 'Taco' and Suckling Pig with Crackling in the centre 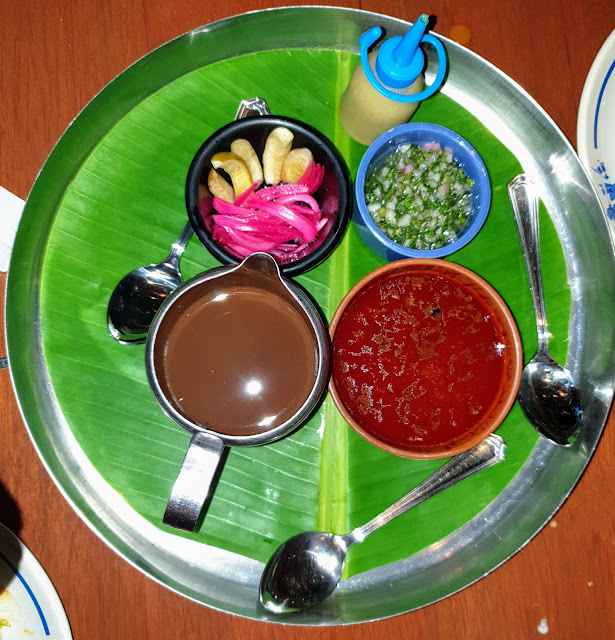 We had also ordered a Pork Rib Vindaloo. In my opinion this was not a Vindaloo. Vindaloo is a dish that gets its name from the Vinegar used to make it. This dish should be sour. This was anything but. Sad, completely missed the mark. 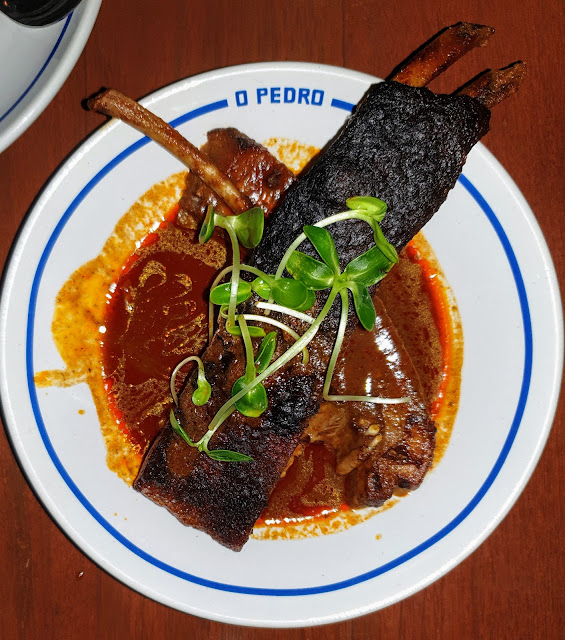 Pork Rib Vindaloo
With the consistent and catastrophic decline in the food after the Ceviche, none of us felt we should throw more good money on a dessert.

Personally, I was shocked at how standards had fallen. No one was tasting the food that was being served. The sauces were with the exception of the Ceviche, misbalanced. The food was generally bland. All the food, once again with the exception of the Ceviche, was served lukewarm. Was it just vats of premade gravy/sauce that were being used? Was all the food precooked and simply an assembly job? I do not have any answers. The tragedy was that we had Chef Tarantino and Suburban Sardarni with us who came under the impression that the food would be top notch. It was my recommendation. The silver lining was of course the solitary dish, Ceviche and, the servers. They were knowledgeable, friendly and the casual style refreshing.

As we left into rain bucketing down, the B B King song came to mind.

“The thrill is gone”

Posted by Stonethrowers Rants at 6:03 PM