On our return from Oxford we had book a show at the Royal Albert Hall. Main act Eric Clapton and opening act Andy Fairweather Low. Obama was in town and like in Mumbai traffic was a mess. So we caught a taxi and he whisked us thru Hyde Park to the Royal Albert Hall rather than the bus route which went from the traffic laden Park Lane – Knightsbridge – Kensington route. The venue was absolutely magnificent. Many entry gates and your ticket had a gate marked. No confusion or dhakka getting in. We had good seats and we sat down to enjoy the show. The shows were good. We knew the set list so walked out during the second last song got into a cab and went off for dinner. The decency and civility of the crowd as well as the absence of security is eye-opening to us Indians.
Next day buzzed around London and got odds and ends tied up. Dinner was booked at Bar Boulud the London outpost of the Lyon born New York based chef Daniel Boulud. It was a large loud casual brasserie/bistro style. Great atmosphere but a bit too noisy. The food is deeply influenced by Bouluds Lyon upbringing so there is lots of Charcuterie. We first ordered a plate of Charcuterie to share. We got `homemade’ ham brined for 4 days and cooked sous vide, a pate, salami, tête de veau, and a `tagine’ basically lamb confit with Moroccan spices. All very good. I was still hungry so we ordered one more plate.
Starters done, we ordered his highly touted burgers. A French chefs tribute to America. Arti ordered the Frenchie Burger which was a burger with confit pork belly and I had the Piggie which was a burger with all American pulled pork with a spicy barbeque sauce. Both of us ordered frites. The burgers were frankly all right thought very under seasoned. The pulled pork which I ate for the first time despite reading and watching TV shows on it was underwhelming to say the least. The burger buns were brioche and therefore nice to eat. The frites were really frites. They were neither the usual chips nor the McDonald type frozen French fries. The frites were really good. Worth 13 pounds probably not. The wine we had was very good. The deserts were also top notch. They don’t allow photography so after the first two photos I was tapped on the shoulder. So pardon this.
Today the weather has changed. It’s absolutely bucketing down complete with sound and light. Thank God, I was going to ask for my money back, it has been like an Indian summer here. Tonight we go to our favourite restaurant Le Gavaroche for a last big meal. 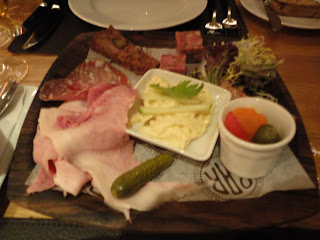 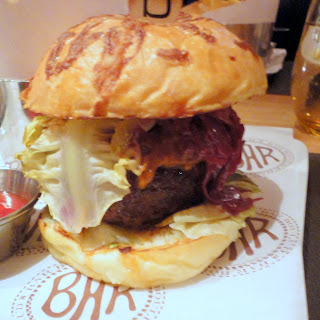 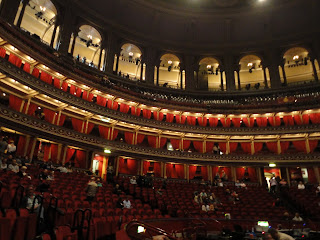 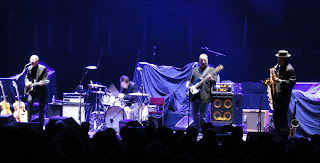 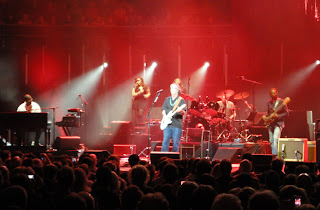 Posted by Stonethrowers Rants at 5:31 PM