We ended day 2 in Delhi with a superb dinner at a restaurant called Gulatis at Pandara Road. Pandara Road has a clutch of Punjabi restaurants all started/owned by Hindu Punjabis who fled from what is now Pakistan. There is one fool who has opened some Chinese restaurant in this predominantly Punjabi enclave. Everybody has their favourite restaurant, `Have More' or `Chicken Inn' or `Gulatis'. None of these restaurants serve alcohol.

Gulatis is a large restaurant full of happy punters, licking their fingers, devouring their food. The food itself is old style Punjabi Hindu food. It’s not Mughalai. You have the classics of Tandoori Chicken, Butter Chicken, Black Daal, etc etc. We had Tandoori Chicken, Butter Chicken, Yellow Daal and Roghan Josh. It was all brilliant. The butter chicken was so different from what is available in Mumbai. It was with a light gravy, not sweet, not masala not full of dairy. It was delicious. The food was fit for the Queen. She daintily liked her fingers.

The next day we went to one of HRH the Queen of Kutch's friends house at Gurgaon. The friend had just had a baby. This was our first time to the new developments we hear so much about in Gurgaon. She had a delightful flat on the ground floor. After that we drove back to Delhi and had a walkabout in our local mall. A very good mall I must say. What amazes me is the quality and quantity of cold cuts, marinated meats and, strangely, the stacks of pasta available. The quality of the vegetables is so high. Tragically, we cannot buy any of the veg.

Dinner was at Karims. This was truly beyond belief, historic. Fabulous Mutton Burrah Kebabs, Badam Pasanda, Mutton Ishtew with their tandoori rotis.

On to Amritsar. This is where Sardaras come from. The day was like a Sardarji joke. It was foggy in the morning so all flights were delayed. We were waiting in the line to check in and when our turn arrived we were told that our friend travelling with us was being offloaded. The purported reason was she had not telechecked and the flight was closed. Of course we protested, of course nothing happened. The two of us boarded the flight, landed in Amritsar to find our bags had not been loaded. Yes the whole rigmarole of complaining was done. Finally our friend and our bags all landed at 7 pm.

In the day we went to the Golden Temple. I must say it was fairly impressive. The scale is huge and the place is reasonably peaceful. We waited in a long line to get to the sanctum sanctorum, the Harminder Sahib. The wait was an hour but the weather was good and the crowds peaceful. The most impressive thing was there were no pimps, touts, hustlers, undesirables, slime balls, one armed/legged/eyed beggars and similar detrituous you get around temples/monuments in India. All the volunteers were most friendly and helpful, one told me to put my wallet in the front pocket, the other explained the concept of Prasad, and the guys collecting shoes were very, very decent [yes they were doing Seva].

I was struck by the relative silence and calmness despite there being literally thousands of people all around. In the sanctum sanctorum there are bhajans being sung. These are broadcast all over the complex not with large speakers blaring but with hundreds of speakers all around. Dispersed sound. I wondered how they managed it. The answer was simple. They have used state of the art Bose Public Address systems all with the computerised time delays so that the sound is controlled and the speaker with the shortest wire does not fire before the speaker with a longer wire and create a cacophony. Please see the photo of one such speaker. Please also see the photo of the Omega clock obviously donated by a rich Sardar.

The Sikhs are experts at crowd control. The masses, equally washed and unwashed, are kept in check by large Sikhs with fearsome beards carrying a 7 foot spear and wearing, would you believe it, a caftan!

The Prasad concept was intriguing to say the least. At one level its agnostic and practical while in the other its pure la la fantasy land. What happens is you buy Sheera at a window. Its handed over to you in different amounts depending on how much you pay. This is simple sheera, full of ghee, sugar and a deeply caramelised semolina. No nuts, raisins etc in it. Then you hold this in and stand in a long line carry it to the sanctum sanctorum where more caftan wearing Sikhs take it from you put about 50% of the sheera into a communal pool and give you back your depleted packet. This becomes Prasad, why? Because its been blessed!!!. See what I mean. Our blessed Prasad was given to our cycle rickshaw puller who seemed to enjoy it. After eating it he was still pulling the rickshaw, albiet with more vigor after all the calories. Poor chap did not get much salvation.

On the whole, a nice experience. Well worth it.

Today, we try and attend the Langar and go to the Wagah border. 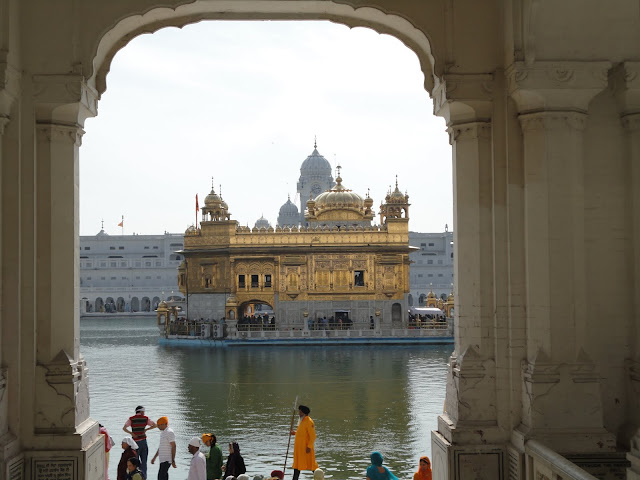 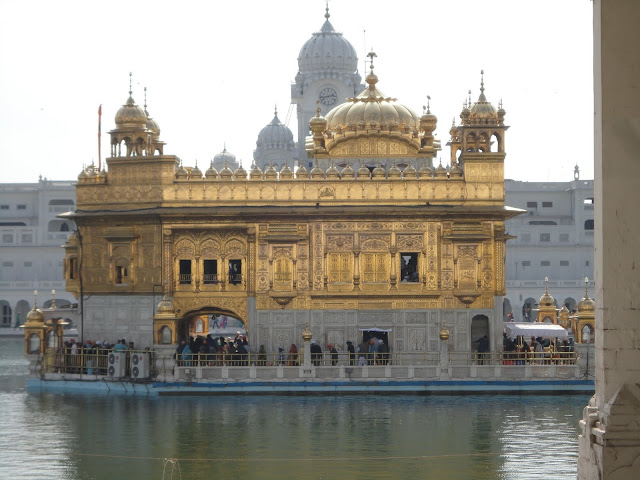 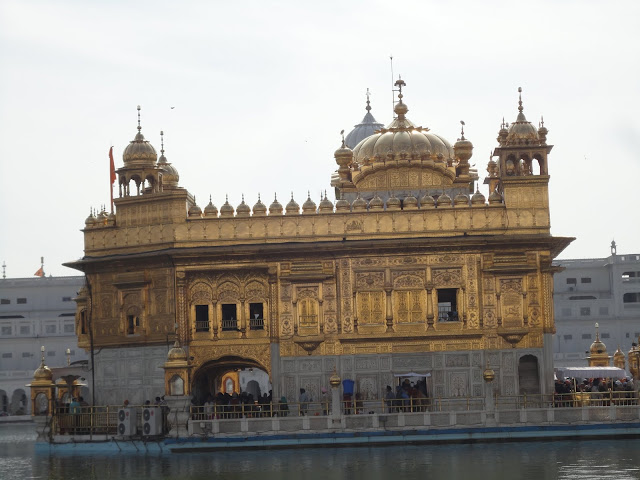 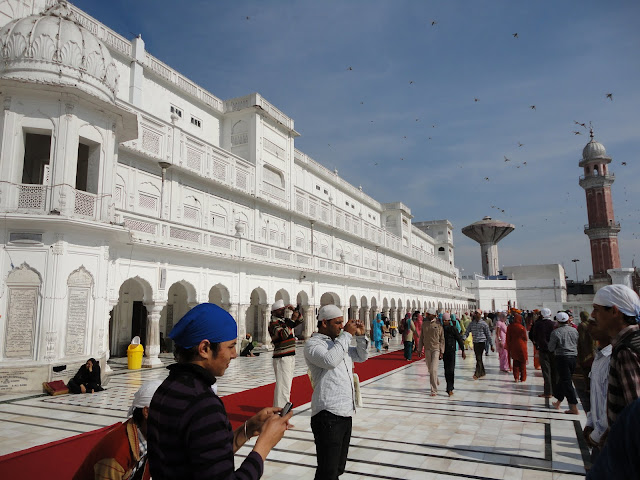 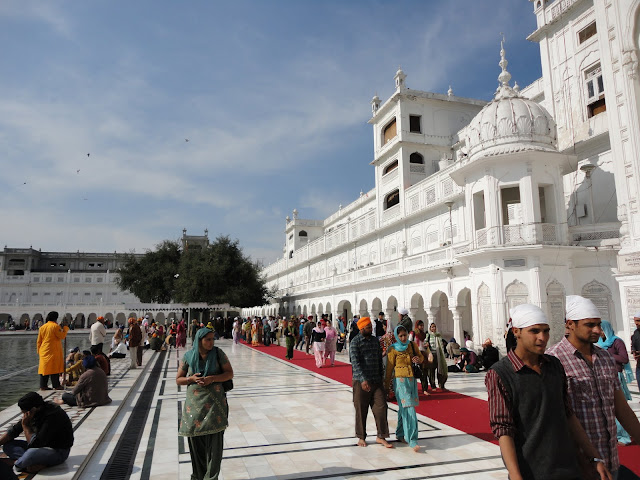 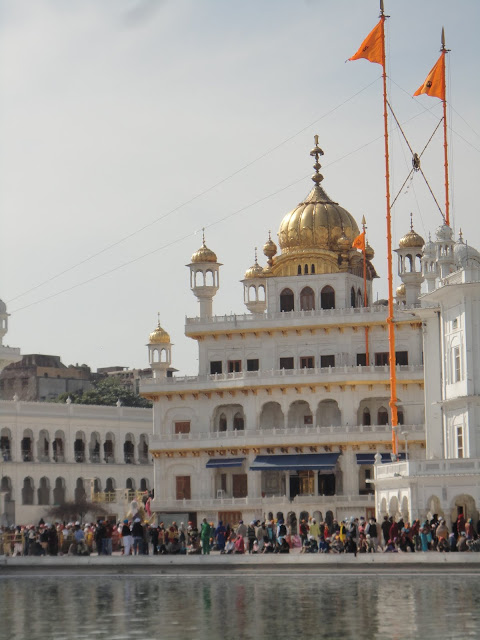 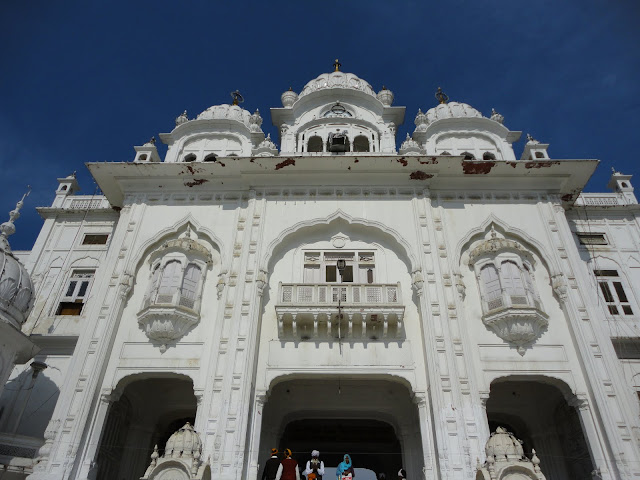 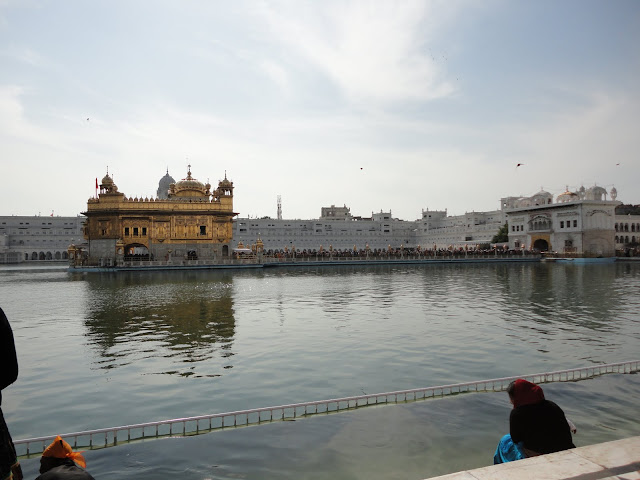 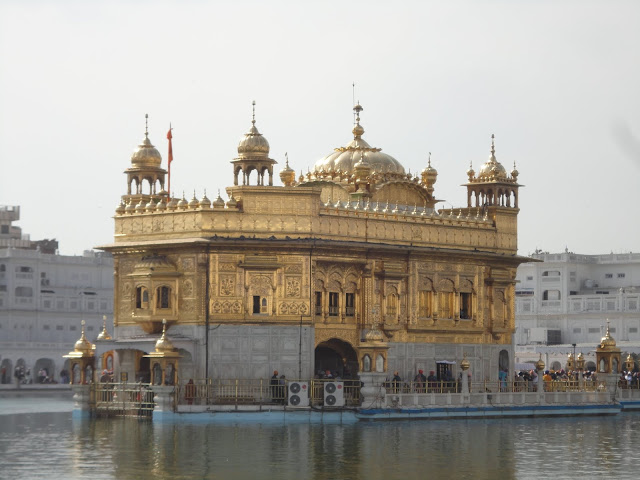 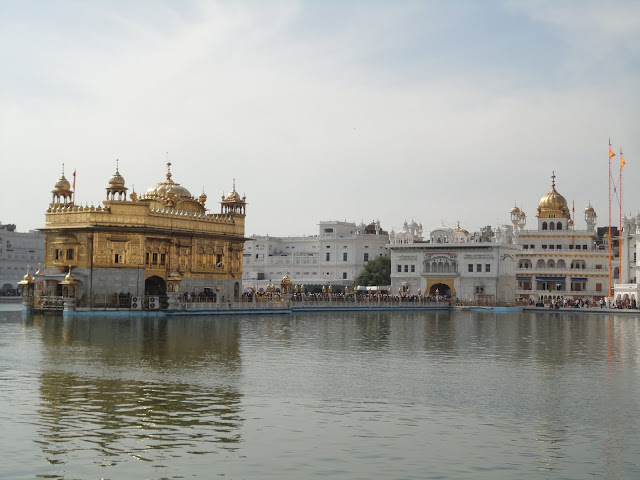 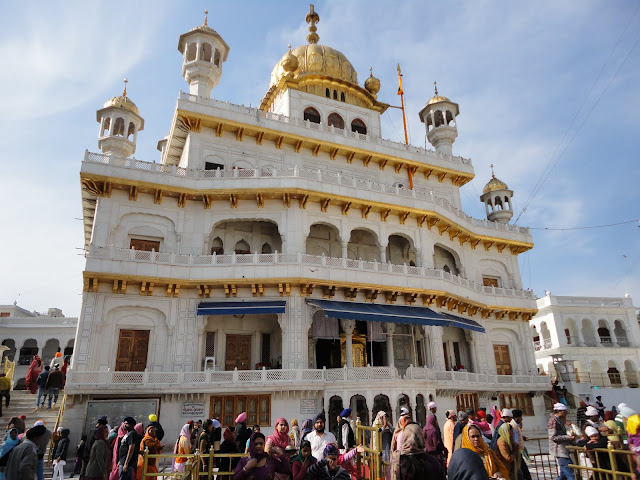 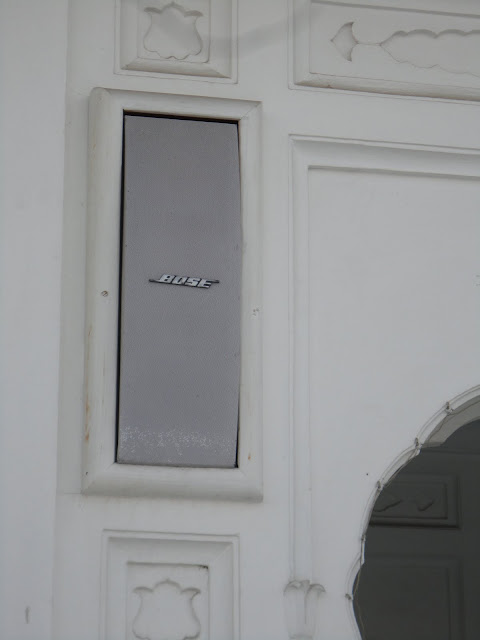 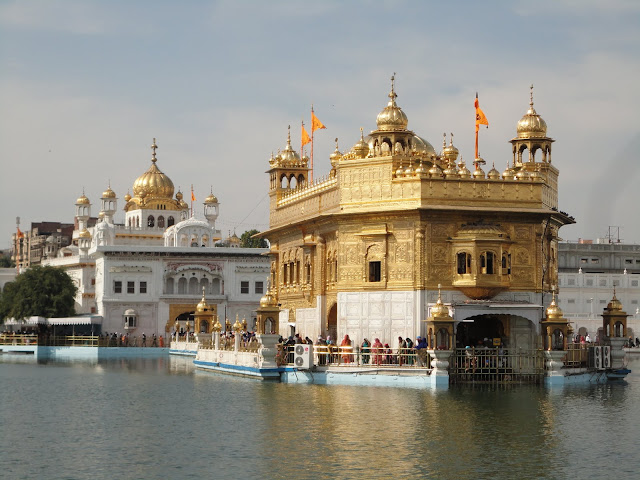 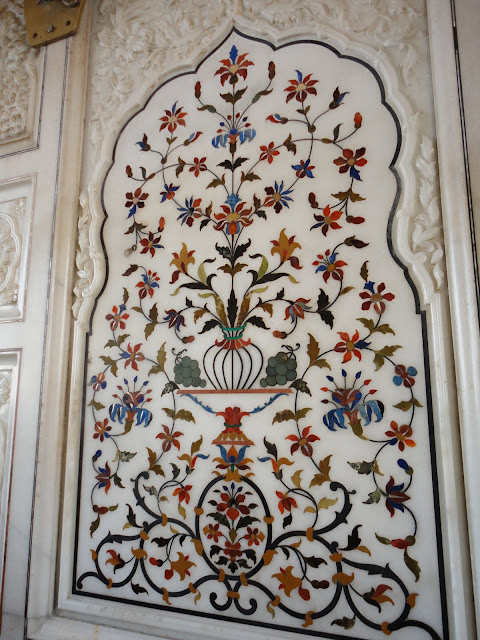 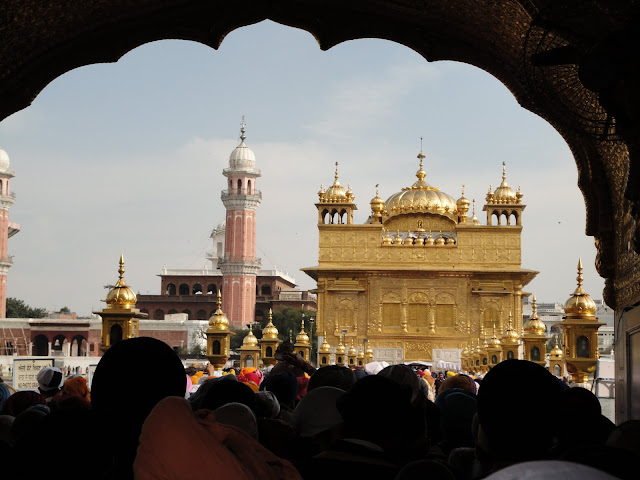 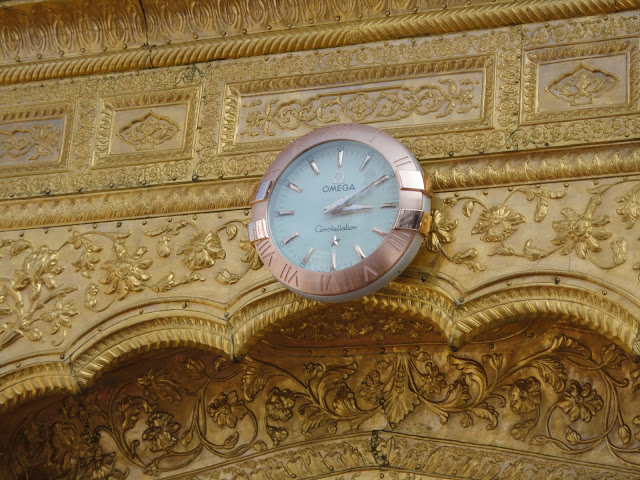 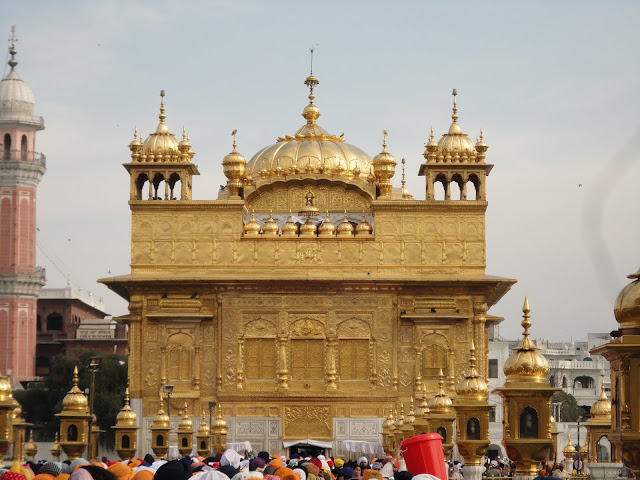 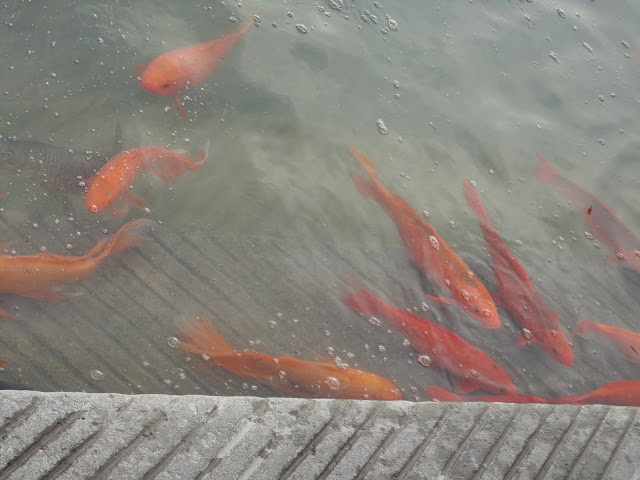 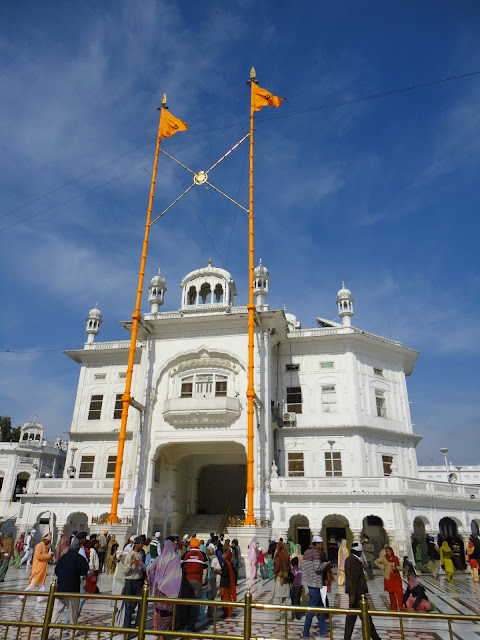 Posted by Stonethrowers Rants at 10:03 AM