The first night we had dinner at a Portuguese Restaurant called Litoral, just a few yards from the hotel, depending which exit one got out of. We ordered a Portuguese sausage as a starter. This was cooked on coal. Not bad and quite unlike a Chorizo from Spain. Much milder. For our mains we ordered African Chicken called Frango  something and the classic Fejioda. The African Chicken was astounding. So Indian. It was chicken with skin deep fried and then cooked in a masala of onion, tomato cumin coriander and paprika garnished with fried potato. It was delicious. It tasted like a Parsi fried chicken dish. We could have been at Race View Hotel Mahableshwar and it would have been chicken cooked exactly this way. In fact the Parsi’s call a chicken a Frango. Amazing. The Fejioda was also Indian in flavour. This was Rajma in a tomato sauce with Pig Ear, Ribs, Knuckle and hoof. Lovely gooey sticky redolent with collagen. Yummy. No place for desert.
Day two was my birthday. So we started the evening with a glass of Champagne at the Moet Chandon bar in the hotel. The first time we had done this was a couple of years ago when we were in Berlin. The department stores there had Champagne bars all over. Gosh it was wonderful having a quick glass of champage and just tuning out. So sophisticated so delightful so cool so correct. So after the glass of Moet Chandon Imperial we switched to the Moet Chandon Rose Vintage. Lip smackingly delicious.
Then we were off to a Chinese restaurant  called Canton. Yes it was Cantonese restaurant. Frankly according to me the best version of Chinese food there is. Starters were an absolutely wonderful re-interpretation of Peking duck. Here it was crispy suckling pig skin [Char Sui style] with a pancake and cucumber served with sugar and Hoisin Sauce. Work of art. Brilliant. Please see the photo for the chef’s knife skills. Then we had a classic Sweet Sour Pork. However this version had peach instead of Pineapple. This was probably the most wonderful stuff you can have. Not the bastardised Indian version with the gloopy corn flour thickened sauce but a really gooey sticky candied sauce with crisp pork cut with the tang of vinegar and the faux heat of the yellow bell peppers. All texture. The peach was also a wonderful texture and taste. Superb. With this we had a Fried Rice with egg white and Conpoy. Comforting. The last dish was a braised bean curd with minced pork. A mild version of Mapo Tofu.
Day three was a trip to another Portuguese restaurant for dinner. This was preceded by another couple of glasses of Moet. This restaurant was a disappointment. Maybe we ordered wrong but we did not like the food. I had a Caldo Verde [Portuguese Potato soup with Kale] which was nice. Arti ordered a Pig Ear salad which had onions. Being Jain she had to grit her teeth and have the salad. Let me tell you it’s not easy eating through gritted teeth. For mains Arti ordered sautéed bacalau with egg and straw potato. This turned up as a scrambled egg and thin strips of Bacalao with red and yellow peppers  and I got a clam and pork. Both were poor dishes. The scrambled egg was hopelessly overcooked and horrible just one degree away from separating the protein in the egg from the water. My dish was middling. Not a good meal.
Lunch/Brunch has been a bowls of noodles at a restaurant. Not much to write about. See the photos. The long brown thing you see is a typical Chinese bread that is deep fried. Tastes something like a Churro. 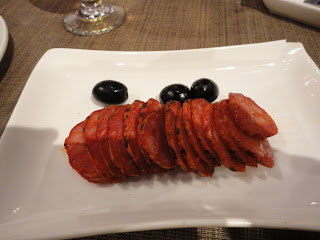 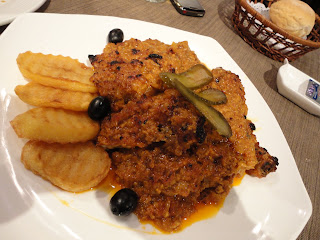 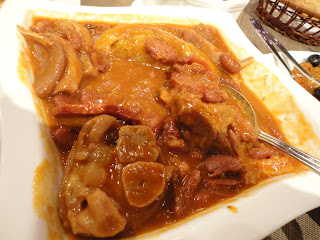 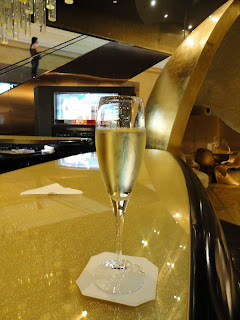 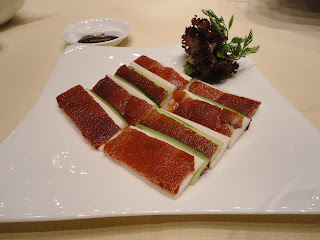 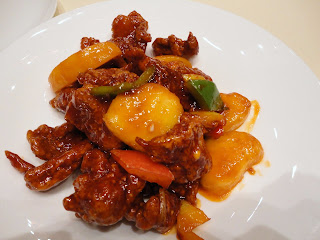 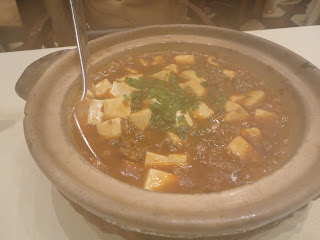 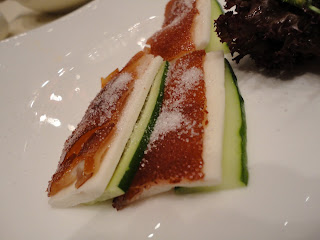 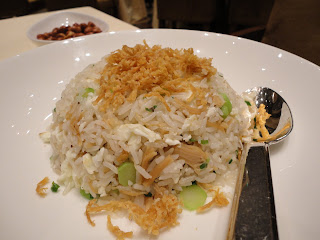 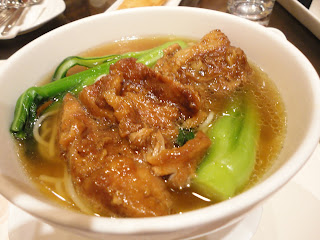 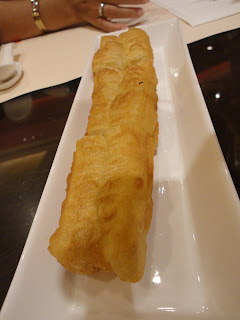 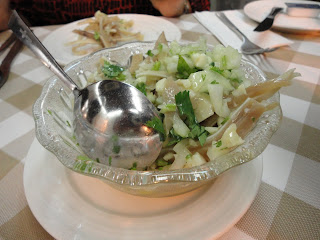 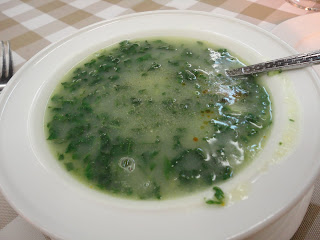 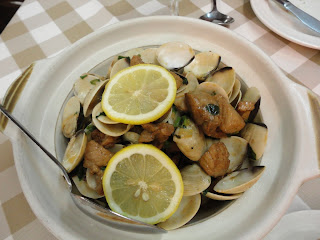 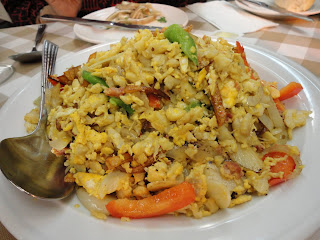 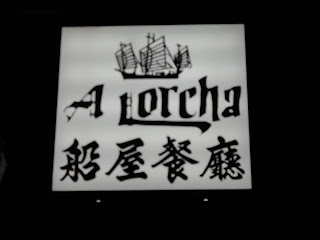 Posted by Stonethrowers Rants at 12:17 PM