We arrived in London on 9th December and spent the day in Marylebone walking about our old haunts. Many shops have changed, many are the same. The Main street has been decorated with Christmas lights. Lots of the big roads here have been decorated with lights. Its really quite nice walking around at night when the lights are on.
The weather is just beautiful. Its an almost balmy 7 degrees and there is a spell of warm weather around. We don't really need our full complement of warm clothes and it's quite pleasant walking around. Walking around is what the whole of London is doing. Shops are absolutely crowded and overheated, the streets have hordes. At many places there are children singing Christmas carols and members of the Salvation Army are at street corners playing Carols on wind instruments. It's all quite pretty and delightful.
Yesterday as we were in the Marylebone area we popped in for an early lunch at a British Restaurant called Canteen nearby. What an absolutely delightful meal. We shared a Mutton Pie and a Roast Pork with Apple Sauce. It was really good food.
At night we were to meet an old friend of mine. We had a quick drink at his house and walked across to a pub called the Warrington. This is one of the 2 or 3 pubs that is run by the Gordon Ramsay Juggernaut. The pub is on the ground floor and the dining room on the 1st floor. What an absolutely beautiful pub. The place has been lovingly restored. It was simply stunning. Have a look at the photos of the inside.
Arti had a Mulled Wine. A first. A Mulled wine is something you get recipes for in all foreign magazines Christmas issues. Making one is generally not something we do in India. So here was a good reason to have one. It was a warm sweet alcoholic drink full of fruity/citrusssy and spicy flavour. Quite a good drink but a bit too sweet to drink seriously. After a drink we went upstairs to have our dinner. I had a cocktail which was whiskey, orange peel, angostura bitters and a dash of Amaretto. Nice, smooth and not too sweet.
Arti had a Cheddar Souffle and cod for mains and I had a Salt Beef as starter with Braised Pork belly as mains. Our food was really good. I got a lot of crackling which was lovely.Arti seemed pleased with her fish. The problem with the dinner was that service was absolutely schizophrenic. The manager was a good looking French boy perfectly friendly but totally ineffectual. One guest at our table got an incorrect dish [he ordered cod and got pork belly] So that was changed. The food was good but service needs some Lithium tablets to put it right.
Today we had a long walk down to Soho and went to the liquor store to get some bitters [lovely Grapefruit] and some orange and lemon. Then onto some of the big bookshops. Lunch was at a Hong Kong style diner where we had our beloved Noodle soups. Roast Pork for me and duck for Arti. As I say, nourishing, light tasty hot and has all important food groups. Quite nice.
A walk back to the apartment thru Jermyn Street and Old Bond Street onto Oxford where we had to fight hordes to walk. The entire pavement was a throng of humanity. It was really really crowded. So much so that we both got extra vigilant about our pockets.
Dinner was at a friends house.
Sunday started with a gander down to the Farmers market. Arti had her 6 Oysters for breakfast. She had frozen fingers handling the 6 oysters. I told her to spare a thought for the guy who was shucking them by the dozens in the freezing cold, with ice on the oysters wearing nothing on his hands but a pair of latex gloves. We bought some Rocket and a bottle of home made tomato sauce. The down to the butcher where we got a sausage roll. Then we went to the La Formargeirie cheese shop where we got and absolutely superb Brie infused with Black Truffles as well as an Aged Lancashire Poacher [we are in England]. Two bottles of wine to wash all this down a light Red and a White.
For dinner we have a feast. One of the finer butchers in London is a guy called Jack O Shea. He supplies really top quality meat with many European cuts [Onglet etc]. He supplies to all the top restaurants. We bought 2 Aberdeen Angus Hamburger pattys. These are made with two types of beef and about 20% fat is added into the grind. We cooked them with a dash of salt. My god they were absolutely fantastic. We made burgers. The crunch of the outside of the patty and the juicy moist inside and the taste. Really really top class.
We also did a evening walk to take a few photos of the Christmas lights. Quite pretty dont know if it translates onto film but then here it is. 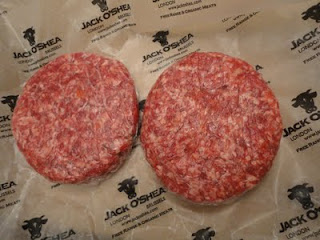 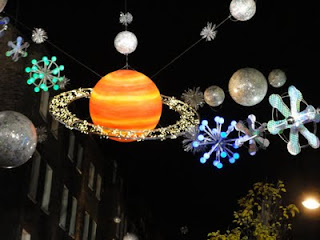 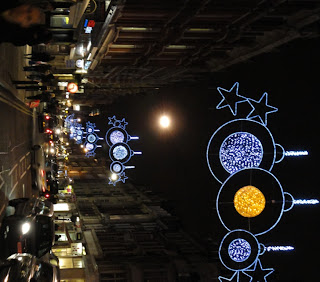 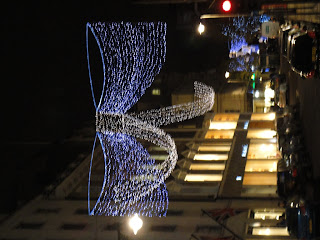 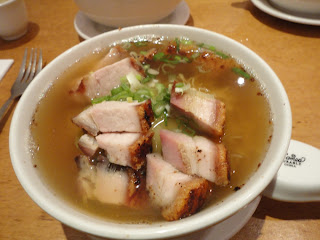 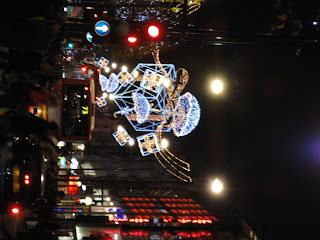 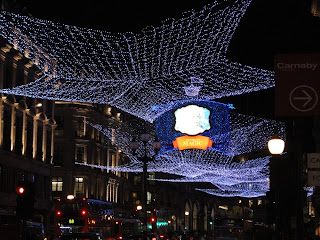 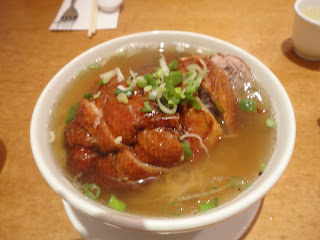 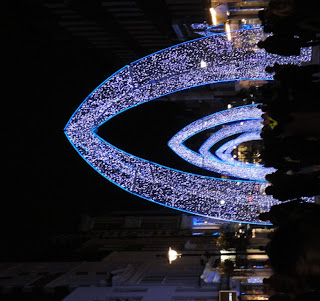 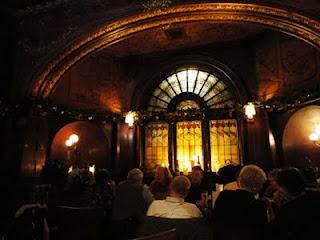 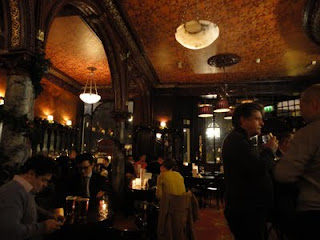 Posted by Stonethrowers Rants at 2:38 PM