We were to fly to Hong Kong en route to Macau on the day the Supreme Court pronounced the verdict on the Babri Masjid conundrum. We had a trouble free as well as traffic free ride to Sahar airport. The fear of Babri Masjid had driven the unwashed masses home, presumably to bathe.
We were flying to Hong Kong on Kingfisher. Since I first travelled abroad 25 years ago in 1985 I have never flown out of India on an Indian carrier. I always believe my journey abroad starts on entering an aircraft. Kingfisher belies my belief, its like never leaving India. The service is obsequiousness personified which I hate. One man obsequious is another man waiting for service. He who shouts loudest, is the most aggressive, who says “I know Naresh Goyal, Anil Ambani, Dr Mallya etc” gets the best service while the other who has only paid for his ticket has to wait. This was the first time I have heard the crew talking to the passengers in Hindi. I was shattered. Arti asked me if I would be as upset if an air hostess spoke to a German in German on a Lufthansa flight. I said no, and so my journey began... She proceeded to sulk.
The decor is Marwari Chic and the fellow travellers are guys I would never in my wildest dreams have a drink with, but, here I have to sit with them at the bar on the aircraft. The food was astounding in the worst possible way. A fish soup which I would stay miles away from. This would be replete with onion, fish, shellfish and tomato. Stomach curdling after having been cooked a few hours in advance passing thru a few heat cycles. No sense in getting food poisoned on board before starting a journey. The other non veg dish was Maharaja Platter which is a thaali. There were two veg dishes, Spinach and Ricotta crepes and a Veg Maharaja Platter. Arti and I both asked for the Spinach crepes only to be told they have only one on board. Arti got that. She craftily convinced me to have the Maharaja Non Veg Thaali. I might have been eating at Delhi Durbar. All that smelly masala, my God!!! My stomach was `mulmul-ing’ [to use a Marathi phrase] the whole night. One tip - carry lots of deodorant and mints when flying Kingfisher. I mean a Methi Paratha consumed in a closed aircraft for 6 hours can flatten a British immigration agent at 10 paces. No need for a visa. Just walk in after flattening the agent.
We landed at HK and swiftly and seamlessly took a ferry right from the airport terminal straight to Macau. No passing immigration, no handling bags, nothing. Seamless, painless and without speaking a word of Cantonese/Mandarin all this was achieved. Try taking a taxi from Bombay airport without speaking but just standing in line. In Macau we got into the hotel bus and lo and behold we were at the reception.
Now the real fun starts. Reception handles only check-out till 1pm on a good day and upto 3pm on a bad day. After that check-in starts. You simply cannot check in. There is no counter available for check-in. Try that in India. You will have `I know Ratan Tata, Ratan Keswani, Capt Nair etc’ thrown in and a sulking man. What a bloody cliché. We are driven by Hindi films and the attendant dialogues.
So we left our bags at the friendly luggage desk and went for a walk. What an astounding hotel. It is typical Las Vegas style with a few differences. The Hotel is a combination of two properties the Venetian and the Four Seasons. They must have between then at least 5000 rooms. The lobby/casino/shopping area is absolutely huge its 4,30,000 square feet. Gambling Chinese are all over. This was Arti’s first exposure to Las Vegas. She is stunned. The difference from Las Vegas was that there are no large, poor quality, huge quantity buffets and no cocktail waitresses getting you drinks. There are at least 30 restaurants on the premises not including the food court, but the seeming extravagance of America is thankfully missing. As are the themed shows that are so a part of the Vegas experience. Macau is based on gambling. There are many many casinos but unlike Vegas they are not in a strip but in clusters. In main Macau there were the Sands, Wynn, Mandarin Oriental, Grand Lisboa, etc. It’s quite astounding.
Finally we were checked in. Nice room. Like in India everything has to be paid for extra. Internet & breakfast. Such places need to be carpet bombed. The owners have to be sent to Western Europe for an induction course on reality. Charge 5$ more but give me ‘free internet’. Charge 25$ more but give me ‘free breakfast’. Boy this was the first time I missed having a blackberry phone. Cheap penny pinching bastards!!!. Thus ended our trip till check in. More later. 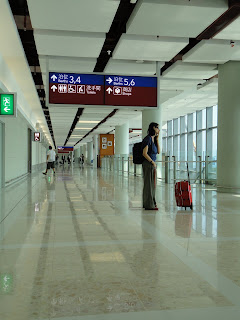 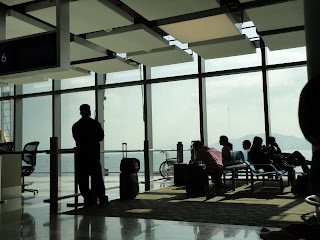 Posted by Stonethrowers Rants at 11:51 AM