London has three areas which have a large Indian sub continental concentration. Southall has a predominantly Punjabi population, be it the now Pakistani Punjabi or the Indian Punjabi. Southall is a mini Punjab. There are several Gurdwaras and street signs are bilingual – English and Gurmukhi. The film Bend It Like Beckham was based in Southall.

Wembley and its adjoining Neasden and Harrow are the homes of the Gujarati community. This includes the Guajarati’s that came to the UK from East Africa and Uganda. You have the BAPS Swaminarayan Temple, which I had written about earlier, in Neasden.

The third big concentration of sub continental Indians is found in the area around Brick Lane in East London. This is home almost exclusively to the Bangladeshi community from Sylhet. This is the home of so called `Indian Food’. Actually, it was mainly Bangladeshi food that was being served.

Let me give you a bit of a back story as to how we came to visit Brick Lane.

Borough Market is a produce wholesale and retail market that we have been visiting every time we are in London. It is a fascinating place and you can see the produce changing with the seasons. Over the past few years, we have been finding that our visits to Borough were getting more and more challenging and the pleasure we got from visiting it was fast diminishing. No, the reason was not `familiarity breeds contempt’ but, the simple fact that Borough became more and more and more crowded. It became the place to visit for everyone. So on Fridays and Saturdays, the day the market was fully open, you had absolutely hordes of people. To add to the tourists, a lot of the locals now come to the market to have lunch which they can buy from any number of vendors. Lines to get a burger or a roast pork sandwich or the famous Chorizo from Brindisa became longer and longer and unless you were willing to get your food at the unearthly hour of say 11.30am you had to stand in a queue to buy your lunch and be continually jostled by the people around. You know we will visit a market wherever we can find one. So with our pleasure diminishing, we researched and came upon Broadway Market in Hackney which was supposed to be excellent. Broadway Market is open on Saturdays.

Broadway Market is in Hackney East London just on the outskirts of `the City’. This area is also known as the East End. This was the area adjoining the old docks, so there is a high migrant population and the population is a diverse melting pot. The area was extensively bombed during WW II. This area remained relatively poor with higher crime rates and remains so even today. There has been a lot of development in the East End with the London Olympics being held here, the development of Canary Wharf and the huge Stratford Shopping complex. The East End was home to the Cockneys and the Pie Shops, though, all that has now generally changed. The fact does remain that the area is still relatively poor, quite poor, when contrasted with the West End.

We got onto the Tube and after a short 20 minute ride from Marble Arch we were at Bethnal Green the nearest Tube to Broadway Market. It was a further 20 minute walk to the market. Broadway Market is set up on a street which is closed to traffic. It is part market for produce and part flea market with all manner of rubbish being sold. The Brits do have this great affinity for antiques and you find all manner of them all around, clocks, medals, musical instruments, hats and God knows what else. This reminded me of Portobello Market at Notting Hill. There was no prettiness, just general urban decay. The produce stalls were disappointing with withered vegetables. I must confess that both of us were disappointed. Two bright sparks. We ate a nice Chorizo Scotch Egg [which we Indians know as Nargisi Kofta] which had a soft yolk and a Vietnamese Bahn Mi. Both were adequate.

When walking back to Bethnal Green we came upon a map which said that Brick Lane was short walk in the other direction. So, that is just what we did, we walked to Brick Lane.

Soon signs became bi lingual, English and Bengali, people’s clothes and colour and facial hair started changing. Gone were clean shaved men, gone were trousers and in were beards and Salwars for the man. Women were in Burkhas. 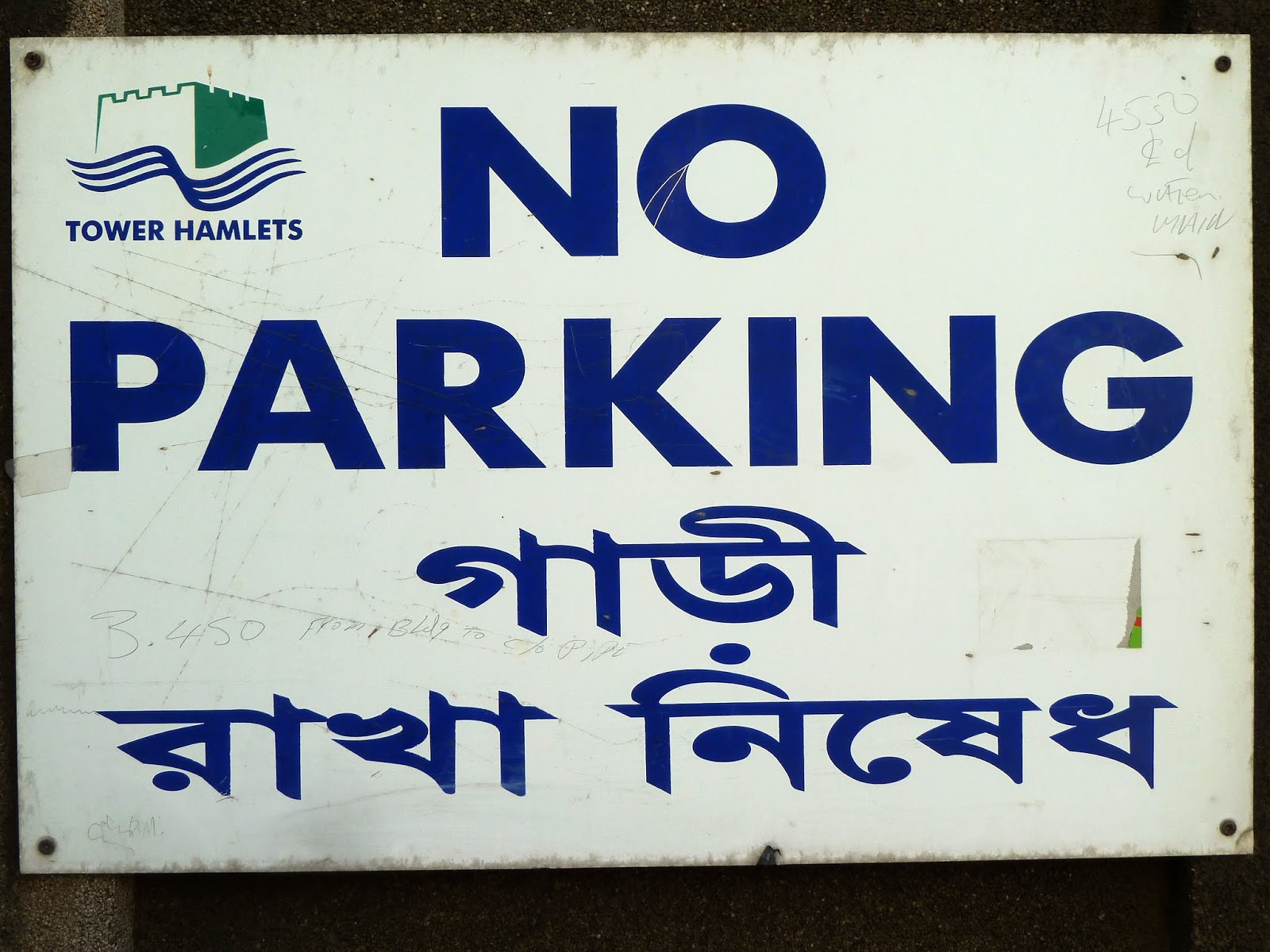 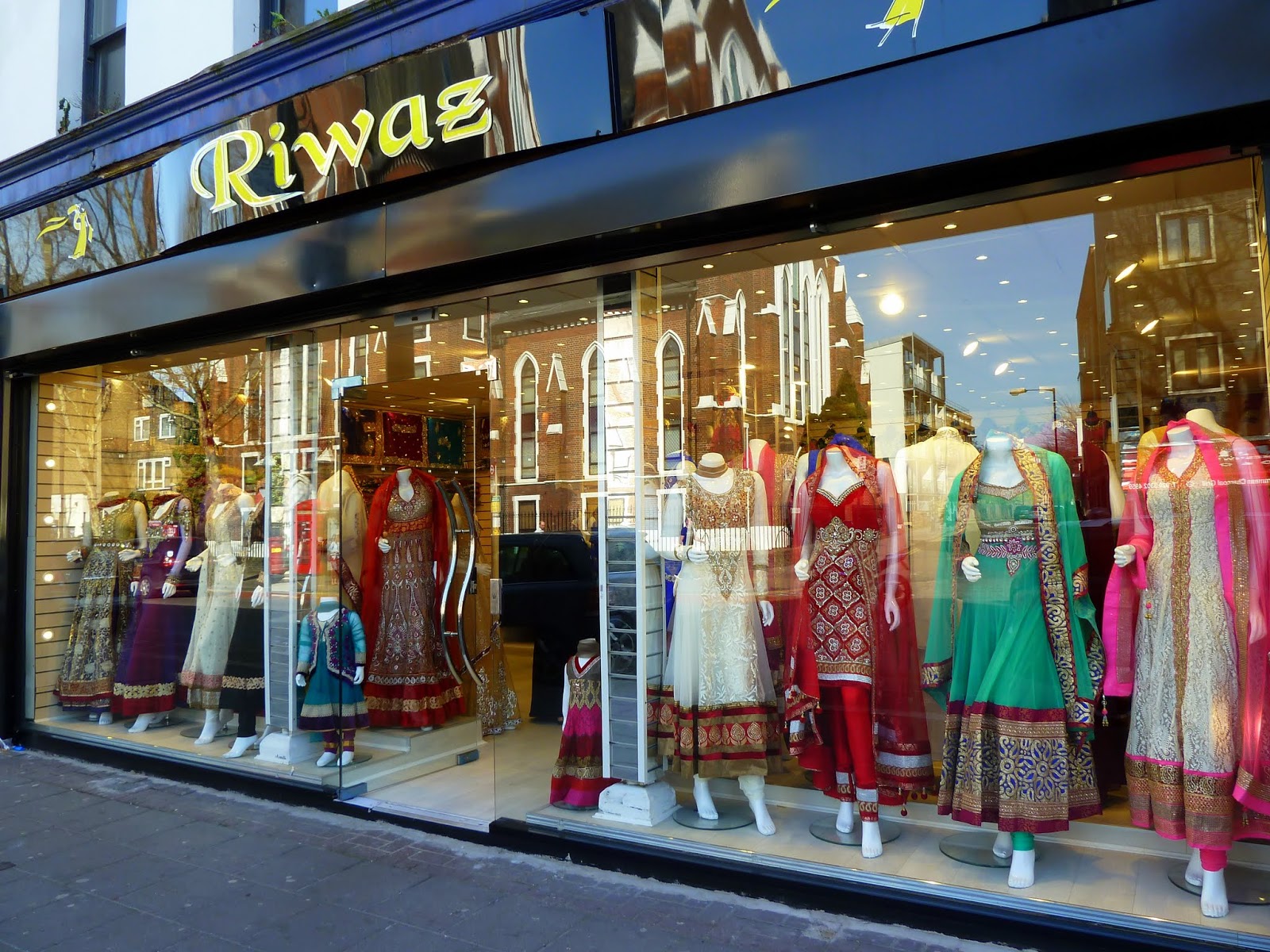 We were in the heart of Brick Lane, Bangla Town. The road was lined with Curry Houses, each with a sign outside saying `Masterchef’. Highly dubious self appointed accolades were printed on banners and festooned on the outside of the restaurants. At the entrances stood touts calling you to come in and eat. Some spoke in Hindi some in English. Juxtaposed in this row of restaurants were very edgy art galleries with very white Brits inhabiting them. 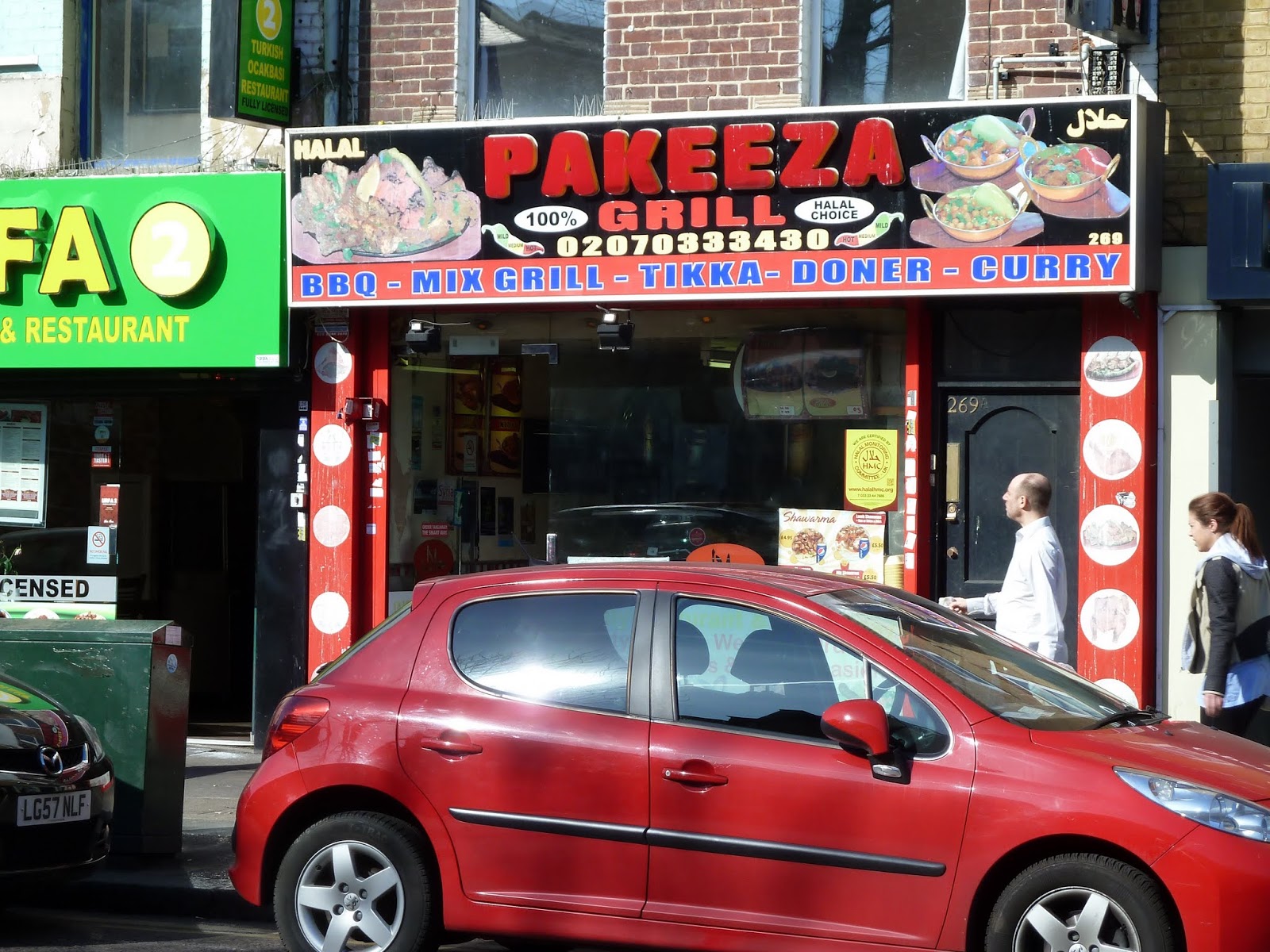 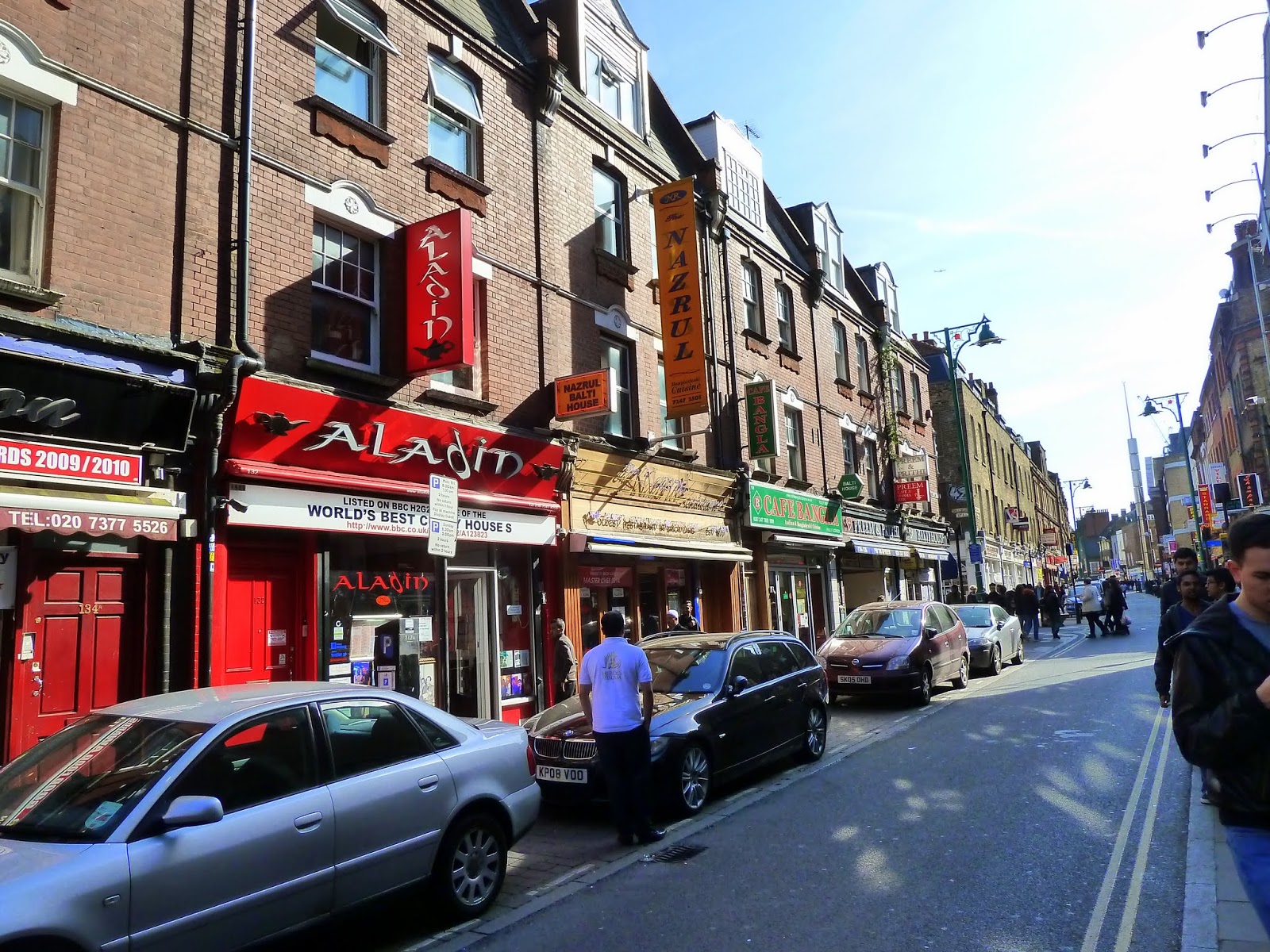 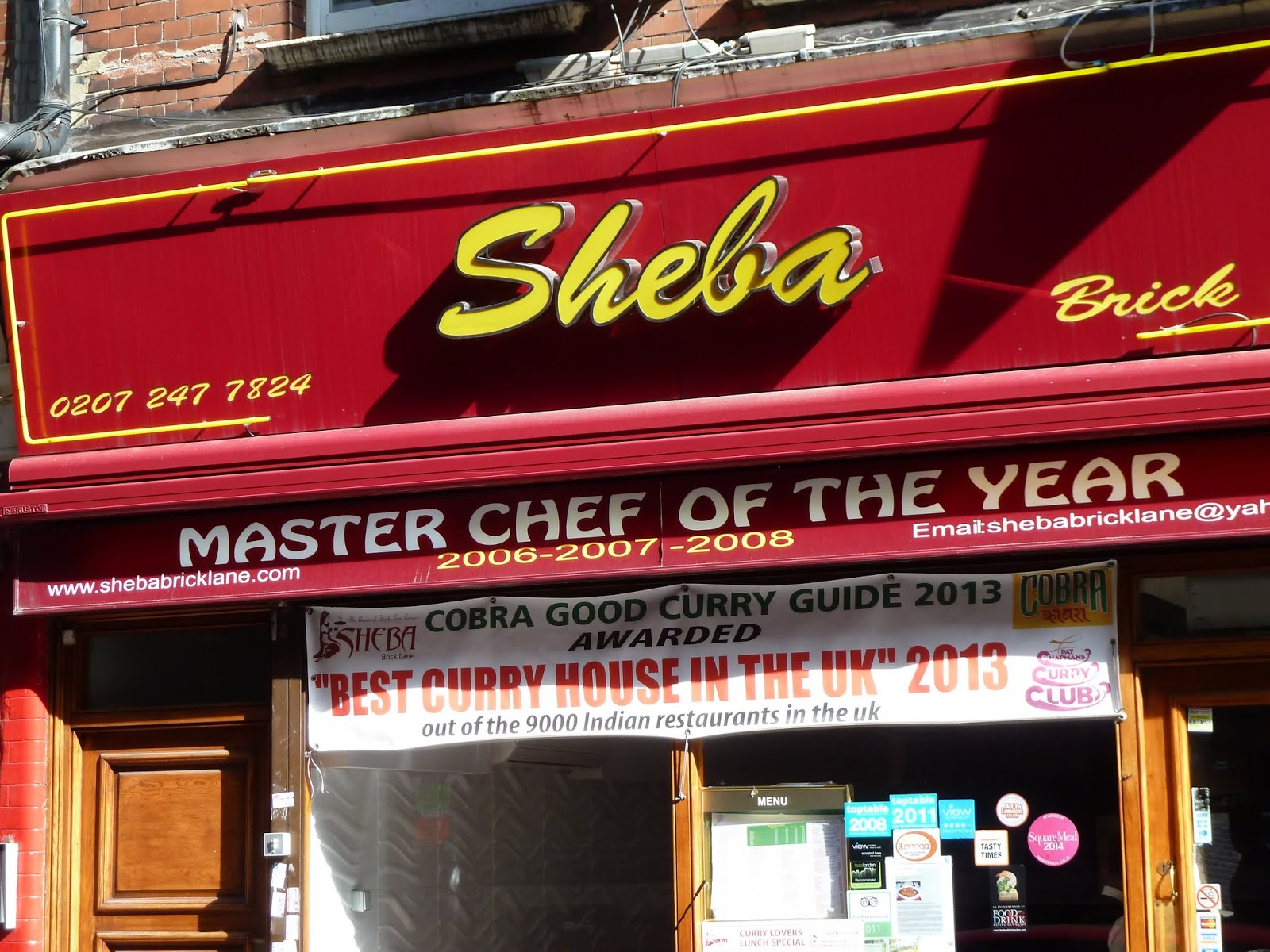 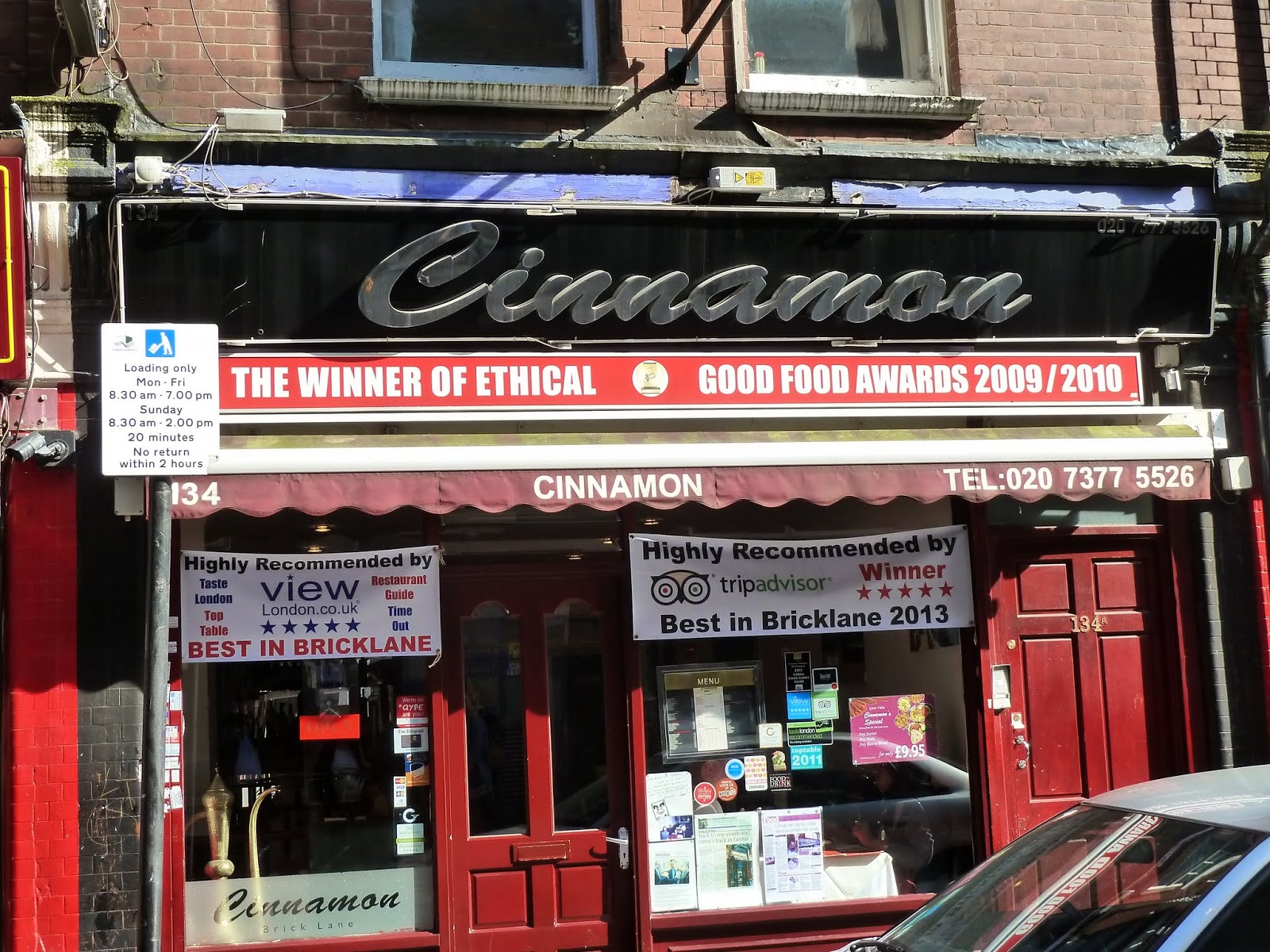 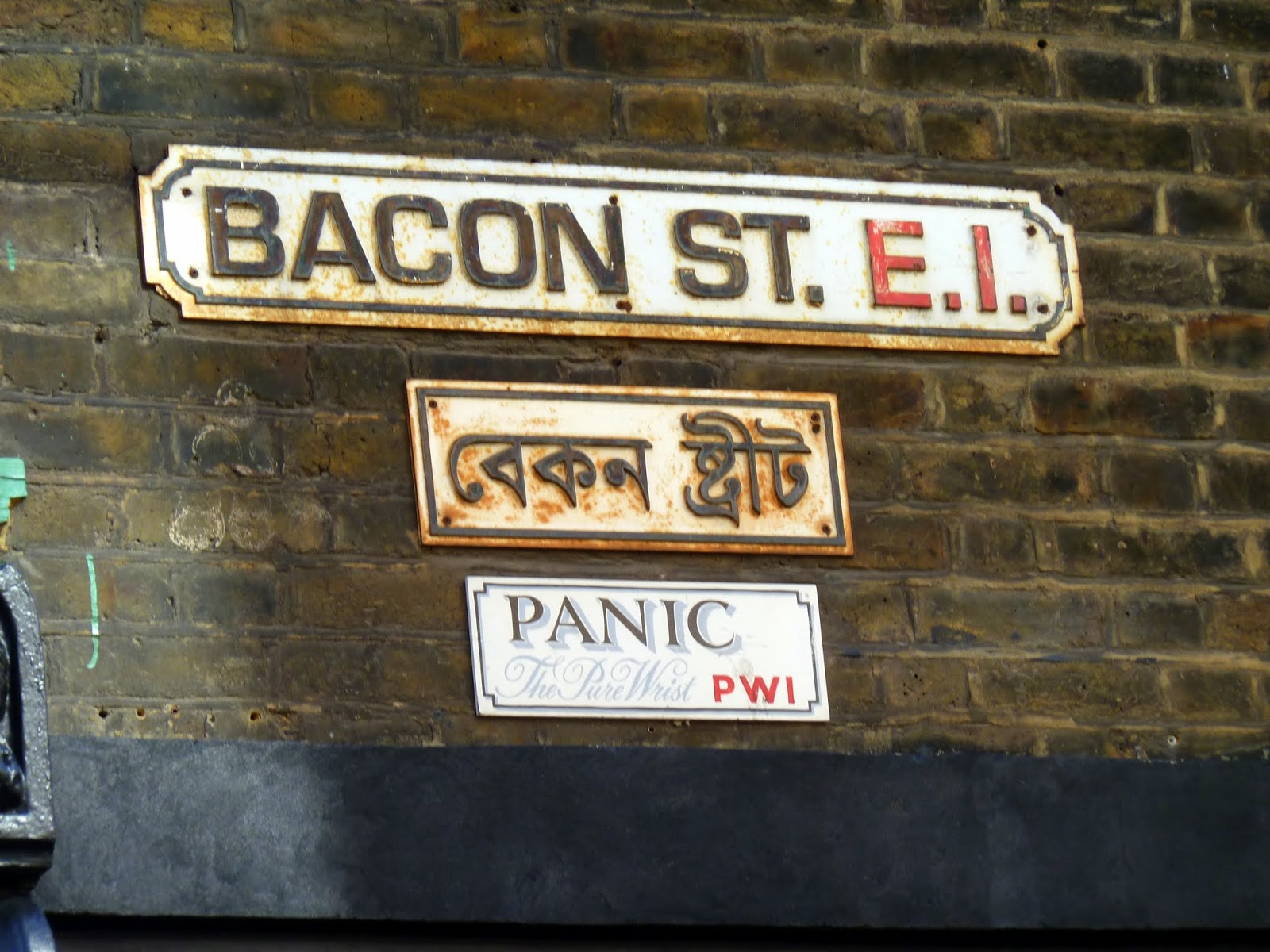 Along Brick Lane is an all purpose Asian store called `Taj’. We popped in. It was fascinating. All manner of packaged food, all types of Bengali River fish, prawns and lamb. Some totally unique items like a great Mortar and Pestle. We bought some Bhoot Julakia Pickle, I wonder who will eat it, and HRH the Queen bought some Karela seeds.

Once we exited we reached Aldgate East Tube station and took the tube back home.

That was a Saturday that was fascinating. A side of London that we rarely get to see.

Posted by Stonethrowers Rants at 2:06 PM